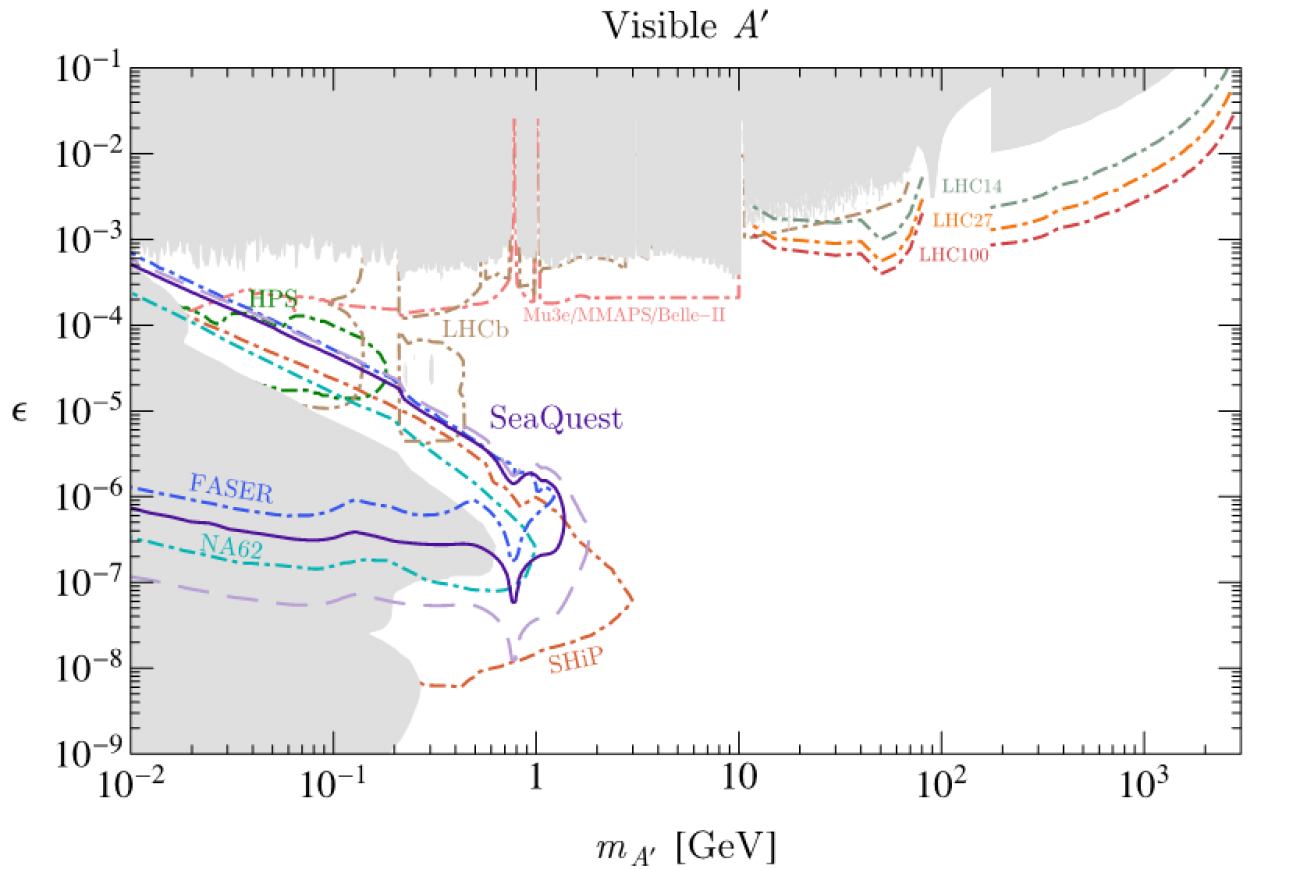 Cosmological and astrophysical observations indicate that the Standard Model (SM) particles account for less than 5% of the total energy density of our Universe, while the remaining unknown 95% arises from the so-called dark energy and dark matter (DM).

The existence of dark matter is inferred from its gravitational effects, but dark matter particles have never been directly detected, which makes their nature one of the most mysterious unanswered question in modern physics, calling for more investigations both in astrophysics and in high-energy physics.

The SM does not provide any good DM candidate. The existence of  DM provides therefore strong evidence for New Physics (NP) beyond the SM. The last decade has seen tremendous progress in experimental searches for DM in the form of weakly interacting massive particles (WIMPs) with masses of O (100 GeV), interacting with the SM particles through weak strength interactions. Searches include a broad range of experiments: collider experiments looking for invisible signatures, direct detection experiments searching for DM scattering in large detectors, and indirect detection experiments, seeking for DM annihilation products coming from the sky. The experimental precision has reached unprecedented levels allowing excluding certain DM candidates from interacting significantly with the Higgs, thus putting some pressure on the WIMP paradigm.

Rather than suggesting a specific mass scale for new physics, Dark Matter arguably points to a dark sector of particles not interacting through the known SM forces (electromagnetism, weak and strong interactions), and therefore only feebly-coupled to the SM.

Dark sectors could be non-minimal and, similarly to the SM, contain - in addition to the DM state(s) - new force carriers, new matter fields, and new dark Higgs bosons.

In addition to the DM motivation, dark sector models are also motivated by various collider related anomalies as, for example, the (g-2)m anomaly, as measured at Brookhaven National Laboratory in the early 2000s, and the B-meson anomalies recently seen by the LHCb, Belle, and Babar collaborations. Furthermore, dark sectors arise in many theories proposed to address the big open questions in particle physics: the naturalness problem, the problem of the baryon-antibaryon asymmetry of the Universe, the strong CP problem, to mention some.

These new dark particles could communicate to the SM through so-called “portals”: renormalizable interactions between a particle of the dark sector and a particle of the SM sector. There exist only three portals:

(1) the dark photon portal, thanks to which a new (generically) massive dark photon, A’, will mix with the photon and the Z-boson of the SM;

(3) the neutrino portal, thanks to which a new dark fermion (a sterile neutrino) will mix with the SM neutrinos.

In the next paragraphs we will discuss how future high-energy and high-intensity colliders can cover a unique role in unraveling the nature of DM and of the associated dark sector.

The Large Hadron Collider (LHC) can produce dark particles copiously, either directly through their portal interactions (e.g. a dark photon produced from quark-antiquark fusion thanks to its mixing with the SM photon and Z-boson) or, if sufficiently light, through Higgs decays.

The Higgs boson - discovered at the LHC after a decades long hunt for the last missing piece in the SM - might play a unique role in this context. It may very well interact with many types of massive particles, including the particles of the dark sector. The tiny SM width of the Higgs, Γh ~ 4 MeV, combined with the ease with which the Higgs can couple to NP, make Higgs exotic decays (i.e. Higgs decays to light dark particles) a natural and often leading signature of a broad class of dark sector theories [Curtin:2013fra]. The LHC data set collected so far is already able to test exotic branching ratios as small as ~ few*10-5 in the case of the cleanest decay modes (e.g. h -> X X -> 4μ, where X is e.g. a dark photon or a dark scalar). The High-Luminosity (HL) stage of the LHC will have the potential to improve the bounds on some of these branching ratios by ~ 2 orders of magnitude. Even tiny branching ratios might be discovered by the HL-LHC, if realized in Nature.

On the other hand, higher energy hadron colliders (like the HE-LHC, or 100 TeV proton-proton colliders) can probe very weakly coupled light dark particles. These new experiments offer in fact intensity-frontier studies of the Higgs particle. In the context of Higgs exotic rare decays, they could give access to tiny Higgs branching ratios (~ few*10-9 for the 100 TeV collider) for clean decay modes. Background limited signatures can also be accessible utilizing the sizable cross section of sub-leading Higgs production modes, as the tth production.

Complementarily, high-energy lepton colliders, like the International Linear Collider (ILC), CLIC, FCC-ee, and CEPC can offer a unique reach on dark sectors thanks to their low levels of backgrounds. For example, as studied in [Liu:2016zki], CEPC, FCC-ee and ILC can robustly search for all types of Higgs exotic decays, even those that are background limited at hadron colliders, at least to the part- per-mille level of branching fractions.

The BaBar experiment at the SLAC National Laboratory collided e+e− pairs, obtaining 530 fb−1 of integrated luminosity at a center-of-mass energy of ~10.6 GeV in its ~10 years of run, 1999-2008. Several dark sector searches have been performed for either visible dark particles (e.g. μ+μ- or e+e- resonances, 2μ+2μ- signatures) or invisible dark particles (mono-photon signature). Several of these searches set the most stringent constraints on dark particles, particularly in the mass region between few hundred MeV and a few GeV.

The next-generation B-factory experiment, Belle-II, has started colliding e+e- last year. This collider will collect ~ 50 times the integrated luminosity of the previous Belle experiment, as well as ~ 100 times the Babar luminosity. In addition to the larger luminosity, Belle-II has a more hermetic calorimeter and is developing targeted triggers to search for dark sectors. These unique features will warrant Belle-II an unprecedented reach for dark particles, possibly already with early data in 2019-2020.

In Fig.1, we present a summary of searches for visible dark photons. Several regions of parameters are probed by past experiments (in gray), or can be probed by present/future fixed target experiments (curves at low values of the portal coupling, ε) as well as by Belle-II (in light red), by LHCb (in brown) and by high-energy colliders (red, orange, and green curves at high mass). Interestingly enough, past experiments were able to probe the region of parameters favored by the (g-2)μ anomaly in this minimal dark photon model. 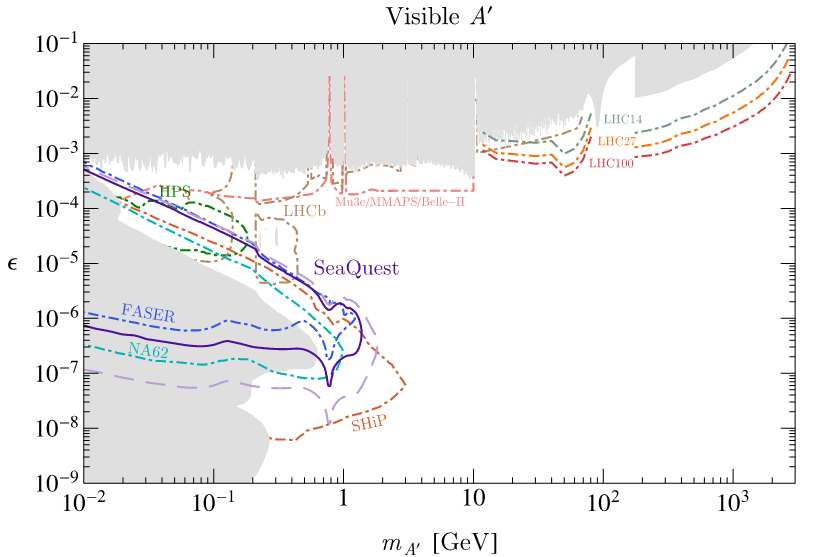 Figure 1: Reach for visible dark photons at past (in gray), at present/future fixed target experiments (curves at low values of the portal coupling, ε) as well as at Belle-II (in light red), at LHCb (in brown) and at high-energy colliders (red, orange, and green curves at high mass). Adapted from [Berlin:2018pwi]  (we thank A. Berlin for the figure).

Additionally, beam-dump and missing momentum experiments will be able to probe invisible signatures obtained from DM production and from the production of invisibly decaying dark particles: most regions of parameter space of thermal DM can be probed in the coming years by this experimental program (see [Akesson:2018vlm] for the LDMX proposal).

The search for dark matter and dark sectors at collider experiments is a broad and growing field that can lead to major milestones in our understanding of dark matter and beyond in the coming few years.  New experiments and measurements at the high-energy and high-intensity frontiers will provide a crucial test for many well motivated theories possibly leading to new discoveries and/or a paradigm shift in the way we tackle DM questions.