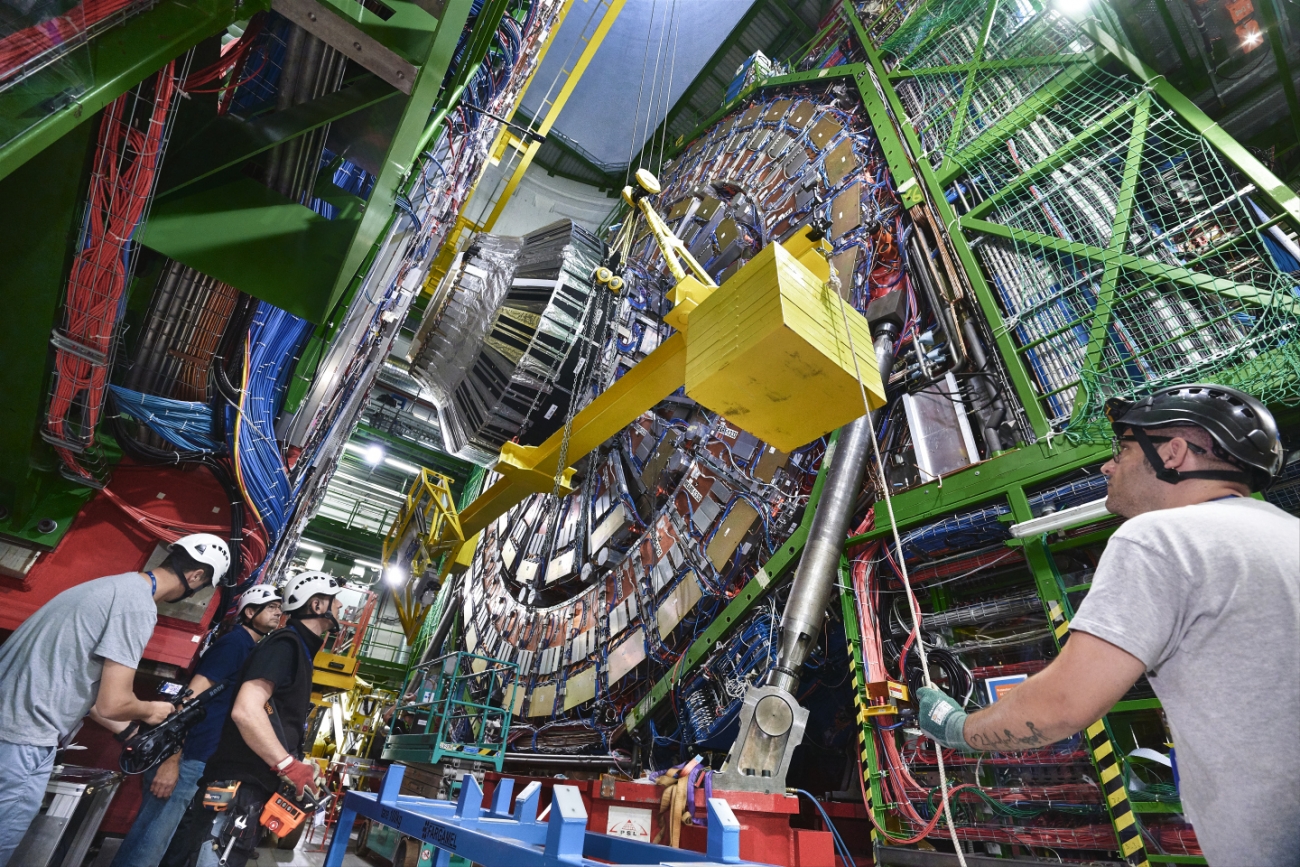 It can be called the achievement of the year for the CMS Muon GEM group, culminating on a decade-long effort and development of knowhow.

The Gas Electron Multiplier (GEM) is a Micro Pattern Gaseous Detector (MPGD) widely used in particle physics. They have been introduced into CMS by the author as part of a Technical Design Report approved in 2015 [1]. Around a decade ago, at about the time that CMS began collecting LHC collision data, it was decided to build a completely new Muon sub-detector, called GE1/1, to improve the muon-detection abilities of CMS in the High Luminosity LHC (HL-LHC) era. The GEMs will work together with the CMS Cathode Strip Chambers (CSC) to improve the muon tracking and triggering capability during HL-LHC that will begin operations after 2026, providing on average over five times more simultaneous proton–proton collisions than before. GE1/1 is the first of three GEM stations, two layer each, to be followed by to by GE2/1 and ME0, already installed in CMS, in the coming years, on time for the HL-LHC. Meanwhile the GE1/1 should already be operational for Run 3.

One of the particularities of the CMS GEM detectors lies in their size: they are more than a meter long, the largest GEMs ever built. After extensive R&D spanning several years, the first of the final production of CMS GEMs were assembled and tested at CERN’s Prévessin site in a dedicated fabrication facility and tested in the B904 CMS GEM Laboratory. By end of October 2019 the first half of GE1/1, made of 36 so-called super-chambers, was installed in the CMS experiment. The installation of the last super-chamber was immortalized by the first ever 360 degree live event from CERN [2]. Immediately afterwards, the GEM team started the first electronics tests to establish the communication between the detectors and the CMS Control Room thus starting the commissioning while completing the assembly of the second half of GE1/1 at the Prévessin site. 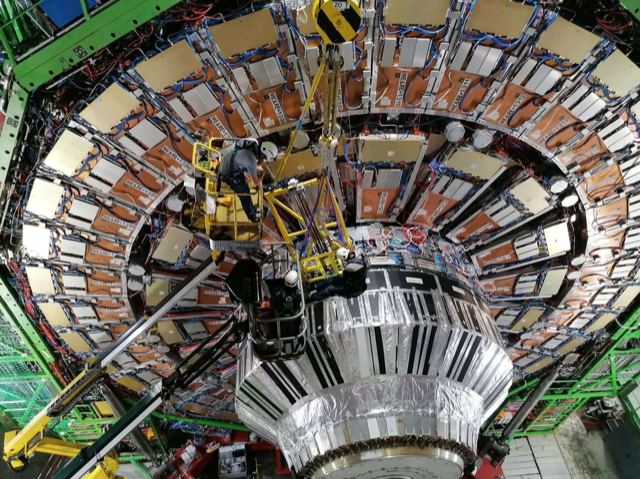 GE1/1 chambers being installed in CMS thereby completing the installation of the first station by Michele Bianco, Antonio Conde Garcia and Stephane Brachet of the EP-CMX Group.

Despite the lockdown, the CMS GEM team managed to complete the assembly and the qualification of the last super-chambers before the summer of this year. Over the summer, under challenging circumstances, working against odds and with a limited crew, the team steadily pursued the installation of the 2nd half of the detectors until the completion of GE1/1 on September 16, 2020. This is an important milestone for the full CMS collaboration since it represents the first complete Phase II Upgrade detector, with a brand new detector technology, the GEMs, complementing the Muon system. 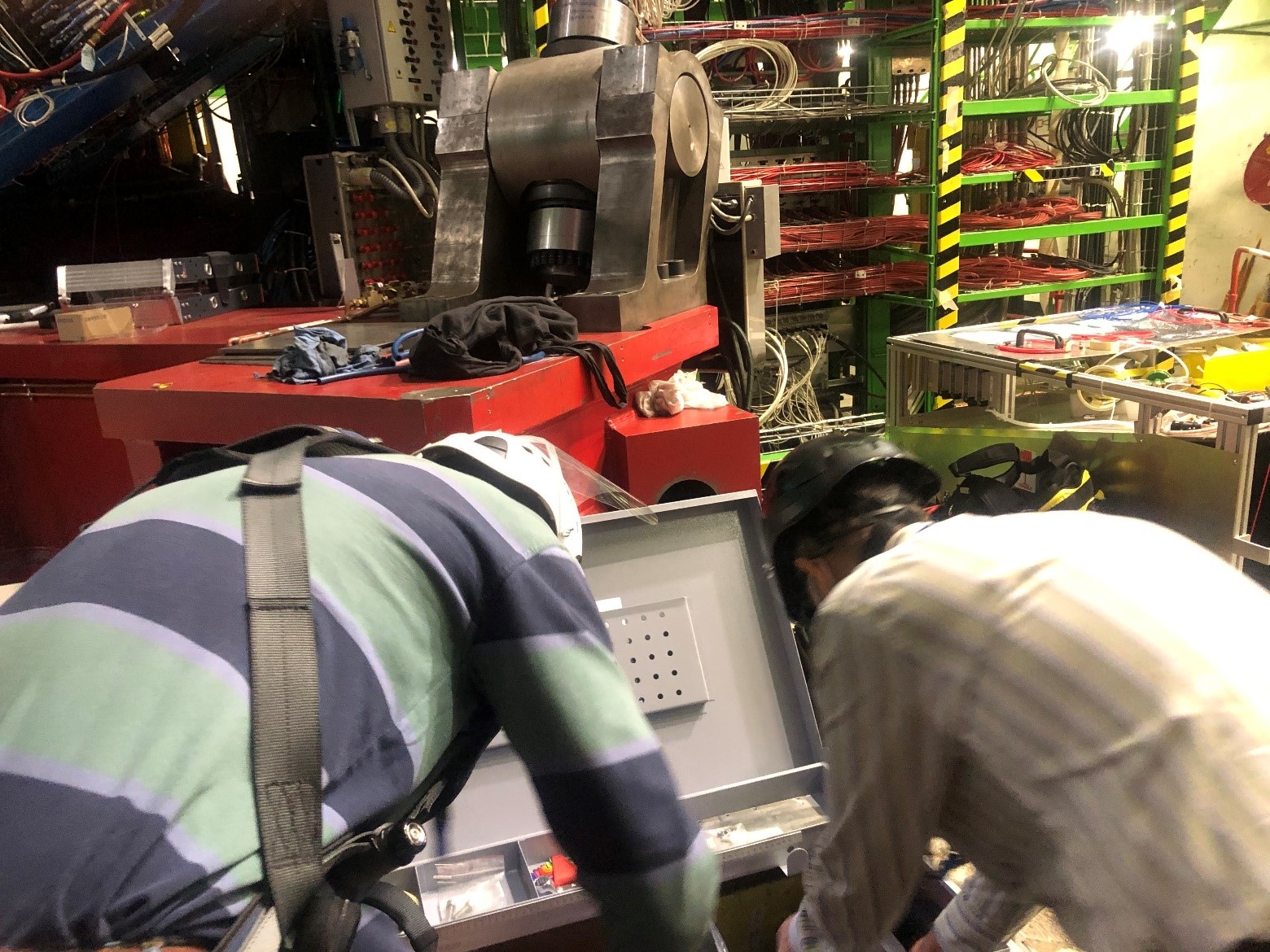 Making sure everything fits! 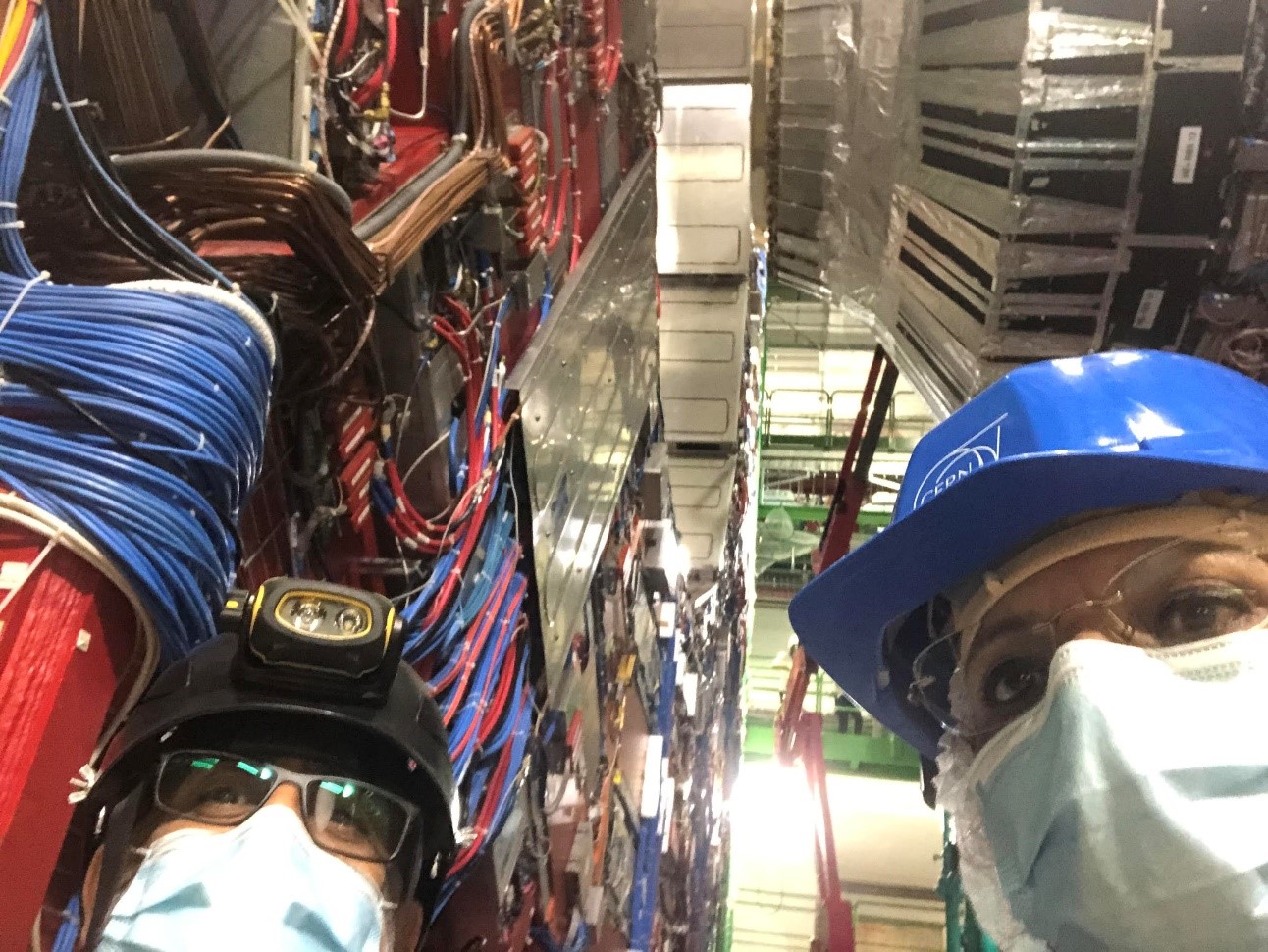 Final steps of installation for GE1/1. 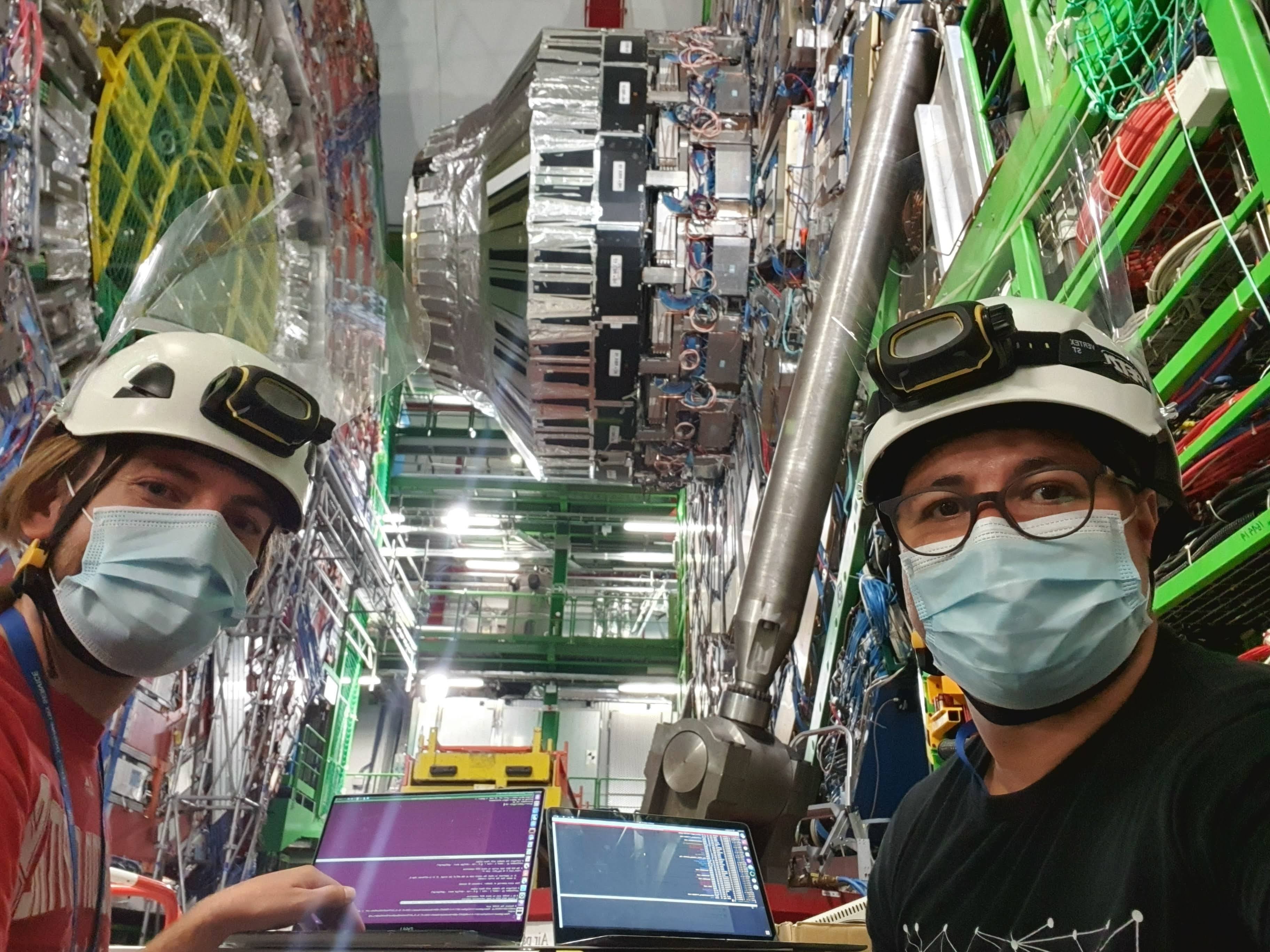 Pre-commissioning tests were carried out at the cavern floor.

In spite of the progress made so far, there can be no room for complacency for the GEMs, with their commissioning starting right away. Besides the daily standalone tests of the detectors and the electronics, the GEMs regularly participate to CMS-wide global runs, during which all the sub-detectors work together as in normal LHC operation, with the difference that here the detectors record muons coming from the cosmic rays instead of coming from the LHC collisions.

After installation the focus moved to ensuring that we were able to have the Data Acquisition System operational and the teams continued to work despite the challenges that COVID19 threw at us. The crew was finally able to debug the system and participate in the last two “CMS Midweek Global Runs” and record the first muons. 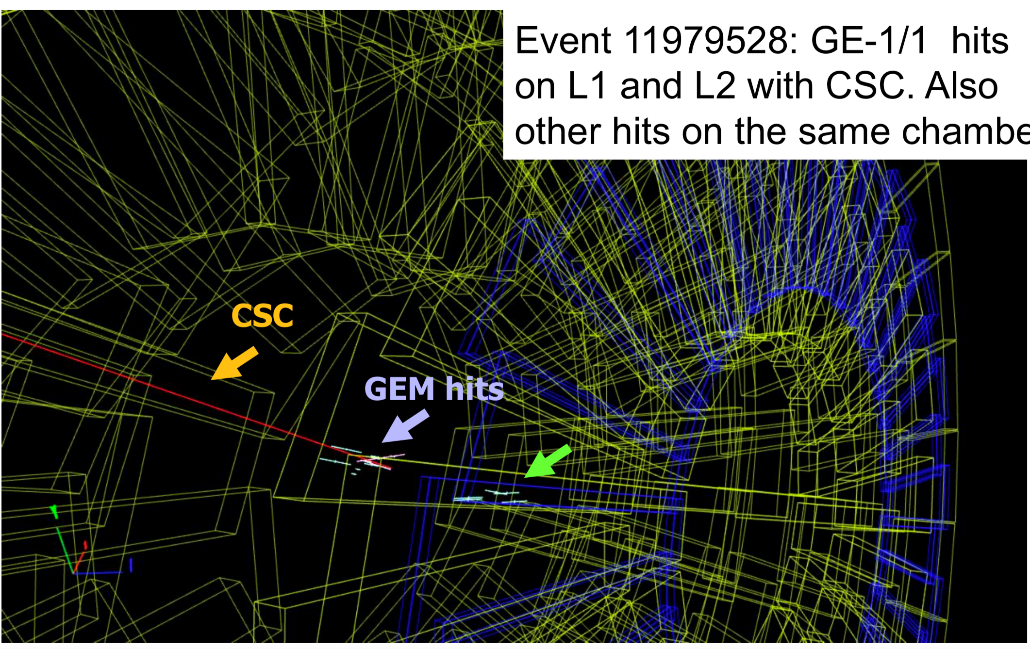 While the commissioning has just begun, the newly installed GE1/1 system has already “seen” its first particles.  After this (in many ways) exceptional year, the CMS GEM team has now another year to fine tune the configuration of the system to be ready for Run 3.

After a decade of R&D, production, assembly, qualification and installation, the CMS GEMs are definitely changing gear. Around 40 Institutions from 17 countries have participated in this project which holds a lot of promise towards the future production and installation of the remaining two stations in the coming years, and towards a truly consolidated “M” in the CMS Experiment.