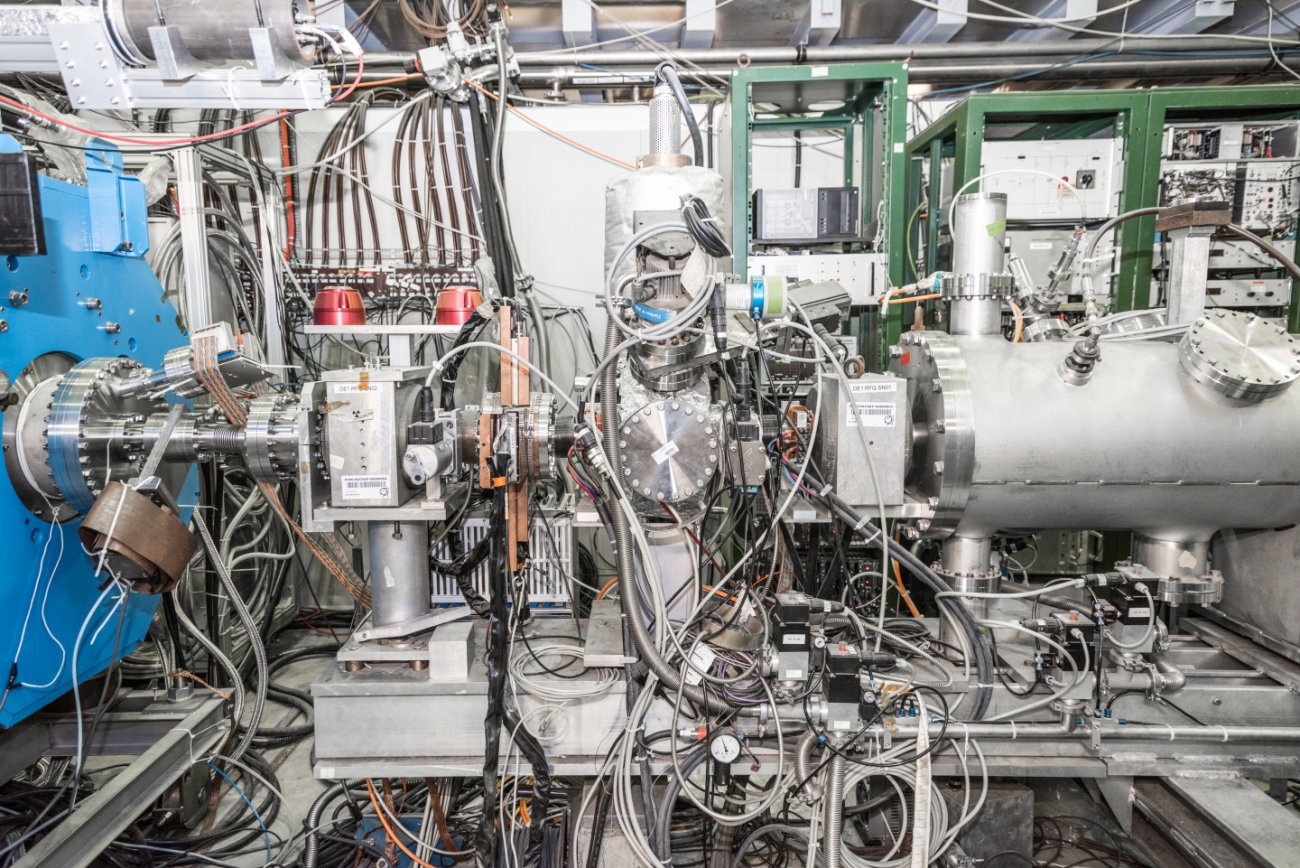 When atoms are immersed into liquids, their atomic spectral lines at visible wavelengths become greatly broadened compared to those of single, isolated atoms. A million-fold increase in the linewidth is often observed, which obscures spectroscopic structures and prevents high-resolution optical spectroscopy. In fact, the distortions are often so strong that it is difficult to identify the variety of atom that is dissolved in the liquid. The broadening occurs even when superfluid helium, which is the most transparent, cold, and chemically inert liquid, is used as the host material.

The ASACUSA experiment at the Antiproton Decelerator (AD) recently synthesized an exotic helium atom containing an antiproton, and immersed these so-called metastable antiprotonic helium atoms (symbol  pHe+) into liquid helium [1]. The pHe+ atom consist of a helium nucleus, an electron in the 1s ground state, and an antiproton occupying a Rydberg orbital with a large principal quantum number of n ≈ 38 and orbital angular momentum quantum number of l≈37. When the atoms were resonantly excited by highly monochromatic laser beams, sharp spectral lines corresponding to the atomic transitions involving the antiproton were observed, despite the fact that the  pHe+ resided in a dense matrix of helium atoms. An abrupt reduction in the linewidth of the antiprotonic resonance was seen when the liquid surrounding the pHe+ cooled and transitioned to the superfluid phase. The visible-wavelength spectra of this half-matter, half-antimatter hybrid atom thus became sharper than those of many normal atoms that were similarly embedded in superfluid helium. This unexpected effect may open several avenues of research in particle physics, condensed matter physics, or even astrophysics. The result also has implications for a sister laser spectroscopy experiment on pionic helium atoms carried out at the Paul Scherrer Institute by members of ASACUSA [2], which may potentially improve the precision of the negative pion (π-) mass [3].

ASACUSA has measured the transition frequencies of  pHe+ atoms by laser spectroscopy for many years. This allowed the mass ratio between the antiproton and electron to be determined with a precision of 10 digits [4-6]. The predictions of quantum electrodynamics (QED) and CPT symmetry were precisely tested in this bound system consisting of a hadron, an antihadron and a lepton. The experimental results also yielded some upper limits on any hypothetical fifth force that may arise between the constituent antiproton and helium nucleus at atomic length scales of 10−10 m [7-10], and exotic interactions mediated by undiscovered bosons [11]. The collaboration is currently attempting to further improve the experimental precision. Similar tests of the fundamental symmetries of the Standard Model using atoms and molecules, optical clocks, or quantum computing carried out at CERN and elsewhere have relied on the observation of sharp spectral lines. In the past, this sharpness has typically been achieved by carefully levitating samples of ultracold atoms or molecules in magnetic traps, or producing atomic beams which were interrogated by laser beams. For this, researchers at the AD and ISOLDE facilities have developed sophisticated methods to decelerate atoms and ions containing antiprotons or radioactive nuclei in either ultrahigh vacuum or dilute gas targets. The new ELENA storage ring represents the latest step, in which beams of 100 keV antiprotons that circulate in the machine are cooled by an electron beam to an unprecedentedly small emittance. Such techniques are especially crucial for experiments involving antiprotonic atoms and antihydrogen, since collisions with matter atoms would normally lead to the annihilation of the exotic atoms via the strong interaction within a picosecond, well before they could be carefully studied. ASACUSA’s new result is unexpected since it shows that high-resolution spectroscopy of an antiprotonic atom embedded in liquid helium is in fact possible.

Starting in the 1980’s and 90’s, various methods were developed to implant normal atoms into superfluid helium, based on the expectation that the distortions of the atomic spectral lines in such an ideal liquid would be small.  Measurements quickly showed, however, that the visible-wavelength spectral lines involving the outermost orbitals of alkaline, alkaline earth, and lanthanide atoms are asymmetrically broadened by a factor of more than a million. Other specific lines of thulium, europium, copper, gold, and dysprosium atoms showed much narrower widths with additional wing structures that were located several hundred gigahertz away from the main spectral line.  All these impurity atoms are believed to reside in bubble-like defects of 1-nanometer-scale diameters that form in the liquid. Laser excitations cause the bubbles to expand by more than 10%. Some vibrations that occur on the bubble surface are damped as phonons are emitted into the surrounding liquid. This is believed to cause the smearing in the optical spectra. By comparison, the electron shell of the pHe+  atom (see Fig. 1A) retains a radius of approximately 40 picometres throughout the laser excitation, which is an order of magnitude smaller than the above-mentioned impurity atoms. We may thus expect to observe spectral lines that are quite different from those of normal atoms.

In the ASACUSA experiment, a beam of antiprotons was slowed down by allowing it to traverse a 3-m-long device called a radiofrequency quadrupole (RFQ) decelerator (see Fig.1D). The MeV-scale antiprotons that emerged from the RFQD were allowed to come to rest in either a gaseous or liquid helium target, thereby synthesizing the pHe+  atoms. By firing laser beams with wavelengths of 726 nm or 597 nm and hundred kW-scale peak power at the atoms, two atomic transitions in the antiproton orbital were resonantly excited (Fig. 1B). This triggered a so-called electromagnetic cascade, or sequence of deexcitations in the atom, which terminated with the antiproton being absorbed by the helium nucleus. The resulting spike in the rate of antiproton annihilations signaled the resonance condition between the laser beam and  pHe+ atom (Fig. 1C).

Figure 1: Radial distribution functions of the antiproton (red curves) and electron (blue curves) for two states of a pHe+ atom (A). Energy level diagram of pHe+  indicating the positions of two laser transitions observed by ASACUSA (B). Signal corresponding to the time distribution of pHe+ annihilations, with the laser resonance induced at t ≈ 1.4 µs (C). Experimental layout (D). From Ref. [1]

The spectra measured in a dilute gas target with a pressure of 0.1 kPa and temperature of 1.6 K (indicated by grey points in Fig. 2) clearly resolves the hyperfine structure which arises from the spin–spin interaction between the electron and antiproton in pHe+ as two distinct peaks. When the target pressure was increased by more than three orders of magnitude, however, the elevated rate of collisions between pHe+ and normal helium atoms shifted the resonance centroid and broadened the linewidth. At still higher pressures, the broadening became so great that the hyperfine structure could no longer be resolved, until eventually the spectral line itself could not be clearly seen.

Figure 2: Spectral lines of antiprotonic helium atoms measured in gaseous and supercritical helium (green data points) at various target pressures show progressively larger shifts and broadenings relative to the data measured in low density gas (grey). Spectral lines observed in liquid helium (blue) became narrower as the temperature was reduced. A rapid reduction of the linewidth below the superfluid transition temperature revealed the hyperfine structure, with the sharpest lines observed between temperatures of 1.8 K and 1.9 K (red). From Ref. [1].

We thus expected that almost no signal would be observed in liquid helium. To our surprise, the spectral line (blue points) instead became distinctly sharper despite the higher atomic density of the liquid. An abrupt further narrowing (red points) was observed below the superfluid phase transition temperature of 2.18 K, which revealed the hyperfine structure with a high spectral resolution of two parts in a million. Several theoretical groups in Bulgaria, Poland, and Switzerland are currently attempting to understand the reason for this effect.

The result implies that other helium atoms containing antinuclei, as well as negatively-charged mesons and hyperons that include strange quarks, may similarly be formed in superfluid helium and studied by laser spectroscopy with a high spectral resolution. Although these particles are routinely produced at CERN in high-energy collisions, their lifetimes are so short that the particles cannot be cooled and decelerated using synchrotrons as in the antiproton case. Atoms containing these short-lived particles can only be produced by allowing the particles to rapidly come to rest in targets of high density. The exotic atoms formed in this way are normally destroyed by collisions with the surrounding normal atoms. This is an important reason why mesonic or antinuclei atoms have not been previously studied by laser spectroscopy.

Nevertheless, ASACUSA recently achieved the first laser excitation and spectroscopy of a mesonic atom at PSI using the above methods developed at CERN [2]. In the PSI experiment, a beam of π- supplied by the 590 MeV ring cyclotron facility was allowed to come to rest in a superfluid helium target. A three-body pionic helium atom composed of a helium nucleus, an electron occupying the 1s orbital and a π- in a Rydberg orbital was formed. By irradiating the atoms with an infrared laser beam, a broad laser resonance with a relative resolution 6 × 10−4 was observed (see Fig. 3) . This method thus enables the use of quantum optics techniques to study mesons. 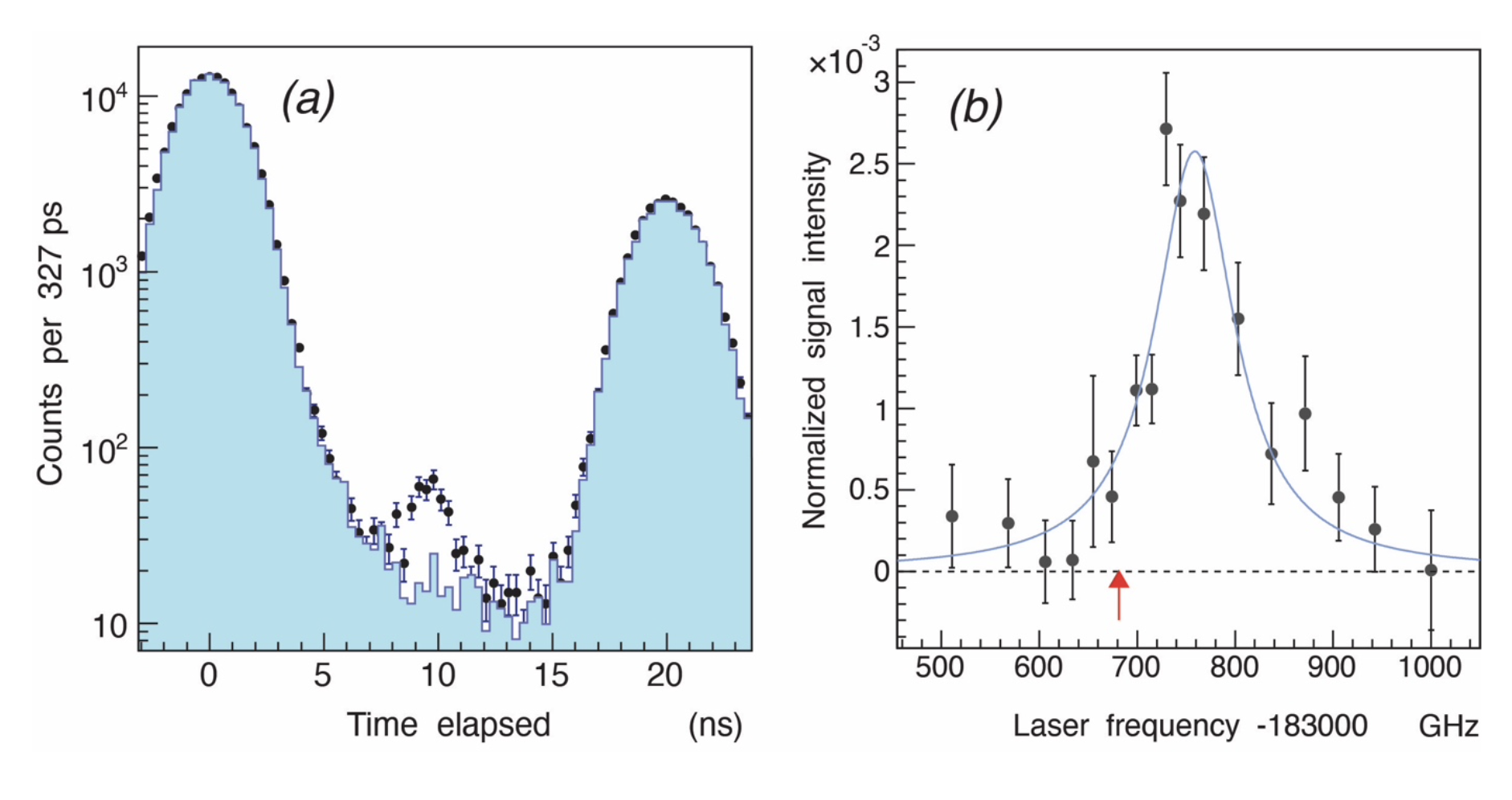 Fig. 3: Results of laser spectroscopy experiments of pionic helium atoms carried out by members of the ASACUSA collaboration using the 590 MeV ring cyclotron facility of PSI. Time spectra showing the decay of pionic helium atoms measured with (indicated by filled circles) and without (blue histogram) the laser irradiation (a). The peak in the former spectrum at t = 9 ns corresponds to the laser excitation of the atom. Spectral profile of the laser resonance of pionic helium (b). From Ref. [2]

The latest ASACUSA result implies that other spectral lines in pionic helium may in principle be observed with much higher resolutions. A theoretical collaboration recently calculated the transition energies of pionic helium with parts-per-billion scale precision using sophisticated three-body QED calculations [3]. This corresponds to a precision that is 3 orders of magnitude higher than for the known mass of the π-. By comparing the measured transition frequencies of the atom with the results of theoretical calculations, the π- -to-electron mass ratio may in principle be determined with unprecedented precision, as ASACUSA has done for the antiproton-to-electron case.