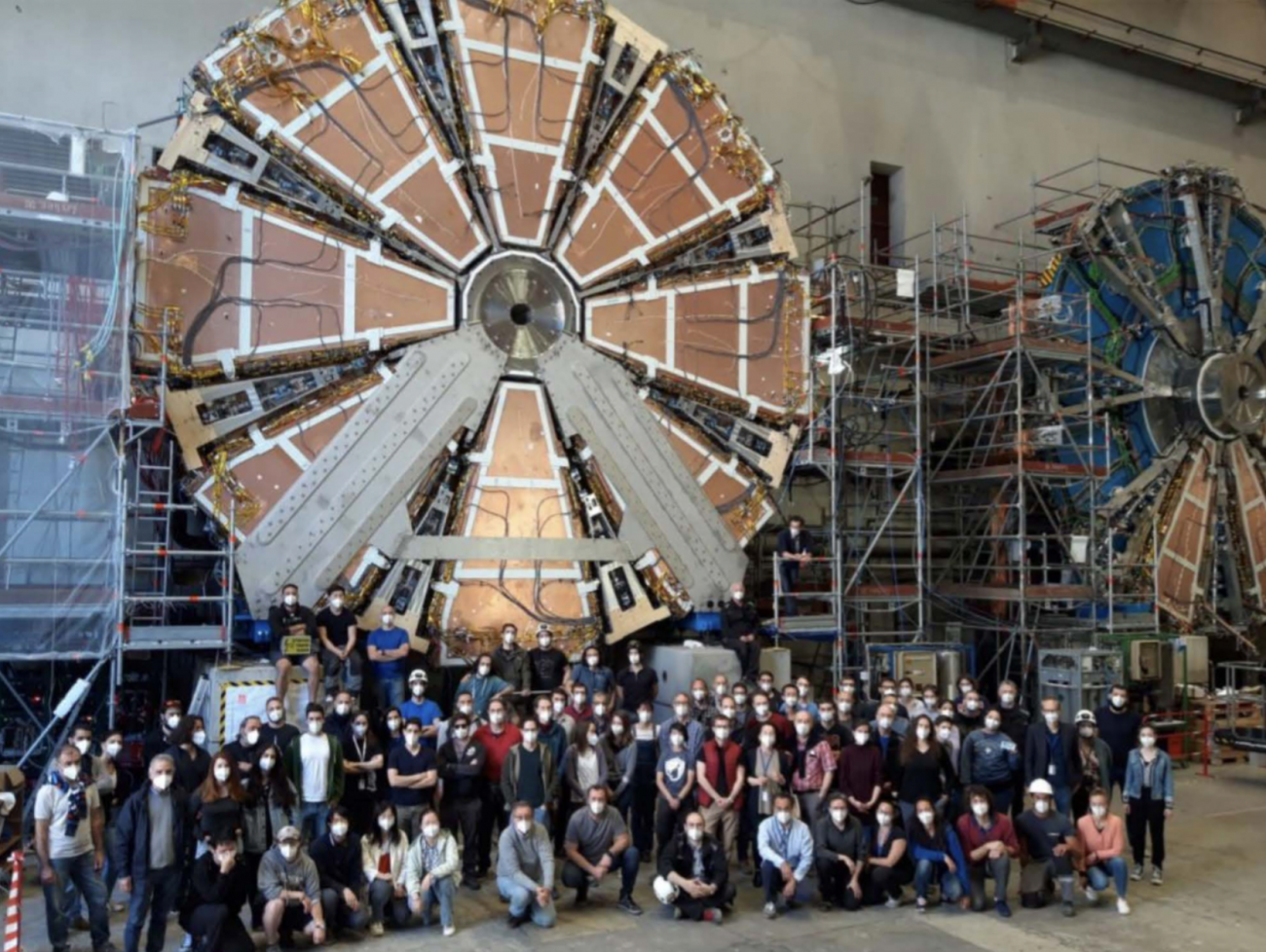 Group photo after the installation of the last sector of NSW-A. On the right is NSW-C with the first three sectors installed at the time.

The New Small Wheel (NSW) upgrade is an ambitious project that aims to allow, along with other upgrade projects, to track and record data with high efficiency in the harsh operating conditions of the High Luminosity LHC runs.

An important milestone for the ATLAS upgrade project has been achieved: both wheel of the forward muon spectrometer required to cope with the increase in luminosity foreseen in the upcoming phases of the LHC data taking have been completed. 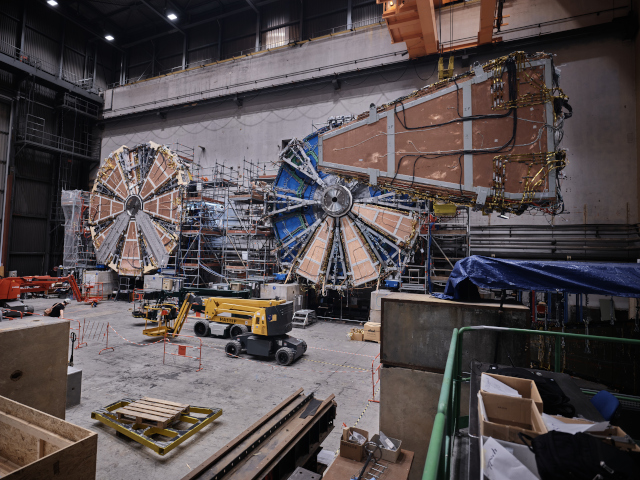 The wedge is lifted up and over to the other side of the construction hall. Both New Small Wheels can be seen: the wheel on the left was installed into side-A of the ATLAS cavern this summer, the wheel on the right will go to side-C during September. (Image: CERN)

The ATLAS New Small Wheel (NSW) muon detector upgrade program is currently the largest upgrade for ATLAS phase I, in order to meet the extreme requirements of Phase II of the High Luminosity LHC. It consists of a new set of precision tracking detectors based on the Micromegas technology and new trigger detectors Small Strip Thin Gap Chambers. The ATLAS NSW is a collective effort, involving numerous ATLAS institutes from around the world. The timely completion of the upgrade schedule was made possible thanks to their dedicated support to the NSW project over the course of several years. 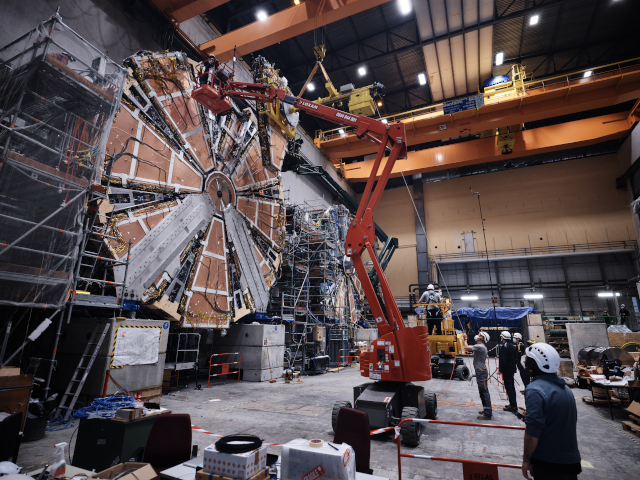 The wedge is lifted up to position, with scientists on cherry pickers alongside. (Image: CERN)

The successful outcome came after the restart of activities in summer 2020, despite the challenges that had been previously reported in EP newsletter and in line with the revised timeplan. 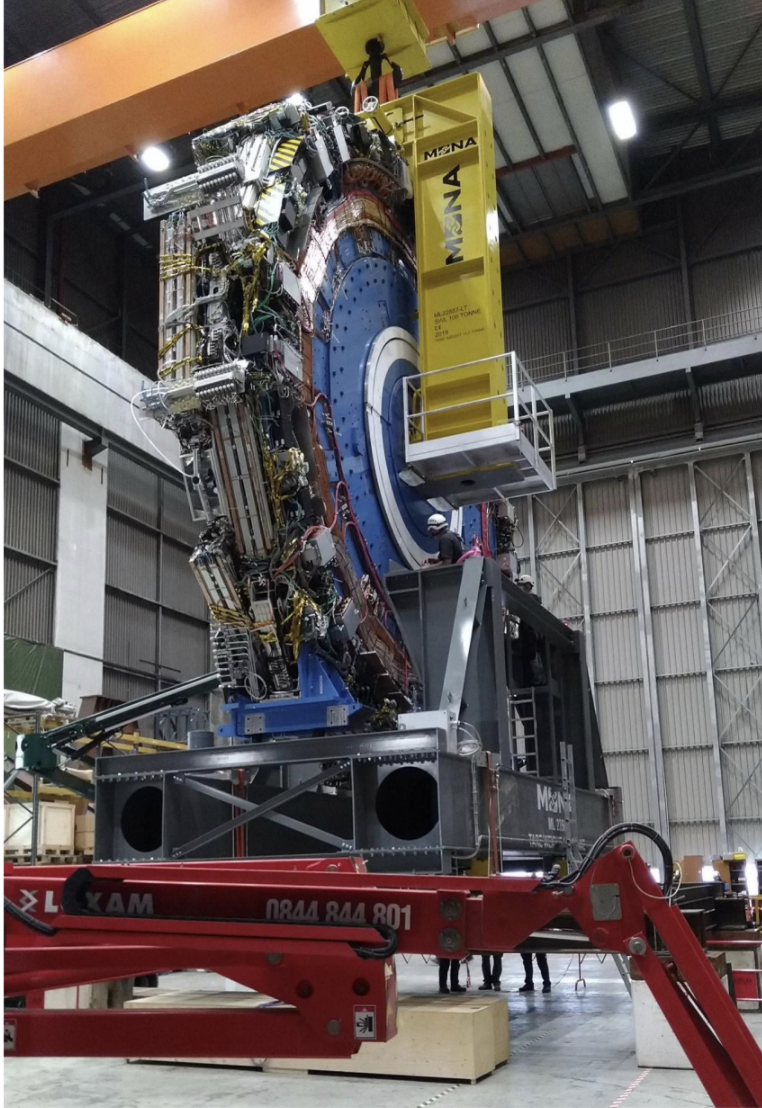 The NSW-A on the lifting tool ready to be transported to the ATLAS
cavern (Image: INFN)

On Friday 28 May 2021, the last of the sixteen wedges that make up the first New Small Wheel (NSW-A) was installed [read more] and later the New Small Wheel_A was installed in the ATLAS cavern on the 12th of July, replacing the Small Wheels detectors that are currently covering the endcaps of ATLAS detector.

The second new small wheel  (New Small Wheel C) was also completed on 27th of September and will transported on October 11 to point 1; a huge success given the complexity of the project, its large scale (1280m2) with more than 2.5 millions of channels, as well as the great obstacles that had to be overcome.

Following the successful completion of installation the first New Small Wheel has started final testing and commissioning pending for autumn. Stay tuned for more news in the next issue of the EP newsletter.