The ATLAS New Small Wheel (NSW) upgrade is an ambitious project that will allow exploiting the physics opportunities of the HL-LHC. Last November, the second -and final- NSW was installed in the ATLAS detector, marking the successful outcome of nearly ten years of design and development. The completion of the NSW installation marks a major milestone in LHC’s high-luminosity era. The ATLAS New Small Wheel (NSW) muon detector upgrade program has been one of the largest upgrades for ATLAS phase I in light of the HL-LHC. The NSW detectors will be instrumental in Run 3 data-taking, as a moderate increase in luminosity is already planned for the LHC

The construction of the NSWs is a global endeavor involving many ATLAS institutes from around the globe. The design of the detector technologies is based on previous long-standing efforts demonstrating the value of long-term investment and planning on new detector technologies. The NSWs consist of eight layers each of Micromegas and small-strip Thin Gap Chambers (sTGC), both providing trigger and tracking capabilities, for a total active surface of more than 2500 m2. It represents the first system with such a large-size coverage based on Micro Pattern (Micromegas) and wire detectors (sTGC). The concept of Thin Gap Chambers (TGC) was developed in 1983 and then used at OPAL and in the ATLAS end-cap muon trigger system while the MicroMegas detectors were proposed in the 1990s in the framework of the Micro-Pattern Gaseous Detectors (MPGD) R&D programme including the RD51 project at CERN. Despite the challenges of the COVID19 pandemic, work has proceeded apace, taking into account valuable lessons from the past research and development efforts.

The construction of the 128 MM and 192 sTGC chambers for the ATLAS NSWs required true international collaboration between research institutes, universities and industrial partners. The construction of the sTGC was shared among five consortia located in Canada, Chile, China, Israel and Russia. Several large size sTGC prototypes were built and qualified. The first full size quadruplet, with dimensions 1.2×1m2 was constructed in 2014 at the Weizmann Institute in Israel, providing important input for the design of the final modules and to establish the procedures of construction and assembly. Moreover, beam tests of the full size sTGC prototype at Fermilab, US allowed the extraction of the intrinsic sTGC detector resolution. The production of the MicroMegas detectors took place in numerous institutes from France, Germany, Greece, Italy and Russia. The MMSW prototype (MicroMegas for the Small Wheel) was designed to fit the dimension of the half Cathode Strip Chamber (CSC) detector currently installed in the present Small Wheel in ATLAS. The MMSW was installed in the ATLAS experiment in 2014, allowing it to evaluate the detector response under realistic conditions during Run 2. Building this medium size prototype provided input for the design of the final modules and was essential for establishing the procedures of construction and assembly.

Materializing novel technologies is a laborious journey and the construction of the NSWs presented certain challenges that the ATLAS collaboration successfully overcame as discussed in a recent CERN Courier article. The integration of both MM and sTGC chambers to form the wheel sectors took place at CERN from 2018 to 2021. A sandwich arrangement of sTGC-MM-MM-sTGC is used to maximize the distance between the two sTGCs multilayers for improved track segment angular resolution at the trigger level. The choice of eight planes per detector was dictated by the need to provide a robust, fully functional detector system over its whole lifetime. 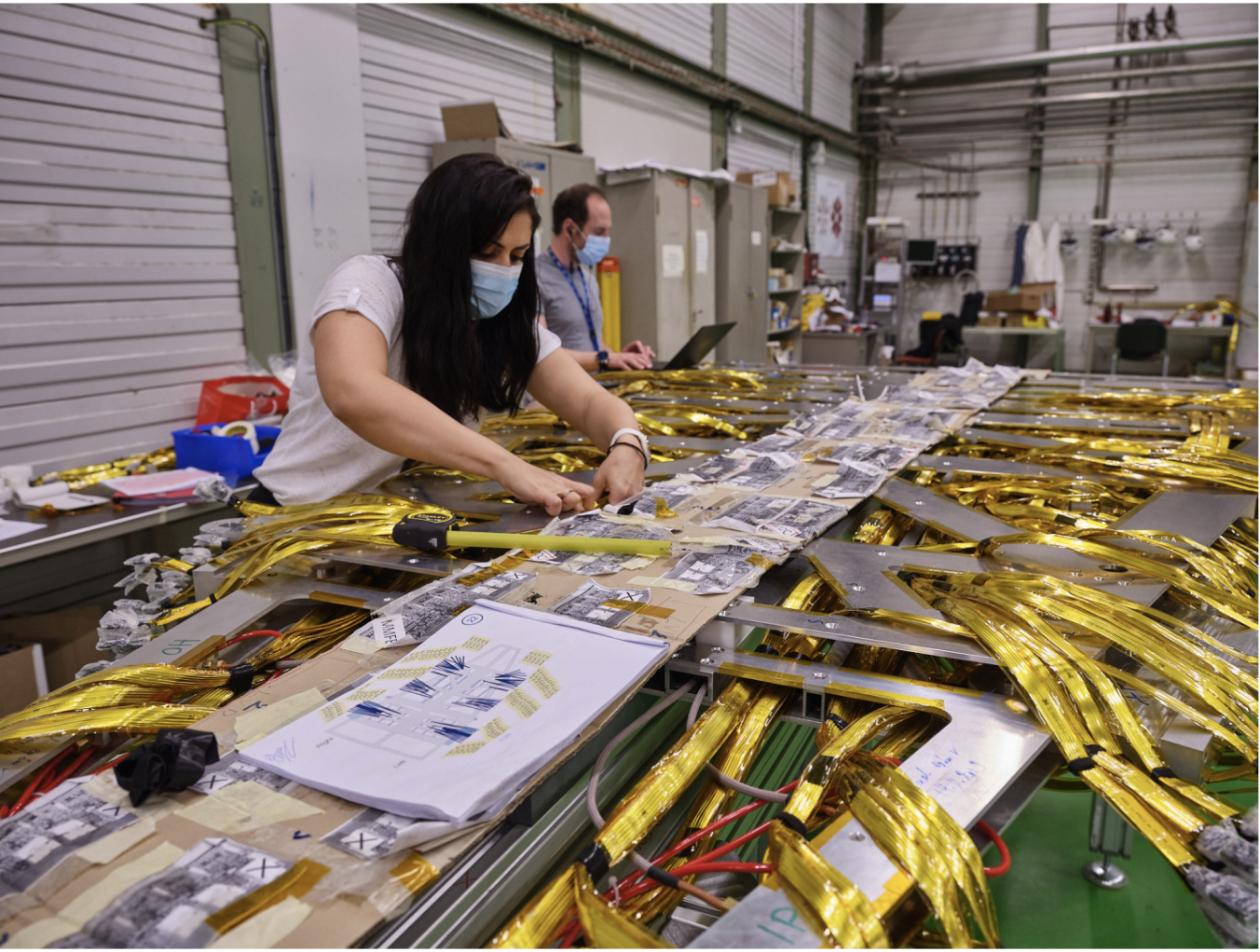 Assembly of the NSW chambers at CERN. (Image: CERN)

Following the completion of the electrical, cooling and gas connections during 2020 and 2021, all sectors were commissioned and tested on the wheel. Four MM chambers form a double-wedge, assembled accounting for the severe alignment requirements, which is then equipped with all the necessary services and the final front-end electronics (see “Taking stock” image). The systems were fully tested in a dedicated cosmic-ray test stand to verify the functionality of the detector and to evaluate the detector efficiency. For the sTGCs, three chambers were glued to fiberglass frames using precision inserts on a granite table to form a wedge. After long-term high-voltage tests, the sTGC wedges were equipped with front-end electronics, cooling, and readout cables and fibres. All the sTGC chambers were tested with cosmic rays at the construction sites, and a few were also tested at CERN. An unexpected problem on the first sectors on wheel A was the presence of a noise level in the front-end electronics that was significantly higher than observed during integration. A large and ultimately successful effort was put in place to mitigate this new challenge, for example by improving the grounding and shielding, and adding filtering to the power supplies. 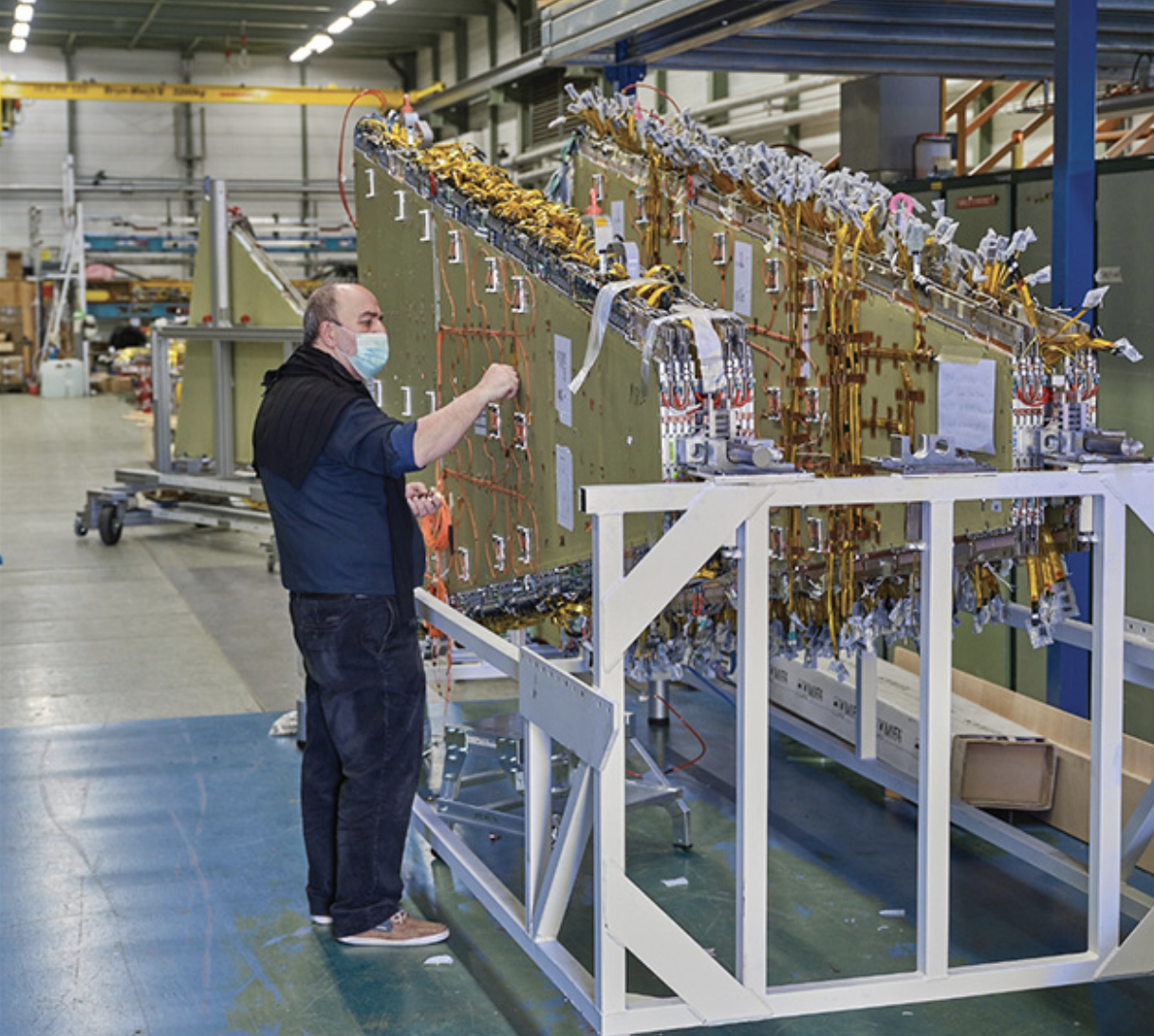 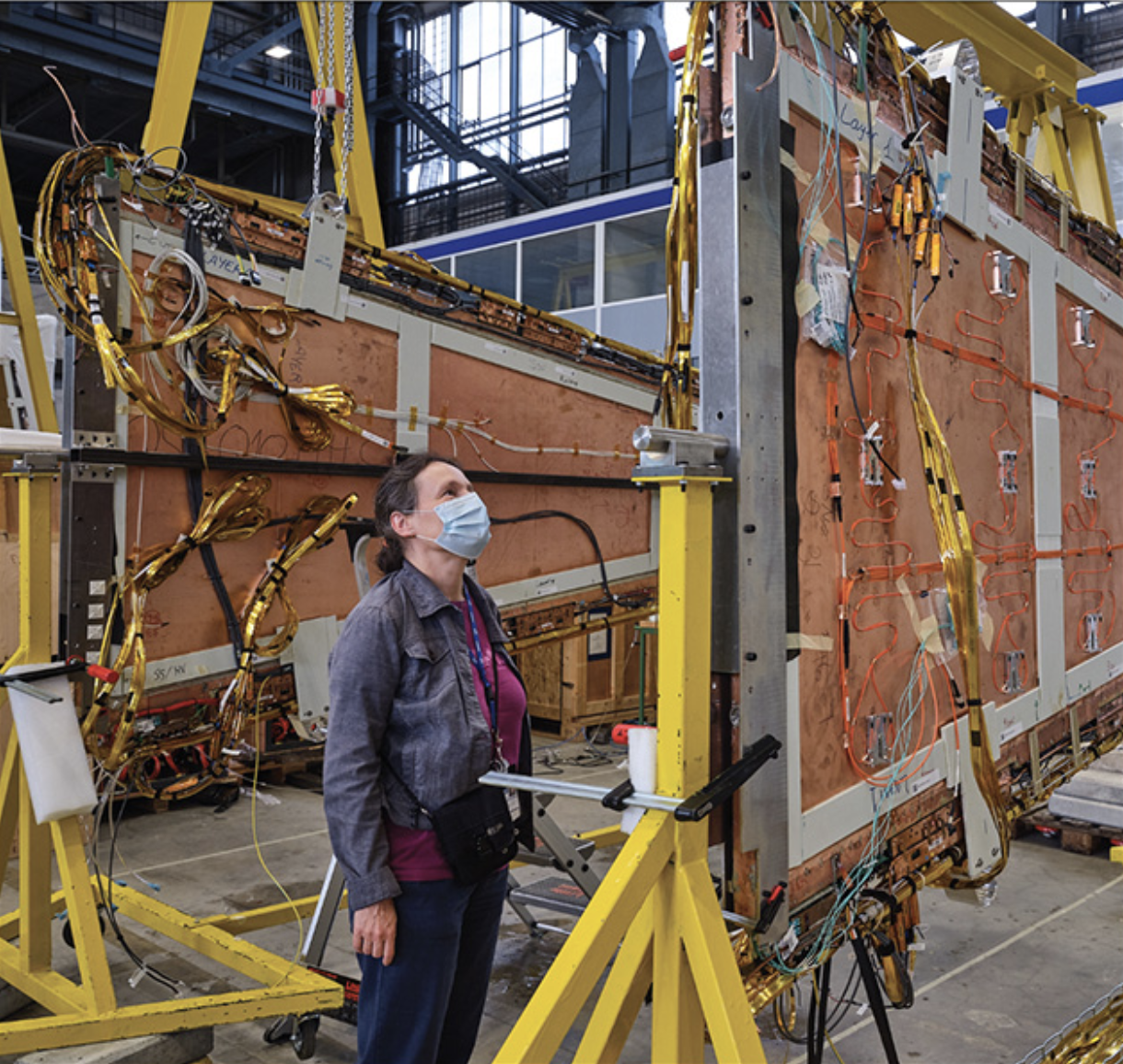 In 2021, an important milestone for the NWS upgrade project was reached as both wheels of the forward muon spectrometer have been completed and installed in the ATLAS detector. Prior to lowering the NSW into the ATLAS experimental cavern, other infrastructure was installed to prepare for detector operation. The service caverns were equipped with electronics racks, high-voltage and low-voltage power supplies, gas distribution systems, cooling infrastructure for electronics, as well as control and safety systems. Where possible, existing infrastructure from the previous ATLAS small wheels was repurposed for the NSW. On the 12th of July 2021, the New Small Wheel A was lowered in the ATLAS cavern, and moved into its final position between the calorimeter endcap cryostat and the endcap toroid magnets of the ATLAS detector.

NSW “A” positioned in place inside the ATLAS experiment. (Image: CERN)

The second new small wheel  (New Small Wheel C) was also completed on 27th of September 2021 and was transported on October 11 to point 1; a huge success given the complexity of the project. 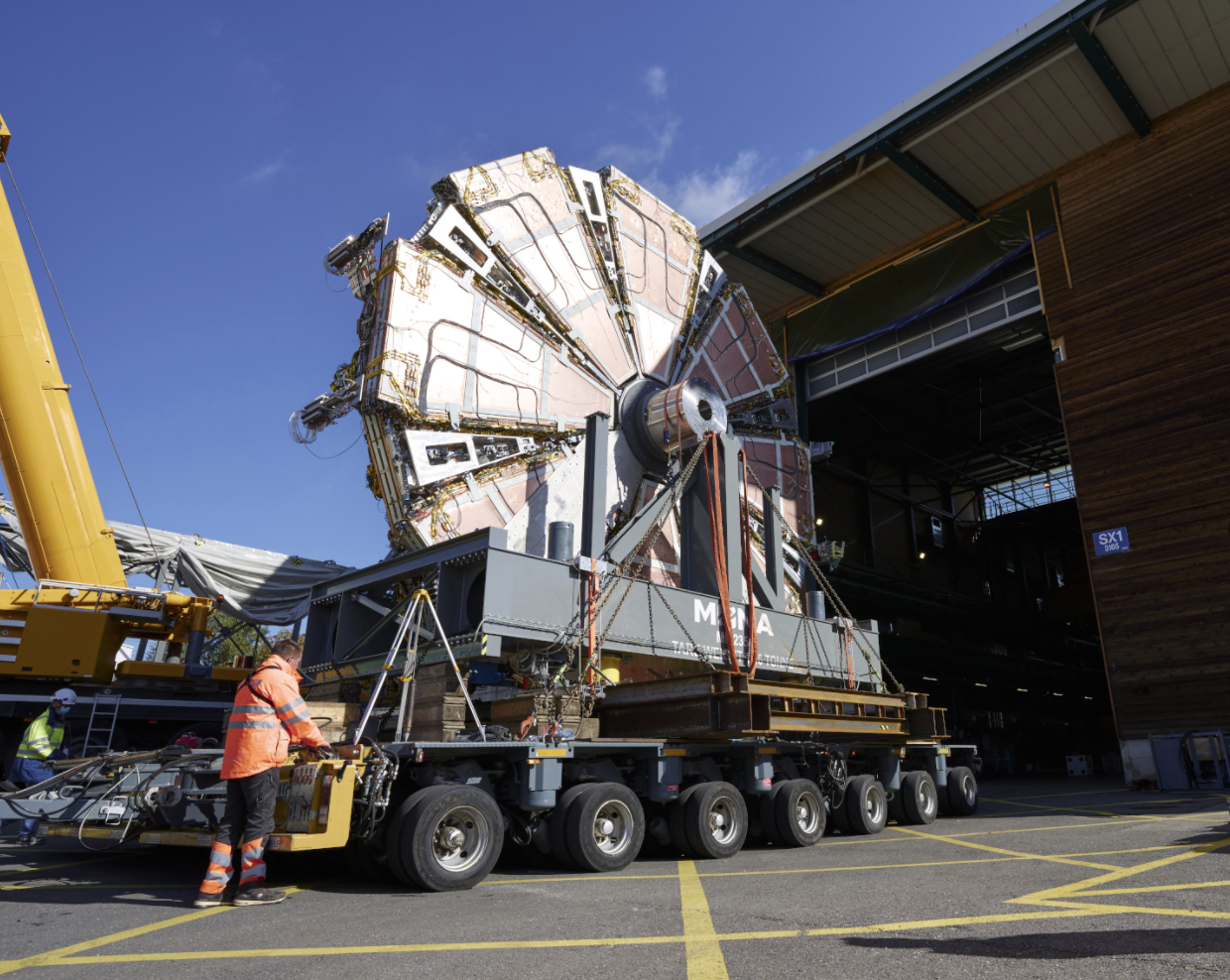 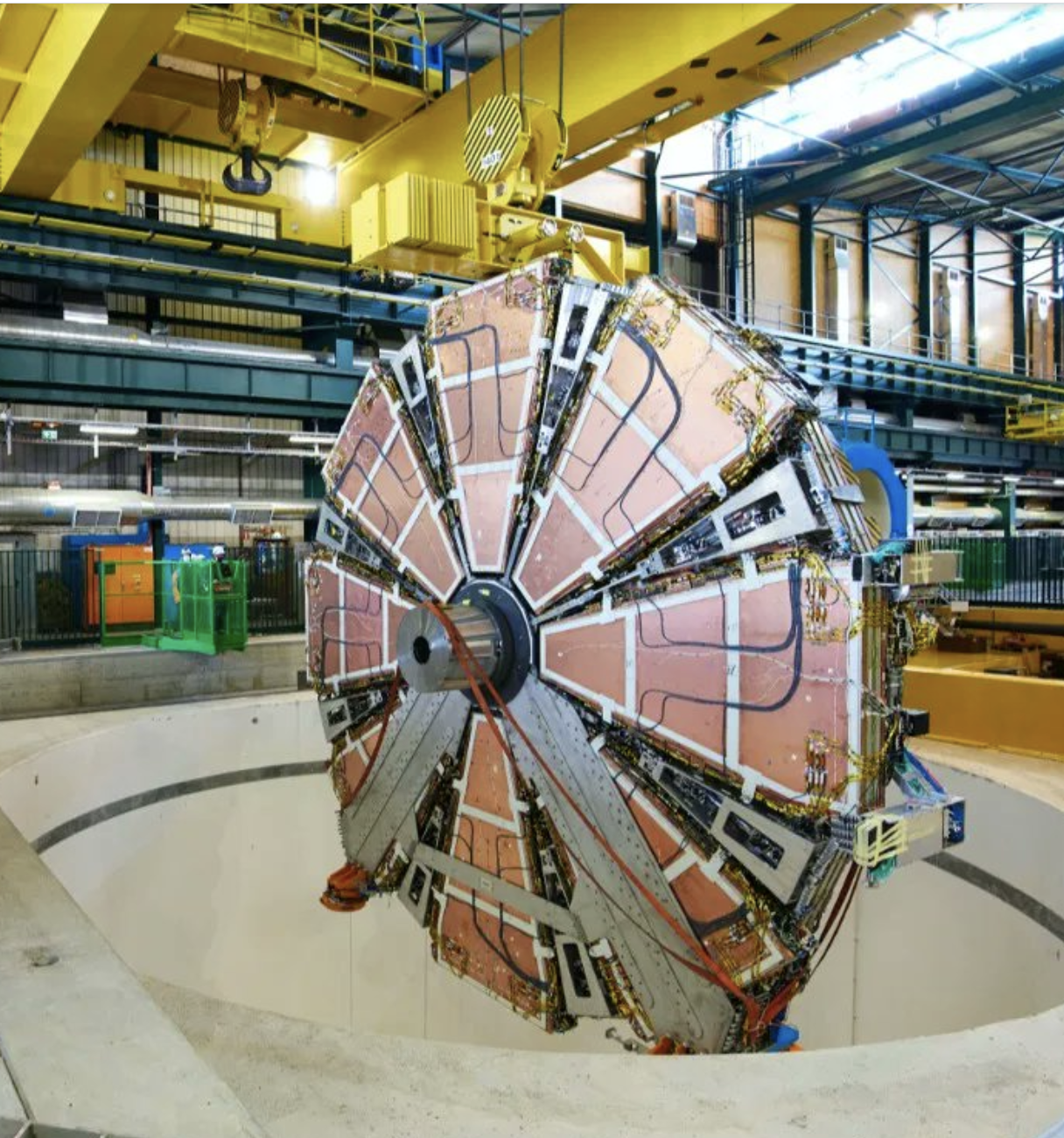 NSW “C” enters the ATLAS surface hall, located just above the experiment, on 14 October 2021 (top) and lowered into the cavern (bottom).

“When we set out to complete the NSW detectors in time for Run 3 of the LHC (starting next year), we knew it would be a tough assignment,” says Ludovico Pontecorvo, ATLAS Technical Coordinator. “That the team managed to keep the project on track – despite a global pandemic and the tragic loss of their project leader, Stephanie Zimmermann – is a testament to their incredible talent and dedication.”

Following the successful completion of installation, the first New Small Wheel has started final testing and commissioning before the next run of the LHC. During February 2022 the teams worked to complete commissioning and testing and starting from April 2022, a very important “commissioning with beam” phase will be carried out to ensure stable data taking in Run 3.

The completion of ATLAS NSW has been a collective effort, involving numerous ATLAS institutes from around the world. The timely completion of the upgrade schedule was made possible thanks to their dedicated support to the NSW project over the course of several years.