The ATLAS collaboration presented the first evidence of “ttH production”, a rare process where a pair of top quarks emits a Higgs boson. Observing this process would provide new insight into the Higgs mechanism and allow for new studies of how unknown physics might (or might not) change the behaviour of this fundamental particle.

The low production rate – or cross section – of ttH (only 1% of the total Higgs boson rate) makes it especially difficult to measure. The number and complexity of ways in which the Higgs boson and top quarks can decay add to the difficulty. Using the 13 TeV dataset collected in 2015 and 2016, ATLAS performed several searches targeting different Higgs boson decay modes. By combining these results, ATLAS has found statistically significant evidence for ttH production.

A couple of beauties: exploring the ttH (H --> bb) channel

As over half of Higgs bosons decay to a pair of bottom quarks (H→bb), the ttH (H→bb) decay channel offers the largest statistical sample of ttH events. However, its signal is very difficult to extract, as top quarks are frequently produced in association with a pair of bottom quarks not originating from a Higgs boson, making the signal difficult to distinguish from this background.

The analysis relies on the identification of b-jets (jets resulting from the hadronization of bottom quarks) and complex multivariate analysis techniques to reconstruct the events and determine whether candidates are more likely to arise from ttH production or from the large background. Events with one or two opposite-sign charged leptons (electron or muon) are categorized into 19 regions as a function of the number of jets and b-jets, and the quality of the b-jet identification. All these regions are statistically combined.

Figure 1: Comparison between data and prediction for the Boosted Decision Tree discriminant in the most sensitive region of the ttH(H->bb) channel with a single electron or muon. The red dotted line depicts the ttH signal shape (not to scale). (Image: ATLAS Collaboration/CERN).

In the most sensitive regions, ATLAS uses a machine learning algorithm (“Boosted Decision Tree”) trained on simulated events to better discriminate the ttH signal from the background. Less signal-sensitive regions are useful to reduce the large background uncertainties.  The most sensitive region contains events with exactly one electron or muon, six jets and four b-jets of the best quality (corresponding to a probability to correctly identify a real b-jet of 60%).

Multiple leptons: searching for ttH in H→WW and H→ττ events

The probability of the Higgs boson decaying to a pair of W bosons or a pair of tau leptons is smaller (22% and 6%, respectively), however the background in these decays is also much smaller and easier to estimate. These decays are detected in searches for events with either a pair of same-sign charged leptons, or three or more charged leptons. Seven analyses were performed in total, each targeting a different combination of possible leptons in the final state. Figure 2 shows the expected and observed number of events in each channel in their respective initial selections, as well as additional selections that were used to confirm the background modelling.

Figure 2: Comparison of prediction to data after the fit in the eight signal and four control regions of the ttH multi-lepton analysis. (Image: ATLAS Collaboration/CERN) 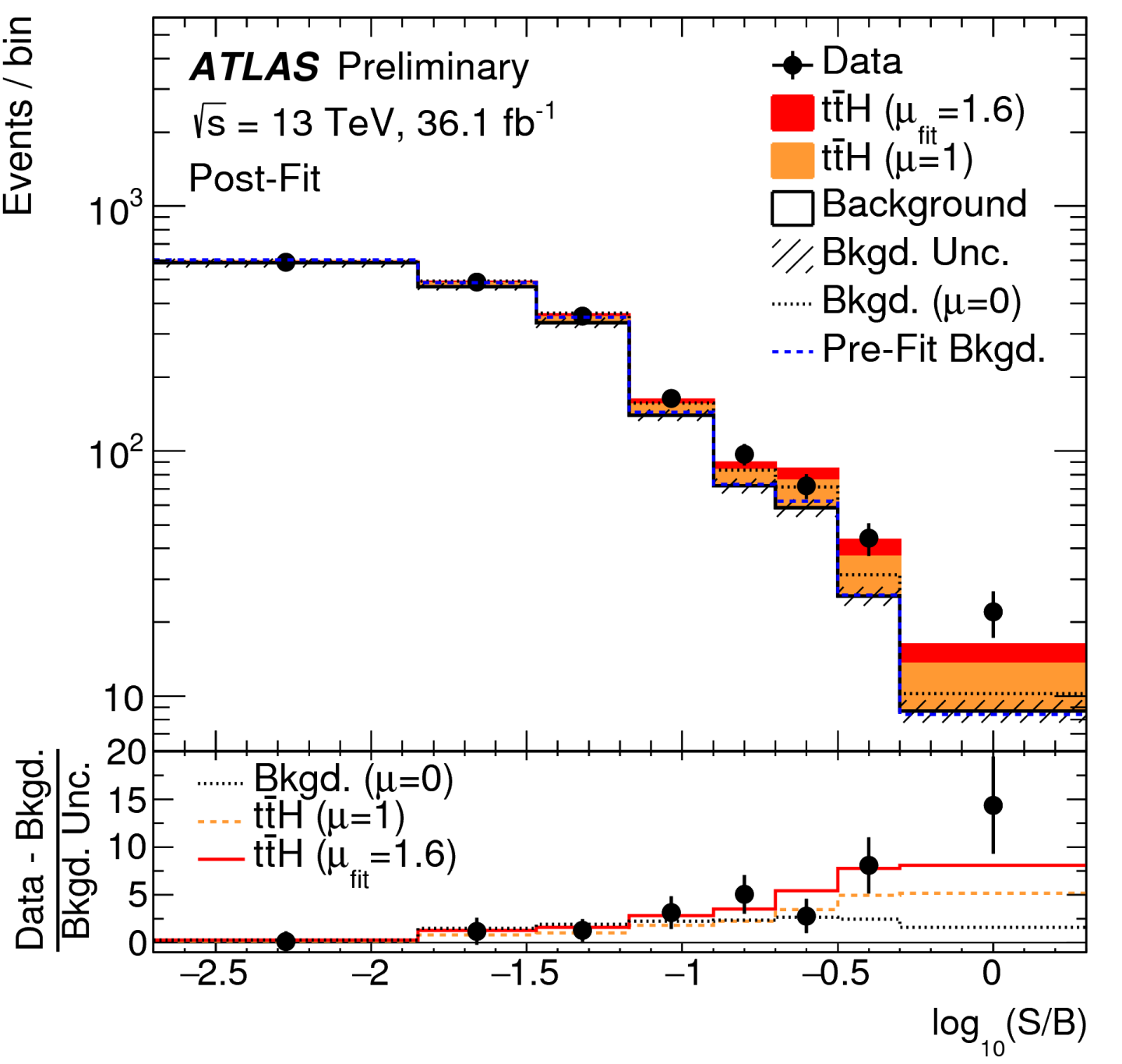 Figure 3: Event yields as a function of log(S/B) for data, background and a Higgs boson signal with m(H) = 125 GeV. The final-discriminant bins in all signal regions of the ttH multi-lepton analysis are combined into bins of log(S/B), where S is the expected signal yield and B the fitted background yield. (Image: ATLAS Collaboration/CERN)

A major challenge for multi-lepton analyses is distinguishing leptons produced in the decay of a W boson (itself coming from a top quark or a Higgs boson) from those produced by the decay of lighter particles containing b-quarks. The latter, so-called “non-prompt” leptons, are plentiful in top quark decays. However, as they are typically associated with additional nearby particles, the same techniques used to identify jets arising from b-quarks can be used to identify non-prompt leptons. This allowed ATLAS to significantly reduce the non-prompt lepton background compared to earlier analyses.

Another complication is that several important background decays in multi-lepton searches – in particular, top quark pair production with an additional Z or W boson – are themselves quite rare and thus not yet fully understood. As such, the new ATLAS analyses were designed to minimize the impact of these backgrounds and to permit an in-situ check of compatibility with the theoretical predictions.

In Figure 3, the various histogram bins used in the combined fit of all the multi-lepton analyses have been unrolled according to the increasing expected signal-over-background ratio, with the most background-like bins on the left and the most signal-like ones on the right. An excess of data over the expected background is clearly visible in the high signal-over-background bins on the right. This excess corresponds to 4.1 standard deviations. 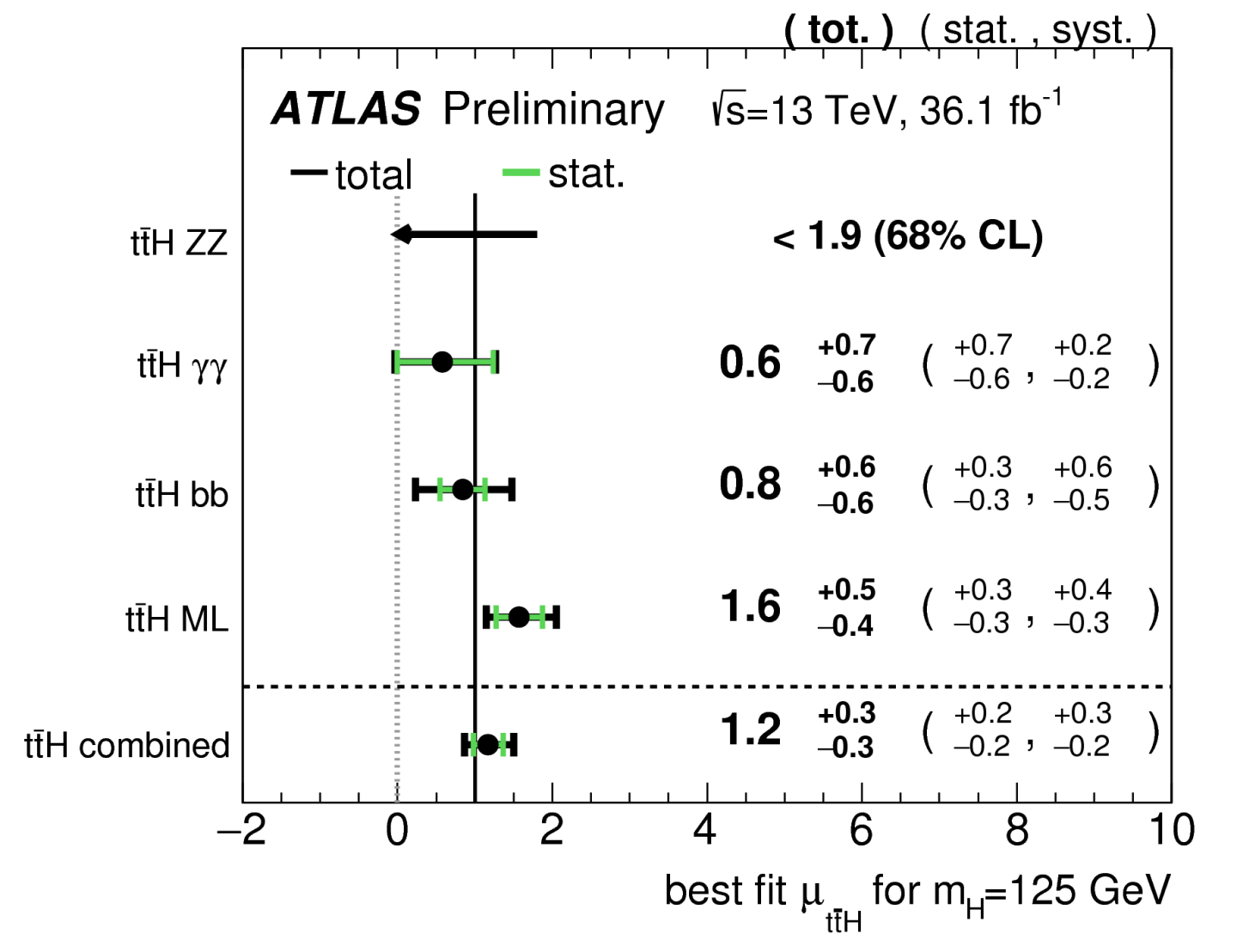 Figure 4: Summary of the measurements of the ttH signal strength from individual analyses and the combined result. The best-fit values of the signal strength μ(ttH) for the individual analyses are extracted independently, and systematic uncertainty nuisance parameters are only correlated for the combination. As no events are observed in the H -> ZZ* -> 4l analysis, a 68% C.L. upper limit on μ(ttH) is reported. (Image: ATLAS Collaboration/CERN)

A Higgs boson can also decay to a pair of photons or to a pair of Z bosons, which then decay to a pair of leptons (leading to a four-lepton final state). These decays are quite rare, but enjoy very small and well-controlled backgrounds. Studies in these channels were combined with the new H→bb and multi-lepton channels described above.

ATLAS statistically combined all of these analyses to observe an excess with a significance of 4.2 standard deviations, for an excess of 3.8 standard deviations expected in the Standard Model. This is the first evidence of the ttH process occurring at ATLAS. Figure 5 summarizes the ratio of observed-to-expected ttH signal rate (or “signal strength”) in each of the channels described above, as well as in the combination. A cross-section of 590 +160 –150 fb is measured, in good agreement with the Standard Model prediction of 507 +35 –50 fb. This measurement, when combined with other Higgs boson production studies, will add more detail to our understanding of the Higgs boson.