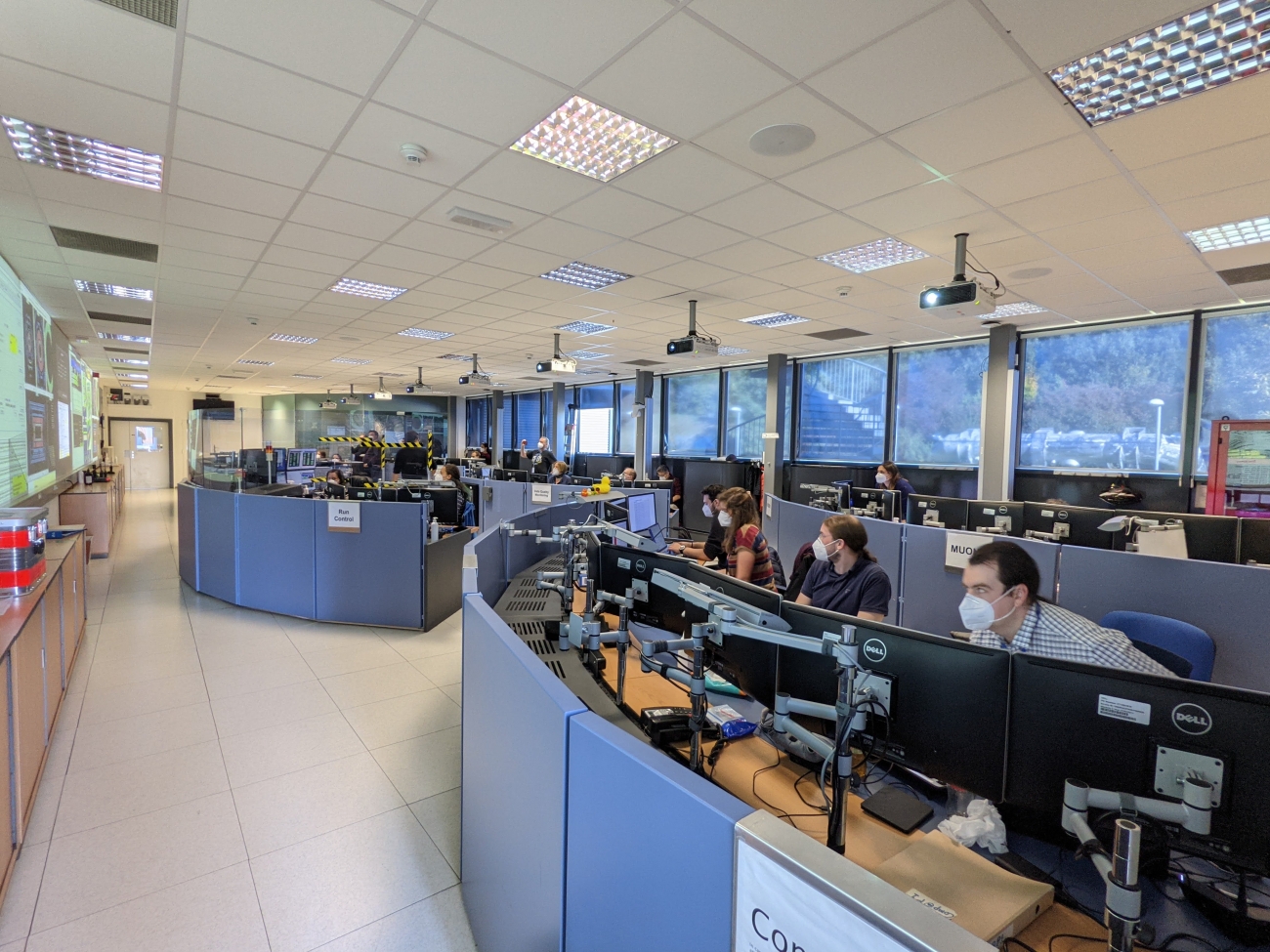 Since the start of LS2, ATLAS has undergone an intense maintenance and consolidation programme to meet the challenges of Run 3 of the LHC, and fully exploit the available physics opportunities. This includes the installation and commissioning of new detectors and electronics thus enhancing the Level-1 trigger and rate capabilities of the experiment. Data-taking activities during the long shutdown have encompassed standalone runs of individual systems, combined runs involving several or all available systems, and cosmic-ray data taking. Moreover, ten “Milestone” weeks (i.e. combined data-taking runs with all available systems) took place during LS2 with the most recent during the LHC pilot run.

Milestone weeks help the experiment to retain expertise, train new subsystem experts, re-establish shift operations and build a pool of qualified shifters for Run 3. The pilot run beam test was the first period since the start of LS2 when ATLAS had 24/7 shifter coverage at all desks. Due to covid restrictions on the number of persons allowed in the ATLAS control room, experts also participated via the satellite control rooms at Point-1 as well as remotely, via Zoom, using the new video-conferencing system that was installed in June. The system will be used as a ‘hotline’ allowing experts to contact the ATLAS control room on a 24/7 basis.

During the pilot run, ATLAS was in an unusual configuration. There was no magnetic field and the C-side was opened by 3.1 meters from the normal running position, awaiting the installation of the second New Small Wheel (NSW) while the shafts above the collision hall remained open, without the usual shielding present. Unlike during much of LS2, the ATLAS Inner Detector silicon detectors and LAr calorimeter were fully powered. Full coverage from the LAr digital trigger upgrade was available, with ‘super cells’ operational and the corresponding reconstructed energies sent to the Level-1 calorimeter trigger (L1Calo). The L1Calo legacy system provided triggers for splashes and collisions, while the Phase-1 FEXes (a new system of feature extractor modules with improved input granularity and algorithms) all recorded data parasitically. The pilot run also saw the start of NSW integration testing in the main ATLAS data-taking partition, with the A-side partially participating in splashes and collisions. 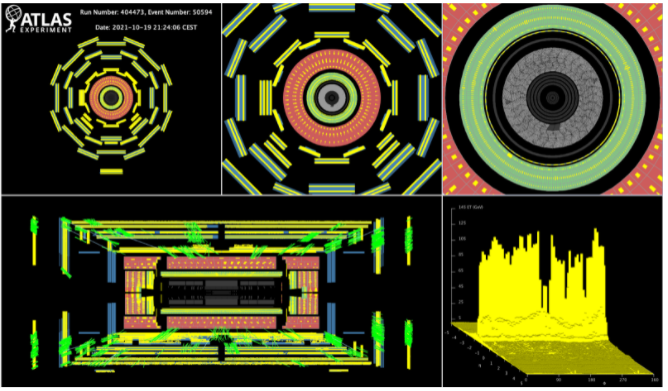 Figure 1. ATLAS recorded the first beam splash events on October 19th 2021, when proton beams circulated in the LHC for the first time since the end of Run 2. This image displaying that first event shows, from the centre moving outwards, particle interactions in the inner tracking detectors, in the electromagnetic and hadronic calorimeters, and in the muon detectors, respectively.

Preparations for beam splashes started on October 13th with extensive combined running and continued through the weekend, checking system readiness and running through the setup procedure. The initial splashes came during the first threading of the beams on October 19th. The LHC threaded the beams through all other interaction points first, then finally through Interaction Point 1 after surface work on the NSW had finished. The first splash event was recorded from Beam 2 at 15:46, followed by a splash from Beam 1 at 15:52, and these were used to understand the LHC timing (monitored using the Beam Pick-up Timing eXperiment (BPTX) detectors on both sides of ATLAS) and the legacy L1Calo-based ‘ring-of-fire’ (EM layer, pT > 20 GeV, 1.6 < |η| < 2.0) was used as the trigger. The timing of all other L1 triggers within 15 bunch crossings of this L1Calo reference was monitored. ATLAS recorded additional splashes later, that same evening, as well as during two rounds of splashes dedicated to fill the requests from the experiments on the evening of the 22nd of October.

Following the first splashes the LHC delivered much more than promised, roughly 40 hours of collisions with stable beams. The rate at IP1 was ~2 kHz and the first hour was used for trigger latency measurement and adjustment. Once the latency was timed in, ATLAS could proceed with timing in the readout path. In addition, a programme to characterise the non-linearity of van-der-Meer scan knobs at IP1 was successfully accomplished during two dedicated fills with non-colliding and colliding beams on the 30th and 31st of October. Interestingly, the magnetic non-linearity measured with the LHC Q1 beam position monitors is qualitatively consistent with the value extracted from the 2018 luminous-region data from a 900 GeV length-scale calibration. 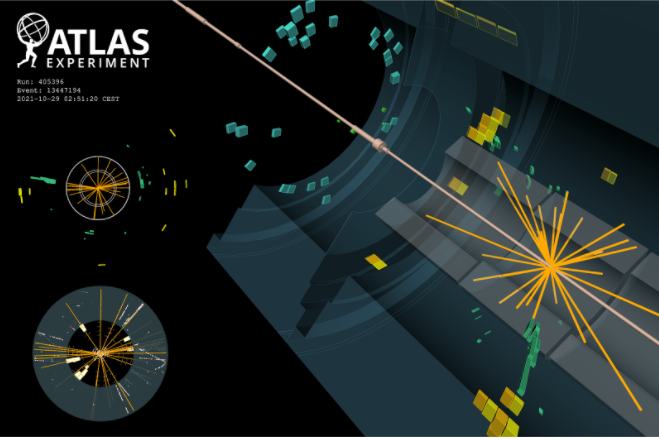 Figure 2. Event display of a test collision event recorded in ATLAS on October 29, 2021, when stable beams of protons at the injection energy of 450 GeV per beam were delivered to ATLAS during the LHC pilot run beam test. The view on the right shows a cut-out view of the ATLAS detector: from the center, the orange lines represent reconstructed tracks, and the green and yellow boxes show energy deposits in the electromagnetic and hadronic calorimeters, respectively. The top left inset shows a projection of the reconstructed tracks on the transversal plane of the detector, with the energy deposits in the cells of the electromagnetic calorimeter (barrel and endcap areas) and the barrel hadronic calorimeter. The bottom left inset shows a detailed view of the reconstructed tracks and hits from the inner tracking detectors.

ATLAS has two more Milestone weeks in early 2022. The first one will take place after the beam pipe bake-out (heating the beam pipe in the interaction region to above 200 oC to activate the Ti-Zr-V coating that allows for a vacuum level down to 10-11) and the second starting prior to the closure of the ATLAS cavern. ATLAS is looking forward to the start of Run 3 of the LHC, with many new systems to be commissioned. In 2022 the focus will need to be on re-establishing a stable operating mode as quickly as possible, while at the same time establishing a high data-taking efficiency.