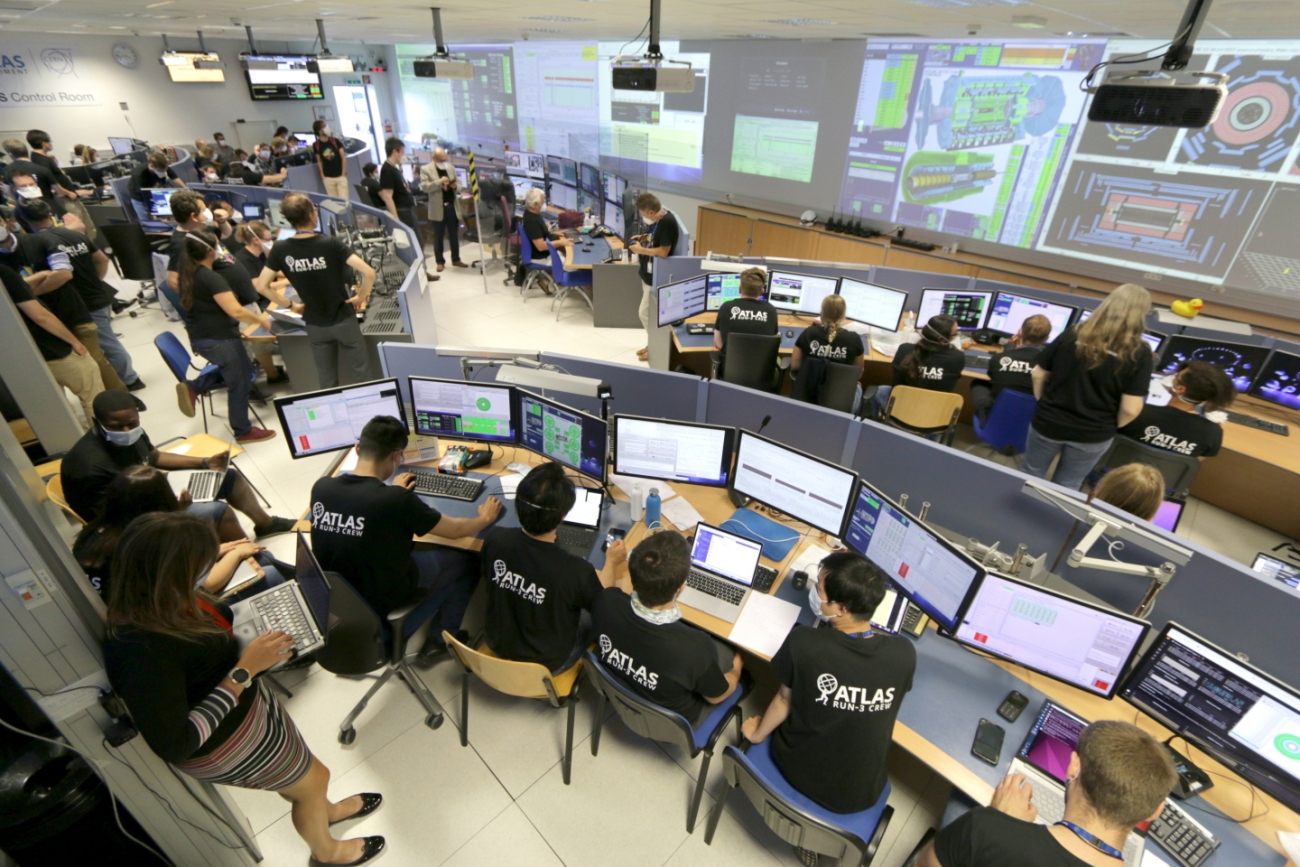 This year saw the long-anticipated start of the LHC Run 3, and the excitement was tangible in the ATLAS control room during the afternoon of the 5th of July when the LHC proton beams were expected to be brought into stable beam collisions, for the first time at the record center-of-mass energy of 13.6 TeV.

ATLAS had moved to continuous operation already at the end of March 2022, at the same time the LHC had started operation with the checkout of the machine. Three months of final preparation for the first data of Run 3 lay behind the ATLAS detector experts, checking and fixing remaining hardware problems, validating the readout firmware and software and stress testing the trigger and data acquisition system with long, high-rate overnight runs and the collection of cosmic muon data. First proton-proton collisions provided by the LHC throughout May and June were also recorded, providing early opportunities to calibrate the detector sub-systems. 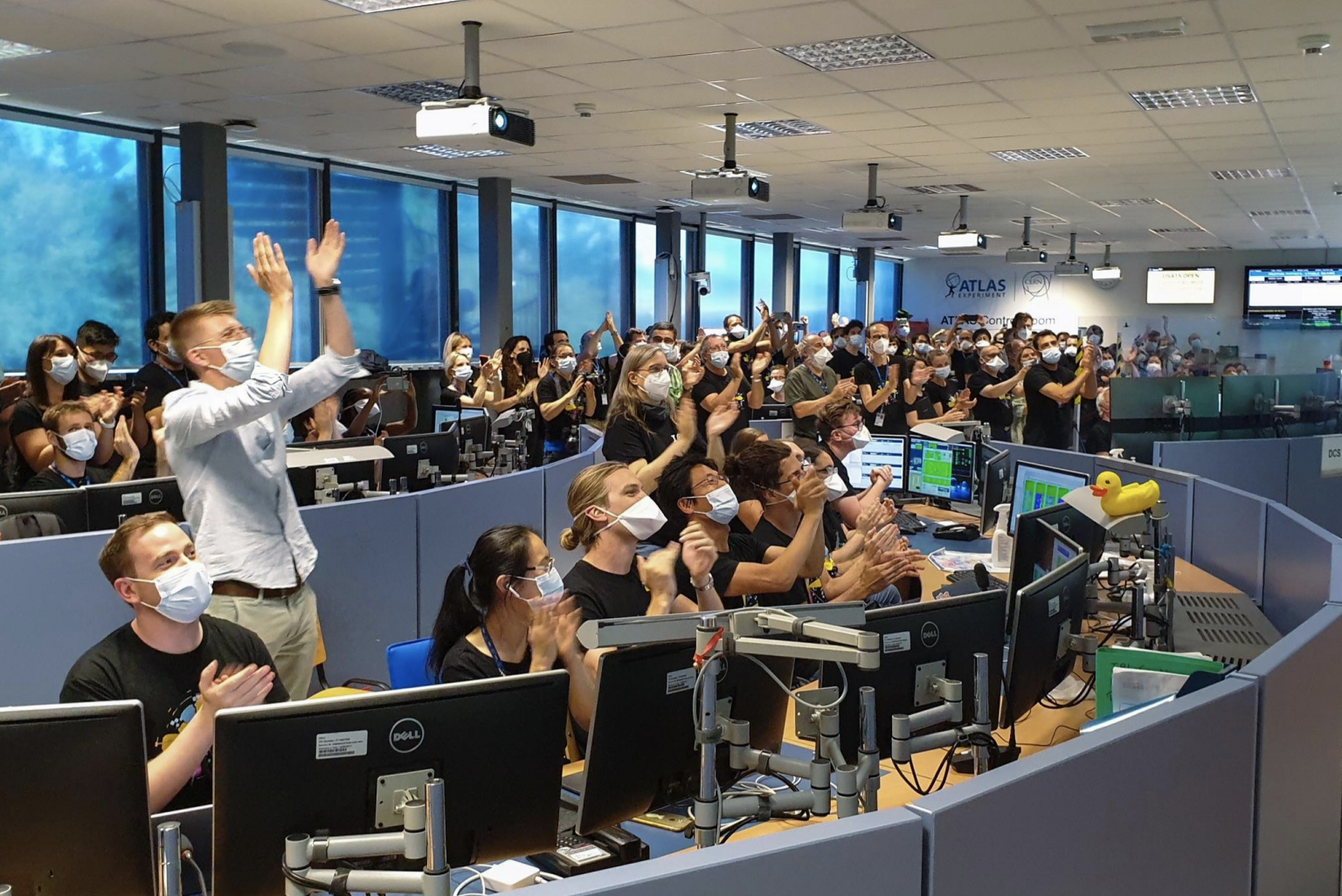 Figure 1: When the first event display of a proton-proton collision appeared projected on the front wall of the ATLAS Control Room on 5 July 2022 at 16:46, a storm of applause broke the low-volume chatting that had been going on for the whole day, and a feeling of relieve and accomplishment replaced the tension that was felt just moments before.

In the first month of stable-beam operation, during which the LHC gradually increased the beam intensity, ATLAS used the collision data to continue calibrating the detector readout, to further time in remaining sub-systems and to better understand the luminometers. Data at very low pileup for early tracking performance studies were also collected.

When the LHC reached an almost full machine configuration by the end of July a sense of normality returned to the ATLAS Control Room and detector experts, operation teams and the changing shift crews shifted their focus on physics production as it was remembered from Run 2. This was expected to last until the heavy ion running in November and only to be interrupted by a dedicated data-taking period for the LHCf experiment, two high beta-star runs and a special data taking program for the luminosity calibration of the LHC experiments. Apart from occasional hardware and electronics failures and repairs, the ATLAS data taking was smooth sailing and the detector recorded data with an efficiency of 94%. 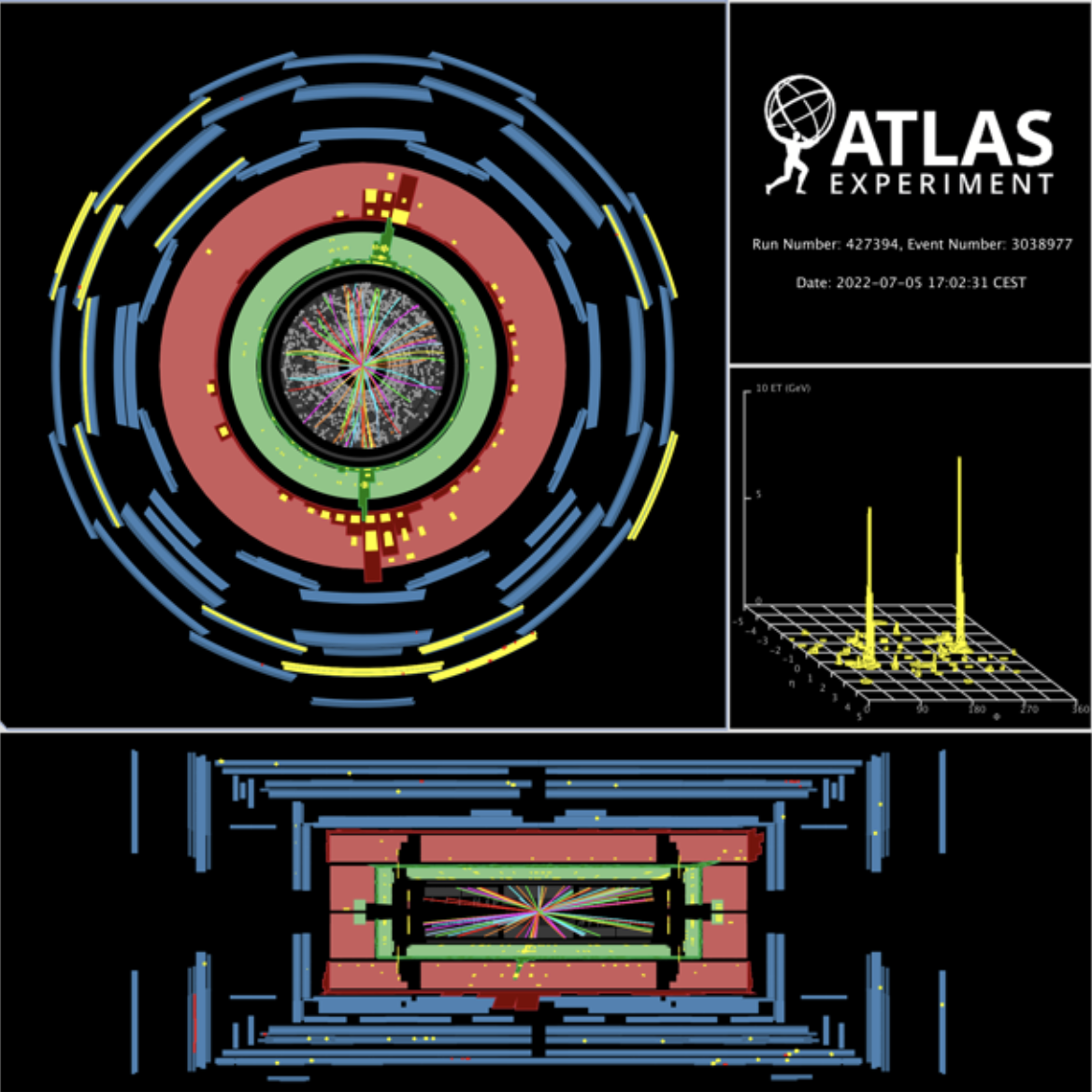 Figure 2: An event recorded by the ATLAS detector on 5 July 2022, when stable beams of protons at the energy of 6.8 TeV per beam were delivered to ATLAS for the first time by the LHC. Starting from the center of the ATLAS detector, reconstructed tracks of the charged particles in the Inner Detector, the energy deposits in the electromagnetic (green) and hadronic (red) calorimeters and the hits in the Muon Spectrometer (blue) are shown.

The LHC RF incident, resulting in stopping the LHC operation between 23 August and 20 September, put an unplanned halt to the ATLAS data taking and the already lowered goal of collecting a luminosity of 25 fb-1 in 2022 was in jeopardy. However, the LHC returned from the forced stop with excellent performance and ATLAS continued to record proton-proton collisions data, sometimes more than 1fb-1 per day. When the LHC stopped operation for 2022 on 28 November, it had delivered more than 40 fb-1 of proton-proton collisions to ATLAS which were recorded with close to 93% efficiency and, apart from quality problems in the early data, with more than 97% of the data being of good quality for the rich ATLAS physics program.

This large integrated luminosity came at the price of canceling the heavy ion program this year. Only a 2-day test took place in November, validating new ion-operation features of the injector complex and the LHC and delivering commissioning data to ALICE and the other LHC experiments. ATLAS participated in this data taking, performing tests and collecting data which are tremendously useful for the preparation for the 5-week heavy ion program in 2023. 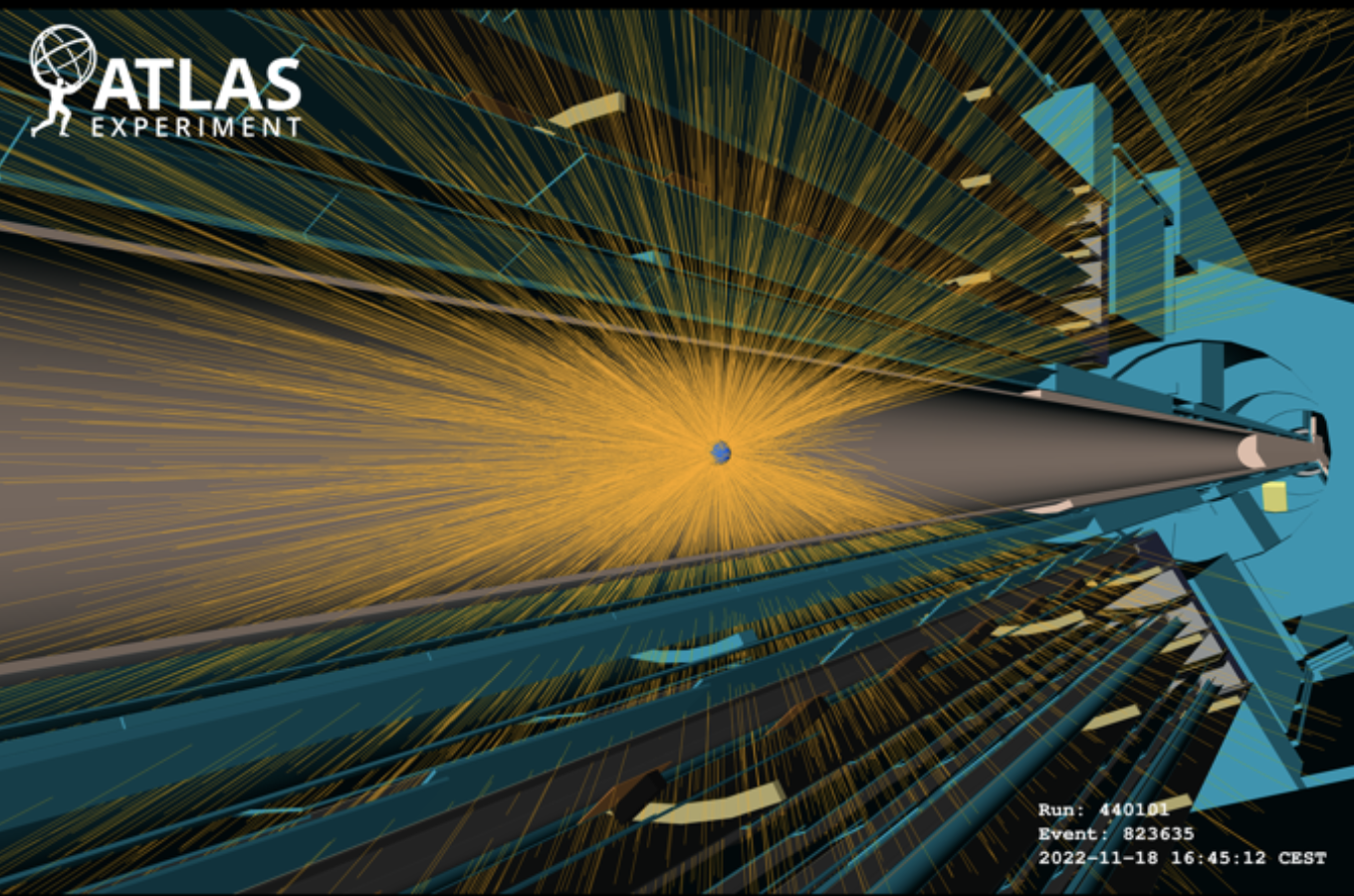 Figure 3: Lead ions colliding in the ATLAS detector at a center-of-mass energy per nucleon pair of 5.36 TeV. This event was recorded on 18 November 2022 during a heavy ion test fill of the LHC in preparation for the 2023 heavy ion program. The figure is a 3D visualization of real experimental data collected and reconstructed by the ATLAS detector. In this event nearly five thousand tracks were generated from the single vertex.

Two special data-taking periods took place this year, the recording of low luminosity data by LHCf experiment, in which foremost the ATLAS Zero Degree Calorimeter (ZDC) participated, and the obligatory yearly luminosity program. For the 4-day LHCf program the ZDC, which is not very radiation hard and therefore stored away during normal LHC operation, was installed in the LHC tunnel. The combined LHCf + ZDC data taking itself was done almost entirely in a single, record-breaking 60-hour fill, during which ATLAS recorded 1.3 Petabyte of data.

Throughout the 2022 data-taking period and with minimal impact on the ATLAS data taking, work went on in parallel to progress with the integration and commissioning of two phase-I upgrade projects, the Level-1 calorimeter trigger and the New Small Wheel (NSW). The NSW is the new inner station of the endcap muon system, with improved tracking and triggering capabilities in preparation for the high-luminosity LHC; it is the biggest phase-I upgrade project of ATLAS. The wheels on both sides had been installed and connected during LS2 in 2021. Throughout Spring 2022 the NSW data acquisition had been integrated with ATLAS and the detector was ready to participate in the recording of the first stable beam collisions on 5 July. Since then, the NSW has participated in most ATLAS data-taking runs, occasionally partially withdrawn when required by the commissioning work on the NSW trigger. A milestone was reached in the last week of November when data were recorded based on signals from the NSW trigger processor for the first time.

Of the new Level-1 calorimeter trigger most hardware was installed and integrated in the ATLAS operation and data acquisition by July and its data-driven commissioning could commence with the first proton-proton collisions. The international chip shortage caused a delay in the delivery of the last system components and prolonged the installation, integration and commissioning of the trigger real-time path and data acquisition of the full system until late October. Since the completion of this work, events can be triggered by the phase-I Level-1 calorimeter trigger at the full design rate. Validation samples were recorded during November data-taking and physics validation has started. Though these milestones do not yet mark the finalization of the upgrade projects, with reaching them ATLAS sees itself well on track to address the new opportunities presented by the higher luminosity projected for 2023.