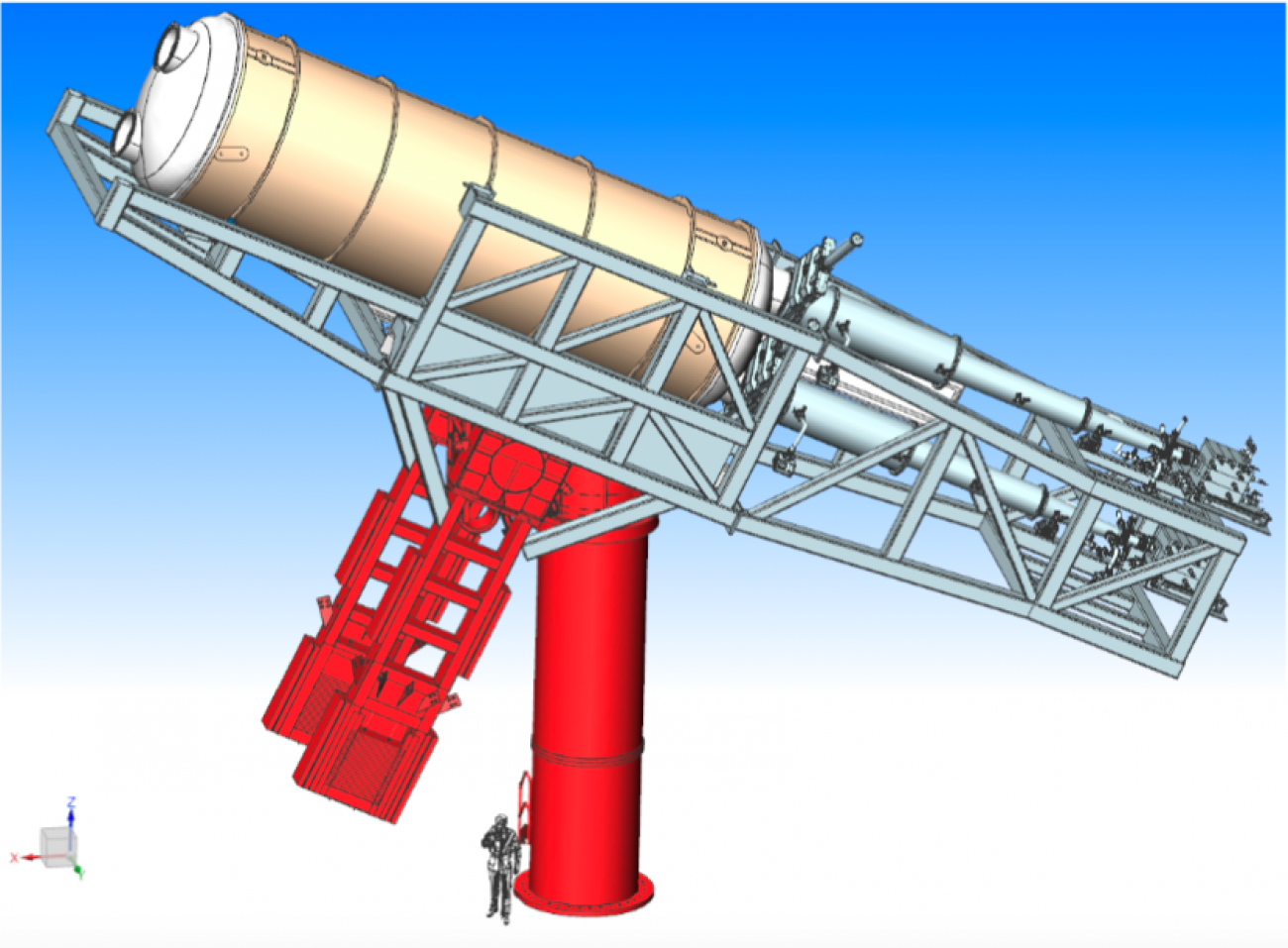 The International Axion Observatory (IAXO) will search for axions or axion-like particles emitted by the Sun with unprecedented sensitivity. Axions are hypothetical particles that appear in extensions of the Standard Model that include the Peccei-Quinn mechanism [1–4], proposed to solve the “strong-CP problem”, or why the strong interactions seem not to violate the CP symmetry. By virtue of this mechanism, axions could be produced non-relativistically in the early universe. Therefore they are a very appealing candidate to constitute the missing dark matter in the Universe. In recent years, interest on axions has been steadily increasing [5], and they are now considered one of the most promising “portals” to new physics beyond the Standard Model. More and larger projects are continuously joining the quest, looking for axions produced in the laboratory, or from natural sources, like the Sun or the dark matter halo.

A generic property of axions is that they couple with photons in a way that axion–photon conversion (and vice versa) can occur in the presence of strong magnetic or electric fields. This phenomenon is the basis of axion production in stars, as well as of most strategies for detecting axions. Magnets are therefore at the core of any axion experiment, as is the case for axion helioscopes [6], which look for axions from the Sun. In these experiments, solar axions crossing the magnet may convert into x-rays that can be subsequently detected in devices placed at the end of the magnetic field region. This is the strategy followed by the CERN Axion Solar Telescope (CAST) that, using a decommissioned LHC magnet, is currently the most powerful axion helioscope ever built. After almost two decades of operation, CAST has put the strongest limits yet on the axion–photon coupling across a range of axion masses, surpassing previous astrophysical limits for the first time and probing relevant axion models of sub-electron-volt mass. IAXO was conceived [7] as a new generation axion helioscope that builds on the CAST experience, and aims to provide a substantially improved sensitivity to go deep into unexplored axion parameter space.

The central component of IAXO is a purpose-built large-scale superconducting magnet similar to those used in large HEP detectors. It follows a toroidal configuration, and includes eight large “user” bores in which the solar axions can convert into x-rays. All of them are equipped with optics that concentrate the signal x-rays into small very sensitive low-background detectors. These x-ray optics are based on the reflection of x-rays by mirrors at grazing incident angle, technologies used in x-ray astronomy. The detectors will image the signal photons at the focal spot with very low level of background, achieved by means of techniques similar to that used in underground experiments: the use of radiopure detector components, passive and active shielding of environmental and cosmic radiation, and offline event discrimination techniques. The whole infrastructure is installed on a movable platform that allows tracking the Sun for about half the time. The baseline design of IAXO, shown in figure 1, is endowed with a sensitivity to solar axions of more than 4 orders of magnitude better in signal-to-noise-ratio than CAST.

Figure 1. Sketch of the IAXO infrastructure as described in [7], showing the magnet and the eight detection lines including optics and detectors. The overall assembly is placed on a rotating platform to follow the Sun.

As a prior stage towards IAXO, the collaboration is planning the construction and operation of BabyIAXO, an intermediate scale version of IAXO. It is conceived to test all IAXO subsystems (magnet, optics and detectors) at a relevant scale for the final system and thus serve as a prototype for IAXO, but at the same time as a fully-fledged helioscope with relevant physics reach itself. The conceptual design of BabyIAXO, recently published [8], is shown in figure 2. The BabyIAXO magnet will feature two 10 m long, 70 cm diameter bores, and will host two detection lines (optics and detector) of dimensions similar to the final ones foreseen for IAXO.

Figure 2. CAD design of the full BabyIAXO infrastructure, as described in [8], including the two-bore magnet, and the two detection lines, with x-ray telescopes and focal plane detectors, the latter surrounded by their shielding. All the assembly is placed on a support frame and positioner to keep the optical axis of the experiment pointing to the Sun. The overall system length is about 19 meters. Although both detection lines are shown of equal length (corresponding to 7.5 m of focal length of the XMM optics), in reality one of the lines will be shorter (5 m focal length).

The project has been approved to be hosted by DESY, which offers an ideal environment to BabyIAXO as part of its emerging axion experimental program. The collaboration has been strengthened during the last years, and counts now 125 scientists, which make IAXO the largest collaboration in axion physics. In particular, the project relies on the superconducting magnet expertise from CERN. Indeed both the designs of the IAXO and BabyIAXO magnet have been carried out by CERN magnet experts, the latter with partial support form the CERN Physics Beyond Colliders (PBC) study group. Recently an agreement has been signed between DESY and CERN to frame such contribution, which is expected to be continued during the imminent construction phase. One of the two x-ray optics to be used in BabyIAXO is a flight spare module of the XMM-Newton mission that has been kindly lent to the collaboration by ESA. The second one will be built by the collaboration, as a prototype for the future IAXO optics. It will be the first large-scale optics specifically designed and built for axion physics. The baseline detectors to be placed at the focal point of the optics are small time projection chambers read with Micromegas readout planes of microbulk type. These detectors have achieved record background levels after many years of development especially within the CAST experiment. However, a portfolio of additional x-ray detection technologies is being developed in the collaboration, especially in view of IAXO, including Ingrid detectors, Magnetic Metallic Calorimeters, Silicon Drift Detectors or Transition Edge Sensors. These technologies could provide improved performance (e.g. in terms of energy threshold and resolution) that could be  particularly important e.g. in case of a positive detection, to extract additional information from the data, like the mass or other couplings of the axion [9].

BabyIAXO is expected to get ready for physics by 2024, and then a baseline data taking program with both vacuum and a buffer gas in the magnet bores will follow. With this BabyIAXO will detect or reject solar axions with axion-photon couplings down to ∼ 1.5×10−11GeV−1, and masses up to ∼0.25eV. BabyIAXO will offer additional opportunities for axion research in view of IAXO, like the tests of improved detectors such as the ones mentioned above, or the implementation of radiofrequency-cavity-based setups to search for dark matter axions. The latter is being studied under the RADES project, already producing results in the CAST magnet, and also exploiting technological synergies with CERN expertise. 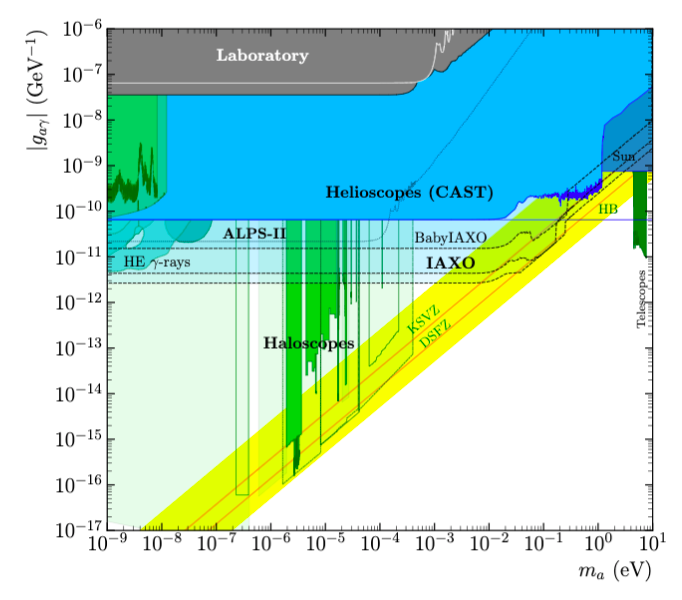 Figure 3. Sensitivity plot of IAXO and BabyIAXO in the primary axion-photon coupling versus axion mass parameter space, compared with the QCD axion (yellow) band and other current (solid) and future (dashed) experimental and observational limits (we refer to [5] for details on those limits and regions).

Figure 3 shows the sensitivity prospects of both BabyIAXO and IAXO in their baseline configurations, within the current context of axion searches. BabyIAXO, and later on IAXO, will go well beyond current upper bounds on the axion-photon coupling from CAST and astrophysics, and venture deep into unexplored areas, in particular probing a large fraction of QCD axion models in the meV to eV mass band. This region encompasses the values invoked to solve the transparency anomaly, and the ones solving the stellar cooling anomalies, as well as a number of other possible hints. It also includes some of the axion models that can account to the totality of dark matter [9]. Most of this region can only be reached realistically by using the helioscope technique, and therefore the BabyIAXO/IAXO program is unique in the wider landscape of experimental axion searches. In the case of a positive detection, (Baby)IAXO will permit high-precision measurements campaigns to determine axion parameters and getting further insight into the underlying axion models. In any case, IAXO is bound to play an important role in the future of axion and ALP research, with potential for a discovery, already at the BabyIAXO stage.