Beyond the Standard Model Explanations of GW190521 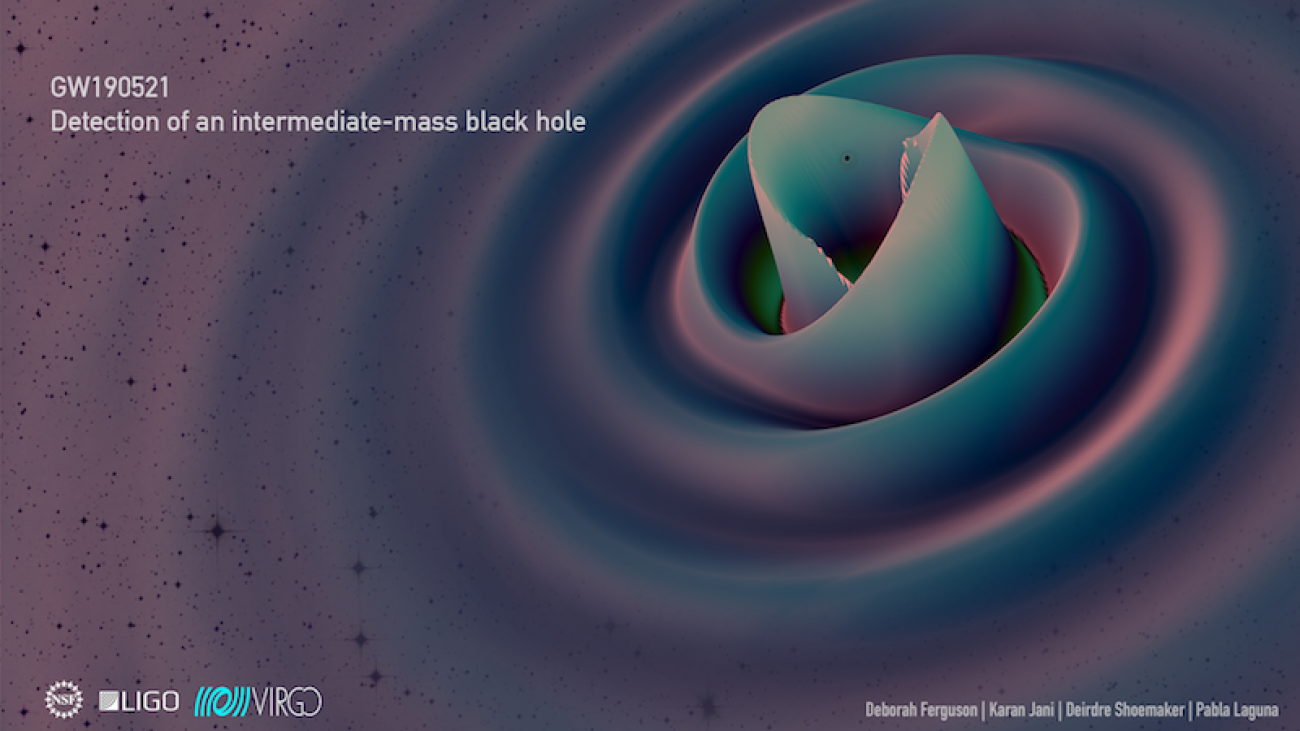 Earlier this month the LIGO and Virgo gravitational wave observatories announced the discovery of GW190521, an exceptional and extraordinary signal. Seven billion years ago — a little over half the age of the universe — at the other end of the universe, two black holes spiraled into each other and merged, releasing energy in the form of gravitational waves, ripples in the very fabric of space-time, that have since travelled unimpeded across the universe towards us at the speed of light.

This is not the first binary black hole merger the observatories have detected since they started taking data a little over five years ago, but what makes this particular event so remarkable is the masses of the black holes involved. The merging objects had masses 66 and 85 times larger than our own Sun, and the final black hole formed had a mass 142 larger, with 8 solar masses of energy radiated into gravitational waves.

The GW event GW190521 observed by the LIGO Hanford (left), LIGO Livingston (middle), and Virgo (right) detectors. Stellar evolution theory predicts that stars cannot produce black holes of more than about 65 M☉, so there should be a black hole mass gap above that value.

Not only are these the heaviest objects ever detected using gravitational waves, but their very existence poses a perplexing conundrum for astronomers: such heavy black holes should not exist! Black holes are the final remnants of very massive stars that have exhausted all of their fuel and collapse under their own gravity, but not all stars can survive long enough for this to happen. The reason for this is pair-instability. The cores of massive stars can reach temperatures where electron-positron pairs can be produced in copious amounts. These rob the star of its pressure support, causing it to contract and heat up, producing even more pairs. This runaway instability only ends when the temperature is high enough to ignite oxygen, resulting in a thermonuclear explosion that causes the star to shed a vast amount of its outer layers. This process can be so violent that it rips the star apart, leaving no remnant . It affects heavier stars more than lighter stars, resulting in the absence of black holes with masses between 50 and 120 times larger than the Sun: the “black hole mass gap”. Both black holes observed in GW190521 lie deep within this mass gap, posing a challenge to the theory of stellar astronomy, and this is what makes GW190521 so remarkable.

So if these objects could not have formed from the direct collapse of massive stars,perhaps they could instead have acquired mass after their formation? This is indeed possible. One scenario is that the heavy black holes formed in prior merges from black holes outside the mass gap, but this would require some very special conditions and some very lucky encounters for both black holes to form and then find each other. We will be able to determine how plausible this is if we were to observe similar events in the future.

Another possibility is that the black holes initially formed outside the mass gap but somehow accreted matter and grew heavier. This scenario has been deemed unlikely, and previous studies have found that, even if this were to happen, such heavy black holes are extremely difficult to form.

With the explanations from astrophysical models somewhat lacking, we are left with the tantalizing possibility that this amazing event is a signal of new physics . In our recent paper, we proposed several possible new physics scenarios that could allow black holes to form in the mass gap. These fall into two categories. One possibility is that new light particles could be produced in the cores of massive stars and act as an energy sink. Another is that our theory of gravity is incomplete, and that Einstein’s theory of general relativity requires an extension in order to explain these objects.

Let’s start with new particles. These could be anything from axions, which are predicted by extensions of the standard model of particle physics, to leakage into extra dimensions, predicted by theories where we live on a slice of a higher dimensional space-time. New particles are abundant in BSM theories and may potentially be related to dark matter physics.

The common link between these possibilities is that they all result in an additional source of energy loss from the cores of massive stars. Light degrees of freedom which couple to the material in the star may lead to energy loss, as neutrinos do in the SM. These enhanced losses imply that the star has to burn its fuel more rapidly. A shorter helium burning phase means that less carbon is processed into oxygen so there is less fuel for the pair-instability. The ultimate results of this is that it is possible for heavier black stars to survive the pair-instability and collapse to form black holes. In our paper, we found that several loss mechanisms were able to allow 66 and 85 solar mass stars to survive and could therefore explain both observed black holes. The large extra dimension scenario was particularly promising.

The other scenario is that gravity was modified in the early stars that formed LIGO’s black holes. Such theories have received attention in the cosmology community for some time. A striking new prediction of these theories is that the strength of gravity is no longer universal but instead varies inside different objects, including stars and galaxies. If correct, the heavy black holes observed in GW190521 could have originated in a galaxy where the strength of gravity is very different from our own. Stars are held in equilibrium by a delicate balance between the outward pressure generated by nuclear burning and the inward force of gravity.

Be it new physics or an exotic astrophysical process, the existence of these black holes guarantees that there is something new to be learned about the universe. Figuring out precisely how these heavy black holes formed is not possible from a single event, but what is great about the LIGO/Virgo detector network is that it is continually being upgraded to higher sensitivities. Now that we have observed one event like this, we expect more, and all of this extra data will allow us to unravel the mystery of how these inexplicable objects came into being.