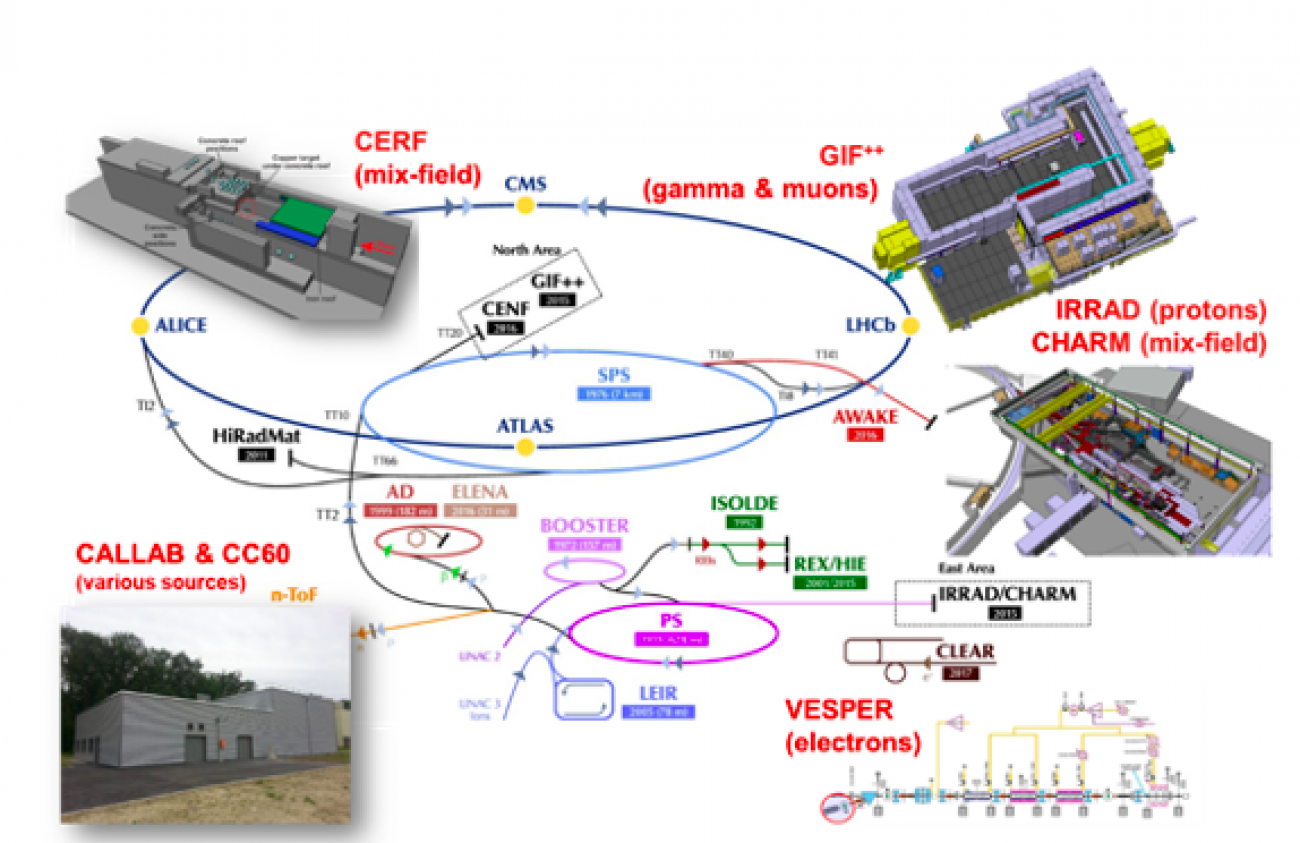 CERN operates several unique in-house radiation-test facilities and makes use of a broad variety of external facilities to satisfy the needs of users from experiments and equipment groups in the Research and Computing (RCS) and Accelerators and Technology (ATS) sectors. To assess the current facilities and testing needs, a joint steering group about Radiation Test Facilities (RTF-SG) [1] was launched in 2019. Moreover, this working group aims also to identify new requirements and long-term operational strategies, build partnerships with external collaborators, as well as improving the sharing of the radiation-test results.

In its first year, the RTF-SG conducted a survey about the facilities commonly employed by the RCS, mainly for the LHC experiments and the electronic systems group. The results were published in the RTF-SG’s first annual report and led to drafting a set of recommendations to be followed-up during 2021.

The LHC experiments use a wide range of radiation-test facilities for their detector equipment and materials, perhaps except for ALICE as in lead collisions the radiation levels are considerably lower. CERN currently provides two in-house irradiation facilities, IRRAD based on a high-energy proton beam and GIF++ exploiting a unique gamma-ray source combined with a muon particle beam. In addition, the experimental collaborations also often opt for irradiation services among their participating institutes. A challenge emerging from this approach, especially for what concern material damage testing, is the difficulty in comparing often heterogeneous results. The lack of commonly used test protocols and procedures induces a level of uncertainty when comparing results obtained in different test facilities.

Similar challenges are present in the accelerator sector, despite previous efforts to homogenize procedures in the radiation qualification of accelerator systems (R2E project [2]). For example, in the ATS  Commercial Off-The-Shelf (COTS) electronic components tests are performed with protons of intermediate energies in external facilities considered representative of the TID, DD and SEE in the accelerator environment. Testing against TID and radiation damage to accelerator materials relies instead on strong gamma-ray sources. While high-dose irradiations for material damage are performed through external facilities accessed via collaboration agreements, for TID tests the sector relies on the in-house CC60 facility. Finally, large accelerator system tests are performed only in-house with the adjustable mix-field radiation environment at CHARM. All these different testing needs could largely benefit from further procedural guidelines efforts and quality controlling. This was one of the objectives of the EU-funded RADSAGA [3] MSCA training network project that was launched in 2017 and saw its final conference and industrial event back in May this year.

As part of the above-mentioned exercise, RTF-SG performed an independent evaluation of the commonly used facilities introducing Key Performance Indicators (KPIs). The results evidenced the strong need for CERN to maintain different in-house facilities (IRRAD, CHARM, GIF++, CC60), as well as a pool of external facilities, suitable to fulfil several well-defined key use cases including (1) sensors & detectors, (2) electronic components (3) system tests and (4) materials irradiations. Moreover, the survey demonstrated that CERN’s in-house facilities remain a flexible tool for present and future CERN R&D programs, within the identified use cases as well as in a broad range of other applications (radiation protection, medical and space among others). In this context, these facilities are complemented by other dedicated CERN test areas, as the one operated at the SPS North Area (CERF) or at the CLEAR facility (VESPER) [4] Moreover, new test areas currently being implemented parasitically to existing fix-target experiments (nTOF, ISOLDE), were also identified in the review. These are considered of interest for in-house damage tests on accelerator materials with representative high-intensity mixed radiation fields, but they present specific limitations (e.g., access flexibility, turnover, test volumes, field uniformity) that should be considered during their exploitation.

External facilities represent for CERN the only possibility of testing for certain types of radiation effects on components and for materials qualification. The access to these facilities is critical, as well as the know-how and services related to the test preparation, execution, analysis, and reporting.

Future LHC upgrades and consolidation projects are expected to increase the requirement for the use of radiation-test facilities thus calling for adequate resources to support the operation and use of the in-house CERN facilities and test areas. For the RCS facilities (IRRAD and GIF++) the last upgrade was in 2012 relying mainly on EU-funding programs while the ATS facilities (CHARM and CC60) budget profile is currently foreseen to start ramping down in 2023. Furthermore, new test areas currently being implemented at CERN should be also supported. According to the RTF-SG report, their unicity makes them suitable for very specific applications and care should be taken to make them grow in this context.

Radiation-test facilities are expected to play a key role in the medium and long-term future of the laboratory. The EPPSU request for the feasibility assessment of the future circular collider and preparing for hosting an energy-frontier (100 TeV) collider sets unprecedented challenges. For example, for the FCC-hh experiments extremely high TID and DD levels are expected for the innermost detector components (exceeding hundreds MGy and 1018 neq/cm2) and the accelerator. Moreover, for an intensity frontier lepton collider like the FCC-ee that could be the first step, extensive tests are required on TID (including radiation damage to materials), due to the higher levels of synchrotron radiation. Besides materials radiation damage in both accelerators and experiments, also the number of deployed distributed systems will increase, increasing accordingly the SEE failure risk. Without an increase in particle flux/dose-rate levels and space availability the existing in-house facilities and test-areas will not be able to fulfil the needs related to radiation testing for FCC.

To meet the demands of the future and grasp the wonderful opportunities for R&D that could find applications outside particle physics (as the history of LHC has shown to us), informative resources and tools should be also provided to the CERN user community to help, for example, to select the appropriate type of facility for a given test. These tools can also ease the execution of the experiments. In addition, they minimize the risk of duplicating them when not necessary by accessing relevant data collections of radiation test results.

The RTF-SG group is actively exploring and strengthening cross-links between the RCS and ATS sectors. It also fosters collaborations with several EU-funded projects (RADNEXT, AIDAinnova, etc.) to strengthen synergies and ultimately the efficiency of our services.