CLOUD experiment makes its own clouds to study 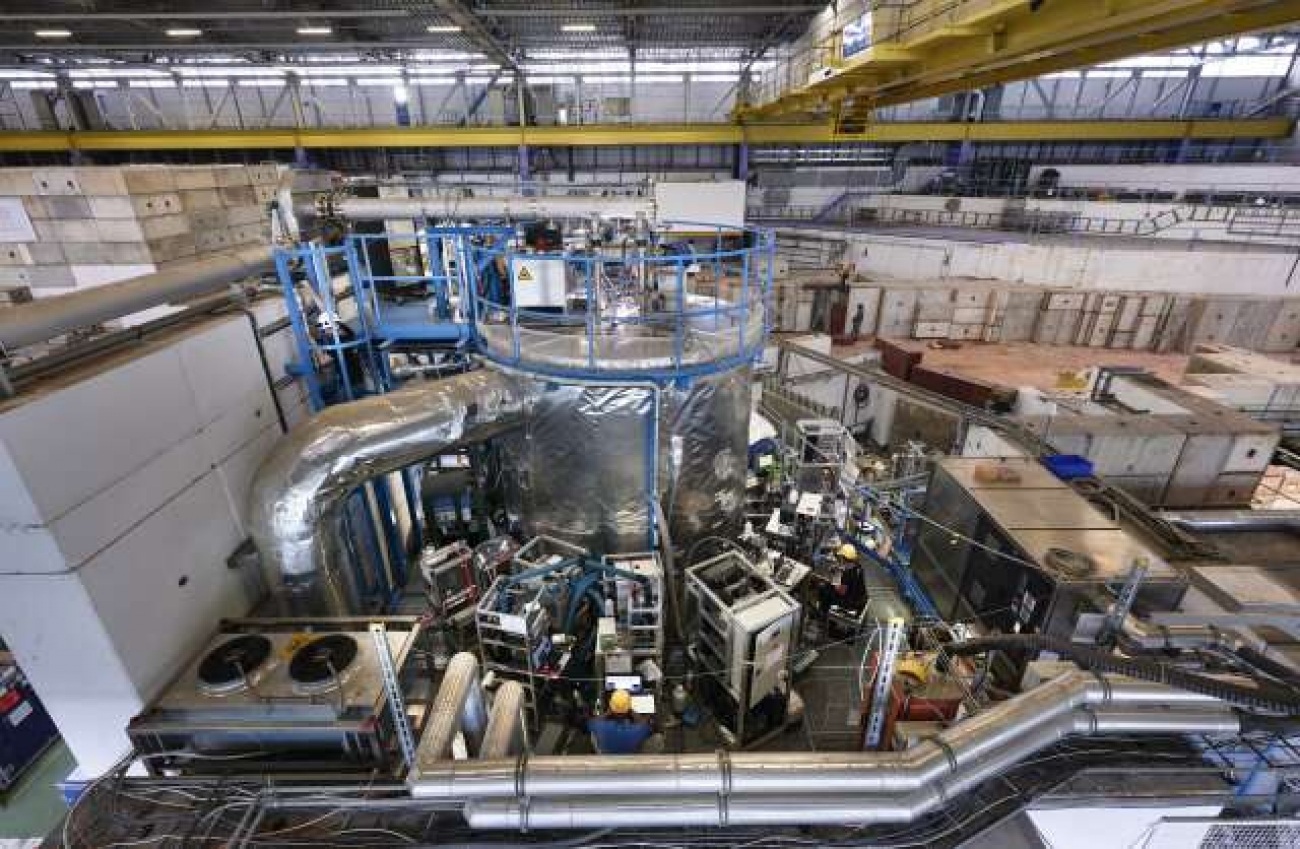 The Intergovernmental Panel on Climate Change (IPCC) recognizes aerosols (small nanometer to micrometer sized particles suspended in air) as the single biggest source of uncertainty in human-driven climate change. Atmospheric aerosol particles are important as they can cool the climate by i) reflecting sunlight and ii) by forming small cloud droplets. But exactly how much cooling, and how much that effect can shift over days, years, or centuries is still not totally clear. To answer this question, the CLOUD experiment at CERN is studying how the formation and growth of new atmospheric particles from reactive gases can modify clouds and climate. Using a particle beam from the CERN Proton Synchrotron, CLOUD is investigating whether these processes are affected by ionisation from galactic cosmic rays. Below, we highlight the four steps that ensure CLOUD’s world leading role in studying the ion-aerosol-cloud interactions. 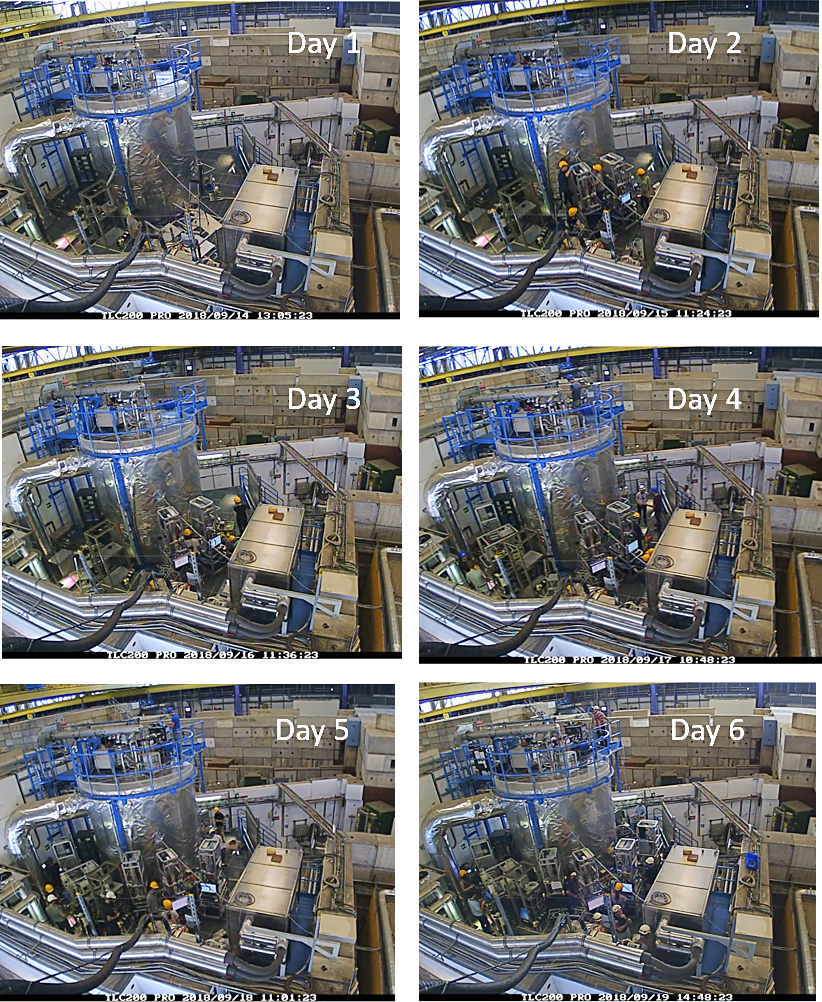 Figure 1. CLOUD being setup for a beam run in the East Hall (T11 beam line) during installation week, 13-19 September 2018. During experimental campaigns, the CLOUD team assembles 50 instruments to characterise both the physical and chemical state of the particles and vapours in the CLOUD chamber. Instruments surrounding the chamber continuously sample and analyse its contents for the entire 9-week physics run.

Making the cleanest aerosol chamber in the world

Many different chambers exist to simulate atmospheric processes, though the general chamber characteristics vary widely, depending on the speciﬁc application and building speciﬁcations. The main variations are size, irradiance, wall material, and temperature and pressure control. Many of the currently available chambers are made of Teﬂon, Pyrex, quartz, aluminum or stainless steel. The CLOUD experiment has a stainless-steel chamber which is leak-proof at 1-1.2 atm pressure and electrically conductive, so it is more suitable for studying ion processes, and can be easily cleaned from contaminants. For instance, common problems for all atmospheric chambers are the wall losses of particles and gaseous species, inhomogeneity, difﬁculty in attaining vapour and particle concentrations similar to the atmosphere, and possible contamination issues. At CLOUD, most of these problems can be avoided by using a large-volume (26.1 m3) chamber with a small surface-to-volume ratio.

Using CERN know-how, the CLOUD chamber has achieved much lower contaminant concentrations than previous experiments, allowing us to measure particle nucleation and growth from a precisely controlled mixture of vapours. A special feature of CLOUD is its capability to measure nucleation enhanced by ionisation from galactic cosmic rays between ground level (i.e. GCR run) and, using a pion beam, provided by CERN’s PS, the top of the troposphere (i.e. beam run) - or with all the effects of ionisation completely suppressed by an internal electric field (i.e. neutral run). We could never make the complex instrumentation seen in Fig. 1 airborne to study the ion effects for aerosol-cloud interactions directly in the troposphere. Therefore, the world-leading research groups within the atmospheric science are eager to come to CERN and measure at CLOUD.

Secondary particles are formed from volatile gaseous compounds through chemical reactions. These compounds can be organic vapours or inorganic acids and bases such as sulfuric acid or ammonia and amines, respectively. As the newly formed particle grows in size, also other compounds can participate in condensational growth. Photochemistry is often needed to produce condensable vapours from precursor gases, e.g. sulphur dioxide leads to sulfuric acid, that ensure survival of the newly formed particles. Fig. 2 gives a first glance inside the chamber and demonstrates different light exposure of the chamber volume, therefore enabling us to simulate specific photolytic processes.

Figure 2. First look inside the chamber. Several lights are utilized to mimic the photochemistry that occurs during daytime in the atmosphere. On left is Light-Sabre4 (528 nm) and on right Light-Sabre1 (254 nm). For example, green sabre is used to photolyze iodine to iodic acid when we study marine environments.

Within the CLOUD physics runs, we have simulated secondary particle formation in various environments such as marine, arctic, boreal forest, amazon rainforest and urban. All these environments were simulated inside the chamber by changing e.g. chemical species, relative humidity, temperature, and ion concentrations to match the real atmospheric conditions. The temperature inside the CLOUD chamber can be precisely controlled to 0.1°C down to -50°C, and therefore covers a wide and relevant temperature range. All experimental conditions can be controlled and measured, including the “cosmic ray” intensity and the trace atmospheric vapours in the chamber, which concentrations are set to levels of only a few molecules per trillion.

In order to ensure ultra-cleanliness inside the chamber when we move from one environmental conditions to another, the walls are occasionally rinsed with ultrapure water, subsequently heated to 373 K and flushed by large volumes of synthetic air (mixed from cryogenic O2 and N2) through the chamber, right before the start of a new experiment. We can also use pion beam together with an electric field for removing aerosols from the chamber. Later on, experimental precursor gas concentrations can be carefully adjusted by using a sophisticated gas supply system build by relying on CERN expertise and know-how.

Actually, if there were no aerosol particles in the atmosphere, there would be no clouds. It is very difficult to form cloud droplets without small aerosol particles acting as "seeds" to start the formation of cloud droplets. As aerosol concentration increases within a cloud, the water in the cloud is spread over many more droplets, each of which is correspondingly smaller. Smaller cloud droplets fall more slowly in the atmosphere and decrease the amount of rainfall and increase the cloud lifetime. Therefore, the smaller cloud droplets form white and long lasting clouds, which have higher cooling effect for climate. Thus, changes in aerosol concentration in the atmosphere can change the frequency of cloud occurrence, cloud thickness, and rainfall amounts.

The CLOUD experiment can study the activation properties of secondary aerosol for cloud droplets and ice particles, thanks to the well controlled humidity and temperature inside the CLOUD chamber. The aerosol particles will be formed and grown inside the chamber from vapours under various conditions, as described above. Thus, we can simulate the cloud formation in various environments from marine to urban environments. Activation of clouds in the CLOUD chamber is done with adiabatic expansion. Clouds are activated by a controlled adiabatic pressure reduction starting from a relative humidity near 95%. This reduces the air temperature and raises the relative humidity above 100%, leading to the formation of a liquid or ice cloud. Clouds form in the atmosphere by the same process.

Clouds can be maintained in the chamber for 5–10 minutes, depending on the selected conditions, until the temperature gradient is removed via heating by the walls and sedimentation of cloud particles reduces the relative humidity below 100%, at which point the cloud dissipates. During this time, we study ice nucleation and cloud properties (e.g. droplet phase, lifetime and optical effects).

Figure 3. Video filmed with an inspection camera during a cloud formation inside the CLOUD chamber. The reflection of a rotating object is CLOUD’s upper mixing fan. The inner surface of the chamber is electropolished.

Heads in the clouds

For decades, scientists have thought that the aerosol particles that form clouds were produced as a counterintuitive side effect of air pollution. It was believed that sulfuric acid, which is mainly produced from fossil-fuel emissions — vehicles, industry, etc. — were necessary for the newly formed aerosols. In CLOUD, we looked more closely at these aerosol particles, and Kirkby et al. (Nature, 2016) found that they can be produced naturally. They can be formed purely from organic vapours emitted by trees and enhanced by galactic cosmic rays by a factor 10-100. To study the effect of ions, the CERN Proton Synchrotron provides us a close enough equivalent to “cosmic rays” that can be adjusted over the full range of ionisation rates occurring in the troposphere, which comprises the lowest ten kilometres of the atmosphere where majority of aerosols and clouds are formed.

Very recently, CLOUD made the latest breakthrough discovery (Wang et al. Nature 2020) which changed our understanding just how cloudy the world actually was before we started polluting it. It seems that secondary particle formation is also responsible for smog episodes in cities. These occur even under highly polluted urban conditions, which is puzzling since the current understanding suggests new particles should be rapidly quenched by coagulation with existing urban haze particles. We have measured that nitric acid and ammonia vapours together can drive the growth rates of newly formed particles 10-100 times faster than previously seen, but only in short bursts that have previously escaped detection. The high growth rates are sufficient to shepherd the particles rapidly to larger sizes where they are less sensitive to being lost through scavenging by pre-existing haze particles. In cities, nitric acid originates largely from NOx emitted by vehicles, and ammonia originates from vehicles and agriculture – livestock and fertilizer.

Overall, accurate projections of climate change are limited by the uncertainty in how much aerosols and clouds have increased since pristine pre-industrial times and how they may continue to change in the future as anthropogenic emissions are reduced. As with other experiments at CERN, CLOUD combines fundamental experiments and modelling - in our case, regional and global climate models - within a single team of international researchers. CLOUD modelling studies by Dunne et al. (Science, 2016), and Gordon et al.  (JGR, 2017) showed that 27% of present-day cloud seeds are formed from ion-induced nucleation and 40% of pre-industrial - so approximately half of all nucleated cloud seed in the present day are ion-induced.

Last year, the CLOUD experiment had a 10-year anniversary to investigate the microphysics between galactic cosmic rays and aerosols-climate interactions. The pilot run was in November 2009. CLOUD results has significantly improved of the physical and chemical process understanding of secondary aerosol formation. As an example, the measurements of the formation rates and growth rates of atmospheric aerosol particles by CERN’s CLOUD experiment put global climate projections on more solid ground.