Run 3 started on July 5, 2022, and paused with the shutdown of the machine on Monday, November 28 at 6 a.m. CMS recorded an integrated luminosity of nearly 40/fb (see Fig. 1, making for a particularly fruitful startup run. 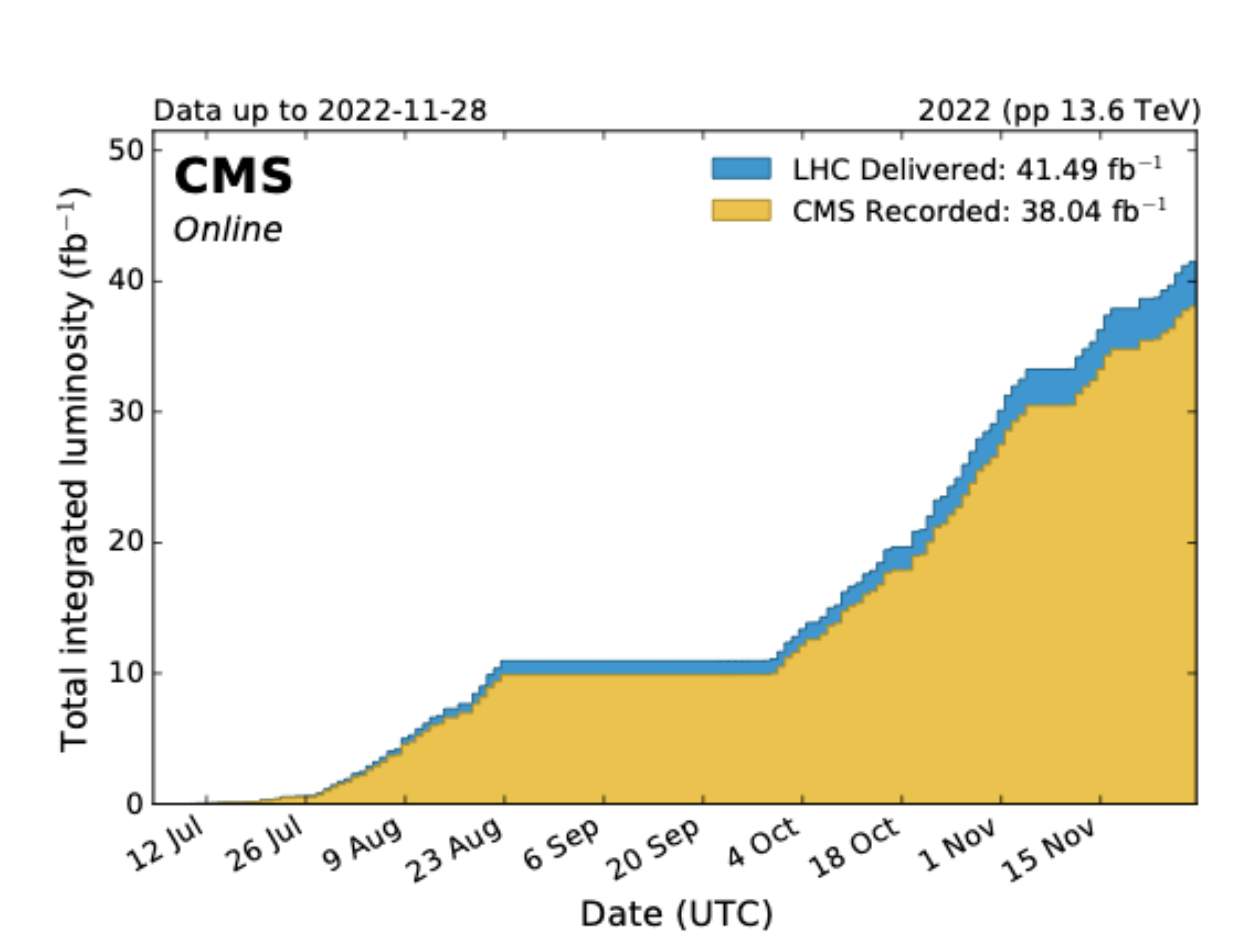 Figure 1: Luminosity delivered by LHC and recorded by the CMS experiment in 2022.

CMS underwent several significant transformations to prepare for Run 3. The barrel electronics of the hadronic calorimeter were upgraded with greater granularity, the pixel detector has a brand new innermost layer, and new luminometers and proton spectrometers were installed. An additional muon detector was installed to improve event selection capabilities for the HL-LHC phase (Fig.2). The data is also processed differently: a new data acquisition architecture has been put in place and the events are selected by GPU processors accompanying the CPU processors. 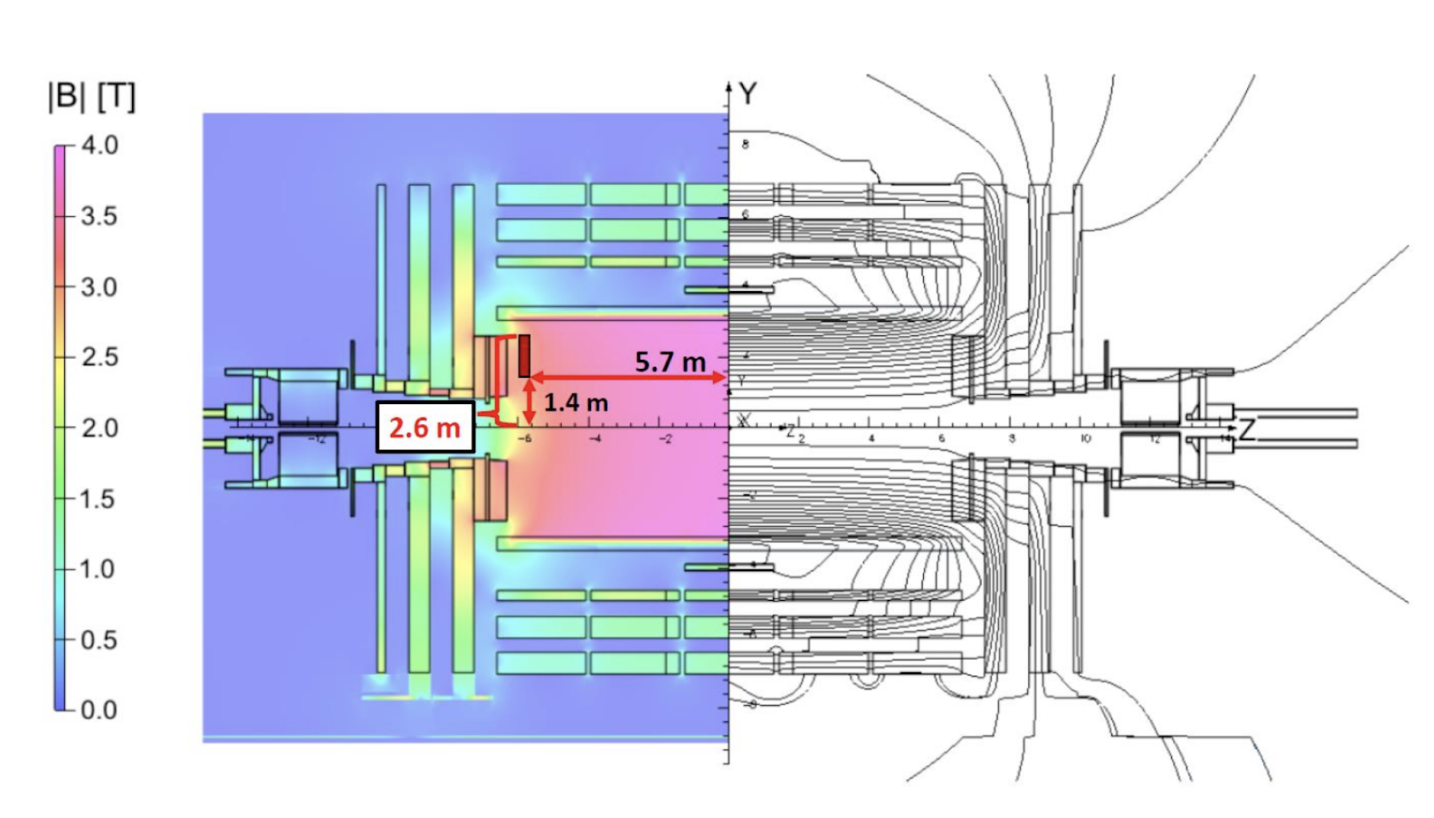 Figure 2: Schematic representation of the CMS experiment in the ZY-plane, with CMS Magnet field lines on the right of Y- axis, and on the left the magnitude. In dark red the new muon (GE1/1) station has been highlighted.

The first calibrations and alignment of the CMS detectors took place during the summer. These are crucial for our physics program and enable an accurate and correctly adjusted signal from the particles as they pass through each sub-detector. Then, during the few weeks of the LHC downtime needed to check the radio frequency system during September, CMS was able to continue its activities thanks to cosmic rays and the possibility for CMS to stress the apparatus by injecting particle-like signals in order to evaluate its limits.

All of these measurements and calibrations made the restart in September very efficient. Luminometers and beam condition monitors were operational and calibrated thanks to dedicated time with special LHC configurations. The tracker measured particle trajectories  with excellent precision, typically of the order of a few tens of microns. The calorimeters performed well during the run, except for a water leak during the second week of September that forced 7% of the positive end cap to be turned off until the end of the data taking. While the global impact on physics remains small, a repair is foreseen during the winter shutdown, when the CMS detector can be opened for several weeks. With efficiencies above 90%, the muon system also performed very well during this first year of Run3. The excellent performance of the CMS detector combined with the high luminosity recorded allowed CMS to present its first Run 3 physics results, including the rate of top-quark pair production, as illustrated in Figure 3. 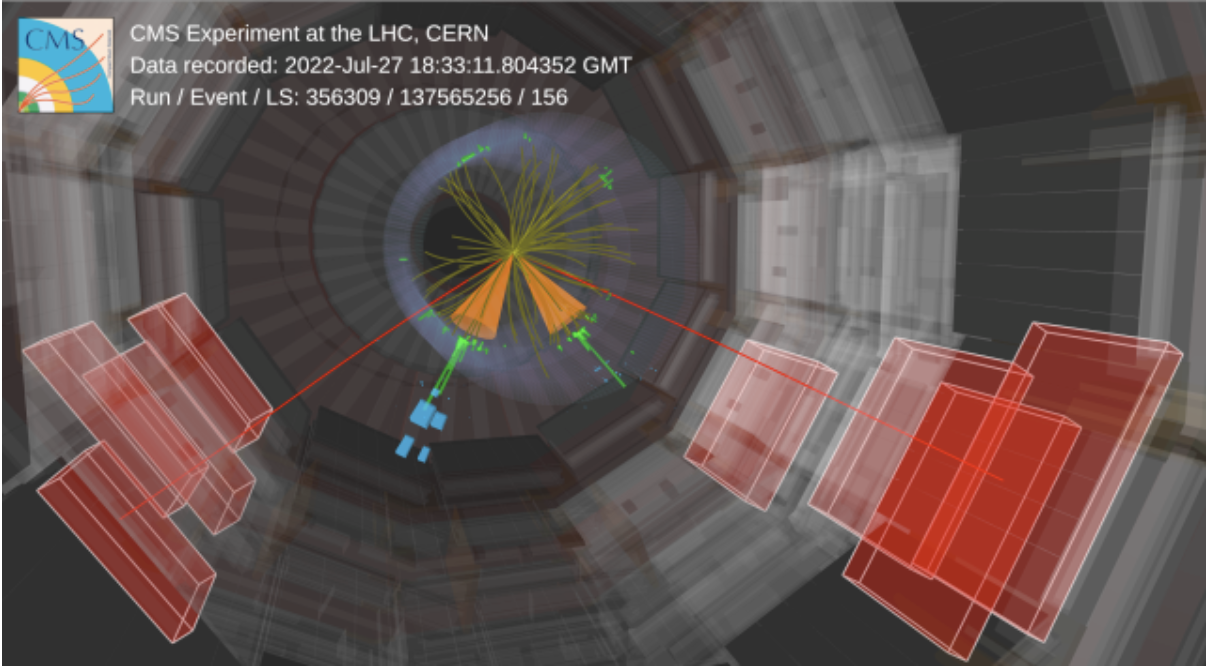 The last few weeks of the 2022 run also allowed the LHC to push its limits. As a result, several records have been broken. Thus, on November 21, the highest instantaneous peak luminosity, 2.5 10-34cm2s-2 was reached. The maximum number of collisions in the same beam crossing also approached 110 in CMS, nearly double the average during a routine operation at 55. CMS successfully recorded these data, proving the resilience of the full system during extreme conditions. Finally, on 18 and 19 November, heavy ion beams were brought to energy 5.36 TeV for the first time. CMS concentrated its efforts to identify the operational settings for the ECAL, pixel and tracker subdetectors, demonstrating its ability to process data through the full chain from trigger through reconstruction in the CMS Tier-0 facility. The 2022 PbPb program can therefore be considered a success and an important milestone for optimizing data taking for the 2023 PbPb run. 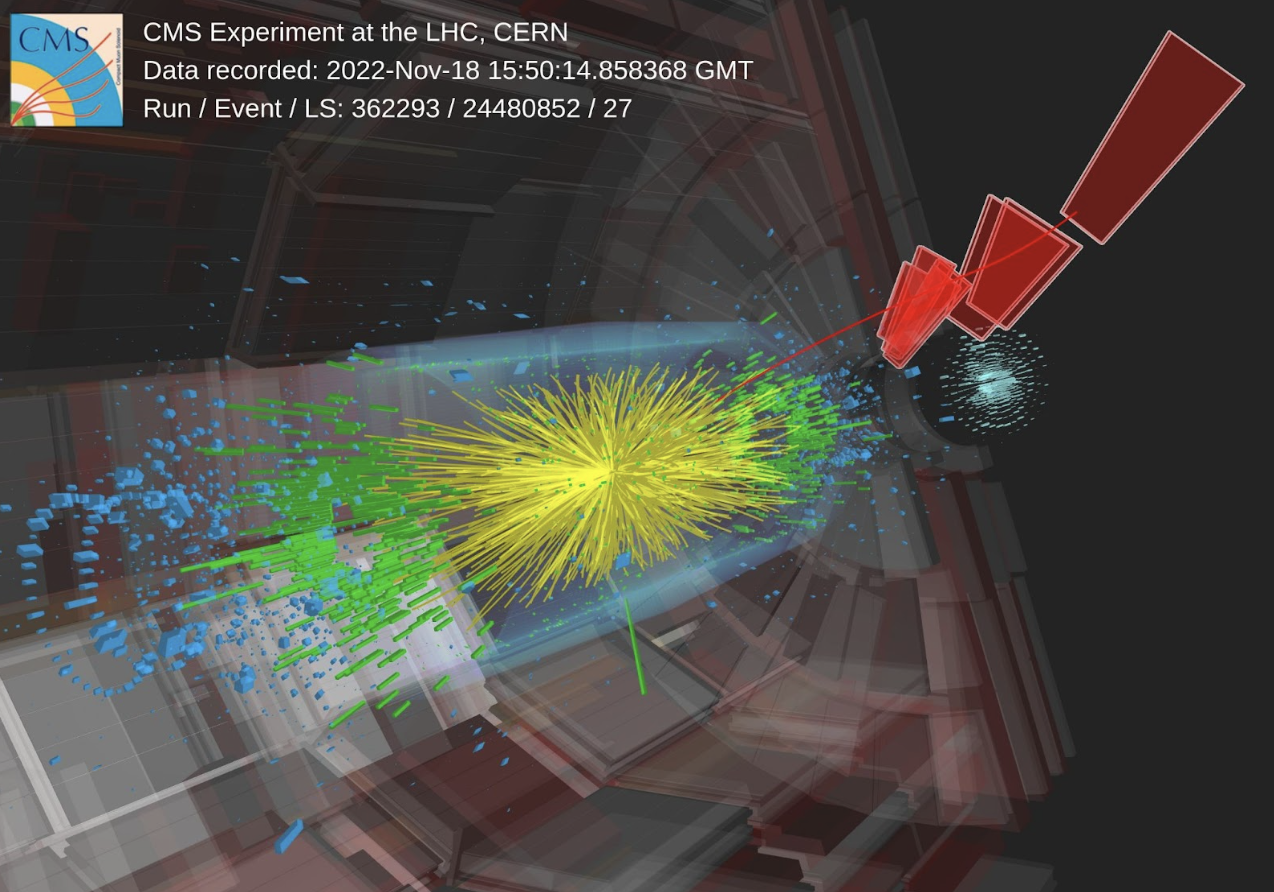 Figure 4: Visualization of a lead-lead collision recorded by the CMS detector on November 18, 2022.

With an overall data taking efficiency of around 92%, also comparable to the 2016 production year, CMS successfully recorded a significant data set for the vast Run 3 physics program. While the winter shutdown just started, the CMS teams are already preparing for the future and eagerly waiting for the beam to come back in spring next year to pursue this big endeavor. 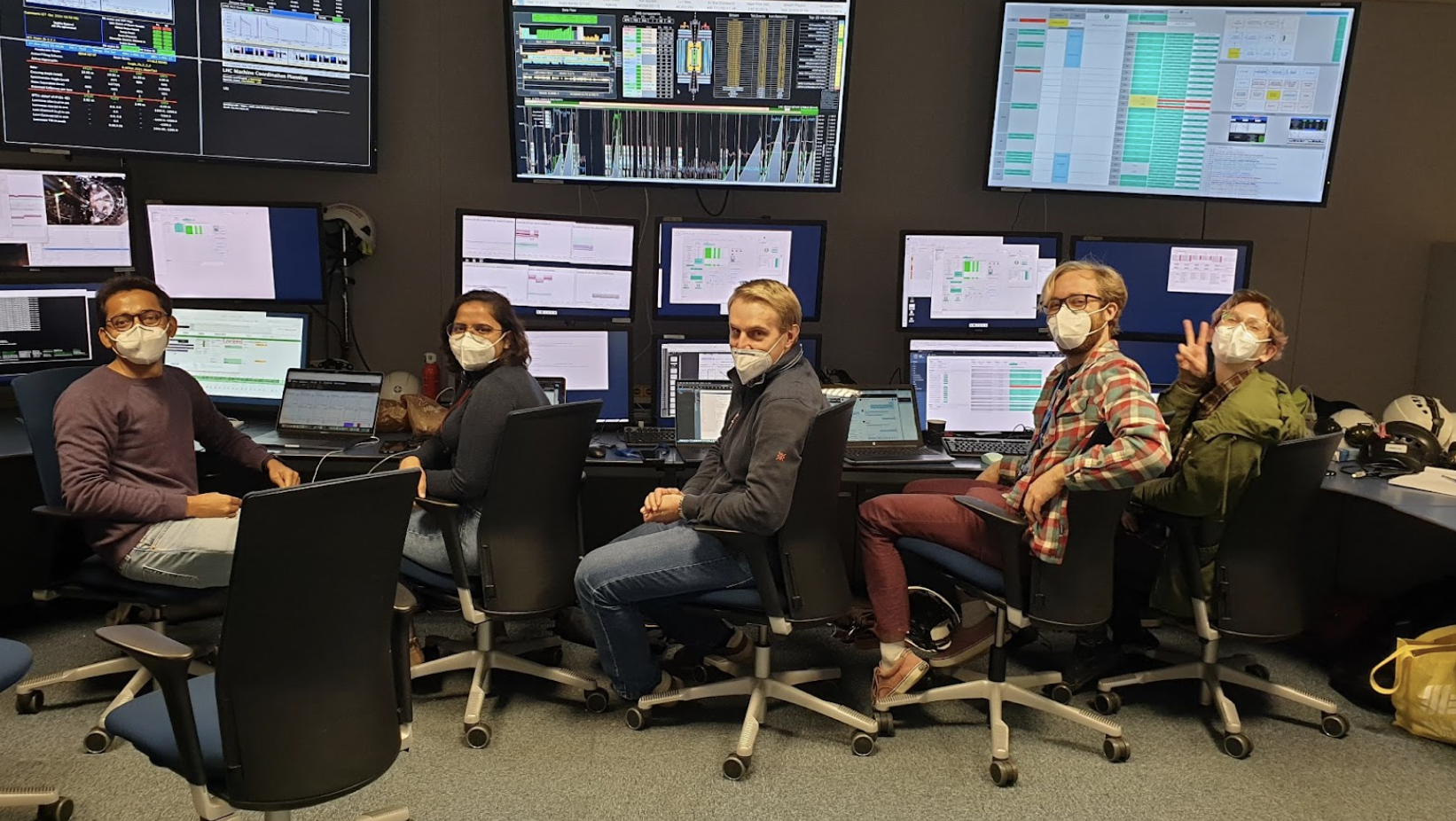