Cooling a particle from a trap away 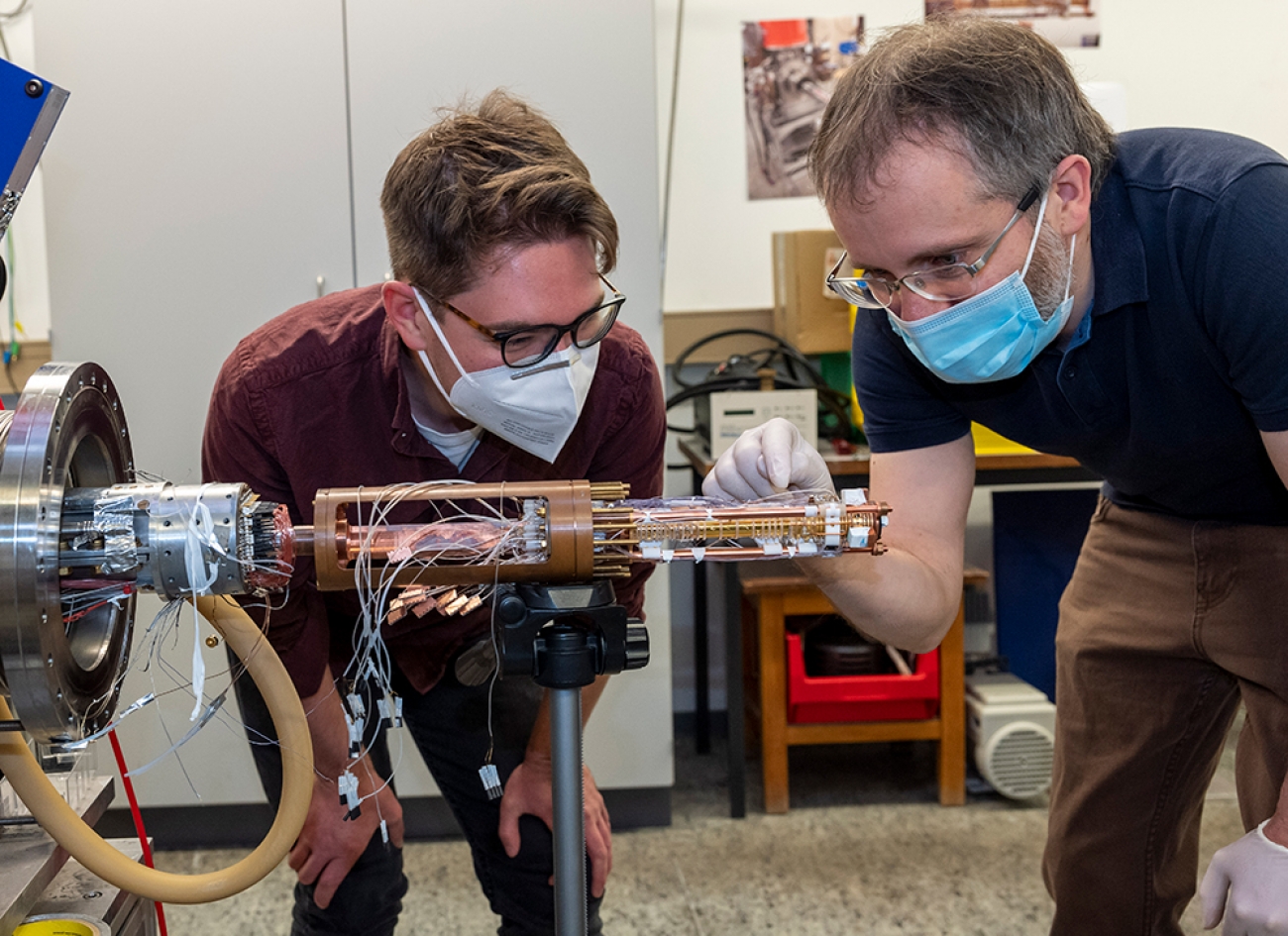 The BASE experiment, located at CERN’s Antiproton Deccelerator (AD) performs some of the most precise measurements with antimatter in the world – namely measuring the magnetic moment and charge-to-mass ratio of a single trapped antiproton. With these measurements, BASE, along with other experiments at the AD, is attempting to solve one of the largest mysteries in physics today. While the Standard Model (SM) is hugely successful and predicts many physical quantities to shocking accuracy it still fails to explain the well documented abundance of matter over antimatter in our universe.

The BASE experiment’s approach of performing high precision measurements with single trapped particles has proven to be largely successful, producing some of the most precise measurements with antimatter and placing stringent limits on potential violations of CPT (Charge-Parity-Time) Symmetry which serves as a foundation for all quantum field theories. At CERN, currently the world’s only source of low energy antiprotons, a beam of protons is accelerated to 26 GeV, hits a high density target, and emits a beam of 3.6 GeV antiprotons. These antiprotons are then decelerated by the AD to 5.3 MeV, and now with the recently online ELENA facility are further decelerated to 100 keV before sent to the different experiments. In the case of the BASE experiment, these antiprotons are finally trapped and cooled by a cryogenic resonant circuit to around 4 K or 0.3 MeV – an impressive reduction in energy of around 13 orders of magnitude.

While 4 K particle energies is a low enough temperature to perform highly precise measurements, it is a large impediment to reaching further precision – especially within the relatively noisy environment of the AD. In fact, other experiments with matter particles routinely prepare such particles in their ground states, enabling measurements that even exceed the precision of the SI system. While such experiments can be conducted without the technical limitations imposed by the large magnetic fields required by nearly all AD experiments, the fundamental piece of technology enabling such measurement is laser cooling. Relying on fast cycling optical transitions in atoms or ions, laser cooling uses the force of scattered photons to remove any excess motional quanta. Unfortunately, a single antiproton (or proton for that matter) has no such transitions.

Recently, in a result published in Nature, the BASE collaboration has demonstrated a new technique that allows particles with no accessible transitions, particularly antimatter particles, to benefit from the proven success of laser cooling. In a series of measurements performed by a team at the University of Mainz with the aim of developing new techniques with protons that can be applied to the antiproton experiment at CERN, researchers have demonstrated the first sympathetic laser cooling of a single proton. Since all particles that are amenable to laser cooling, to date, are positively charged, they cannot be stored in the same trap as antiprotons. As a result the  BASE-Mainz team has demonstrated a new technique that uses laser cooled particles in one trap to cool optically invisible particles in another trap – in this case over 9 cm away and limited only by the size of the trapping apparatus. 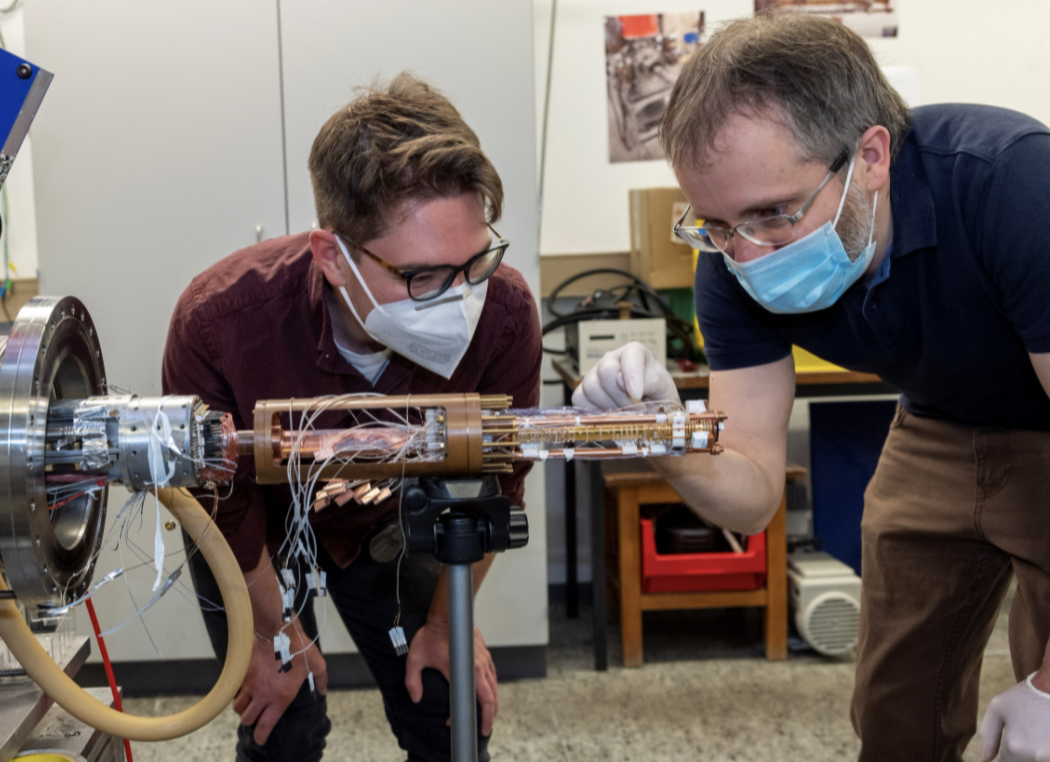 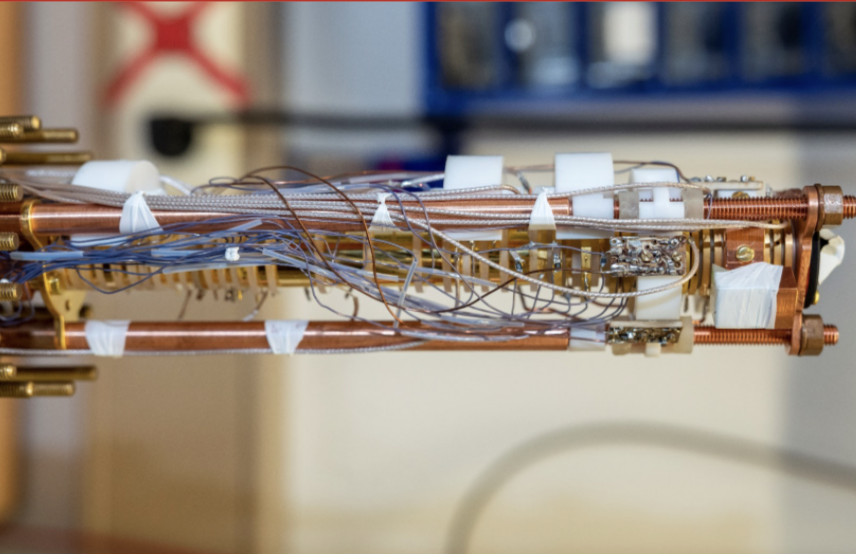 Figure 1. Top: Researchers inspect the trap apparatus mounted on a cryogenic stage in the outer vacuum chamber. The traps are hermetically sealed by an additional copper chamber before sliding into a superconducting magnet (not shown) to the right. Bottom: Individual gold plated electrodes form a series of five traps, along with additional electrodes used for transporting the ions along the trap stack. Thin wires have low thermal conductance but allow the DC voltages used for trapping and the RF voltages used for particle manipulation to travel from room temperature to the electrodes. Credits: Stefan F. Sämmer (JGU Mainz)

The technique developed uses image currents, induced by the motion of a trapped particle, to couple the two traps. Proposed over thirty years ago and with pursued with renewed interest recently, the idea is that the laser cooled particles essentially damp the motion of the hot particle with the trap electrodes, connected by a wire, acting as a spring connecting the two systems. The exchange of these image currents though is very slow – at the Hz rate or below although very low temperatures are achievable. The innovation of the recent work by the BASE collaboration is to enhance this image current coupling through the use of their highly sensitive cryogenic detection systems – using a resonant LC circuit to act as the coupling spring.

Figure 2. Illustration of the two trap system. A single proton is stored in one trap while a cloud of laser cooled Be+ ions is stored in another. The image current detection systems used precision measurements of motional mode frequencies resonantly couples the two traps. The frequency spectrum of the system, shown on the right, is that of three equivalent LC circuits. On resonance, the induced image currents short the noise of the LC circuit and allow energy to be exchanged between the two traps.

The group demonstrated the coupling effect in two measurements, first by showing the coupling of the particles at equilibrium and then by transferring energy from an excited particle in one trap to the other. This transfer of energy through the resonant circuit connecting the two traps then enabled laser cooling of the proton which was characterized varying the number of laser cooled beryllium ions and measuring the resulting proton temperatures. 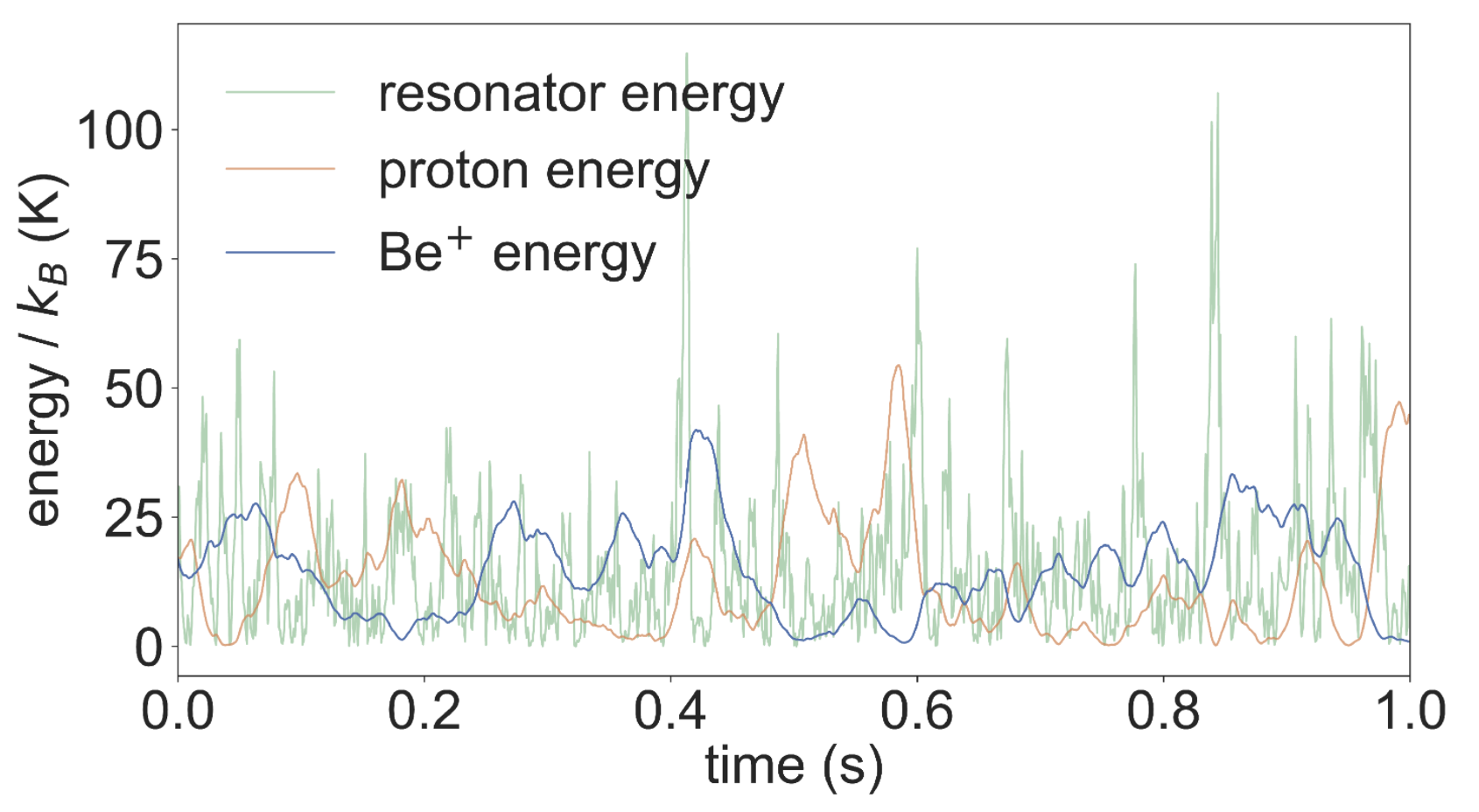 Figure 3. The system of the proton trap, Be+ trap, and cryogenic resonator act as three coupled oscillators. Simulations provide additional insight into the time domain behavior and energy oscillations between the three oscillators can be clearly seen. The visible noise comes from the noise of the resonator consisting of amplifier noise and Johnson noise, together at an equivalent noise temperature around 17 K.

Figure 4. To demonstrate the remote cooling a could of Be+ ions brought into resonance with the cryogenic LC circuit and a single proton, when laser cooled the Be+ ions sympathetically cool the proton. A variable trap anharmonicity, ΔTR, causes the measured motional frequency of the proton to depend on its temperature. As the proton is cooled further the frequency shift becomes larger and the slope shown on the right increases.

A challenging new technique and a new frontier

Experiments with laser cooled ions have been prominent for decades now, resulting in the trapped ion platform becoming one of the leading candidates for quantum information architecture. Until now though, these experiments have been largely separated from precision fundamental physics experiments – especially those performed in the types of ion traps used at CERN for example the Penning trap experiments prominent at the AD and ISOLDE facilities. In the case of the BASE experiment, highly precise measurements have relied heavily on ultra high quality resonators (Q~20,000) that are used to determine the motional frequencies of a single trapped proton or antiproton. With these devices, motional frequencies can be stabilized and measured with sub-Hz precision – far better than is typically done in quantum information experiments.

By using these resonators to couple separated ion traps the best of both worlds is possible: highly precise measurements of fundamental properties in a precision Penning trap and laser based operations on convenient species in another. This comes at cost though, when using a single resonator, the same Hz level motional linewidths that make precision spectroscopy possible limit the coupling strength to similar levels, albeit benefiting from the enhancement due to many coolant ions. In fact, while the basic remote cooling technique has been proposed over three decades ago now, only recently has progress in trapping and detector technology made it feasible. 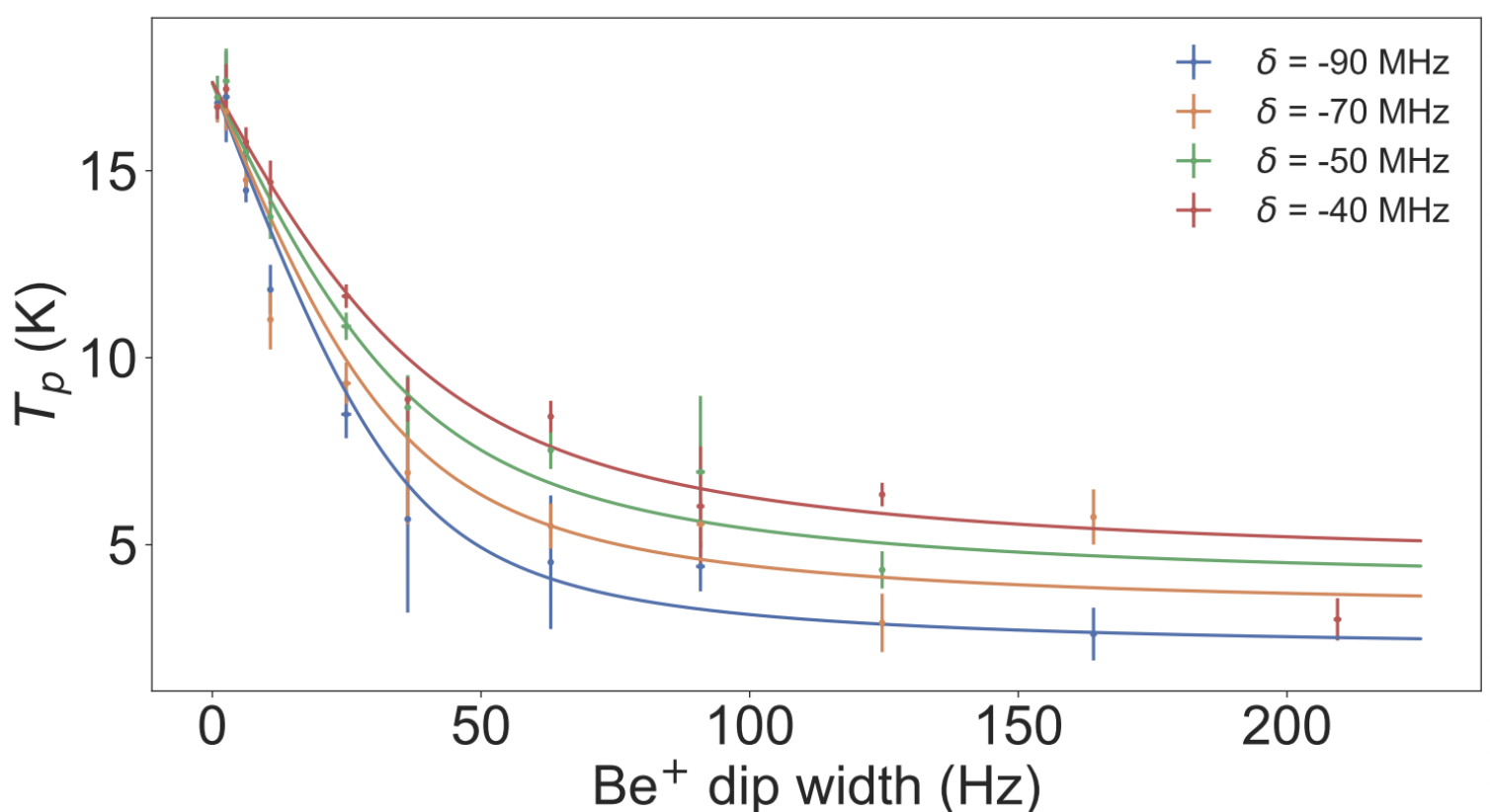 Figure 5. Using a series of measurements as in Figure 4, the temperature of the remotely cooled proton can be tuned by varying the number of laser cooled ions (measured by the dip width) and the efficiency of the laser cooling (characterized by a detuning δ.

A bright future with cold particles

Large gains in experimental precision seem just around the corner with this new technique. As a next step, the University of Mainz teams is looking to see just how low they can reduce the energy of the trapped proton and ultimately seek to improve the measurement of the magnetic moment of the proton. Currently at 0.3 parts-per-billion (ppb), a measurement at the parts-per-trillion (ppt) level seems possible within the next few years. Importantly though, the recently demonstrated technique can be readily applied to the experiment with antiprotons at the AD and even beyond, for example with other exotic species like highly charged or molecular ions. Antiprotons are currently cooled by over 10 orders of magnitude (i.e. for the antiproton beam) – what more is possible? By coupling to laser cooled ions in a far away trap and at higher rates than previously imagined the answer seems to be quite a bit potentially even pushing antimatter physics into the quantum realm previously only explored by atomic systems.