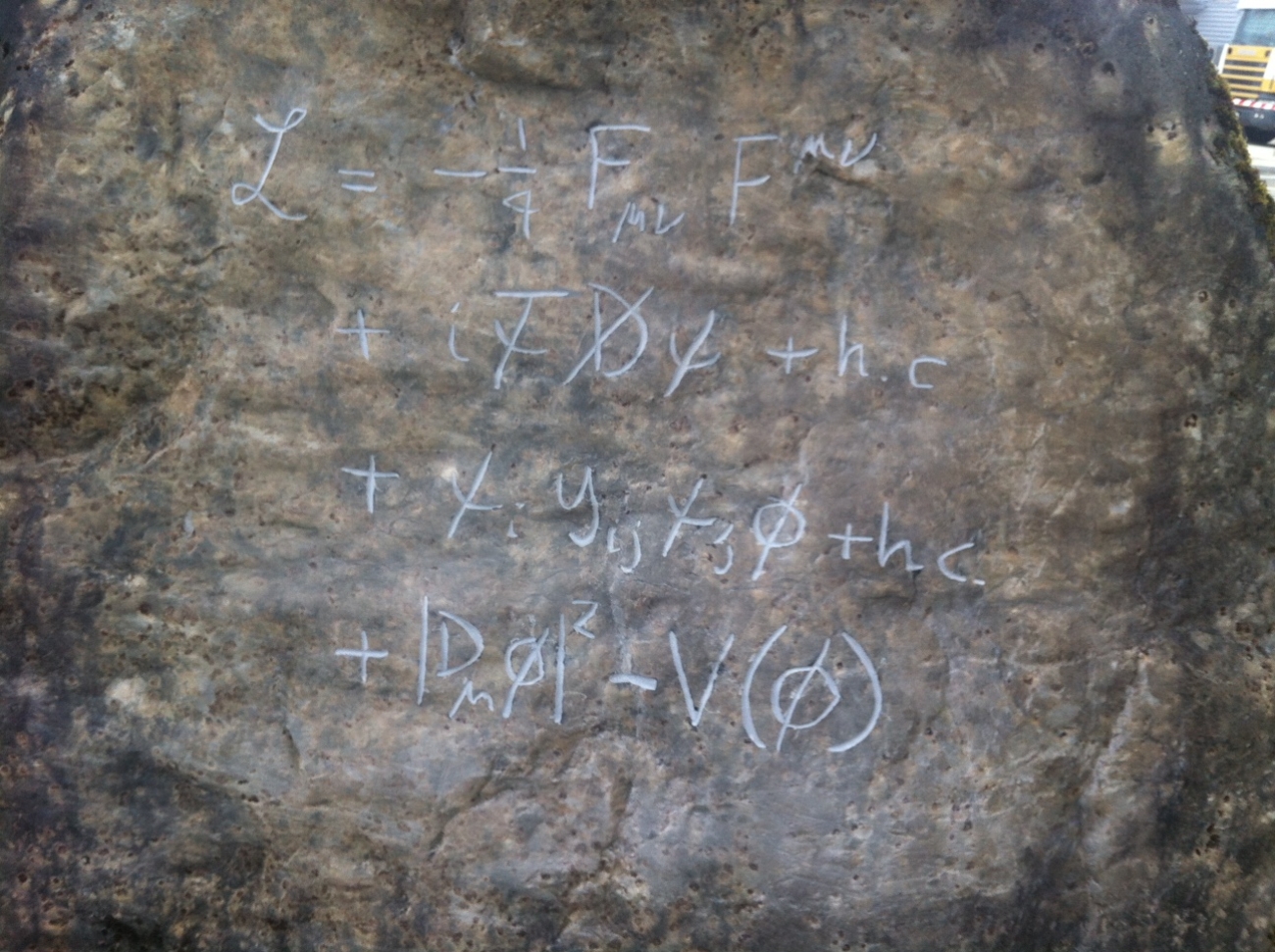 July 23rd 2021 was a sad day for the world of theoretical physics, which witnessed the passing of three giants of the field: Steven Weinberg, Toshihide Maskawa and Miguel Virasoro. Weinberg and Maskawa were awarded Nobel Prizes for their contributions to the Standard Model of particle physics, while Virasoro was a founder of string theory and made many major contributions to mathematical physics. In this short note I express my personal appreciations of Weinberg and Maskawa, whose research has had the most direct impact on the work of most readers of this newsletter.

Weinberg is of course best known to readers for the work that earned him the Nobel Prize, in which he synthesised the formulation of spontaneous symmetry breaking in gauge theories by François Englert, the late Robert Brout and Peter Higgs with the model-building insight of Sheldon Glashow into the Standard Model of particle physics, an advance made in parallel by the late Abdus Salam. Englert and Higgs shared the 2013 Nobel Prize, which was awarded after CMS and ATLAS discovered the Higgs boson, while the Nobel Prize Committee had had the bold foresight to award the Nobel Prize to Glashow, Salam and Weinberg already in 1979, before even the discovery of the W and Z bosons, which earned the Nobel Prize for Carlo Rubbia and the late Simon Van Der Meer in 1984.

After winning the Nobel Prize, Weinberg visited CERN where he gave the seminar “The rise and fall of baryon number" (Credits: CERN).

Weinberg’s 1967 Standard Model paper is a model of rigour and clarity, two of the characteristics that he brought to all his theoretical research as well as to his many articles and books sharing particle physics and cosmology with wider audiences. His paper was called “A Model of Leptons” - in those pre-QCD days there was no calculable theory of the strong interactions - and as well as the masses of the intermediate vector bosons Weinberg discussed explicitly the couplings of the Higgs bosons to electrons and muons. It is poignant that he passed away shortly after LHC experiments published evidence for the Higgs-muon coupling. 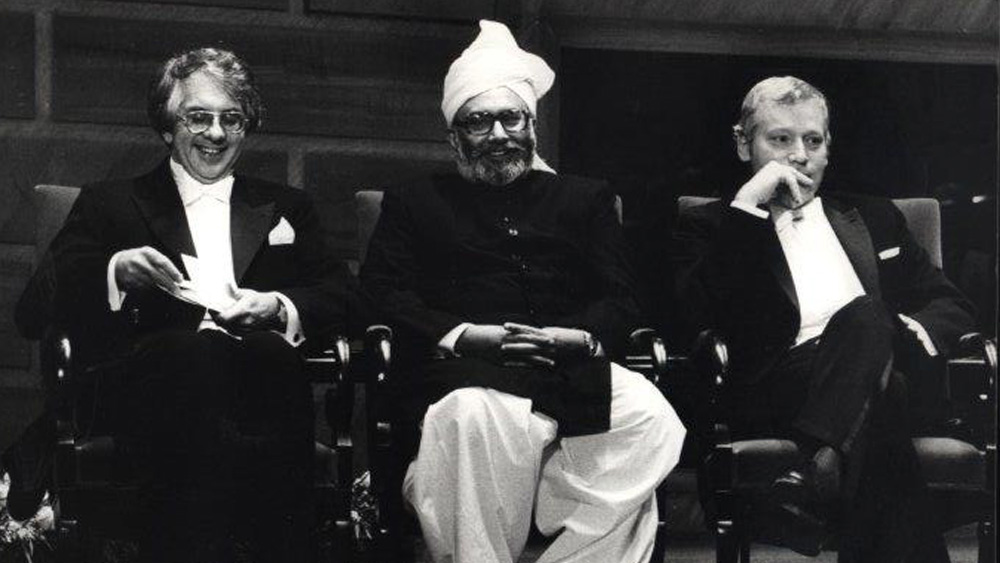 In 1979 Abdus Salam, Sheldon Glashow, and Steven Weinberg were awarded the Nobel Prize for Physics for their contributions to the theory of unified weak and electromagnetic interaction between elementary particles. Nobel Laureates Ceremony in 1979. (Credits: Nobel Prize Foundation).

Weinberg also made many fundamental contributions to our understanding of the strong interactions, including his incisive formulation of the effective field theory of pions that encapsulates the chiral dynamics underlying QCD, and his systematic approach to the definition of jets in QCD (together with George Sterman) that is one of the foundations of much LHC physics. Looking beyond the Standard Model, he was a pioneer of the axion (in parallel with Frank Wilczek), showed (together with Howard Georgi and Helen Quinn) how the Standard Model gauge couplings could come together in a grand unified theory and make possible an intriguing prediction for the electroweak mixing angle, and showed how baryons could decay and neutrinos acquire masses in effective field theory extensions of the Standard Model.

Weinberg also maintained a longstanding interest in gravitation and cosmology. He derived the equality of gravitational and inertial mass from general principles of scattering theory, he made (together with the late Ben Lee) a pioneering calculation of the relic density of a cold dark matter particle, and he provided an anthropic prediction for the possible magnitude of the cosmological constant, which agrees with the value measured a decade later by astrophysicists and cosmologists. His approach to gravitation and cosmology was that of a dyed-in-the-wool quantum field theorist, as he set out in a very influential treatise on these subjects. Equally influential with a general audience was his popular book “The First Three Minutes”, which did much to familiarise non-experts with Big Bang Cosmology.

Weinberg wrote many other books for specialists and also for general audiences. In particular, his series of textbooks on quantum field theory have been theoretical physics professors’ preferred instruments of torture for many generations of graduate students, and he has also written textbooks on astrophysics and quantum mechanics. Beyond such specialised texts, his other writings established his profile as one of the most prominent scientific and philosophical public intellectuals in the United States. He was, in particular, one of the leading advocates for the SSC project, arguing its case with his characteristic lawyerly logic and precision, and later situated its demise in the context of a general decline in funding for scientific research, education, healthcare, infrastructure and justice. He also wrote frequently for such journals as the New Republic and the New York Review of Books, facing up to perceived cultural adversaries of science.

Bolstered by the depth of his thinking about subjects on which he developed opinions, Weinberg exuded confidence in their correctness, and did not suffer gladly those who thought differently. Thus, he was a staunch defender of the scientific method, its conclusions and the general progress of science. He was a strong proponent of relativity (special and general) and a strong opponent of relativism, particularly as preached by some historians of science. Weinberg’s philosophical standpoints might strike some as rather stark: he was certainly quite courageous personally as well as intellectually. He also opposed strongly a law allowing the concealed carry of guns in classrooms at the University of Texas, where he was professor until his passing.

In contrast to Weinberg, Toshihide Maskawa was less known, at least outside Japan, in particular because his first foreign trip was to receive the Nobel Prize, and he did not speak English. Maskawa was justly famous among particle physicists for his 1973 paper with Makoto Kobayashi that showed how CP violation would appear naturally in the weak interactions in the Standard Model with three generations of quarks. Their paper sprang to prominence when the tau lepton was discovered in 1975, leading to the expectation that there should be two more quarks heavier than charm. 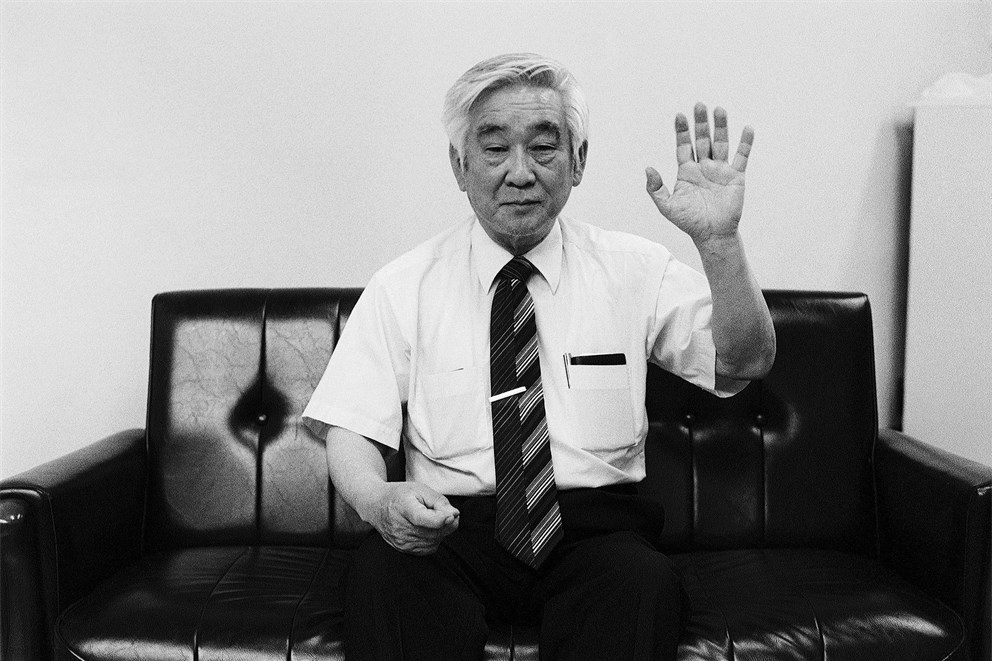 Portrait photo of Toshihide Maskawa, who was awarded one quarter of the 2008 Nobel Prize in Physics "for the discovery of the origin of the broken symmetry which predicts the existence of at least three families of quarks in nature. Credits: Linday Nobel Laureate Meetings.

At the time, the only known CP violation was in the mass matrix mixing neutral kaons, but the Kobayashi-Maskawa model suggested that there should be other manifestations of CP violation, in particular in the decay amplitudes of kaons to pions, which was discovered at CERN over 20 years later, and also in the decays of B mesons. The B factory experiments Belle and BaBar discovered CP violation in a number of different B-decay channels, and their measurements were in excellent agreement with the predictions of the Kobayashi-Maskawa model, triggering the award to them of the Nobel Prize in 2008.

Theorists expect there to be other sources of CP violation beyond that suggested by Kobayashi and Maskawa. In general, one could expect CP-violating effects in the strong interactions, but these would be exorcised by the proposed axion that was mentioned above. One would also expect CP violation in the mixing and oscillations of neutrinos, and there are extensive experimental programmes in the US (DUNE) and in Japan (T2K and Hyper-Kamiokande) designed to probe this possibility. Moreover, the Russian physicist Andrei Sakharov suggested that the cosmological asymmetry between the density of matter and antimatter could be due to CP-violating processes in the early Universe. The Kobayashi-Maskawa mechanism would not have been sufficient to generate the measured asymmetry, so more CP violation is needed, perhaps associated with neutrinos.

Until recently, the Kobayashi-Maskawa model has continued to reign supreme, but there have been a couple of new measurements by the LHCb Collaboration that may challenge it. One is the observation of CP violation in the mixing of neutral D mesons. This was expected at some level, but the amount measured strikes some as surprisingly large. Time will tell whether this is an indication of some additional source of CP violation. Another, recent development has been the strengthening by LHCb of previous indications of violations of the expected universality of the decays of B mesons into strange mesons and μ+μ- or e+e- pairs. If confirmed, this would require revision of the picture of flavour dynamics in the Standard Model of which the Kobayashi-Maskawa model is just one aspect. The Standard Model has also been challenged recently by the confirmation by a Fermilab experiment of a previous Brookhaven measurement of the anomalous magnetic moment of the muon that is in apparent tension with calculations in the Standard Model.

Steven Weinberg and Toshihide Maskawa must have heard about these exciting new experimental results. Sadly, they cannot share their thoughts about them. However, whatever the outcomes of these challenges, we should celebrate the fact that the Gold Standard for comparison is the Standard Model that they did so much to construct.

To close my appreciation of their work and lives, here is a memorable quote from Weinberg:

“If there is no point in the universe that we discover by the methods of science, there is a point that we can give the universe by the way we live, …”