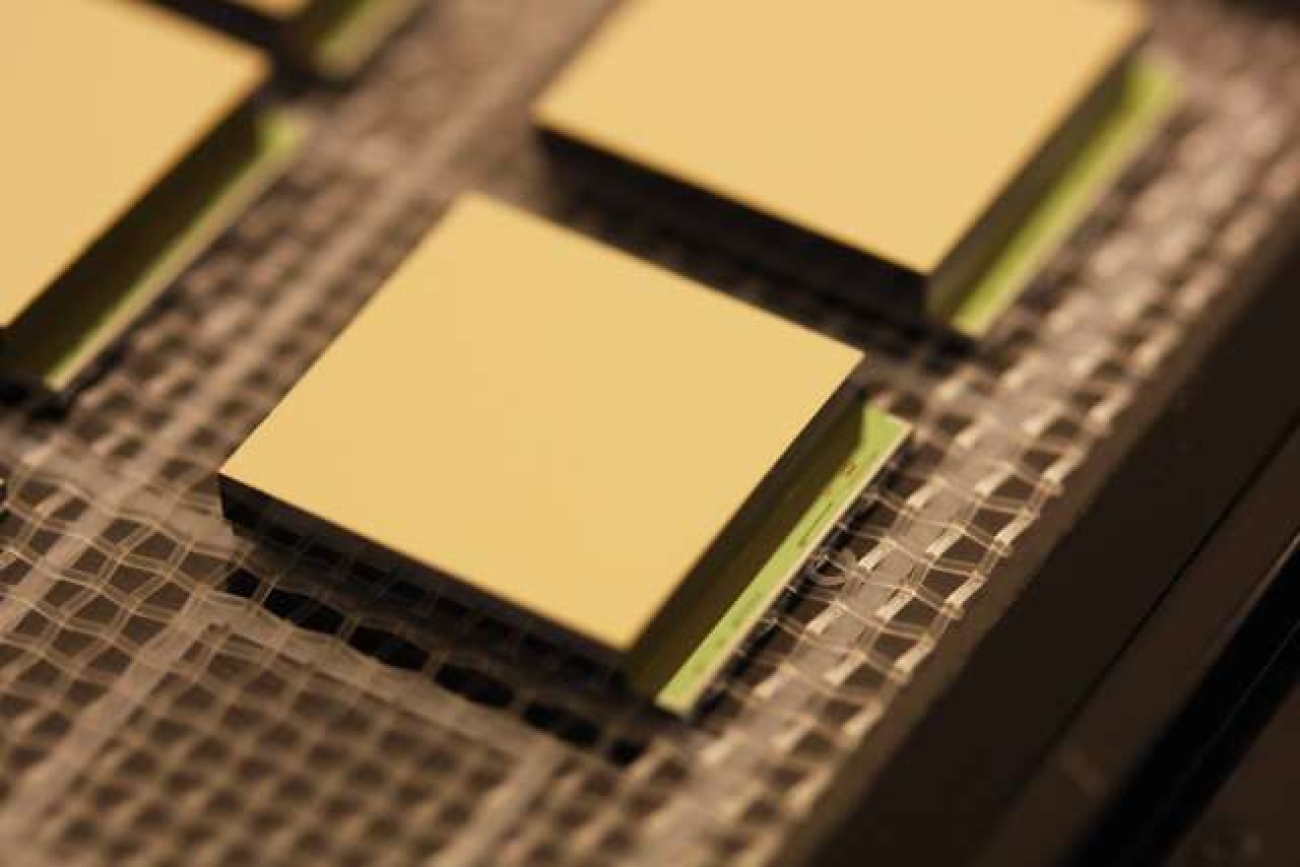 A dedicated workshop on Medical Applications of Spectroscopic X-ray Detectors took place at CERN  from 29th August - 1st September. It brought together more than 100 participants from a variety on institutions including prestigious medical schools, major medical equipment suppliers, small and medium sized enterprises as well as universities and research institutes. CERN is an ideal venue for such a meeting with its open international scientific culture and its technical expertise in radiation detection.

Since its establishment in 2011, this workshop has brought together specialists from different but related fields focusing on developing the new imaging modality of spectroscopic X-ray imaging (also known as “photon counting imaging”, a technology that makes colour computed tomography possible). The initial skepticism about the benefits of such an approach (and the associated technical challenges) has gradually given way to an acceptance that the approach has great potential, offering new avenues in diagnostic imaging.

The sixth workshop was opened by a keynote talk from Prof. Dushyant Sahani MD (University of Washington), vice president of the International Society of Computed Tomography. In his presentation he noted that the growth in CT scanning had reached a plateau in the last 10 years as the technology has matured and devices have reached an impeccable level of precision. The new imaging technique of spectroscopic X-ray imaging could give the field a new boost, leading it to new pathways beyond the current plateau. A key milestone in that direction is the approval by the US Food and Drug Administration (FDA) authority of “the first new major technological improvement for computed tomography imaging in nearly a decade,” in the form of a photon counting scanner from Siemens, Prof Sahani noted that CERN’s workshops have been instrumental in advancing this technology and bringing it from the lab to the clinic. This was also reflected in the statement by Steffen Kappler of Siemens, who led the development of their photon counting scanner: “I am convinced that institutions like CERN play an important role for innovations in medical imaging. Communities like the Medipix Collaboration and the SpecXray Workshop are essential instruments of our society, connecting and affirming researchers in academia and industry during the maturation and commercialization processes of disruptive detector technologies for medicine”.

A number of presentations from Mayo Clinic (who have extensive clinical experience with the Siemens scanner) highlighted the breakthrough nature of the modality in various imaging tasks. There were also impressive clinical talks from Prof Philippe Douek MD (working with a spectroscopic scanner from Philips) and Prof. Anthony Butler MD whose MARS scanner is based on Medipix3.

But what is the benefit of the new imaging technique over traditional X-rays imaging? The X-ray beams used in medical equipment contain a wide spectrum of X-ray energies, which can be thought of as different X-ray colours. In conventional detectors, the image taken is based on the total X-ray energy absorbed by each pixel, forming a kind of black and white image. When spectroscopic detectors are used in detecting the photons, the images also contain the “colours” of the incoming X-rays, providing better, clearer images.

According to Butler’s talk, one of two MARS Bioimaging Ltd scientists who built the scanner, the Medipix3 chip gave them an advantage in medical diagnosis: "Its small pixels and accurate energy resolution mean that this new imaging tool is able to get images that no other imaging tool can achieve". By counting photons one by one and classifying them by their energy (or colour), the material composition of each voxel in the image can be identified and clearer, diagnostically valuable images delivered to radiologists Among the confirmed benefits of spectroscopic X-ray detectors are improved spatial resolution, increased dose efficiency and the ability to carry out imaging of multiple contrast agents simultaneously. By combining the chip's spectroscopic information with advanced algorithms, the MARS scientists were able to create 3D color images that can distinguish clearly between fat, water, bone and plaster as shown on the image/video below. The improvement in soft tissue contrast compared with conventional X-ray scans may remove the need for MRI scans in some cases. Researchers have generated images of ankles and wrists, but eventually plan to scan full human bodies. Moreover, the technology could impact cancer drug development and to understanding heart disease and bone healt. 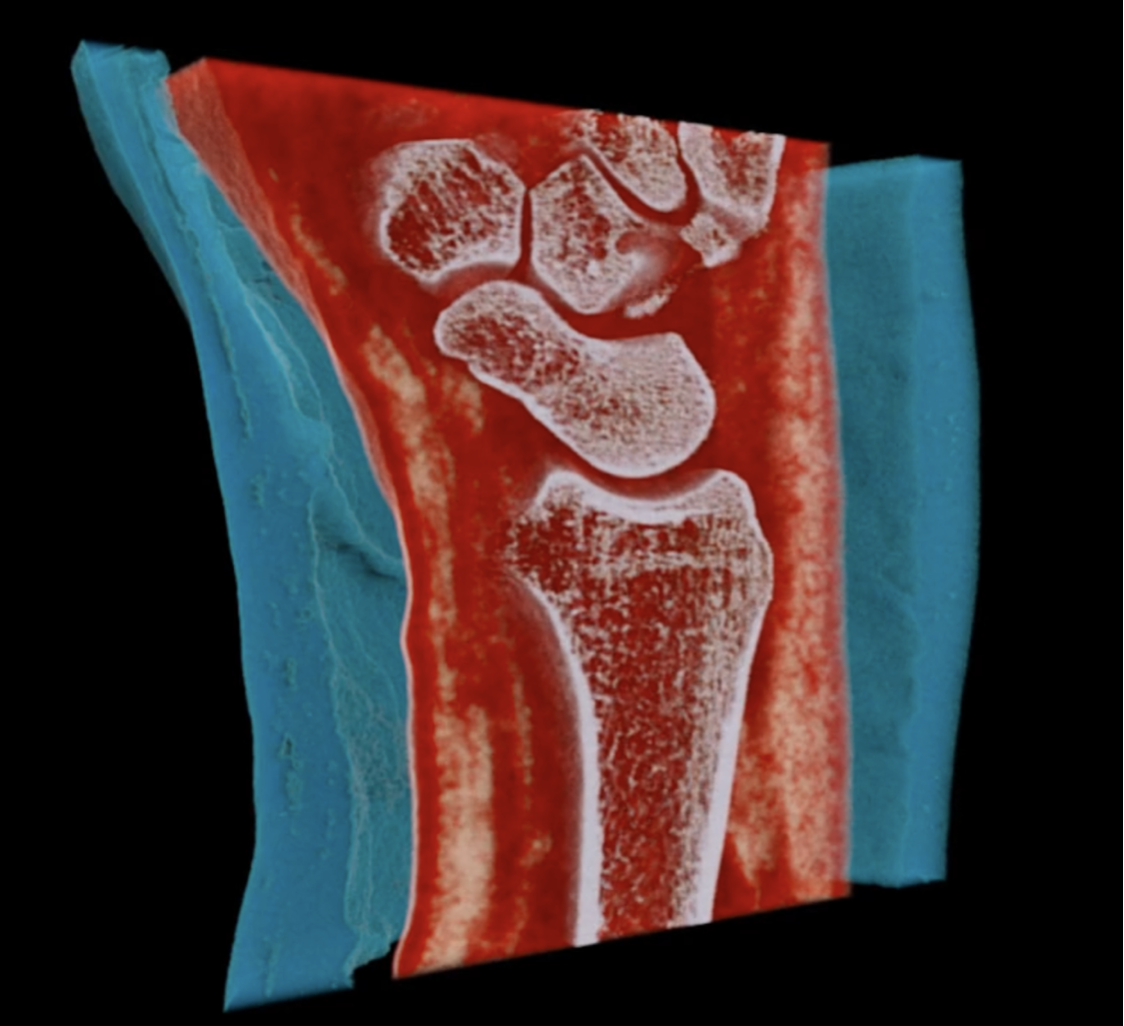 Material image (top) and movie (bottom) of a broken wrist in a plaster taken using the Medipix3-based MARS scanner. The plaster is coloured blue, water/blood is red, fat is yellow and bone is white. Image courtesy of MARS Bioimaging.

Another key achievement presented in the workshop concerns the use of heavy metal labelled biomarkers, used to carry out functional imaging using concentrations which are compatible with human imaging. This will probably become the most important feature of spectroscopic imaging from a clinical perspective, permitting quick (and therefore cheap) and safe diagnoses compared with PET and SPECT. Readout ASICs are, of course, a key element in the system and significant progress was reported from multiple groups many of whom have worked on detector readout for HEP. With more than 300,000,000 CT scans being performed annually around the world the potential impact for the spectroscopic X-ray imaging is huge.

A workshop summary talk was given by Anthony Butler in the form of a KT and Detector Seminar on Friday 2nd November in the Main Auditorium and on zoom. The slides and recording are available here: https://indico.cern.ch/event/1187351/