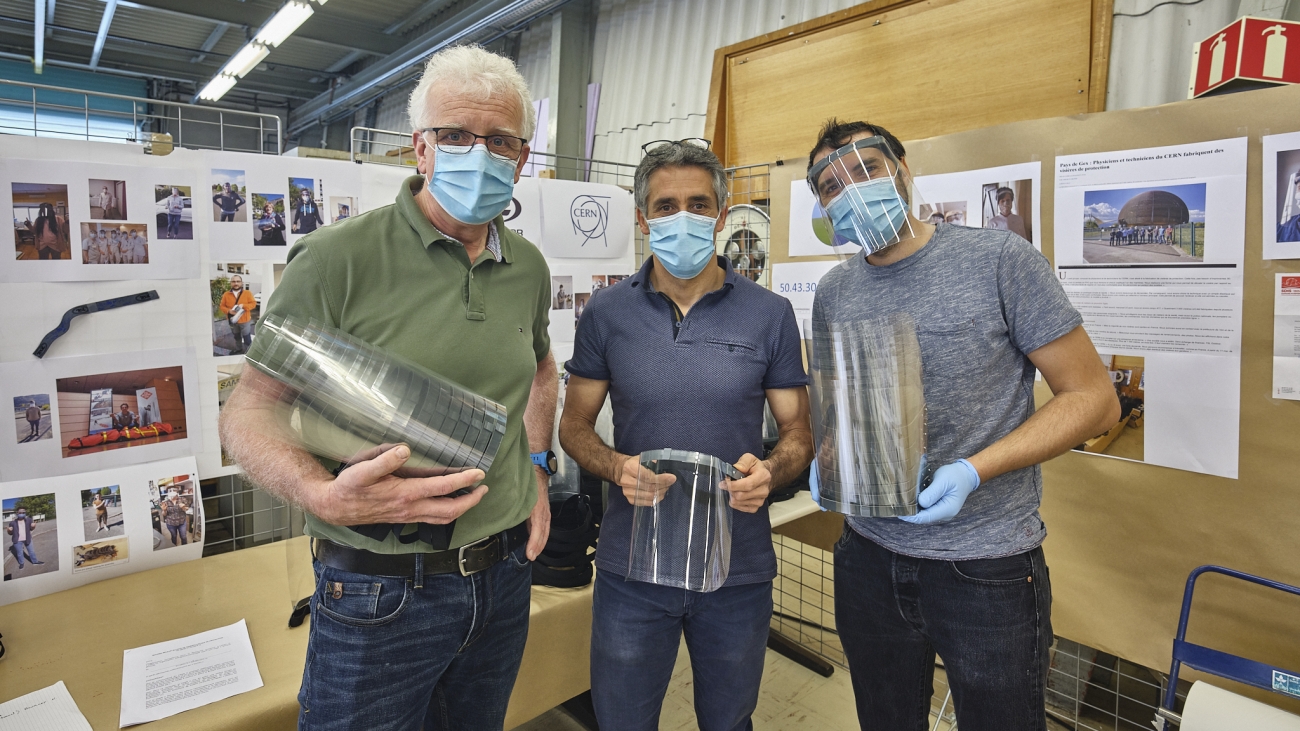 With the COVID-19 pandemic, all our lives and routines have changed, at both the personal and professional level. Worklife at CERN has been impacted by an important lockdown, where we all had to face new challenges in terms of work reorganization. Despite all the difficulties however, CERN managed to go well beyond carrying on the activities defined by its mandate, starting several projects that helped, and are still helping, the wider community in these difficult times.

One of the CERN Against COVID-19 initiatives was kicked-off by a handful of members of the EP-DT group, quickly attracting contributions from other groups and departments, as well as generating a cascade of parallel projects. The project resulted in the production of large quantities of face shields designed to limit the risk of contamination from liquid projections. Worldwide, many hobbyists, makers, and companies, put in operation their 3D printers for producing face shield supports. A limitation of this approach is the throughput of an average 3D printer, with a production often restricted to few units per day.

The detector technology group benefited of decades of experience and  practical knowledge in engineering, to design a face shield that could be quickly deployed to a large scale production. Starting from simple and cheap materials that were all readily available in the CERN stocks, the first visor prototype was produced overnight by just two people. Within 2 days, the production was already in the order of several dozens units per day reaching, after few weeks, a daily production of more than 1000 units.

The base design makes use of a simple support made of thermoformed PVC, to which an elastic headband is fixed with common pop rivets. A transparent polyester visor shield is then attached to the support with custom made plastic clips, resulting in a total weight of just 34 grams - for maximum comfort. During the production, the group developed several variants, accommodating different requests from health professionals, such as adjustable headbands, removable and washable visors and a fully sterilizable model with a silicone moulded headband. The Occupational Health, Safety and Environmental Protection unit at CERN has approved the face shield design.

A total of more than 15,000 face shields were produced within a timeframe of a little more than one month. These were freely distributed to different French and Swiss entities, notably hospitals, medical professionals, frontline workers and retirement homes, with the involvement of local authorities. More than 2500 units were as well supplied to the CERN stores, to be distributed to CERN personnel during the ramp-up phase. CERN benefitted as well from the support in kind of several companies, in particular TSL and Petzl that have provided several kilometres of elastics free of charge.

While helping the community in these times, this activity proved to be a unique team-building exercise. Engineers, technicians, physicists, students and department leaders from all over CERN joined together in this effort. The memories and the experiences of the weeks spent in this effort, will live on well beyond the fallout of this pandemic.