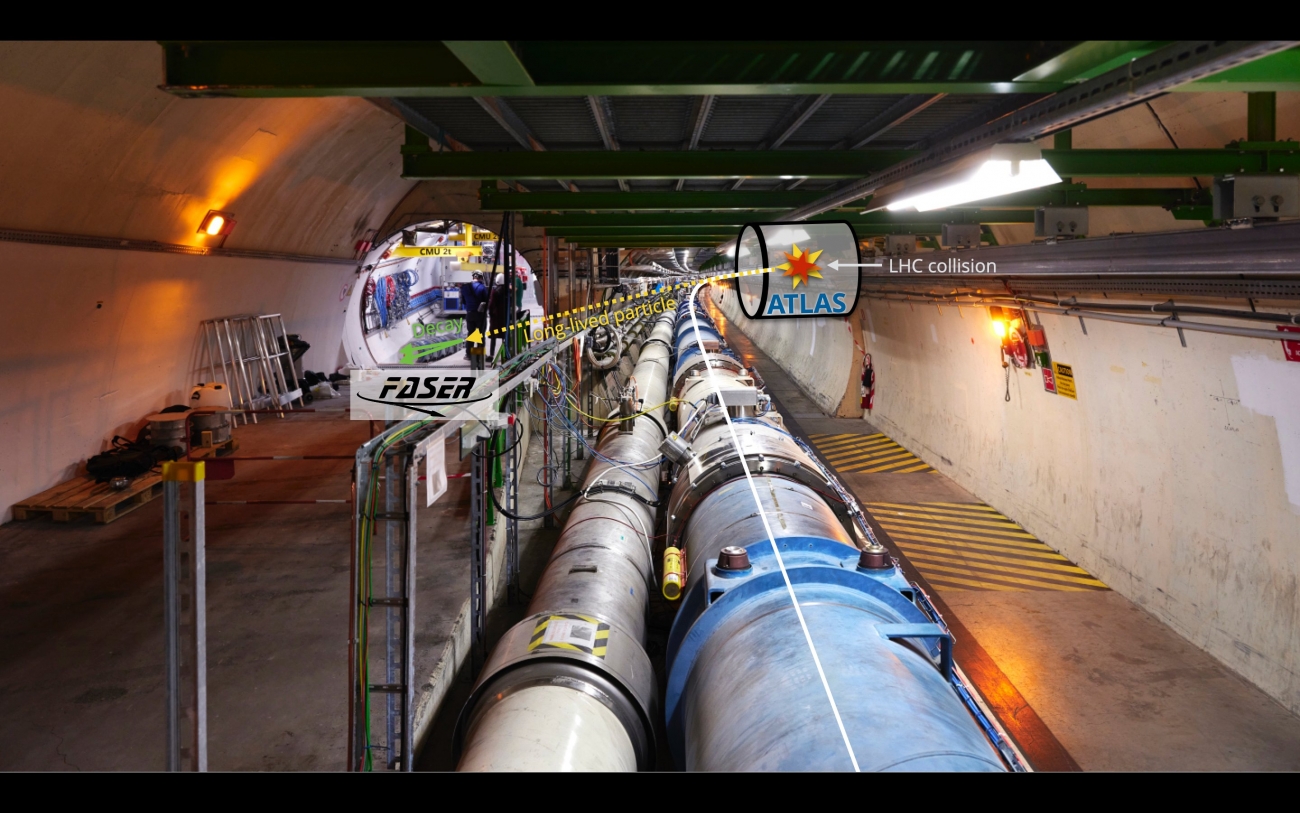 During March the FASER detector was successfully installed into the LHC complex. FASER, a new small LHC experiment, designed to search for light, weakly interacting new particles in the LHC collisions was proposed in 2017, and after review by the LHCC, approved by CERN in March 2019. Since then, the FASER team have been busy finalizing the detector design, constructing and testing the detector components. FASER has been able to progress so quickly in part by re-using spare detector parts from the ATLAS and LHCb experiments.  The FASER detector components were included in a near-full system test on the surface in September 2020, before the start of the detector installation.

Since FASER is installed in a side tunnel of the LHC (about 500m along the LHC tunnel from ATLAS) access to the area is only possible when there is no other work going on in that sector of the LHC. To take into account the access constraints two month-long windows for the FASER installation were agreed with the LHC coordination – the first, for the installation of the FASER magnets and other infrastructure, in November 2020, and the second for the installation and commissioning of the detector components in March 2021.

During the November access period, the three FASER permanent magnets (two of 1m-long/1-tonne and the third 1.5m-long/1.5-tonne) were transported into the LHC tunnel to the FASER location. The magnets needed to be carried over the LHC machine and then installed into the FASER trench in TI12 using a dedicated crane that was installed specifically for the FASER installation. Once they were installed, the magnets were precisely aligned with the beam collision axis with help of the CERN survey team. During this access the FASER cooling unit (designed and constructed by the CERN cooling and ventilation group (EN-CV)) was also installed and tested in the tunnel. Finally, this access was used to lay the cables from the FASER electrical racks at the end of TI12 to the detector location – this cabling was done by colleagues from the EN-EA group. Figure 1 shows the TI12 tunnel at the end of the November 2020 installation window. 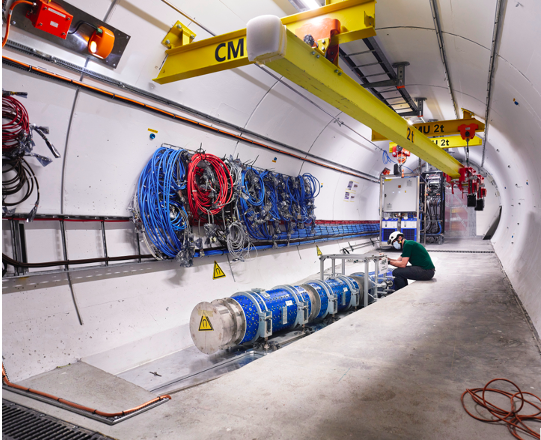 Fig.1: The TI12 tunnel at the end of the November 2020 installation window, with the three FASER magnets installed.

The access in March was used to install the final detector components. The first day saw the very delicate operation of installing the FASER tracker. The tracker consists of three tracking stations attached to the ends and in the middle of a 2.5m long aluminium beam which sits over two of the FASER magnets. Due to the tight space constraint between the FASER detector and the TI12 tunnel wall, and the small clearance between the magnets, the installation of the tracker was a nerve-racking process, but it went very smoothly thanks to the careful work of the CERN transport team (EN-HE). Once the tracker was installed, the FASER team were able to build the detector frame around this, install the on-detector electronics, and cable the detector. The team were eager to switch on the tracker as soon as possible in order to check that nothing had been damaged during the installation process. However, for this the on-detector cooling piping had to be installed and the cooling tested by EN-CV. Eventually, one and half weeks after the tracker was installed, FASER experts were able to turn on the detector and verify that it was working as expected. After this, the remaining detector components, the scintillators and calorimeter, were installed. This was followed by an intense period of detector commissioning during which all detectors were tested to ensure they were working well and fully integrated into the final trigger and DAQ system (see Figure 2). 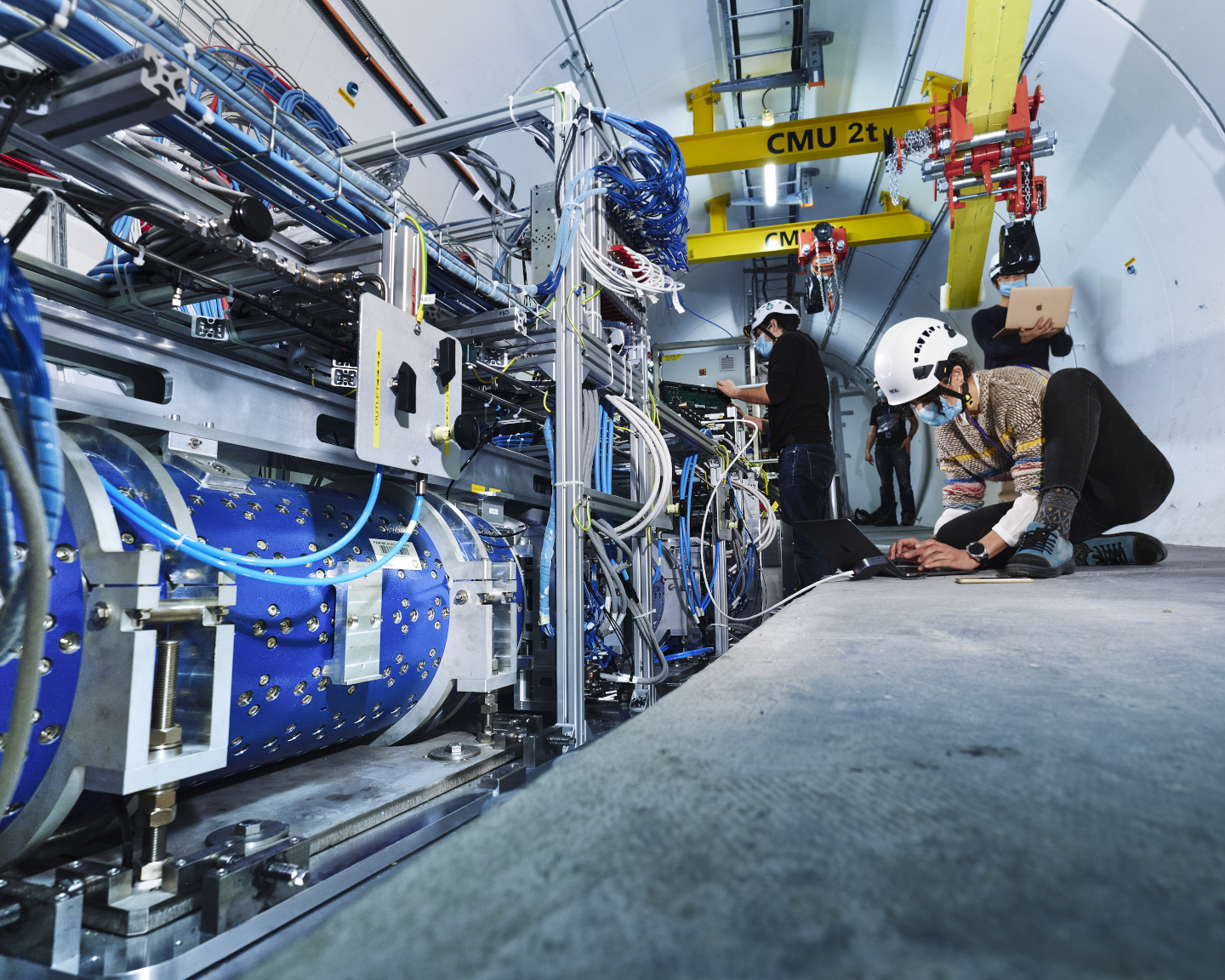 Fig.2: Commissioning of the FASER detector in TI12 during the March 2021 access window.

During the last week of the access, a safety inspection was carried out. Figure 3 shows the fully installed detector in the TI12 tunnel. 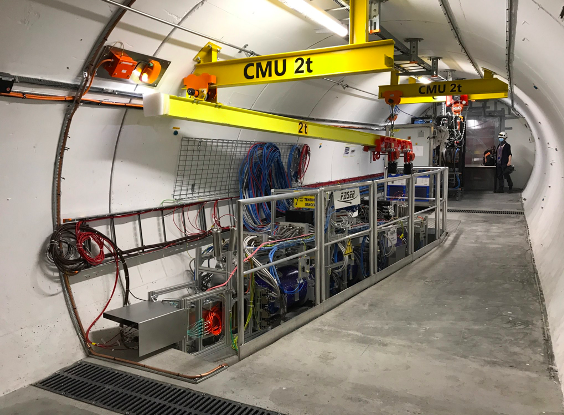 Fig.3: The TI12 tunnel at the end of the March 2021 access after the detector was fully installed.

The FASER collaboration has detected the first candidate particle interactions for neutrinos produced in LHC collisions. The result, described in a paper posted online, paves the way for studies of high-energy neutrinos at current and future colliders.

After analysing the pilot detector data and estimating a background of particle events that could mimic the signal from neutrino interactions, the FASER team found several candidate events for collider neutrinos. The result has a statistical significance of 2.7 standard deviations, a little below the 3 standard deviations required to claim evidence of a particle or process in particle physics. “The goal of the pilot detector was to demonstrate the feasibility of neutrino measurements in the experimental environment of the LHC,” says FASER co-spokesperson Jamie Boyd. “So we are very excited that this small detector, which is only about 1% of the final detector, allowed us to see the first candidate events for neutrino interactions at a collider.”

The team expects to observe about 20 000 collider neutrino interactions with the full-fledged FASERν detector in the next LHC run, from 2022 to 2024. 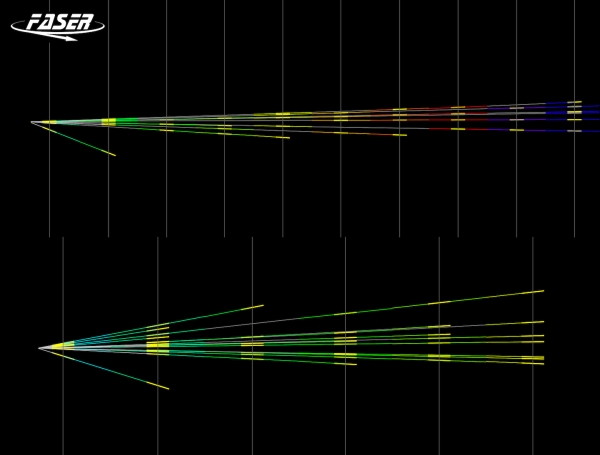 Image: Two candidate events for neutrinos produced in LHC collisions and interacting in the FASERν pilot detector. The neutrinos enter the detector from the left, and interact with the detector material to produce a number of charged particles. The different lines in each event show tracks from these charged particles, originating from the neutrino interaction point. (Image: FASER/CERN)