At its last meeting CERN’s Research Board approved a new experiment that will look for light and weakly interacting long-lived particles at the LHC. The ForwArd Search ExpeRiment (FASER) will search for particles that might be produced parallel to the LHC’s beam line and may travel hundreds of metres without interacting before transforming into known and detectable particles, such as electrons and positrons.

It will be installed in a side tunnel along an unused transfer line which links the LHC to its injector, the Super Proton Synchrotron, about 480 metres downstream from the ATLAS interaction point. FASER will collect data while ATLAS is operating. 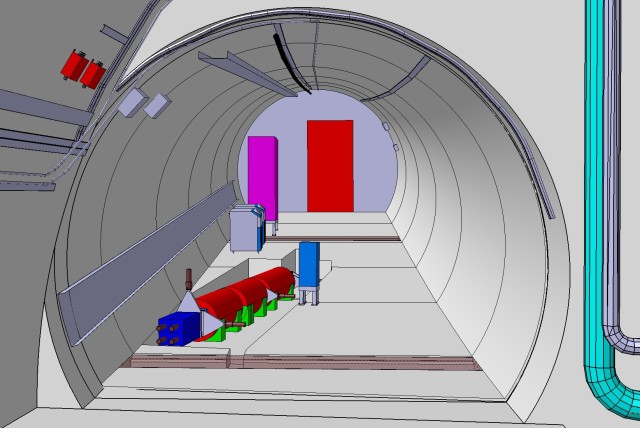 A 3D picture of the planned FASER detector as seen in the TI12 tunnel. The detector is precisely aligned with the collision axis in ATLAS, 480 m away from the collision point. (Image: FASER/CERN)

Initiated by physicists at the University of California, Irvine, the five-year FASER project is funded by grants of $1 million each from the Heising-Simons Foundation and the Simons Foundation – with additional support from CERN. FASER will use spare detector parts from the ATLAS and LHCb experiments that will allow a fast and relatively inexpensive construction. “One of the advantages of our design is that we’ve been able to borrow many of the components of FASER – silicon detectors, calorimeters and electronics – from the ATLAS and LHCb collaborations,” said Jamie Boyd, CERN research scientist and co-spokesperson for the project.

The search for new physics at the LHC has primarily focused on high-pT physics at the ATLAS and CMS experiments. This is not surprising, since new particles have traditionally been expected to be heavy. There are also experiments exploring the very forward region, including ATLAS/ALFA/AFP/ZDC, CMS/CASTOR/HFCAL, LHCf and TOTEM but their physics programs are typically thought of as complementary to those of ATLAS and CMS, focusing on standard model topics and providing precise measurements of the LHC luminosity. However, with the absence of signatures of new physics it may well be that new particles are light and weakly coupled. FASER will allow to cover some of this region and perform a systematic search for these particles.

These particles can be highly collimated. This implies that even about 100 meters downstream from the interaction point such particles have only spread out ∼ 10 cm in the transverse plane. Therefore, a small, inexpensive detector placed in the very forward region will be capable of sensitive searches. One of the primary experimental targets will be the so-called “dark photons” with masses in the MeV to GeV range, particles associated with dark matter, neutralinos and others.

The team considered dark photons produced by meson decays or proton bremsstrahlung, where the rates are well-understood. However, direct production of dark photons and other light states is expected to be one of the dominant production mechanisms.

FASER will also probe many other interesting physics topics. It will be able to detect a sizable number of neutrino events and measure the corresponding cross-sections at high energies, while in addition there is a vast array of other new physics scenarios that can be probed. “This novel experiment helps diversify the physics programme of colliders such as the LHC, and allows us to address unanswered questions in particle physics from a different perspective,” explains Mike Lamont, co-coordinator of the PBC study group.

The FASER collaboration counts as of today 16 institutes including research institutes from Europe, China, Japan and the United States. The experiment is planned to be installed during the ongoing Long Shutdown 2 and start taking data from LHC’s Run 3 between 2021 and 2023. FASER testifies to the versatility of approaches that the experimental community is implementing in the search for new physics that can explain some of the most fundamental questions in particle physics.

The lifetime frontier by David Curtin and Raman Sundrum.