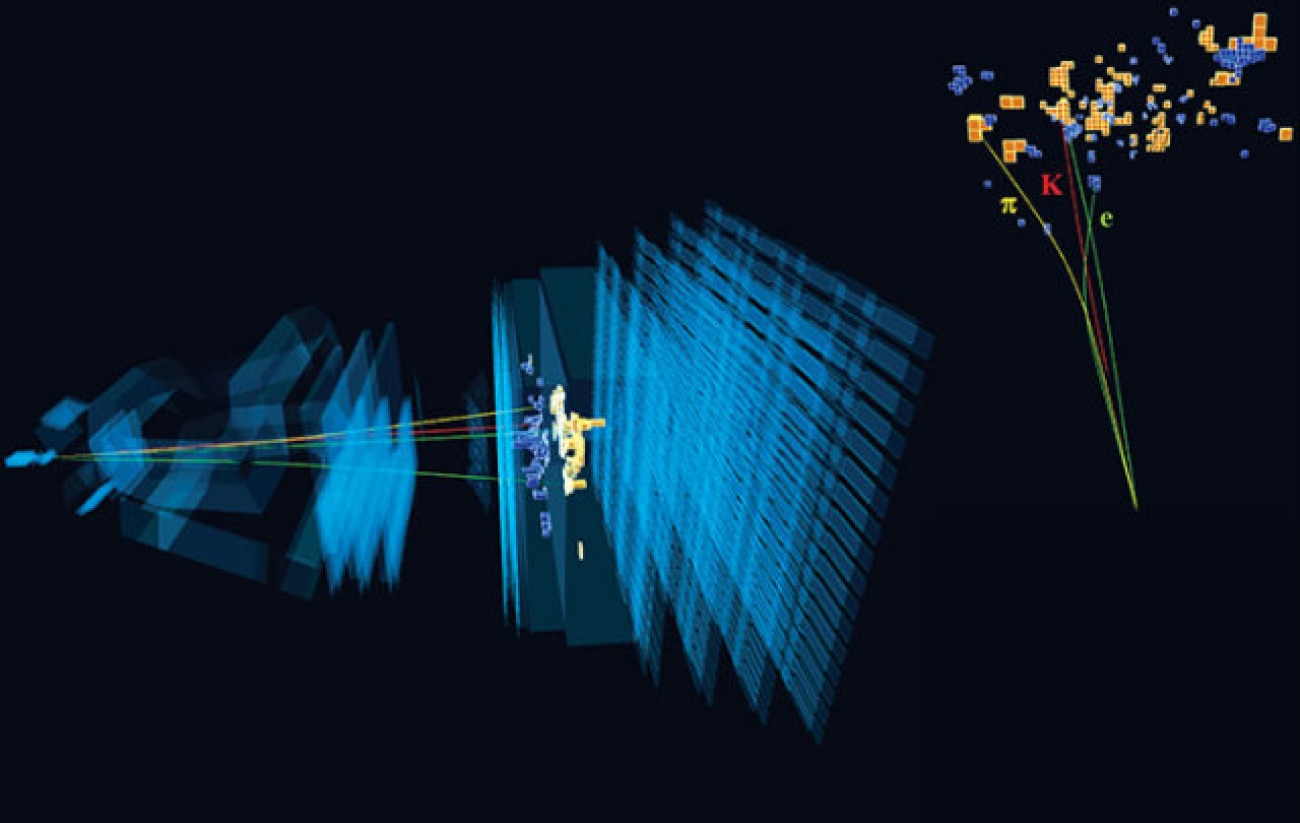 The Flavour Anomaly workshop took place in a successful hybrid format at the main Auditorium at CERN and the virtual world on 20th October. Pass sanitaire and workshop badge in hand, more than 80 participants could attend the event in person, while 500 more followed it by Zoom with lively interaction between the two. Those usually attending Flavour Physics conferences surely missed one of the leaders of the field during the last decades: Sheldon Stone, who passed away in October this year. Professor of Physics at Syracuse University, Sheldon had a central role in the success of the CLEO experiment and a vital impact in LHCb. The workshop was dedicated to his memory, which shall last and guide a generation of Flavour physicists.

So why so much interest in a single-day event? The main goal of the workshop was to discuss the experimental and theoretical status of the so-called Flavour Anomalies in b-hadron decays and the connection with the high-pT searches taking place at the LHC. The most striking of the anomalies concerns Lepton Flavour Universality (LFU), an accidental symmetry of the SM by which all the lepton species couple with the same strength to the electro-weak vector bosons. This property had been tested with high accuracy in the past in decays of light quarks and the electro-weak mediators themselves. But only recently could we obtain precise measurements in b-hadron decays, marking the start of this story.

Ahead of the conference, the tests of lepton universality carried out with b-hadron decays have attracted attention. One class of decays worth mentioning concerns quark transitions of the type b -> c l ν, which occur at tree-level via the charged weak current in the Standard Model. By measuring the branching fractions of transitions between beauty and charm hadrons for the heavy and light lepton species and considering their ratio, RD(*) = Br(B → D(*) τ ν̅)/Br(B → D(*) µ/e ν̅), one tests the universality between the tau and the lighter lepton species in these b -> c l nu quark-level transitions. As the charm meson can be produced in an excited state, two ratios have been measured: one for the transition to the ground state of the charm, "R(D)", and one for the first excited state, referred to as R(D*). These ratios are, luckily, very precisely predicted in the Standard Model. After the BaBar collaboration reported a combined deviation of 3.4 σ around 2013, the LHCb, Belle and Belle II collaborations have carried out measurements over the last decade, each taking a step forward in precision. While the experimental precision on both of the ratios has increased, the tension with the Standard Model remains 3.4 σ.

A different class of decays of heavy flavour also show signs of a breaking of lepton universality: decays involving the b → s l l transitions. These transitions are mediated in the Standard Model through flavour-changing neutral currents, which are heavily suppressed. Here, the tests of lepton universality focus on the two light lepton species: the muon and the electron. While there now is no neutrino in the final state, the bremsstrahlung of the electrons still make these analyses experimentally challenging. These quark-level transitions are relevant in, for example, the B → K l l decays, with which one can study the angular distribution of the leptons as well as the branching fractions. Early this year, the LHCb collaboration reported a deficit in the branching fractions of such decays involving muons with respect to electrons, contrarily to the universality expected in the Standard Model with a significance of 3.1σ. The angular distributions have only been analysed in the muonic decays, which so far also slightly prefer a deviation from the Standard model. However, there is a consensus that the Lepton Universality Violation (LUV)-tests are more robust with respect to theory uncertainties, and thus steal the show.

With these exciting sets of results, the theme of the workshop was set: could these results be signals of a common origin? And, what steps should we take to gain key insights in the possible NP scenarios, possibly using the large datasets collected by the ATLAS and CMS collaborations?

One of the most exciting features of the b → sll anomalies is the coherent pattern that they form when considered all together. This was nicely shown in a joint talk by representatives of various global-fit groups, a premiere in the field. The common basis of their work is the effective Hamiltonian of the b→sll transition, analogous to the Fermi effective theory of four-particle interactions. On top of this, they need to take into account hadronic effects, both from the hadronisation process and from long-distance physics. The latter constitute the main source of uncertainty on theory predictions and consequently the highest source of controversies between different groups. Experimental observables can be classified by their “cleanliness” according to the relevance of these hadronic contributions, such that Lepton Universality tests are completely free of them, fully leptonic branching ratios are very clean, while angular observables and branching ratios of semi-leptonic decays are severely affected. Although the various groups employ different statistical frameworks and sets of observables, the agreement of their results is astonishing when using clean observables only, as shown in the figure below. When all the observables are included, even though the treatment of the hadronic contributions is very different, there is still a good consensus that the data prefers new physics contributions to the vector (C9) or vector and axial-vector (C10) muonic couplings. 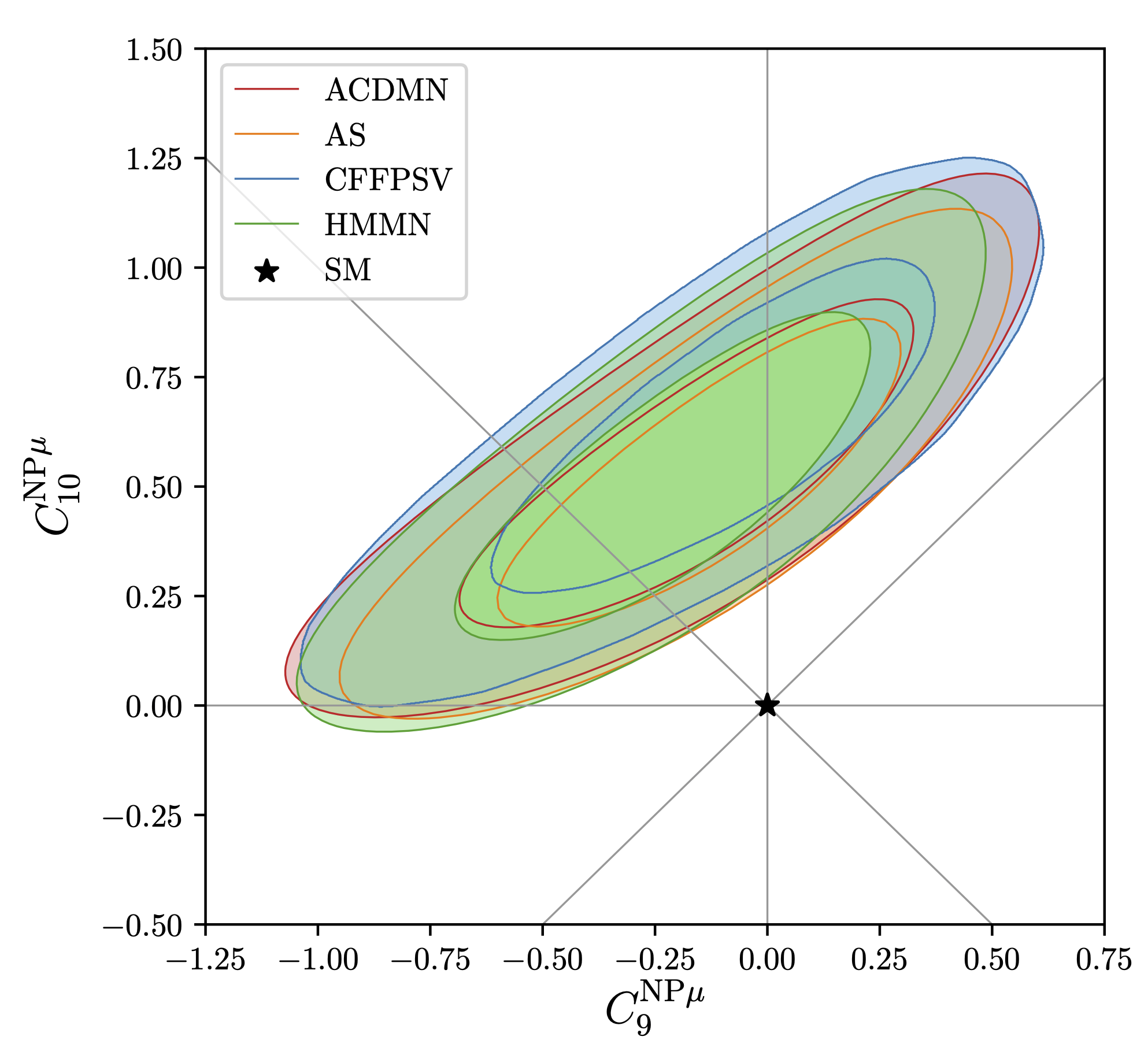 Global fit to the NP contribution to the vector (C9) and axial vector (C10) muonic couplings of the b->sll transition. Results from four theory groups are shown at the 1- and 2-sigma level, showing a clear agreement with each other and a significant deviation from the SM point (0, 0). Plot extracted from B. Capdevila's, M. Fedele's, S. Neshatpour's and P. Stangl's presentation.

Many NP models have been proposed based on this information, with NP scales ranging from a few to O(10) TeV, as summarized during the workshop. The simplest models contain a single new particle coupling to the b and s quarks and to muons, the most famous of which are a vector gauge singlet, aka Z’, and a leptoquark. The first is constrained from other observables, such as B0s meson mixing or neutrino trident production, and would be accessible at the LHC through direct production if it would also couple to the first generation. Leptoquarks are able to elude these constraints since they cannot create 4-quark/lepton interactions at tree level, and would be out of reach of LHC direct production if only the minimal couplings to explain the b->sll anomalies are included. A striking feature of most models is the prediction of sizable lepton flavour violation. Particularly stimulating are models that include a full UV completion or try to address the open questions in particle physics, such as the origin of the flavour and hierarchy problems. Another engaging option is representated by models that also address the tensions observed in b → cτν decays, such as R(D(*)). In this case, large couplings to the τ lepton and a lower NP scale of few TeV are required, allowing for a direct production at the LHC.

The latest developments in the theory of b → clν decays were also summarized, including a clear overview of the different techniques used to parametrize hadronic form factors, and the predictions for R(D) and R(D*) obtained with each of them. There is yet no final conclusion on these tensions and new experimental and Lattice QCD data are eagerly awaited. In the meantime, exploring other decays with different form factors, such as Λb → Λclν decays, will provide complementary information.

A common feature of the favourite new physics models is the prediction of Lepton Flavour violation (LFV). This can happen in the decays of either heavy flavor hadrons, the Higgs and electro-weak bosons or the new mediators themselves, and the LHC experiments provide a nice complementarity on all these modes as clearly shown during the workshop.

For low mass particles, LHCb dominates the scene, reaching the interesting region of 10-8-10-9 limits for LFV decays of b- and c-hadrons, while Belle still holds the best limit on τ → 3μ. For high mass, ATLAS and CMS play the main role, with limits on Higgs, Z and top LFV decays reaching the 10-3 and 10-7 regions, respectively. Several searches for BSM particles are also available from the three experiments, providing both model-specific and model-independent limits versus variables of interest such as mass, lifetime and coupling strength of the new particles. As the number of models keeps growing, a critical aspect of these searches is the publication of the phase space efficiency maps to enable recasting the interpretation of the results.

A comprehensive overview of the combined efforts of the ATLAS and CMS collaborations on the subject of new, heavy particles decaying to quark + lepton combinations was also presented, including searches for the aforementioned Z' models and (scalar or vector) leptoquarks. It was nicely explained that one can generally search for combinations of third-generation quark jets produced along with a lepton of the third generation, which can subsequently be interpreted as limits on, for example, the leptoquark. The two collaborations have already published constraints on the production cross-section of Z' models and leptoquarks for masses up to about 2 TeV, and plan to extend their searches to further final states. Interestingly, also a 2.4σ hint of a violation of electron-muon lepton universality was presented in an analysis of the forward-backward asymmetry at masses above 200 GeV by the CMS collaboration. This observable is also sensitive to vector Z' models, and nicely underlines the complementarity of the experiments. Despite being the last talk on the agenda, it led to a lively discussion about the global picture, i.e. combining the results of heavy flavour and the direct searches. It was mentioned that the HL-LHC is expected to be required to cover the region of interest in terms of cross-section and mass.

The LHCb collaboration also showed new results, including a test of lepton universality in B+ → K*+ l l and B0 → Ks l l decays. While these measurements carry a larger experimental uncertainty than the other heavy flavour observables so far, they also slightly prefer a deficit of muon decays over electrons.

It is clear that the observation of a violation of lepton universality would have exciting consequences, and we should learn from 3σ deviations reported in the past. Both the ATLAS and CMS collaborations presented their impressive preparations for Run 3 of the LHC, including the clever use of data parking and dedicated low-pT tracking, which will allow the experiments to also trigger on and reconstruct B-decays with electrons in their final state. This means that we are set for a beautiful set of measurements to arrive with Run 3!