Gearing up preparations for the T2K-II phase 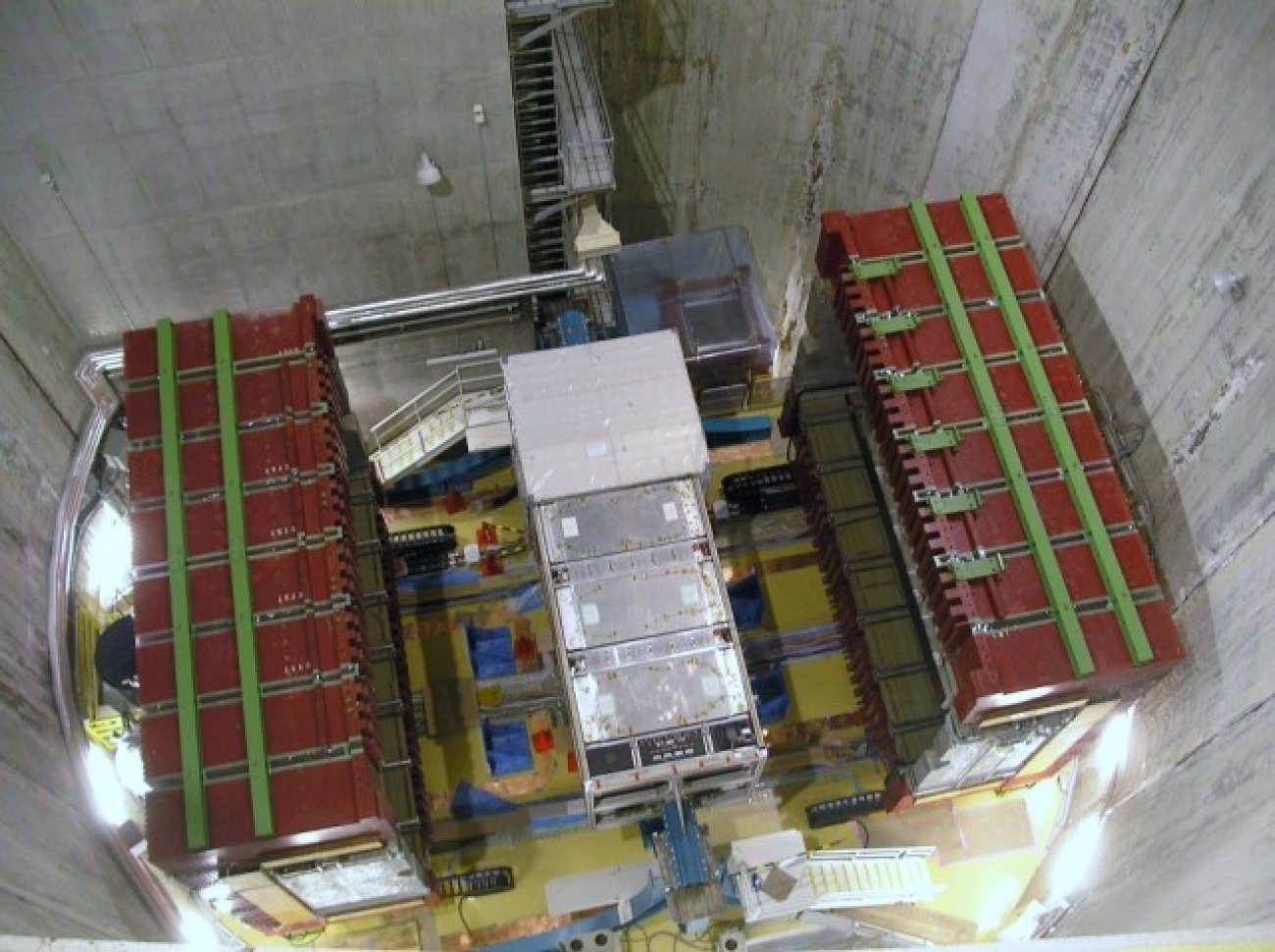 The upgrade of the near detector of the T2K experiment became in April 2019 an official CERN Neutrino Platform experiment (NP07). As a consequence an increased detector assembly activity has been started at CERN over the last months. This will continue until summer 2022 before the installation of the new detector starts at J-PARC (Tokai, Japan) in autumn.

The Tokai-to-Kamiokande (T2K) experiment is a long-baseline neutrino oscillation experiment located in Japan. A highly pure muon (anti)-neutrino beam peaking at about 0.6 GeV is produced at J-PARC (Tokai) at the east coast of Japan and directed towards Super-Kamiokande (SK) which is situated about 300 km away. This massive Water Cherenkov detector serves as the far detector of T2K to measure the oscillated neutrino beam. A near detector complex, located at J-PARC 280 m away  from the proton beam target where mesons are produced and subsequently decay to muons and (anti)-neutrinos, is used to characterise the neutrino flux and neutrino-nucleus cross-sections before the oscillations. The near detectors are crucial for long-baseline neutrino experiments since neutrino oscillations are measured by comparing the expected flux at the far detector, extrapolated from the flux measurement at the near detector, to the experimentally observed flux in the far detector.

For T2K, the near detector complex contains three main detectors: the INGRID detector is a scintillator-lead sampling detector placed on-axis with respect to the original proton beam direction and measures, day by day, the neutrino beam direction. Another detector, BWAGASCI/Baby-MIND is located at 1.5 degrees off-axis to study the beam profile and neutrino interactions. The third near detector, called ND280, is placed off-axis at an angle of 2.5 degrees, the same as SK, and consists of various sub-detectors which are placed in a magnetic field of 0.2 T. An alternating water-scintillator detector, the PiZero detector (P0D), is optimized to measure neutral current interactions. The P0D is followed by a tracker system based on two Fine Grain Detectors (FGDs) and 3 Time Projection Chambers (TPCs) with Micromegas readout. Each FGD has a mass of about 1 ton and act as targets for the neutrinos, while the TPCs allow to measure the charge and the momentum of the charged particles emitted in (anti-)neutrino interactions  and to perform particle identification based on the combined measurement of the momentum and of the ionization in the TPC gas. The P0D, FGD and TPCs are surrounded by ECAL modules. All these sub-detectors are placed in the magnet previously used in the UA1 and NOMAD experiments (see Fig. 3).  The magnet was donated by CERN to T2K, and constituted a key element in the physics performance of the experiment. The side muon range detector (SMRD) is integrated in the magnet yokes and measures the range of stopping muons.  A sketch of ND280 before and after the upgrade is shown in Fig. 1. The ND280 detector characterizes the beam composition before oscillation including the fraction of wrong sign neutrinos in the beam thanks to the magnetic field. Near detectors are absolutely crucial for long-baseline neutrino oscillation experiments to reduce the systematic uncertainties below the statistical uncertainty.

T2K started operation in 2010 and has since then been an impressive success story in terms of measuring the neutrino mixing angles θ13 and θ23, and recently also provided the first constraint on the CP violating phase with neutrinos. Back in 2011 T2K provided the first hints that theta_13 is different from zero. These hints were confirmed in 2013 with the first observation of oscillations in appearance mode (νμ to νe). T2K also delivers the world's best measurement of the θ23 angle by observing muon neutrino disappearance. Since 2014 T2K has alternated runs in neutrino and antineutrino mode, in order to study differences in the νe and anti-νe appearance probabilities that could be due to Charge-Parity (CP) violation in the leptonic sector. In 2020, T2K provided the first constraint on the CP violating phase in the leptonic sector in a paper published in Nature, selected as one of the top 10 scientific results in 2020 by the journal.

Currently, the T2K collaboration is preparing the T2K-II phase which aims to improve on the oscillation results. The T2K-II phase includes an upgrade of the neutrino beam increasing its power from ~500 kW to eventually 1.3 MW in 2026. In addition, ND280 is undergoing an upgrade which consists of replacing the P0D detector by a set of new sub-detectors. While the original ND280 is optimized for forward outgoing particles, the upgraded ND280 will have a high detection efficiency over the full solid angle (see Fig. 2), will have a better efficiency to reconstruct low momentum protons and will also be able to reconstruct neutrons thanks to the time of flight between the (anti-)neutrino vertex and the neutron re-interactions in the detector. In this way, the upgraded ND280 will not only provide a significantly larger data sample, but equally importantly,  the upgraded detector will help to reduce the systematic uncertainties from the current 6% to about 4%. 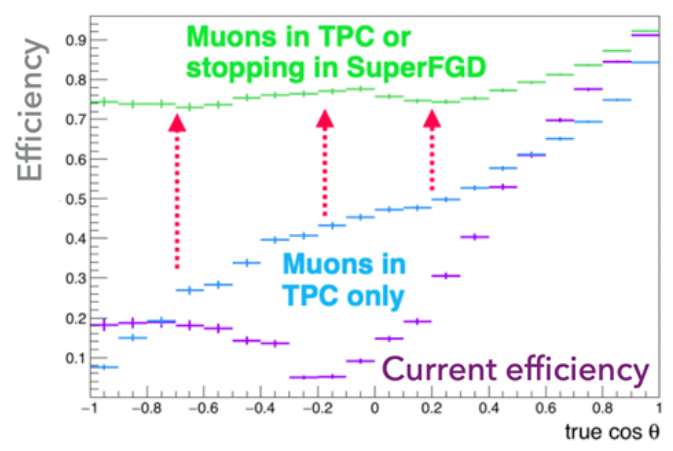 There will be three new sub-detectors: a novel scintillator tracker, the Super Fine Grain Detector (SuperFGD), which instead of XY layers of bars consists of 2 million scintillating cubes, 1x1x1 cm3 each. Wavelength shifting fibers are crossing all cubes along the 3 axis and read out single sided by a MPPC. The combination of the three different views allow a full 3D track reconstruction of the outgoing tracks. Since each plane is read in the two projective directions, short tracks can be reconstructed with a minimum of three planes, reducing the detection threshold for low energy particles. The overall dimensions of the SuperFGD are 182x192x56 cubes with a mass of about 2 tonnes. 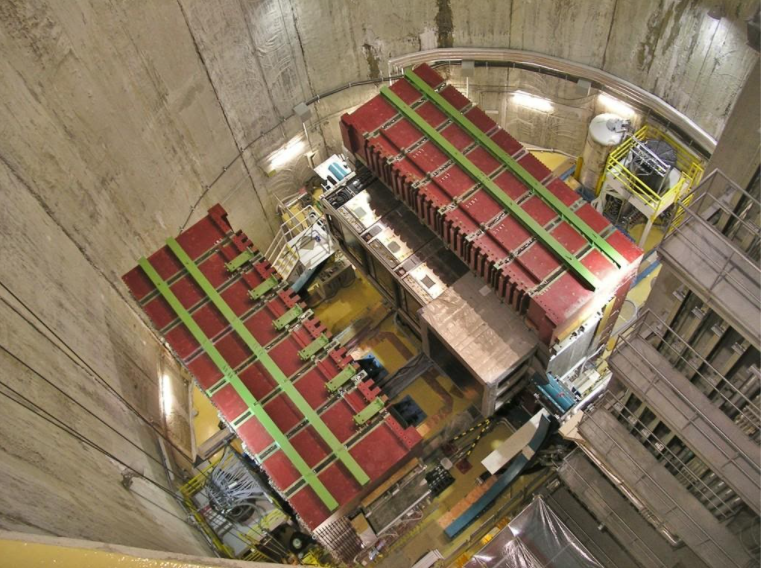 Fig. 3: The opened UA1 magnet with the current ND280 inside in the experimental pit at J-PARC

Two new TPCs are placed above and below the SuperFGD. These TPCs are read out with a novel micro-pattern-gas-detector technology, namely resistive MicroMegas (ERAM). Eight ERAM modules are mounted on each side of the TPCs. The overall size of one TPC is 2 X 0.8 x 1.8 m. The main advantage of the Resistive MicroMegas technology with respect to bulk MicroMegas is that it allows to significantly improve the reconstruction of the track position, thanks to the spread of the charge over several pads. With pads of ~1 cm2 the ERAM produced for the T2K TPCs allows the track position to be measured with a resolution of 200 μm for horizontal tracks and better than 600 mu_m for diagonal tracks.

In addition to SuperFGD and TPCs, a Time-of-Flight (TOF) detector will also be installed surrounding the new detectors. The TOF consists of 6 panels each made of 20 scintillator bars, 12 cm wide, 1 cm high and 210 cm long, read out on both sides by 12 MPPCs chained together. Time resolutions of 150 ps can be achieved with such a system. This system will discriminate particles produced inside of the detector from those produced in the magnet iron yokes.

EP Neutrino group is directly involved in T2K and the Upgrade project, and as NP07 project, the ND280 Upgrade, also profits from an excellent support from the CERN Neutrino Platform. The detector components are shipped from the more than 20 institutes worldwide collaborating in this project to CERN where they are assembled in dedicated areas in building 182 and EHN1. Fig. 4 shows the assembly work for the TOF detector in EHN1. 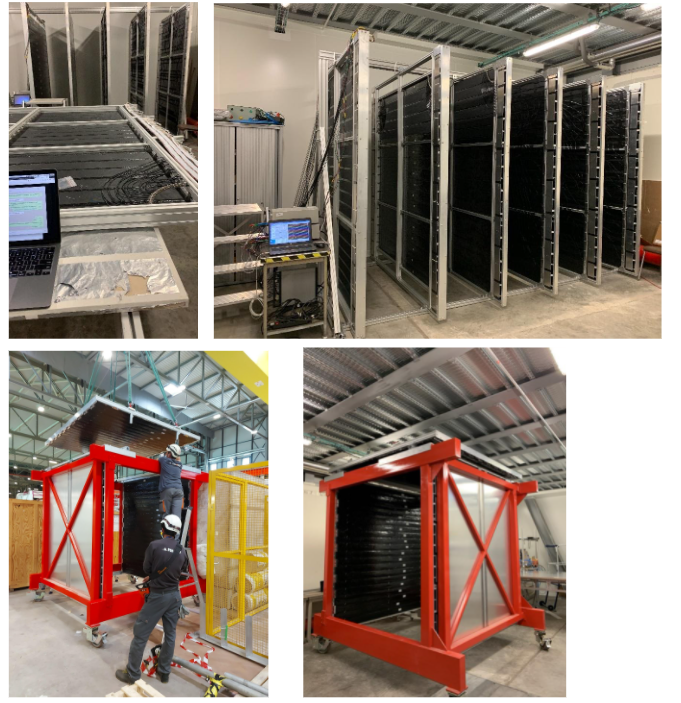 Fig. 4: (Top) Assembly and final TOF panels. (Bottom) Installation of the top panel of the TOF detector on the BabyBasket in EHN1 (Building 887) at CERN Prevessin.

A prototype of the SuperFGD consisting of about 10.000 cubes (Fig. 5), an ERAM module installed in the HARP field cage and some TOF bars were exposed to a particle beam at the test beam areas T9 and T10 of the PS accelerator in summer 2018 allowing to study the performance of the detectors and their response to different particle types. The results were published in various articles (NIMA Vol. 957, 21 March 2020, 163286; 2020 JINST 15 P1200; arXiv:2109.03078). Based on this success, the collaboration prepared a Technical Design Report in 2019 (arXiv:1901.03750). The production of the different detector components started in 2020 and the detector assembly is currently ongoing at CERN. 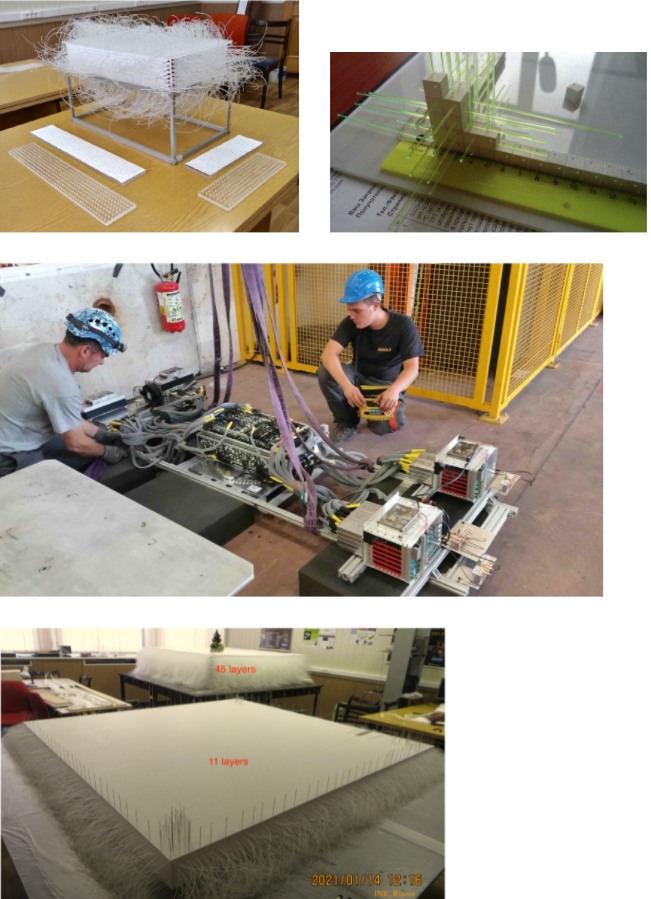 CERN contributes to a central part of the SuperFGD, the box which contains the 2 million cubes and has 120.000 holes for the WLS fibers, and also to various aspects related to the TPCs. The CERN MPGD group produces the required ERAM modules and the Gas System group from EP-DT led by Roberto Guida is developing a completely new TPC gas system for the Upgrade that will be used also for the existing TPCs of ND280.

The TOF detector panels have been fully assembled and are currently being tested at EHN1. To fully test the integration a full size mock-up of the structure in which the detectors will be installed at J-PARC has been built. The first of the TPC field cages will arrive soon at CERN and the full assembly and testing will take place in building 182 (Fig. 6) where the Neutrino Platform provides the needed infrastructure in form of clean room and assembly space. The fully assembled TPCs will also be tested there. The parts of the SuperFGD box will be delivered to CERN in spring 2022 and will undergo quality control before shipped to Japan for the final detector assembly. 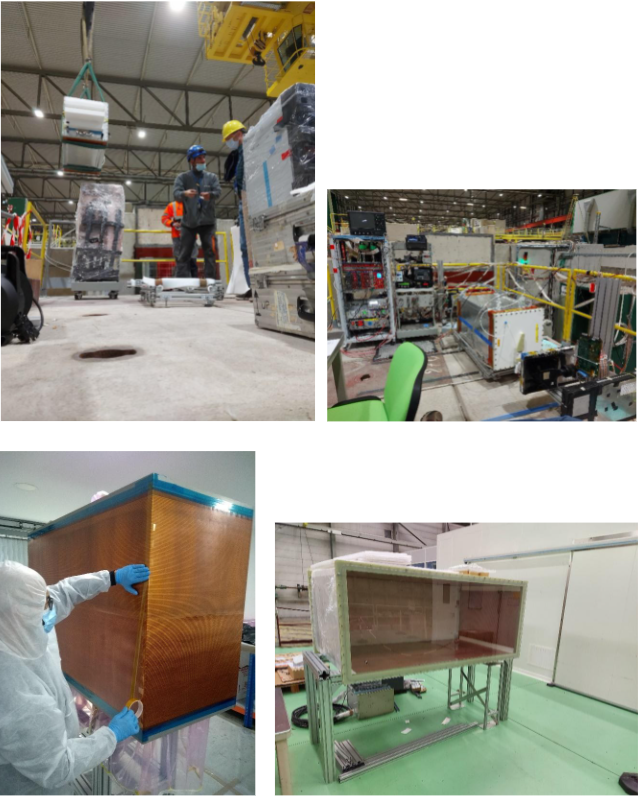 Fig. 6: (Top) Test beam at the SPS with the TPC prototype read out with one ERAM module. (Bottom) Production of the first TPC field cage at NEXUS Projects SL (Mataro, Spain) and a full size test chamber in building 182.

The time schedule for the upgrade foresees that the fully tested TOF and TPCs will be shipped to J-PARC before the autumn 2022. The installation of the sub-detectors is foreseen for the second half of 2022 and the data taking is supposed to be ready for data taking in the first quarter of 2023. The upgraded ND280 will also serve as a near detector of the next generation long-baseline neutrino oscillation experiment Hyper-Kamiokande.