A High-Granularity Timing Detector for the ATLAS Phase-II Upgrade 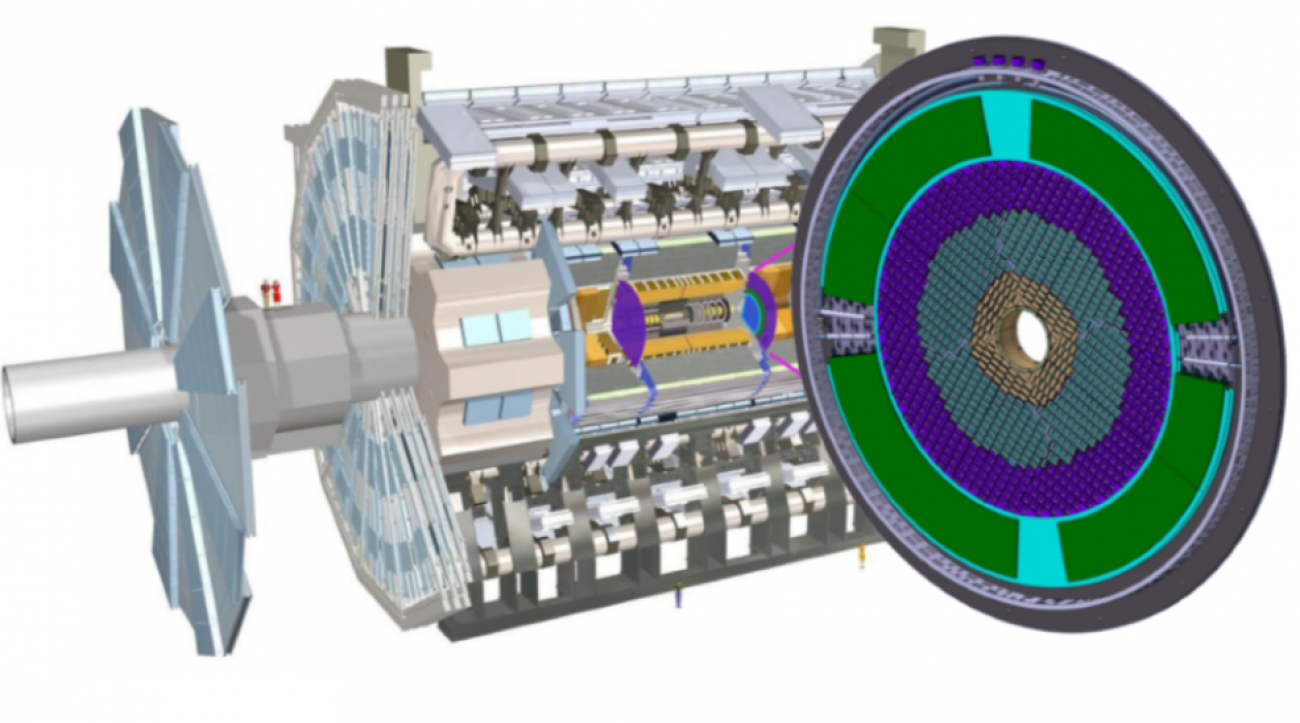 A High-Granularity Timing Detector (HGTD) using Low Gain Avalanche Diodes (LGAD) silicon sensors is being constructed for the ATLAS phase-II upgrade program as a powerful way to address the challenges of the High-Luminosity LHC program [1]. The goal of the new silicon-based timing detector is to provide timing information to tracks in the region of 2.4<|η|<4.0. The target time resolution is 30 ps/track at the beginning of Run-4 and 50 ps/track at the end-of-lifetime, after a planned integrated luminosity of 4000 fb-1.  This new ability to associate time to tracks will allow to disentangle tracks from different vertices in a single bunch crossing, improving the outcome of many physics analysis.

HGTD will measure the time of individual tracks with a precision that is 6 times better than the spread of the collision time, allowing the distinguish tracks in collisions occurring very close in space but well-separated in time. This new detector will significantly improve the track-to-vertex association in the forward region, compensating for the reduced longitudinal impact parameter resolution of tracks reconstructed by the ATLAS ITk tracker at large pseudorapidities.  HGTD will also provide bunch-by-bunch luminosity measurements at 40 MHz, using the total number of hits in the outer ring.  This new detector technology will be part of the upgraded ATLAS detector to ensure the optimal performance in the forward region at the HL-LHC.

The general detector layout and design of the HGTD is shown in Figure 1. The detector is composed of two instrumented double-sided layers with LGADs on both sides of the detector to ensure multiple hits per charged particle traversing through the detector. The front and back sides are rotated by 15 degrees in order to limit any dead area in the layout.  This allows for improved time resolution with multiple hits per track.  The peripheries of the double-sided layers contain electronics readout boards using many common electronics developments from CERN (DC/DC converters, lpGBTs, and VTRx+ optical converters).  The HGTD will be contained inside a hermetic vessel that will be mounted onto the Liquid Argon cryostat.

Figure 1. Expanded layout of the HGTD, including the instrumented double-sided layers as well as the internal and external moderators.  The vessel will be hermetically sealed and mounted onto the Liquid Argon cryostat.

One of the main challenges of the HGTD is the radiation hardness of LGADs. The forward region of ATLAS will be subject to a very harsh radiation environment, where sensors and front-end ASICs will receive a very high fluence and total ionizing dose. To ensure that the performance of the HGTD does not degrade beyond a track time resolution of 50 ps, the modules located in the innermost rings will be replaced during the detector lifetime. The resulting total ionizing dose will be 2 MGy and Si 1 MeV fluence of 2.5x1015 neq/cm2, including safety factors for both values.

Given the expected fluence, significant R&D is on-going within the HGTD community to study LGAD performance for these radiation levels.  Many vendors are being studied to validate the performance at the maximal fluence. To improve the performance, carbon enrichment is being used by several vendors to allow operation of the sensors at lower bias voltages for improved stability throughout the lifetime of the detector. Carbon enriched sensors from two vendors have been tested in the lab using beta sources as well as in HGTD test beams, showing stable performance at lower bias voltages when compared to non-carbon enriched sensors at similar fluence values. LGAD performance of several vendors, with and without carbon enrichment, is shown in Figure 2.Further information on LGAD studies for the HL-LHC can be found in Ref. [2].

Figure 2. Collected charge (left) and time resolution (right) of LGADs from various vendors being considered for HGTD at a fluence of 2.5x1015 neq/cm2. The target collected charge is 4 fC and time resolution of 50 ps for the HGTD.  Carbon enriched sensors (IHEP-IMEv2-W7Q2 and FBK-UFSD-2.3-W19) show stable performance at much lower bias voltages than non-carbon enriched sensors.

Another crucial milestone for LGAD sensors for HGTD is the study of full-sized devices.  HGTD modules will have a size of 2 x 4 cm2, including two LGADs bump-bonded to two front-end ASICs (ALTIROC) which are then glued to a module flex. Modules will be loaded onto detector units and placed onto the cooling plate. Full-sized LGADs will be comprised of 15x15 pixels each with a 1.3 x 1.3 mm2 pitch.  Testing of full-sized LGADs is a vital step in ensuring a high yield from vendors for final production. Figure 3 shows the performance of a recent IHEP-IMEv2 production run in 2021, showing excellent uniformity across the entire full-sized sensor.

The HGTD first full-size readout ASIC prototype (ALTIROC2) has just recently been produced.The ASIC is manufactured using 130 nm CMOS technology from TSMC, containing 225 channels with a preamplifier, followed by a discriminator and Time-to-Digital Converters (TDC) for the digitization of Time-of-Arrival (TOA) and Time-Over-Threshold (TOT) measurements.  The first full-sized modules using this ASIC are currently being assembled and tested. The coming year will be important for the validation of the full HGTD detector chain, from the full-sized modules to the peripheral electronics, readout and mechanics. This will be achieved in large part during a demonstrator program on-going at CERN.

Along with LGAD and ALTIROC testing, the first demonstrator prototype is being studied to test the thermal performance of the detector using CO2 evaporative cooling. The CO2 evaporative cooling is important for ATLAS, in particular the high-power density detectors of the HL-LHC, including HGTD. The module power dissipation is expected to be 400 mW/cm2, with 300 mW/cm2 from the ALTIROC ASIC. It is necessary for the ASIC and sensor to have good thermal contact with the cooling plate to maintain an operating temperature of -30 oC. It is also important to validate this performance to avoid any thermal runaway of the LGADs if the temperature reaches too high values during their operation.

The first thermal demonstrator has been assembled at CERN and tests are on-going using silicon heaters manufactured at CNM to validate the operational temperature on the modules using CO2 evaporative cooling. These tests also include the validation of the finite element analysis of the thermal performance of the detector. The largest readout row of 19 modules has been assembled for this study.  A photograph of the thermal demonstrator is shown in Figure 4.

In summary, since the submission of the TDR in April 2020, the HGTD has made excellent progress to address some of the most difficult challenges towards the construction of the detector. Even given the complications of COVID-19 around the world, HGTD remains on track to be ready for installation by the beginning of the HL-LHC, with the pre-production of some detector components starting within one year.