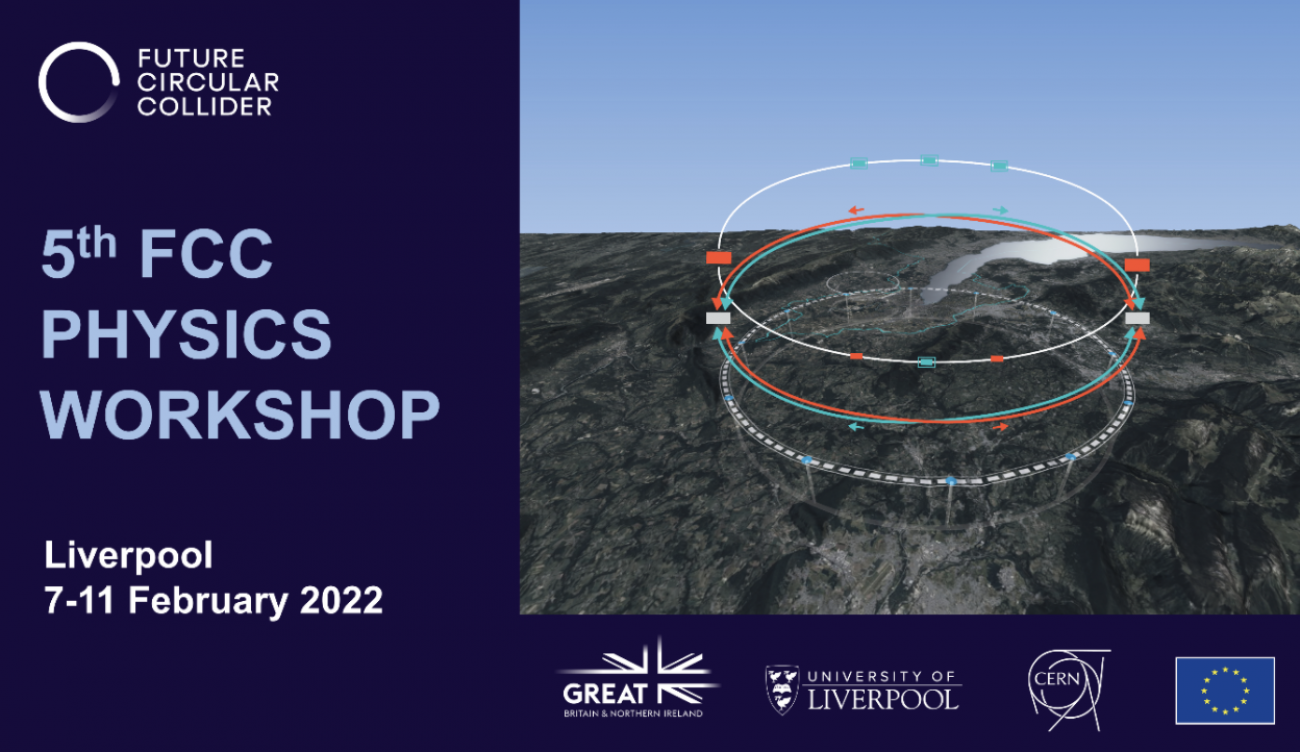 For the first time since the launch of the FCC feasibility study, the FCC physics community gathered to reflect the status and achievements of FCC Physics, Experiments, and Detectors studies and initiate new activities.

The fifth FCC Physics Workshop, organised by CERN and the University of Liverpool, took place as a hybrid event, bringing together over 600 participants and made it the largest FCC Physics Workshop to date, welcoming the widest community, geographically, thematically (colliders and beyond), and members of other ‘Higgs factory’ and future projects.

The meeting offered an opportunity to sharpen the Future Circular Collider (FCC)'s physics case. A future e+e- circular collider (FCC-ee) will deliver mind-boggling integrated luminosities to study all standard model particles and their interactions with the Higgs boson – with unprecedented precision. In his opening talk, Joachim Mnich, CERN’s Director for Scientific Research and Computing, stressed the need balancing the community’s engagement to the success of the LHC programme and commitment to preparing a visionary project like the FCC. Michael Benedikt, FCC’s study leader, presented the key activities of the FCC feasibility study, including the development of a regional implementation scenario in collaboration with CERN’s Host States. Over the past months, a new baseline scenario for a 91km  ring layout has been established, balancing the machine performance optimization, the physics output and the territorial constraints.

The workshop was also an opportunity for sharpening the physics case for the FCCs. Christophe Grojean (DESY) noted that “data always brings more understanding and FCCs could largely contribute in giving us more data and facts to navigate in today’s landscape”. A circular Higgs factory like the proposed FCC-ee has a rich potential as its unprecedented luminosity will provide both direct and indirect sensitivity to New Physics. A number of talks covered detector and software requirements to collect and analyze the large data samples at the FCC-ee. Karl Jacobs (Uni of Freiburg & ECFA Chair) offered a detailed summary of FCC-related in the framework of the ECFA roadmap on future detector technologies. Furthemore, presentations highlighted the links between FCC’s research programme and some of the bigger questions lying in the intersection of particle physics, cosmology and astrophysics. Scrutinizing the Higgs boson as well as a number of electroweak observables would refine our present understanding of nature and could provide the first signs about the form/scale of new physics.

The high statistics at FCC-ee are offering opportunities for new physics discoveries, from very weakly-coupled light particles that could explain the yet unobserved dark matter to quantum effects of high-mass scale new physics. In addition, speakers referred to the physics studies opened by the direct kinematic reach of an energy-frontier proton collider (FCC-hh) hosted in the same tunnel and profiting from the existing infrastructure. Key in the cost and reach of a future energy-frontier collider is the magnet technology. Soren Prestemon from Lawrence Berkeley National Laboratory discussed the ongoing R&D efforts for accelerator magnet technology and highlighted the need for collaboration: "We are at a critical period, where innovation and progress in magnet technology is essential to enable the next generation of collider but the of activitiesre is a strong interest in collaborating internationally, where strengths and capabilities are deemed complementary or can accelerate R&D". The coordination among shareholders shows that community welcomes the challenge to reach the energy-frontier while recognizing the responsibility. The staged approach of FCC-ee followed by FCC-hh provides the most efficient and pragmatic way towards the energy frontier while the scientific synergies between FCC-ee and FCC-hh give access to a diverse scientific programme that would contribute to answering some of the biggest questions in modern physics.

In addition to discussions of the physics case of FCCs, the meeting was ideally suited to reflect on detector requirements and progress on the design of new physics analysis tools and methods. Concrete detector concepts for FCC-ee were discussed, based on the efforts to establish the detector requirements from physics studies to fully benefit from statistics, variety of channels, and new physics sensitivity. The goal, as part of the feasibility study, is to provide a coherent set of solutions that would allow exploiting the physics opportunities of the new collider and deliver preliminary infrastructure requirements and cost estimates. Finally, a key aspect is the development of the required software framework that is needed to advance with simulation and event reconstruction.

A post-LHC infrastructure requires a dedicated physics community with the common goal to carry out a long-term scientific research programme and fully exploit the research opportunities offered by these scientific tools. The meeting also allowed establishing constructive collaboration with linear collider teams and aligning the R&D plans with other roadmaps and activities at European and global level. In that direction, discussions during the meeting will inform the preparation of an FCC paper that will be submitted in the Snowmass process in the US.

The distribution of the more than 600 participants, testifies to the global attractiveness of the project while it gave many newcomers insight into the different Physics Experiments and Detector (PED) activities of the FCC feasibility study. 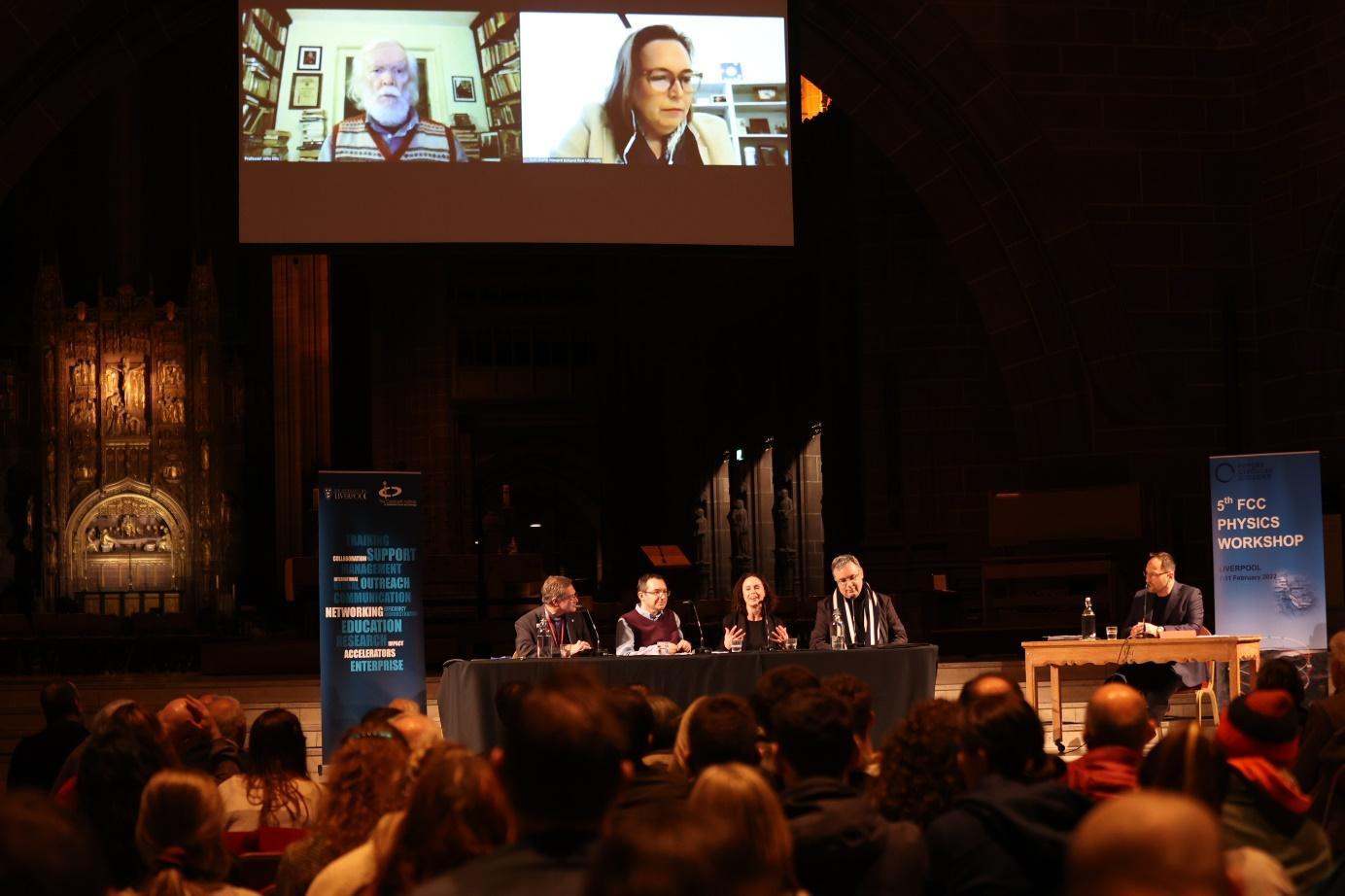 Discussion on ‘Science and Faith’ at the Liverpool Cathedral. (Image credit: University of Liverpool).

As international scientists converged online to discuss the Future Circular Collider, the University of Liverpool Physics Department hosted an in person outreach event '21st Century Particle Physics: Discussions on Science and Faith’ on the 8th of  February 2022. The event took place at the famous Liverpool Cathedral, the eighth largest church in the world. Particle physicists and theologians gathered to explore how a journey into the unknown takes a combination of faith, philosophy and science.

Professor Carsten P Welsch, Head of the Physics Department at the University of Liverpool, who organized the evening with Dr Tessa Charles, Matthew Mccullough and his Project T.E.A.M. explains that the FCC will push the frontiers of knowledge still further.

“Science knows no boundaries, as we have seen with the international effort to tackle the pandemic. Having an exciting goal creates ambition and vision. The Future Circular Collider provides such a focus. The world today has been transformed by the computer technologies that have spun-out from work on particle science but now, maybe more than ever, there is a role for science, philosophy and faith in shaping a future that we all want.”