Hunting for charm with lead and SHINE 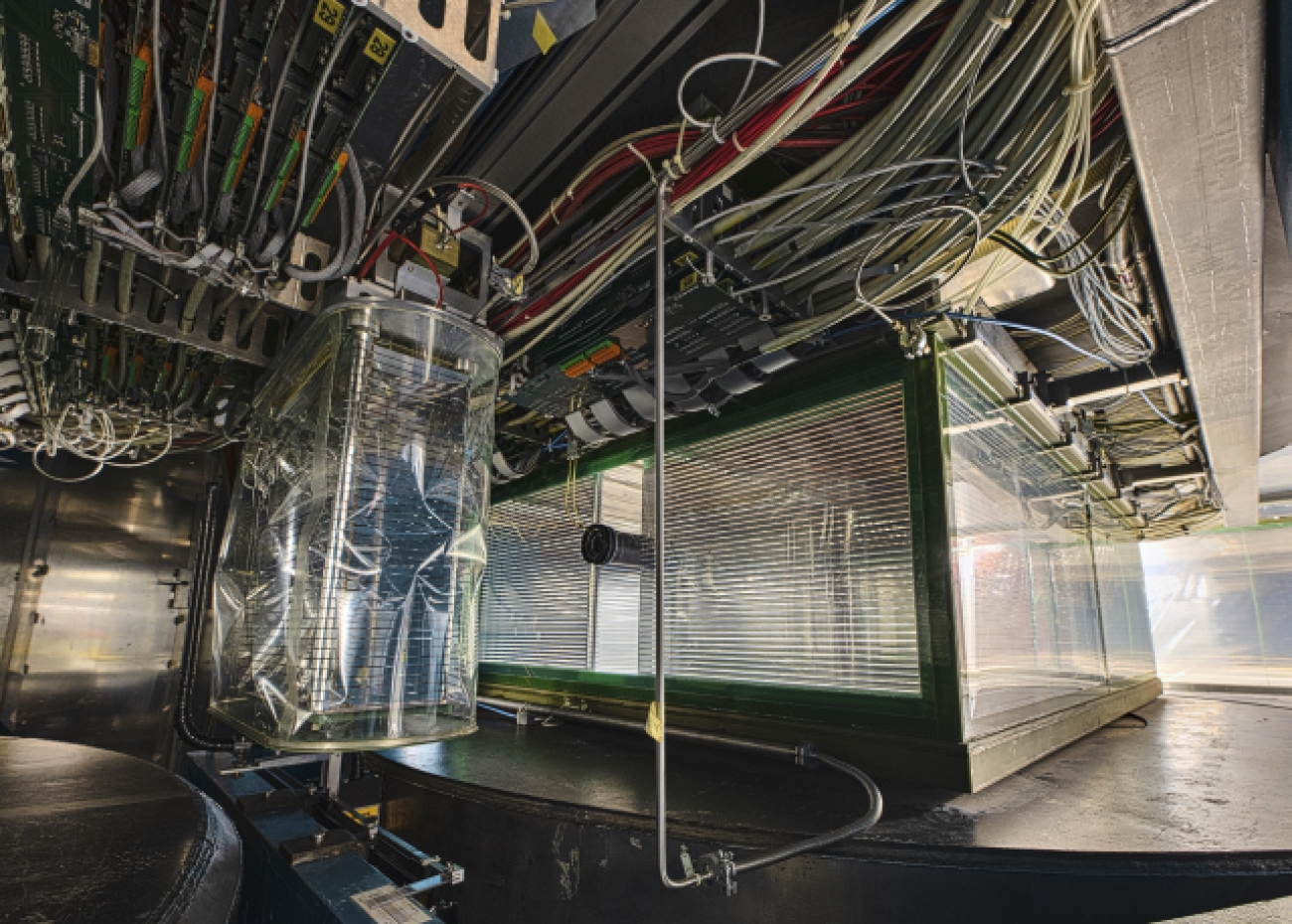 SHINE (SPS Heavy Ion and Neutrino Experiment) [1] is a multi-purpose experiment studying hadron production in hadron-proton, hadron-nucleus and nucleus-nucleus collisions. The programme on strong interactions includes studying the properties of the onset of deconfinement [2] and searching for the critical point of strongly interacting matter [3]. Additionally, two large projects of reference measurements are ongoing on requests of neutrino and cosmic ray physics. SHINE is located in the North Area of the CERN Super Proton Synchrotron. It is, unlike LHC experiments, a fixed target experiment - particles accelerated by the SPS collide with a stationary target and products of such interactions are recorded by the detection system. In 2018, just before the Long Shutdown 2 (LS2) at CERN, SHINE completed data acquisition for its world-unique programme - the two-dimensional scan of the beam energy and the size of colliding nuclei. Exciting results from this scan were reported in the EP Newsletter.

Long Shutdowns at CERN are usually very busy periods, where a lot of upgrade and maintenance work is being done on the infrastructure, accelerators, and detectors. It was no different for SHINE. During LS2, the SHINE detection system was significantly upgraded. TPC readout electronics were replaced to achieve much faster data-taking speeds and, simultaneously reduce noise. Additionally, the new Vertex Detector (VD) was constructed, employing ALPIDE silicon sensors (the same technology as the new ALICE ITS) to precisely reconstruct decay vertices of short-lived particles produced in the collision. Figure 1 shows a photograph of the device and one of its performance plots. The detection system is completed with: an extended Projectile Spectator Detector (hadron calorimeter) modified to withstand high-intensity Pb beam, a newly constructed Time-of-Flight detector based on mRPC technology, and Beam Position Detectors based on Silicon Strip Detectors. On top of the upgraded detectors, a new Trigger and Data Acquisition system was built, including an online computing cluster with over 2000 CPU cores for online processing of the collected data. The upgraded detector is ready to provide high-quality physics data with hadron and heavy-ion beams recorded with up to 20 times higher rates than before the LS2. 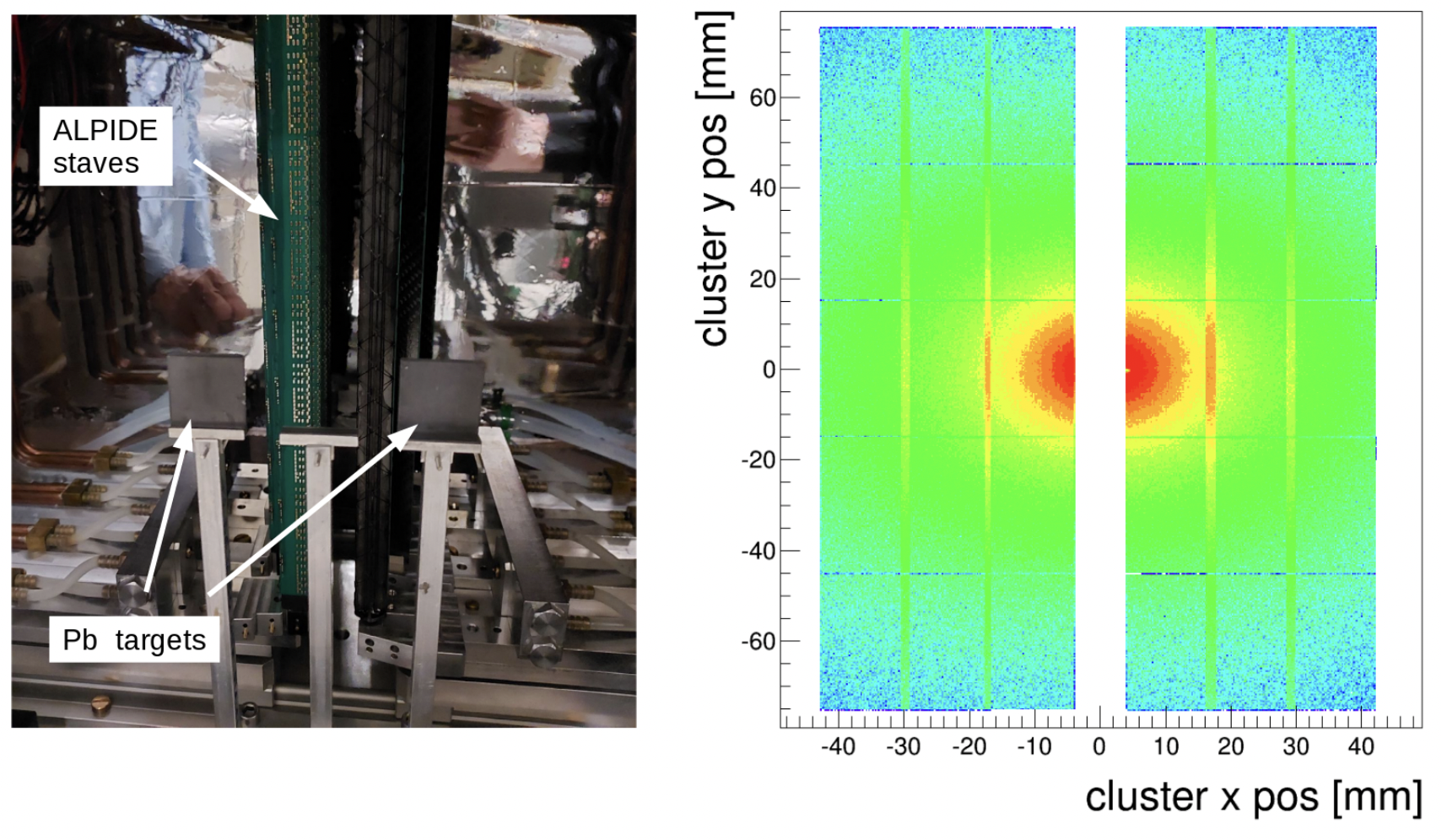 Figure 1: Left: Photograph of VD taken after installation of the device on the beamline. The staves hosting the ALPIDE sensor and Pb targets are indicated by arrows. Right: Multiplicity distribution of VD clusters detected in the most downstream VD station. The sensor structure is well visible. Four vertical lines showing higher count rates are due to the horizontal overlap of the sensors.

First Pb beam after LS2 was delivered to SHINE in November 2022, starting its pioneering measurements of charm hadrons in Pb+Pb collisions at SPS. Figure 2 shows an example of Pb+Pb collision captured by the SHINE spectrometer. The resulting unique data will allow pinning down properties of charm production and distinguishing between the plethora of models.

Figure 2: Pb+Pb collision recorded by the NA61/SHINE Time Projection Chambers. Each blue line represents a trajectory of a charged particle produced in the interaction. 3D visualisations of SHINE events are available online.

The SHINE results should also set the stage for future measurements of the system size and collision-energy dependence of charm production at the CERN SPS. The charm-anticharm pairs produced in the collisions are converted into open charm mesons and charmonia - J/ψ meson and its excited states. Charmonia and charm mesons are particularly interesting in studying the phase transition between confined hadronic matter and the quark-gluon plasma. Suppression of the relative yield of charmonia is considered one of the key probes of deconfinement [4, 5]. Charmonia were precisely measured at SPS by the NA50 and NA60 experiments [6, 7]. The measurement of open charm awaits SHINE.

This year’s data-taking on Pb+Pb collisions is the first step in collecting about 500 million events during the Run 3 period. This unique dataset will give us an insight into the mysteries of heavy flavour production mechanisms in heavy-ion collisions. SHINE would like to thank colleagues from the CERN EP, BE HSE and EN Deperatments for the strong support of its measurements.