An intense commissioning year at LHCb 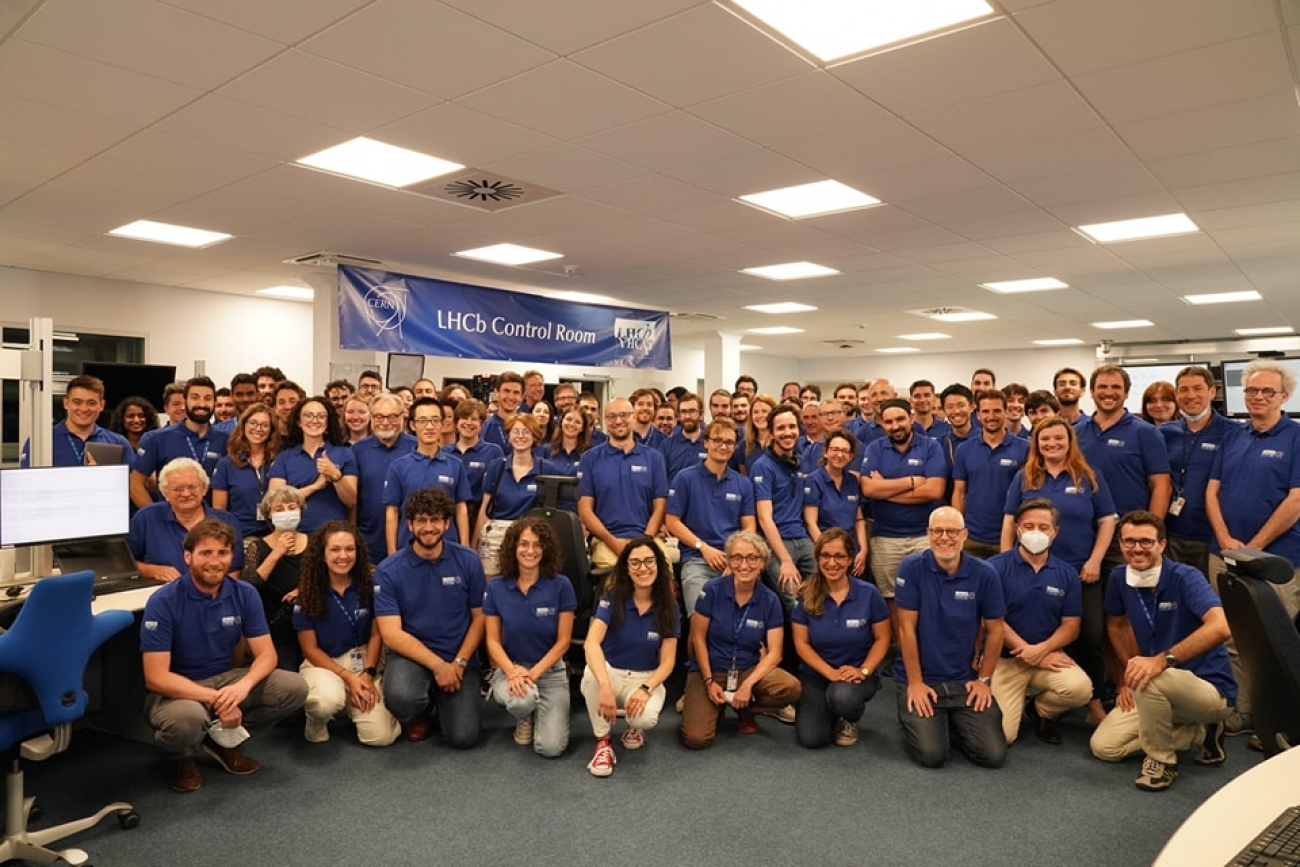 The restart of data taking in 2022 after the completion of the installation during the Long Shutdown 2 at LHCb marked the first commissioning phase of its new upgraded detector. An impressive amount of work has been achieved throughout the year in the commissioning of the detector, the readout system and the trigger, and it is briefly summarized here.

In fact, the LHCb upgraded detector was conceived to operate at five times the instantaneous luminosity with respect to that in the previous decade of data taking [1], requiring the replacement of 80% of the sensitive detector channels as well as the entirety of the readout electronics. Moreover, to increase the flexibility and efficiency in the selection of events with hadronic final states, a brand new fully software-based trigger running on GPUs was designed. The trigger aims to run its selection algorithms on all collision events with the full detector information available. To achieve this ambitious plan a completely new readout system was needed: 100% of the detector electronics channels have been replaced, and a new data center [2] has been built, able to host ~170 servers each equipped with three readout cards and one GPU card. Such a readout system is able to process the unprecedented data flow of 4 TB/s, filtering it down to 10 GB/s thanks to the most flexible trigger ever conceived.

Given its central role, the readout system and its control system were among the first items to complete commissioning and were ready for beams on day 1. All readout parts were installed and validated in the brand new LHCb data center, and roughly 15000 fibers were cleaned and plugged into the readout electronics. At the same time as the hardware installation, the software experiment control system was finalized: in LHCb, the control system is characterized by a high-level of automation and flexibility: thanks to this, the LHCb experiment is run by only two people on shift. An illustration of the main panels of the control system as operated by the shifters in the control room can be found in Figure 1.

Figure 1. Screenshots of the LHCb main Run Control (left) and the so-called Big Brother panel (right). These two panels are the point of entry for controlling, monitoring and configuring any devices of the LHCb experiment.

Profiting from the readiness of the online system, all installed sub-detectors proceeded to work on the different stages of commissioning: validate the hardware by performing powering tests, develop the safety system that would switch the equipment off in case of risk, interface the electronics and detector elements to the control system, perform connectivity tests to check the proper connections of fibers and cables to the readout electronics, test the electronics by taking data with detector noise and finally integrate the sub-systems into the global LHCb data taking tree. This preparatory work culminated with successfully taking data with the first collisions at 13.6 TeV on the 5th of July 2022. Colleagues worked long hours in the LHCb control room during the day into the nights to reach this goal. A picture of a subset of LHCb Collaborators participating in the commissioning can be seen at the top of this article, but we shall not forget the invaluable contribution from colleagues connected remotely.

After the excitement and hard preparation towards the first ever collisions at 13.6 TeV with the upgraded detector, the months between July and November were filled with work without stop, profiting from the continuous delivery of collisions from the LHC.

Among the main highlights of the year, the Vertex Locator (VELO) closure was surely one of the most important achieved milestones. The VELO [3] is one of the many movable devices around the LHC and in LHCb it is dedicated to tracking very near to the Interaction Point. The VELO was able to take data and reconstruct tracks. Thanks to this, it moved up to a distance of a few mm from the beam line, measured to be at an aperture of 2.9mm. Figure 2 shows an example of the busy environment in which the VELO sits and the measured beamspot position.

Figure 2. (left) Tracks as seen by the VELO in the very near interaction region. (right) Beamspot scan from multiple interactions in the VELO region, showing the aperture of the VELO detector.

The Ring Imaging Cherenkov detectors (RICH) [4] also achieved the goal of taking data and reconstructing first measured rings, which is the typical event signature in such a detector. Quite importantly, the detector obtained an already good Cherenkov angle resolution, which is critical in distinguishing particles in LHCb. This is shown in Figure 3 for RICH1, although similar performance was obtained for RICH2 as well.

Lastly, another major achievement was the running of the software trigger which selected events based on full information provided by the commissioned detector, from data collected in the very last days of November 2022. Obtaining mass plots, even if preliminary and based on very little data recorded in the very last days of the year, is one of the critical goals for a particle physics experiment, to demonstrate that the detectors work. A few obtained mass plots can be seen in Figure 4 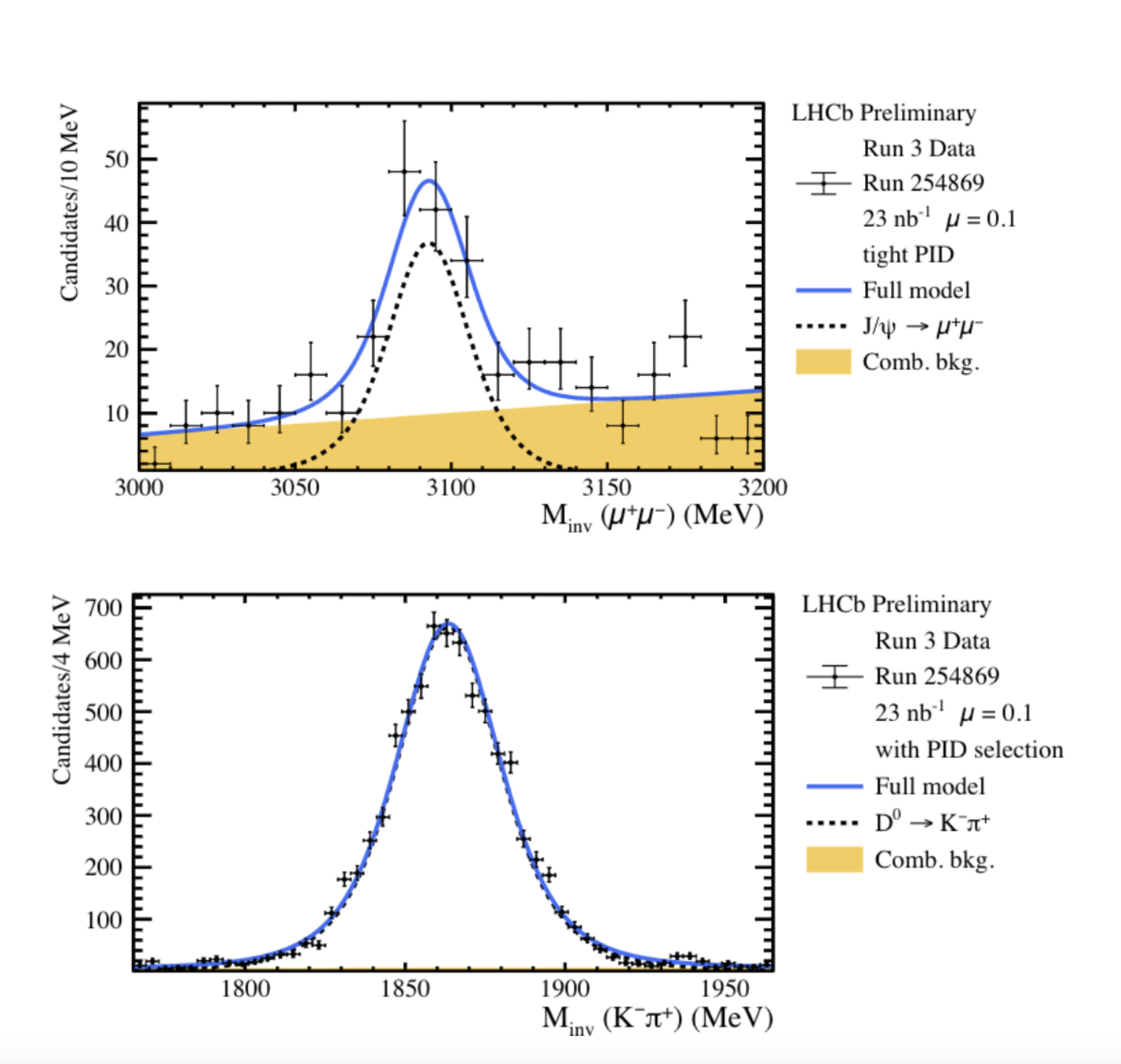 Many more milestones have been achieved throughout the year that cannot be shown here: namely the luminosity calibration, SMOG [6] injections, the participation in the test ion run as well as countless sub-detector specific activities, aimed at improving the operation of the LHCb experiment.

In conclusion, the year 2022 was an intense and successful commissioning year of the newly upgraded LHCb experiment. Efforts were spent proving the operability of the full detector chain, from the on-detector electronics to the readout system to the trigger. The work for 2023 will now concentrate on improving the performance and understanding of the detector in order to efficiently record high quality collision events for the remainder of the LHC Run 3 at the LHCb experiment.