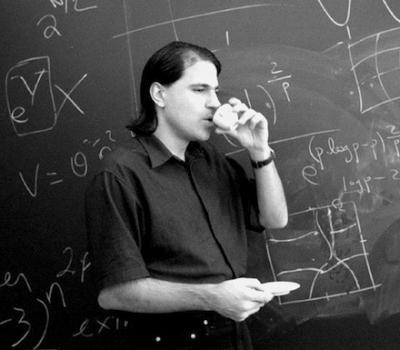 P.C. What were your biggest influences in deciding to do physics?

Α.Η. As I grew up in a family of physicists, I have been fascinated by science, and especially the connection between mathematics and physics, since my childhood. For instance, I recall coming to the striking realization that Newton’s equations could be used by anyone to predict and understand how nature works.

As a teenager, I had a weird obsession with problems of classical physics. When my physics teacher introduced me to the concept of the Lagrangian, I was intrigued to discover that there was a uniform way to describe the phenomena that interested me. Although the terminology was difficult for a teenager to understand, my teacher possessed a talent for explaining complicated notions in a concise and clear way, and, what's more, get young students excited. I believe that the wonderful influence of my science teachers played a major role in my decision to become a physicist.

I also learnt two valuable lessons in my school years: physics is more about grasping some concepts that will eventually allow us to understand nature, than about solving mathematical problems and,  although nature is infinitely smarter than us, one does not have to be a genius to reach a deeper understanding of physics.

P.C. What did the new theories that were proposed in the 20th century (i.e. quantum mechanics and relativity) change in our previous understanding of nature?

A.H. Enormous developments followed the emergence of these theories, and it is remarkable how the same way of thinking is still apparent in modern discoveries despite the qualitative differences. Before the formulation of quantum mechanics and relativity, physics mainly focused on phenomena that could be observed in our everyday world. The whole idea of unification goes back to Newton, who looked for the common causes behind a number of diverse phenomena but, at that time, he referred to objects that were almost immediately accessible through our senses

Moreover, the mathematics of the time were designed to describe phenomena that were considered natural, hence, it is not surprising that calculus describes motion, as it was initially formulated for that purpose. Over the years, equations, for example the equations of Maxwell’s laws of electromagnetism, became more abstract, although they now described phenomena that were closer to experimental reality.

Two important physics breakthroughs happened in the course of the 20th century: relativity and quantum mechanics. The rest of the century was dedicated to figuring out whether and how the world could be compatible with these two theories. Thanks to the efforts of Feynman, Schrodinger, Dyson, and others. In other words, we may now understand that nature is described in a much richer way that what was described in the foundations of QM. Moreover, two important changes took place back then. First, the posture of unification went to a territory far removed from the human experience for the first time and, second, it was discovered that the mathematical structures used to describe nature had their own intrinsic mathematical value.

In a nutshell, I think that trying to understand the true nature of the space-time quantum mechanics and quantum field theory has been the drama of 20th century physics.

P.C Have we reached a unique point regarding the type of questions that can be articulated by modern physics?

A.M. In fundamental physics, the mysteries that we have to unravel are so deep that we often do not know how to articulate the correct questions. David Gross made an observation that I also find very interesting. He said that the most important product of knowledge is ignorance, because the more we learn, the less precise questions arise, and these questions are the driving force behind scientific progress.

We live in a very exciting period. We have to explore all these theories and deal with mundane questions to tackle the fundamental questions about space-time. In the past, we didn’t have the tools, the mental space, or good knowledge on elementary particles and their interactions that could help us find satisfactory answers. Today, there is a clear distinction between what we know and what we don’t know. Only now are the questions finally on the table. Although many people think about the importance of particle physics in the same way as in the 1960s. However, what is at stake today is much lower and much higher. Much lower because they didn’t know how to things (talk?) about things and define a particle and now these are fixed. The flipside is that we confront incredibly structural questions that they couldn’t imagine at that time.

P.C. Do you think that the recent results of the LHC, including the Higgs particle, are linked to these fundamental questions?

A.M. Yes, I believe that the discoveries of the LHC are a driving force behind the advancement of particle physics, as they can help us tackle many unanswered questions and achieve a deeper understanding of the Universe.

Even after the advancements of the last fifty years, the basic features of our world remain incomprehensible. The fine-tuning problems and other difficulties we face can be summarized as attempts to understand the following complicated puzzle: our macroscopic Universe seems almost impossible to exist because of quantum fluctuations—violent vacuum fluctuations that get more and more violent at shorter distances.

There are still many open questions that need answering: Why does gravity defy the notion of space-time in short distances? Why are there humongous quantum fluctuations in shorter distances? How is a larger Universe possible? These questions relate to the hierarchy problem and fine tuning and are divided into two stages. First, one should ask: “Why is there a macroscopic Universe that is not broken in the Planck scale,” and second: “Why are there large scale structures in the large Universe and they are not broken into Planck scale black holes?”

Besides answering these questions, the LHC can also reveal if the electroweak scale is natural. For example, the discovery of the Higgs-like boson was very exciting, as the particle had not been observed in nature, and pointed to a different direction of thinking. It was initially thought that the distinction between massless and massive particles would disappear at the higher energies regime, a theory that was later proven to be false because mass increases at higher energies. The Higgs is therefore the simplest mechanism that can smoothly connect the massive world observed at low energies with the massive world at high energies, allowing the extrapolation of physics close to the Planck scale for the first time.

When people ask me whether I am worried that the first results of the LHC did not support the existence of supersymmetry, I answer that I am no more concerned about low energy supersymmetry now than I was before the operation of the LHC began. The regions of parameter space in supersymmetric theories that have been ruled out by the LHC are no cause for worry. From another point of view, if supersymmetry does indeed provide a natural solution to the hierarchy problem, it could appear in a number of low-energy processes we could have looked for, even in earlier colliders. However, the fact that we haven’t observed these indirect processes yet has caused for some unease about the existence of supersymmetry.

P.C. If nothing shows up in the next run, would you say that at least some supersymmetric theories have been disproved?

A.H. If we just ask from the bottom up, without any theoretical prejudice put in, what kind of particles must we see, what supersymmetric particles absolutely have to be there for supersymmetry to provide a natural resolution to their hierarchy problem, it is a small fraction of all the superpartners. There are some absolutely crucial ones that have to be there—the superpartners of the top quark and of the gluon.

Although clear evidence of supersymmetry has not been found yet, a perfectly natural, beautiful supersymmetric spectrum from this bottom-up point of view is perfectly consistent with LHC data so far. In any case, within two or three years, the LHC is going to prove or disprove the existence of supersymmetry. If no superpartners are discovered, we will have to find an alternative solution to the hierarchy problem.

Nevertheless, even if the superpartners of the top quark and the gluon were discovered, the problem of the cosmological constant and many other unanswered questions of the Standard Model would persist. This is very problematic, not because of the philosophical implications or the experimental limitations, but because in this case we would still not know how quantum mechanics emerge in an accelerating Universe.

Thus, if the LHC ultimately proved that the weak scale is fine-tuned to 1 part in 10,000 and fine tuning was not observed anywhere else in physics, many theoretical physicists would possibly try to understand how this result is related to questions of space time and quantum mechanics. To conclude, there is no nightmare scenario in the case of the LHC: both answers lead to interesting paths.

P.C. What was the role that mathematics played in your career?

Α.Η. I must admit that early in my career I wasn’t a mathematical innovator and stuck to existing frameworks and concepts. However, during my research, I discovered remarkable mathematical structures that seemed to underlie the physics of scattering amplitudes. As they are very basic, I was not expecting to find applications, but it was finally proven that they can provide a fundamental way of talking about physics offering valuable insights.

Mathematics are inextricably linked to physics. Let me give you an example from the LHC; to discover new physics, you have to subtract out the mundane background from ordinary Standard Model interactions. Imagine that you want to collide two protons, and the gluons inside those particles collide and produce an exciting superpartner. The rate at which superpartners are produced would be, in the best-case scenario, maybe once a minute, but exactly the same final configuration is produced by ordinary Standard Model particles hundreds of thousands of times a second. Understanding the rate at which that takes place and then subtracting it to see something exciting sounds like a grungy, dirty job but someone has to do it: sit down, grind out all these dirty calculations, and actually predict what the rates are.

During the last five years, it has become clear that there is yet another formulation of good old-fashioned quantum field theories, which casts this picture in a different light. Completely different mathematical structures are starting to appear. Something extraordinary is going on, which at the moment is best understood in the context of these maximally supersymmetric theories. Confirming this theory would be a spectacular theoretical accomplishment.

From a philosophical point of view, I have always been a firm believer of a Platonic reality—even when I was working in a different field—and I think that everything we discover in mathematics or physics is actually out there. It is the great ideas that wait for us to discover them and expose them to the world.

P.C. Do you think that it is easy to attract the general public’s attention in HEP?.

A.H. I am often excited by the enthusiasm and the passion of people who are interested in learning more about discoveries in high-energy physics and I believe that experts are gradually more encouraged to interact with the general public. Developments occur so fast in physics that it is hard to do outreach, although it would be great for the general public to hear first-hand about how research is conducted and learn how scientists deal with extremely difficult problems.

The reason there is so much excitement with the Higgs—more than I would expect—is not that people always understand the scientific issues at stake, but because they realize that it has been the outcome of hard work and collaboration. I think that it is very important to interact with the general public or organize workshops, as such activities highlight the field and making it more popular and eventually it may inspire more people to learn about physics.