Introducing the "25 by 25" initiative 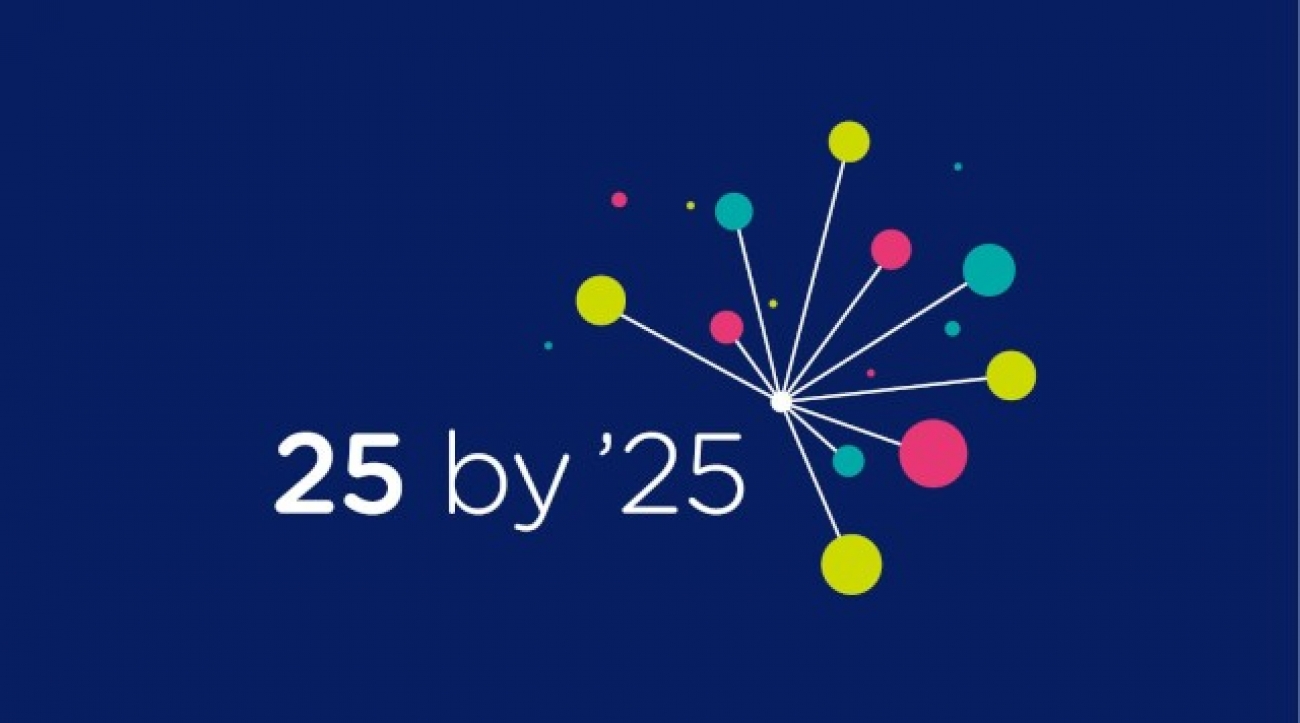 The principles of diversity and inclusiveness are enshrined in CERN’s Code of Conduct. They have been strategic for CERN as they lie at the heart of excellence while also reflecting the diversity of its Member States. Furthermore, the need to intensify the efforts to meet these principles is reflected in the 2020 update of the  European Strategy for Particle Physics with a strong commitment “to the principles of equality, diversity and inclusion that lies at the heart of all physics community’s activities”. Charlotte Lindberg Warakaulle, CERN’s Director for International Relations, stated in a recent viewpoint (February 2021): “At CERN, we have a responsibility to support and promote diversity and inclusion in science, and we, as an Organization, have to keep doing better. Just one illustration: about 20% of CERN’s members of the personnel are women, a number that we need to increase in order to reflect the society we serve and to maintain our standards of excellence: diversity, in all its aspects, and inclusion are prerequisites for the best possible science.”

Continuing its efforts to accelerate diversity, the Organization’s Enlarged Directorate has endorsed the implementation of a new strategy to increase the nationality and gender diversity at CERN. Developed by the Diversity & Inclusion Programme, the initiative called “25 by ‘25”, includes an aspirational target of 25% women across the Staff & Fellows population by the end of 2025 and a commitment to address nationality clusters within the departments for a more balanced return for Member States.CERN’s Diversity & Inclusion process has adopted a set of Global Diversity, Equity and Inclusion Benchmarks (GDEIB), for measuring the diversity and inclusion (D&I) progress. The adopted methodology has been developed with input from over 100 global experts, ensures a strategic and integrated approach to D&I progress across a number of benchmark categories.

For the EP Department, Adriana Telesca and Frederic Teubert have been appointed as the 25 by ’25 Focal Points, given their past experience on employment/administrative processes and involvement in activities aiming to promote diversity across the department. In a short interview, they explain that the first step was to lead a review assessing the current profile of the department and its status in terms of Diversity & Inclusion issues. As part of this 8-week process, they conducted a number of interviews aiming to cover a widest possible population of the department including different categories of personnel as well as different job functions. Teubert explains “We wanted to have an unbiased sample of interviewees and on top of those who responded to our questionnaire we also reached out to colleagues across the department seeking their input. Some of them were surprised in the beginning but everyone was willing to contribute and help us build a representative D&I profile for the department”.  Telesca notes that part of their challenge  is the large number of groups/people working under the umbrella of the EP department including the LHC and non-LHC experiments, the supporting groups and the administration. Creating a culture of diversity & inclusion also calls for further efforts/channels to enable cross-talks/communication between these different communities.

In creating a truly inclusive work environment, employees need to be actively involved and engaged. Adriana Telesca explains: “We started by talking to our colleagues and conducting a survey to help us evaluate the current D&I profile of the EP department. As part of the process, we also listened to what our colleagues would like to see as part of a D&I strategy. What is most important to them? How do they want to be involved in implementing a future action plan? From our side it was important to make sure that those interviewed felt heard and that the grassroots effort could improve the workplace environment for everyone”.

Frederic adds: “from our interactions we clearly sense that our colleagues appreciate the role of increasing diversity but often it is unclear which are the right tools to achieve the desired results”. Both Telesca and Teubert seem to agree that raising awareness about the value of Diversity & Inclusion, as part of this campaign, is already a positive first step towards building a new culture that will lead to tangible changes. Moreover, they both agree about the need to develop  a communication strategy about these results to ensure the impact of this activity. “Decisions can often be met with criticism but people who are informed are more likely to engage” notes Telesca. In addition, the ongoing exercise helps to identify and share  concrete examples of biases or best practices that could translate into a wider policy within the EP department.

The results of this exercise will help to create a departmental progress plan, the so-called “D&I Fitness Plan”, to be implemented over the next few years. The ongoing exercise also helped identify certain barriers/limitations that run across CERN horizontally and thus call for interdepartmental synergies and action. In parallel, a KPI Dashboard to monitor and track progress in these areas will be populated and the first results will be presented in Spring 2022.  The detailed timeline can be seen in the image below. 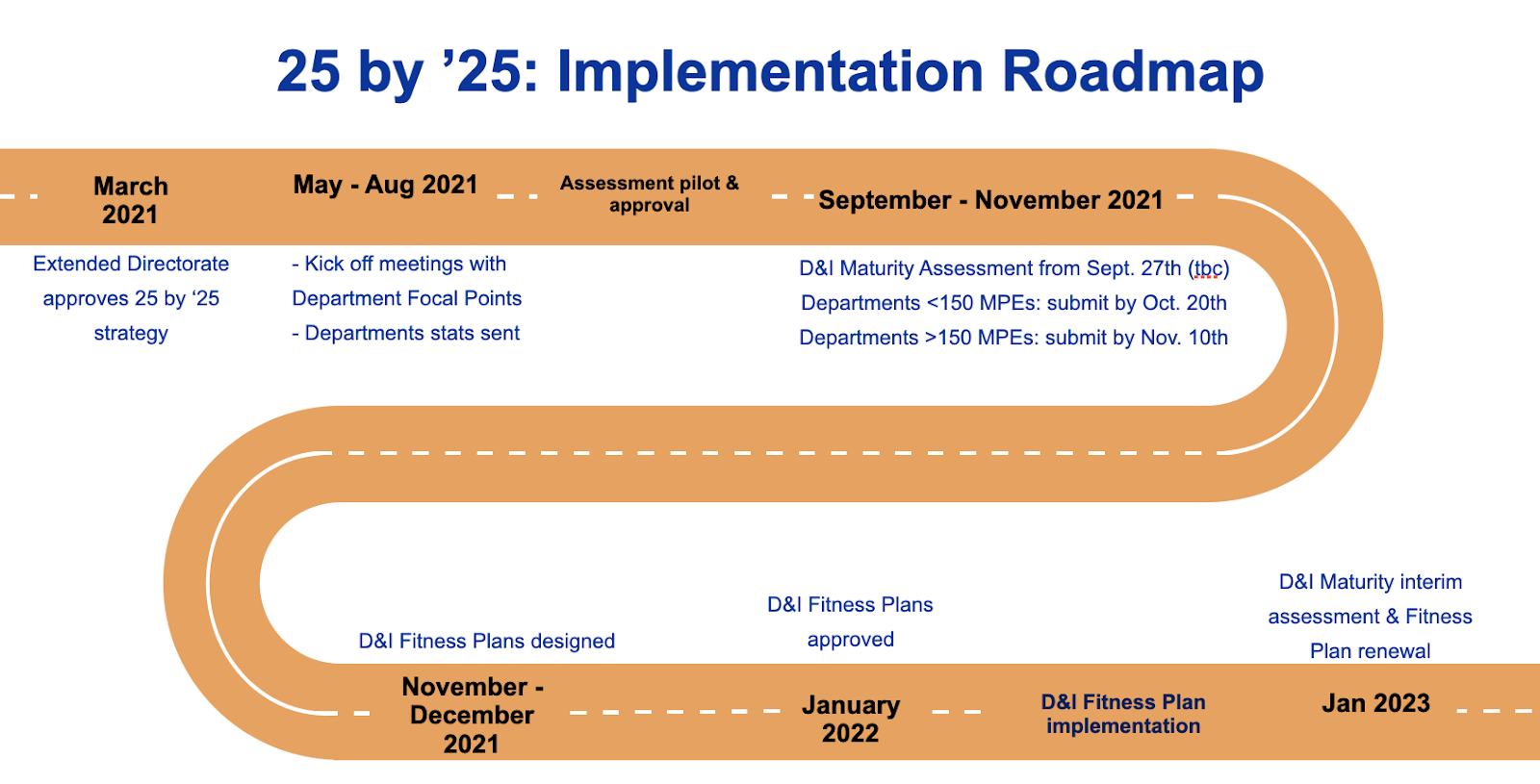 As we end our discussion, I ask them what is the lesson that they carry forward from their involvement in this process. Perhaps, one aspect that also applies in other Big Science organizations, is the need to enlarge/expand the candidates pool and strengthen initiatives that aim to inspire students in STEM. “Improving diversity and inclusion means that we need to take some steps backwards and discuss how our field can be more attractive to candidates with different genders, nationalities, ages, cultures' says Telesca. The feedback received so far reaffirms the richness hiding behind these words. One has to acknowledge this fact, in order to find the tailored/right policies that will foster a change in our future scientific collaborations”. Policies that should interpret the connotations of diversity and try to balance the talents of individuals and the wider societal struggles.