Latest Results from the AMS on the International Space Station

The Alpha Magnetic Spectrometer, AMS, is a particle physics detector operating on the International Space Station (Figure 1) since May 2011 with the aim to address long-standing open questions in fundamental physics, such as the matter-antimatter asymmetry, the nature of dark matter, the existence of exotic forms of matter, by performing accurate simultaneous measurements of cosmic-ray spectra. 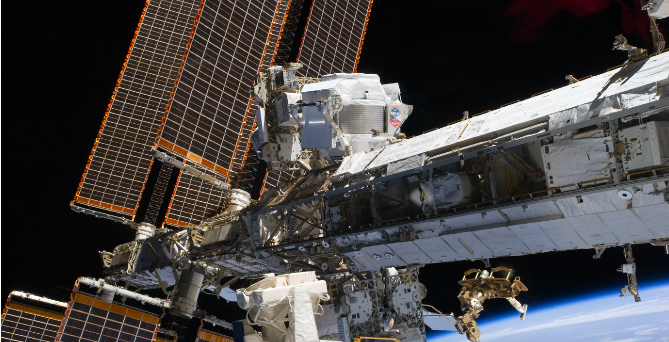 Cosmic rays are particles and nuclei of energies ranging from MeV up to 1020 eV which continuously bombard the Earth from outer space. They are mostly protons, with helium nuclei accounting for about 10%, heavier nuclei and electrons for about 1% each. Positrons and antiprotons are also present, but in small amounts: their abundance relative to protons amounts to only 1/1000 and 1/10’000 respectively.

After more than a century from the discovery of cosmic rays, there’s still much to be understood about their origin, the acceleration mechanism that makes them reach such fabulous energies, and the propagation mechanism that allows them to travel through the interstellar space.

The cosmic-ray energy spectra (i.e. the number of particles per unit time, energy, surface and solid angle, as function of energy) decrease with increasing energy roughly following a power law passing from 1 particle per m2 per second at 100 GeV to only few particles per km2 per year at 1018 eV. This has driven the two-fold experimental approach to cosmic-ray detection of employing ground-based km-size observatories to measure cosmic-ray spectra beyond 1015 eV, and space-born and balloons detectors below. However, ground-based detectors can only perform an indirect detection of cosmic-ray particles and they have to rely on models of interactions of cosmic rays with the Earth’s atmosphere to identify the incoming cosmic-ray particle. Instead, space-born detectors operating at the top of the atmosphere, onboard satellites or space stations, and to some extent also detectors on stratospheric balloons, have direct access to cosmic-ray particles and therefore can perform precision measurements of their individual spectra.

Among space-born detectors two further experimental approaches can be distinguished: magnetic spectrometers and calorimeter-based detectors. Only magnetic spectrometers are able to distinguish negatively from positively charged particles and therefore can measure the individual spectra of positrons and antiprotons, which are crucial to search for Dark Matter signals, and to address the issue of the matter-antimatter asymmetry by searching for primordial anti-nuclei relics from the Big Bang.

AMS is the largest magnetic spectrometer ever deployed in space measuring cosmic-ray antiparticles, particles and nuclei of energies ranging from GeV to a few TeV. The AMS detector includes Time Of Flight and Anti-Coincidence Counters, a Transition Radiation Detector, nine layers of Silicon Tracker, of which 7 inserted in the bore of a permanent magnet, a Ring Imaging Cerenkov and an Electromagnetic Calorimeter (Figure 2). Particles and nuclei are identified by independent measurements of their charge (Z), energy, velocity (β), and Rigidity=momentum/Z, in the TOF, Tracker, RICH and ECAL. The TRD and ECAL allow to identify 1 positron from 1 million protons. The particle charge sign is measured by the direction of particle’s track bending inside the magnetic field. This allows to unambiguously identify positrons from electrons up to the TeV scale. The energy of electrons and positrons is measured with few percent accuracy by ECAL. The rigidity of protons, nuclei and their antiparticles, is obtained by the measurement of their trajectory’s bending inside the magnetic field by the Silicon Tracker. The 3 metre lever arm allows to reach rigidities up to 3 TV. The absolute value of the particle’s charge is obtained by its energy deposition in the detector material. 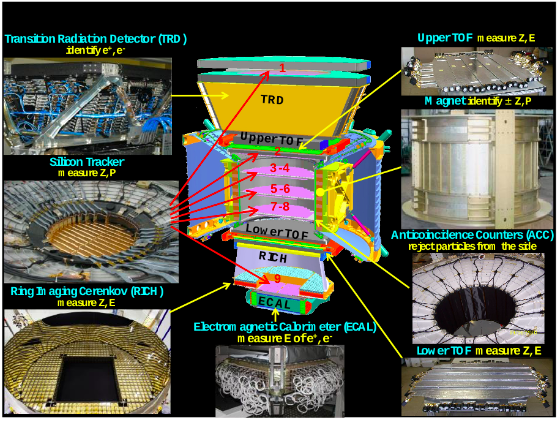 Figure 2 : The AMS detector elements and their functions. Particles arriving in the main acceptance (top-bottom) are triggered by two double layers of Time Of Flight counters; those entering from the sides are rejected by the Anti Coincidence Counter. A Transition Radiation Detector identifies leptons against hadrons. Seven layers (2 to 8) of silicon tracking detectors are inserted inside the bore of the permanent magnet, two additional layers, 1 and 9, are placed on top and at the bottom of the apparatus to enlarge the lever arm of the silicon tracker and measure particles rigidity up to 3 TV. The charge sign is measured from the bending of the particle’s track in the magnetic field. The absolute value of the charge is determined by the energy deposited in TOF and in the Silicon Tracker by the traversing particle. The two TOF layers determine the particle velocity. The Ring Imaging Cerenkov gives redundant measurements of particle charge and determines the velocity with permille accuracy. The electromagnetic calorimeter measures the energy of electrons and positrons with percent accuracy and the 3D shower reconstruction increases the power of proton rejection.

The redundancy of the AMS detector is the key to the percent accuracy of the individual spectra of cosmic ray particles, nuclei, antiparticles and light antinuclei. Since its installation on the International Space Station in May 2011, AMS has collected more than 170 billion cosmic ray events, and provided measurements of individual spectra of electrons, positrons, antiprotons, and nuclei from helium (Z=2) to silicon (Z=14) [1], and recently of iron (Z=26) [2].

AMS has recently extended the measurements of the electron spectrum to 1.4 TeV [3] and of the positron spectrum up to 1 TeV [4] precisely characterizing for the first time the energy dependence of the two spectra. AMS has observed the deviation of the electron spectrum from a E-3 power law above 42 GeV with 7σ significance (Figure 3 left and centre). AMS has also found that the positron spectrum is well described by the sum of the contributions from secondary production of positrons by collisions of cosmic rays with the interstellar medium which dominates at low energy, and of a new source of positrons dominating at high energy and exhibiting a finite energy cutoff at 810 (+310 -180) GeV. The existence of the source term energy cutoff is established at more than 4σ.

Figure 3 : Left : the AMS electron spectrum multiplied by E3 and (center) its deviation  from a E-3power law at energies above 42 GV. Right: the AMS positron spectrum multiplied by E3 (yellow points); also shown are the low-energy term describing positrons from collisions of cosmic rays with the interstellar medium (green shade) and the new high-energy source term (magenta shade).

The nature of the high-energy positron source has not yet been established, Dark Matter particles annihilation or decay, and Pulsars have been proposed as possible sources. A Pulsar signal should imprint a higher level of anisotropy in the arrival direction of positrons than a Dark Matter signal. From the analysis of the arrival directions of positrons of energies ranging from 16 GeV to 500 GeV with the current AMS dataset no deviation from isotropy is observed. Moreover, Pulsars cannot produce antiprotons and AMS has observed a striking similarity between the antiproton and the positron spectra at high energies (Figure 4).

So far, AMS has published the measurements of cosmic-ray nuclei up to charge Z=14. All spectra deviate from a simple R-2.7 power law and all harden at rigidities above 200 GV (Figure 5). Speculations of these spectral hardenings fall in three categories: a first in which the hardening is imprinted by the sources of cosmic rays, a second which explains the hardening as a propagation effect, and a third where the hardening is due to a local cosmic-ray source injecting high-energy particles. Comparing secondary nuclei spectra to the corresponding primary nuclei spectra allows to disentangle among these three categories.

AMS has observed that the spectra of light primary cosmic-ray nuclei, helium (Z=2), carbon (Z=6) and oxygen (Z=8), have identical rigidity dependence above 60 GV. Light secondary cosmic-ray lithium (Z=3), beryllium (Z=4) and boron (Z=5) nuclei are mostly produced by collisions of primary carbon and oxygen nuclei with the interstellar medium. The AMS measurements of lithium, beryllium and boron nuclei spectra have shown that they have identical rigidity dependence above 30 GV, but their rigidity dependence is distinctly different from that of primary helium, carbon and oxygen nuclei (Figure 5 left). In particular the spectral hardening of light secondary lithium, beryllium and boron nuclei is stronger than that observed in the spectra of primary carbon and oxygen nuclei with 5.6σ significance. This new observation favors the interpretation of the nuclei spectra hardening as a propagation effect.

The recent AMS measurement of heavy primary neon (Z=10), magnesium (Z=12) and silicon (Z=14) nuclei (Figure 5 right) have shown that they have identical rigidity dependence above 86.5 GV and they all harden above 200 GV. However, their rigidity dependence is clearly different from the rigidity dependence of light primary helium, carbon and oxygen nuclei with more than 5σ significance. This new AMS observation has disproven the traditional assumption that all primary nuclei have the same rigidity dependence, showing for the first time the existence of at least two classes of primary cosmic rays.

Very recently the AMS measurement of very heavy primary iron (Z=26) nuclei has been published. The spectrum of iron nuclei also hardens above 200 GV, and astonishingly above 80.5 GV its rigidity dependence is identical to those of light primary helium, carbon and oxygen nuclei (Figure 5 left).

Latest AMS results on the spectrum of heavy secondary fluorine (Z=9) nuclei show that the propagation properties of heavy cosmic rays, fluorine to silicon, are different from those of light cosmic rays, helium to oxygen, and that also secondary cosmic-ray nuclei have two distinct classes [5]. This observation challenges the current understanding of cosmic-ray propagation which traditionally was assumed being the same for all cosmic-ray species.

AMS will continue to collect data for the lifetime of the International Space Station (2030 and beyond) and will provide new accurate measurements of cosmic ray antiparticles, anti-nuclei, particles and nuclei up to nickel (Z=28) from which new and exciting discoveries can be expected.