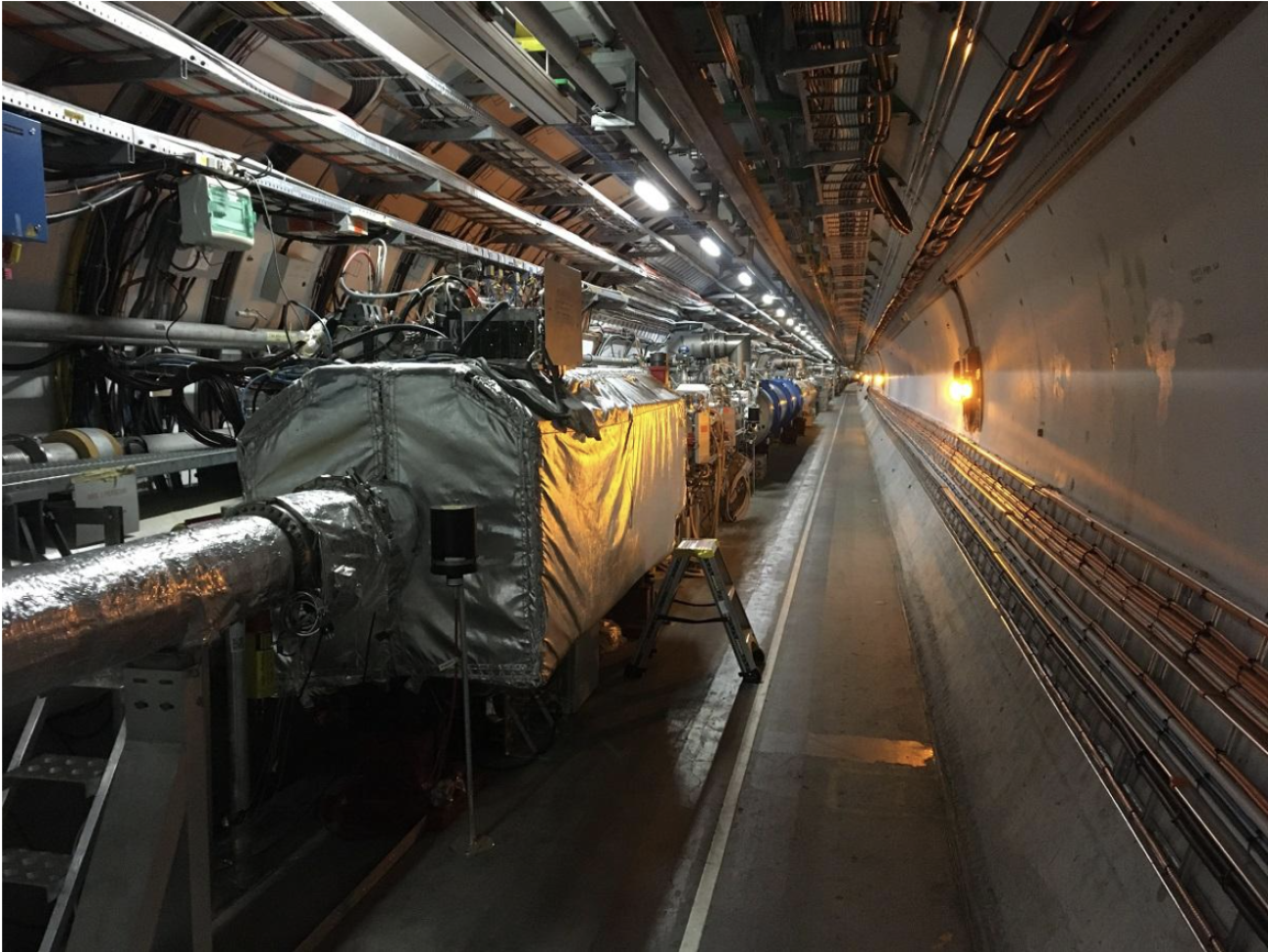 The first LHCf special run of the LHC Run 3 was successfully completed in September 2022, with the LHC providing the highest collision energy ever reached by a particle accelerator. A second record was broken for this run: the longest single fill run time, which reached the impressive duration of 57 hours.

The return of LHCf, an experiment that represents a bridge between cosmic ray physics and accelerator physics, came after several years since its last data taking at the LHC. While awaiting the possibility to take data with proton collisions at the maximum LHC energy and with light nuclei, the collaboration undertook the upgrade of part of the Arm2 detector’s acquisition system to increase its maximum achievable trigger rate and a measurement at RHIC (RHICf project) with only the Arm1 detector.

Figure 1: Panoramic view of the LHC tunnel in the LHCf Arm1 installation area, on the left side of ATLAS, taken during the detector's hardware commissioning.

An important problem in the interpretation of data obtained from ground-based detector arrays studying extremely energetic cosmic rays by measuring their secondary products in the Earth’s atmosphere, is the anomalous abundance of muons measured at ground level. This effect cannot be currently explained by models describing the development of secondary particle showers induced in the Earth’s atmosphere by the primary cosmic radiation. An improvement of these models could be possible thanks to a precise measurement of the forward production cross sections of the most relevant secondary particles directly related to the production of muons: charged pions, and kaons. The LHCf run can measure the secondary particles emitted in the very forward region, while the ATLAS central detector can count secondary particles emitted in the  central region.  Therefore the joint data taking between ATLAS and LHCf is very important for cosmic ray physics. The Arm2 upgrade activity, a technical feat involving the complete redesign of the silicon tracker read-out electronics, was conceived mainly to improve the speed of this detector, thus allowing a more efficient data taking during the low luminosity short special runs dedicated to LHCf. This upgrade was successfully completed at the end of 2021 and allowed to double the detector’s maximum DAQ rate, reaching approximately 1.5 kHz. In parallel, optimized trigger schemes were studied and implemented to allow maximizing already at trigger level the fraction of the most rare events of interest, i.e. those due to neutral pion, kaon and eta meson decays. 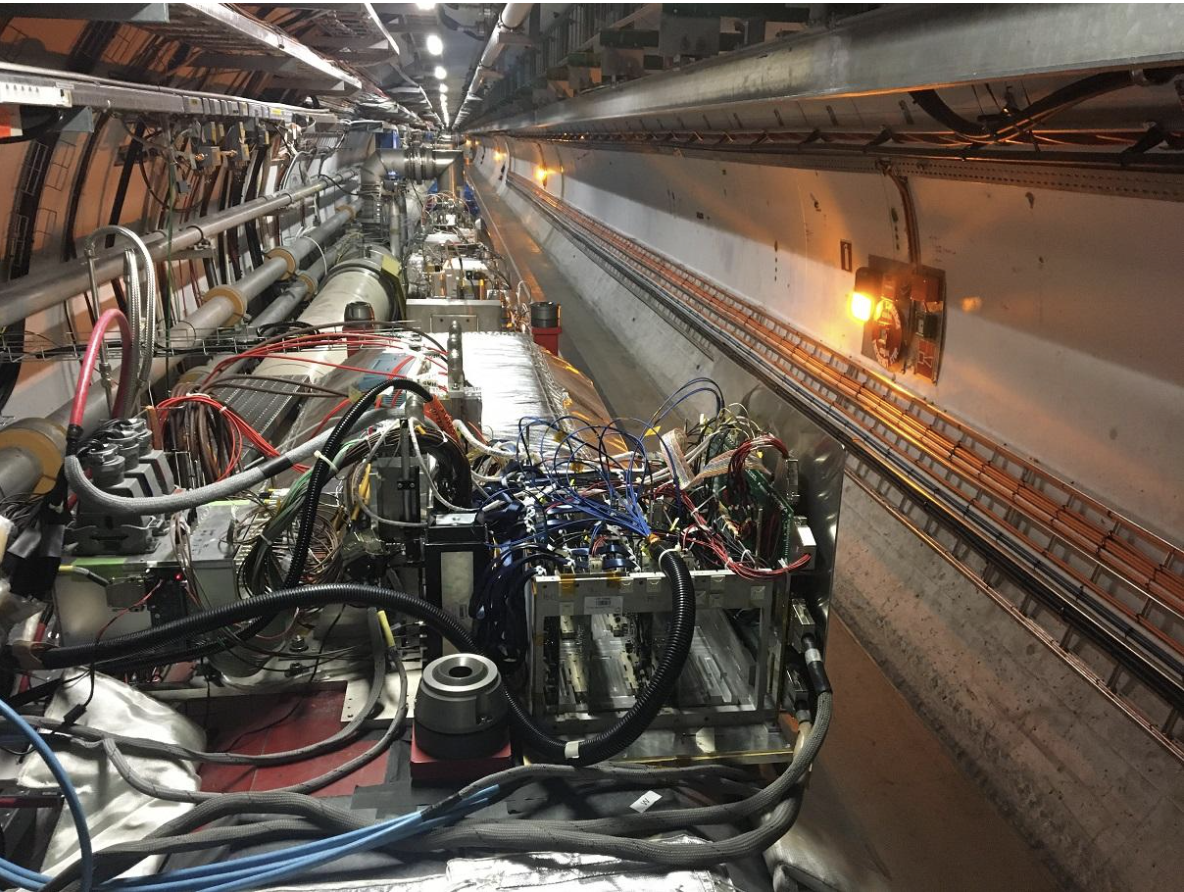 Figure 2: View of the upper face of the TAN absorber on the right side of ATLAS with a close-up of the Arm2 detector's electronics

The RHICf activity was carried out mainly to provide a lower energy measurement, compared to the LHCf ones, thus allowing to test the so-called Feynman scaling, a scaling law which is widely used to extrapolate the secondary particle production cross sections from the energy scale typical of the accelerator machines to the highest energies discovered in particles produced and accelerated by cosmic sources and continuously bombarding the Earth’s atmosphere. The measurements conducted by LHCf at the LHC and those carried out by RHICf at RHIC allowed verifying the validity of the Feynman scaling law for the photon production cross section in the pseudo-rapidity range beyond 8.8 and in the wide energy range between 1014 eV and 1017 eV in the laboratory frame.

The first LHCf special data taking in the LHC Run 3 was concluded successfully at the end of September 2022 and allowed to achieve 10 times more eta meson events with respect to the previous measurements, while the situation concerning the neutral kaons is still unclear due to the difficulty in measuring the four gamma rays produced by their decay with the extremely thin LHCf calorimeters (2 to 4 cm transverse size). This was the LHCf’s first data-taking run at the LHC’s record collision energy of 13.6 TeV and this run was also characterized by the record time of 57 hours duration of a single LHC fill, meaning the possibility for the experiments to have a real improvement in the data-taking efficiency. The LHCf trigger signal was shared with the ATLAS experiment, which recorded data for all events triggered by LHCf. This common purpose represents the starting point for new combined data analyses. For the first time the hadronic modules of the ATLAS ZDC were readout by LHCf to improve the performance for the study of hadrons and the ALFA and AFP systems were also used in combination with LHCf, thus enhancing the scope of the physics program of the LHCf special run. This five-day run is likely to be the final LHCf run involving proton-proton collisions, because for the next data-taking period in Run 3 the collaboration hopes to study proton-light ion collisions that further emulate realistic collision of primary cosmic rays with the Earth’s atmosphere. 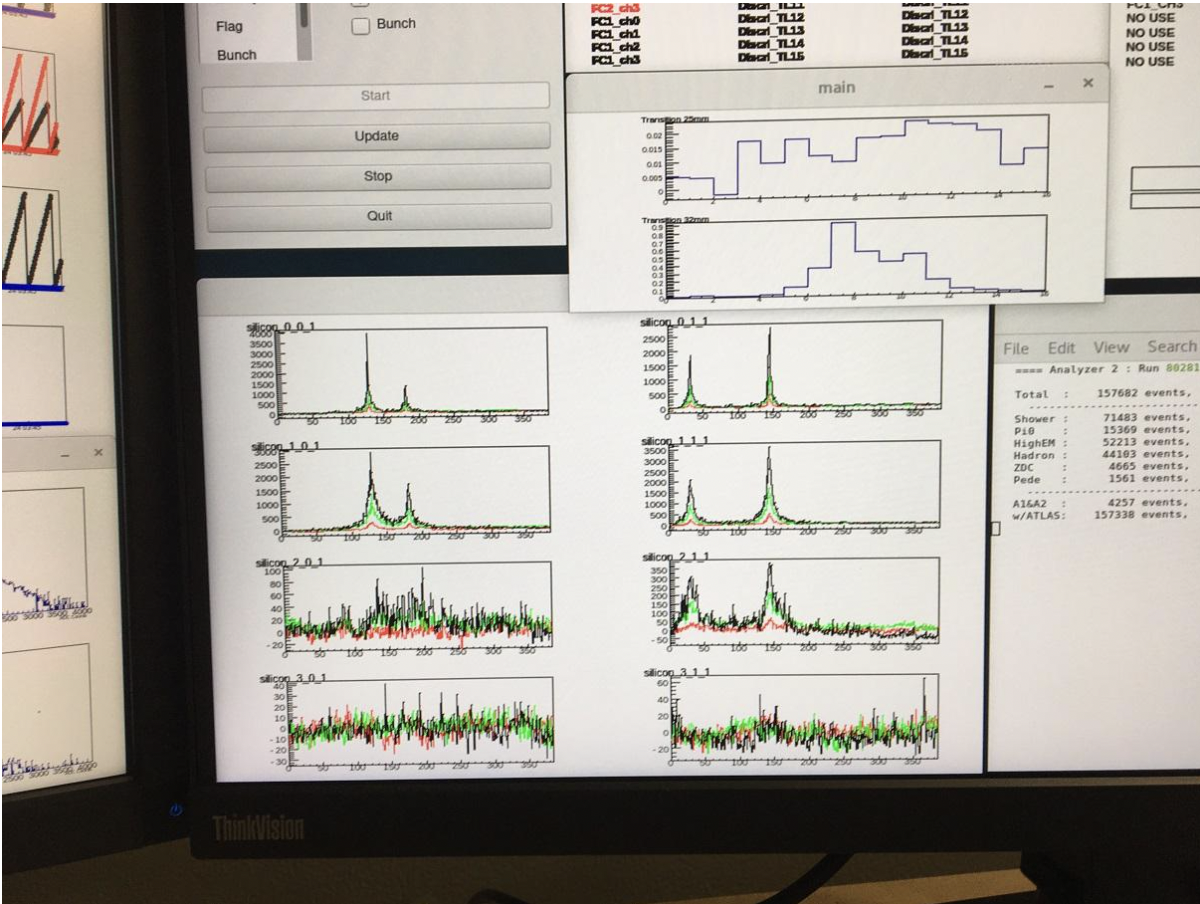 Figure 3: Online event monitor displaying an event with two gamma rays detected separately in the two calorimeter towers of the LHCf Arm2 detector. At the eight plots at the bottom on can see the x (left) and y (right) views of the transverse shape of the shower signals reconstructed at four different depths inside the calorimeter with the silicon microstrip tracking system integrated in the detector.

The LHC, with its high energy and controlled environment, provides the perfect place to simulate and study cosmic rays and LHCf is currently the only experiment in the world that can measure these interactions at the highest reachable energy and at extreme pseudo-rapidity, two critical ingredients for cosmic ray physicists.