For decades astronomical observations have indicated the existence of large quantities of dark matter in the universe. Until today, the nature of dark matter has not been understood and is therefore a central question in fundamental physics.

The axion is among to the most promising candidates to explain dark matter. It was originally introduced to solve the so-called ”strong CP problem” in particle physics. The absence of measurable CP violation in the strong interaction is one of the most puzzling features within the Standard Model of particle physics. An elegant solution to this puzzle was proposed by Peccei and Quinn in the year 1977 [1, 2]. In this theory the Standard Model is extended with a new global chiral U(1) symmetry, the Peccei–Quinn (PQ) symmetry U(1) PQ. The PQ symmetry is broken spontaneously, which introduces a mechanism to suppresses the CP violation dynamically. This theoretical concept predicts the existence of a new, still undiscovered, elementary particle, the axion [3, 4]. Remarkably, it is found that this could also explain the dark matter in the universe [5, 6, 7]. Today the axion is considered to be a very well-motivated explanation of dark matter.

The PQ symmetry breaking can take place before or after inflation thus impacting the axion mass range compatible with dark matter. For the pre-inflationary PQ scenario  the value of the initial parameter θi of the dynamical field in the PQ model before QCD phase transition is correlated to the dark matter axion mass (shown further below in Fig.2). In the case of post-inflation PQ symmetry breaking the axion mass are in the range of 26 μeV < ma ≤ 15 meV, depending on the model.

Several experimental approaches have been developed to search for axion dark matter in the last decades. Sensitivity to relevant axion models, however, could be reached only lately [8, 9, 10, 11]. None of these experiments have found any indication for axions. However, some of the most interesting regions of the phase space are still unexplored, such as the mass range around 100 µeV, which is consistent with axions as dark matter if the PQ symmetry is broken after inflation [12]. This region will be explored by the MADMAX experiment for the first time.

The international MADMAX collaboration, founded in October 2017, is developing the MADMAX experiment [13] to be ultimately run at DESY after 2025. This will be the first implementation of the concept of a dielectric dark matter haloscope [14]. The detection principle is based on the conversion of axions into photons in a strong magnetic field at the interface between media with different dielectric constants. The MADMAX design consists of multiple dielectric disks as shown in Figure 1. The tiny power produced in the axion-photon conversion is enhanced by coherent photon emission from multiple dielectric disk surfaces leading to constructive interference. As the mass of the axion, and therefore the frequency of the resulting photon, is unknown, a large frequency range needs to be scanned. Through appropriate positioning of the disks, the frequency range in which the signal enhancement (boost) occurs can be adjusted. After a sufficient measurement time to reach axion sensitivity in the corresponding frequency range, the disk configuration is readjusted to the subsequent frequency range. In order to be detectable by state of the art radiometers the signal power of the booster needs to be of the order of 10−22 W. Simulations [14, 15] of the experimental setup show that boost factors of > 104 can be achieved for a reasonable frequency bandwidth. This allows to cover a significant portion of the unexplored parameter space.

Figure 1: Multiple dielectric interfaces consisting of a mirror and several disks placed in an external magnetic field Be and a receiver in the field-free region.

Below, Figure 2 we show the estimated sensitivity to the axion-photon coupling gaγ as a function of the axion mass compared to existing limits and projections from other experiments. The figure also shows the expected sensitivity of the MADMAX prototype with smaller disks and weaker magnetic field. It can explore uncovered parameter space, while the QCD axion line will not be reached with the prototype.

A schematic of the proposed MADMAX setup is shown in figure 3. It can be divided into three main components:

• The booster, consisting of a mirror (ε = ∞) at the far end and the dielectric disks that can be positioned within a few µm precision by motors,

• The optical system including the focusing mirror and the antenna, which is used for detection of the emitted power as well as receiver and data acquisition (DAQ).

The disk material to be used must fulfill several criteria. It needs to have a high dielectric constant ε > 10 as well as a low dielectric loss tan δ < 10−5 . It also needs to be mechanically stable at cryogenic temperatures and in a strong magnetic field. Presently, lanthanum aluminate (LaAlO3) and sapphire (Al2O3) are the most promising candidates. Studies to investigate the exact properties of these, and other materials, are ongoing.

For the low frequency range below 40 GHz the proposed principle of microwave detection is based on heterodyne mixing of a preamplified signal [18]. For the first low noise preamplifier stage HEMT detectors will be used [19]. Such detectors are frequently used also in radio astronomy applications. The sensitivity of the receiver is inversely proportional to the system noise temperature. Therefore, the booster as well as the optical systems will be housed in a liquid helium cryostat. 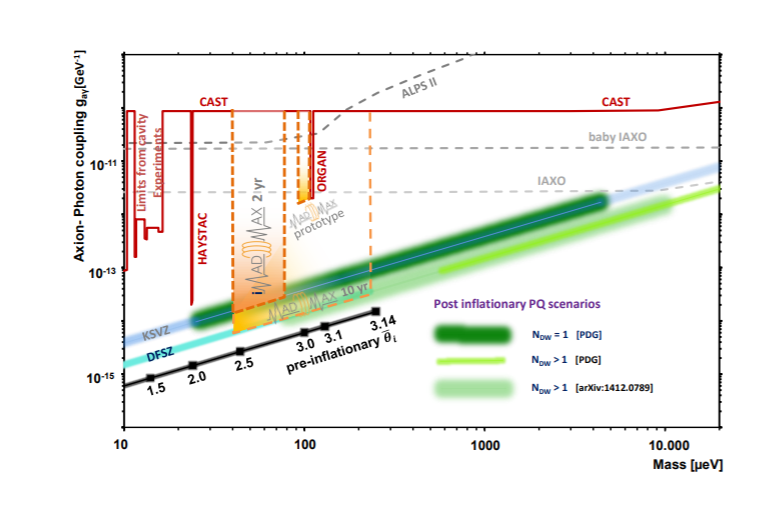 Figure 2: Sensitivity of MADMAX shown in the parameter region spanned by the axion/ALP mass ma and the axion/ALP-photon coupling gaγ. The diagonal blue and green bands indicate two prominent QCD axion models and some post-inflation scenarios, respectively. Limits from searches with cavity haloscopes [8, 9, 10, 11, 16] and the axion helioscope CAST [17] are shown with red full lines while the expected sensitivity of future experiments are indicated with gray dashed lines. The projected sensitivity for the three phases of MADMAX (prototype, iMADMAX-2 years and MADMAX-10 years) is shown in orange dashed lines. The prototype assumes 20 disks of 30 cm diameter in a 1.6 T field at 8 K within 90 days measurement time (more details on assumptions in the text).

First test setups for demonstrating the feasibility of the booster as well as a receiver and DAQ chain have already been developed [13, 20]. 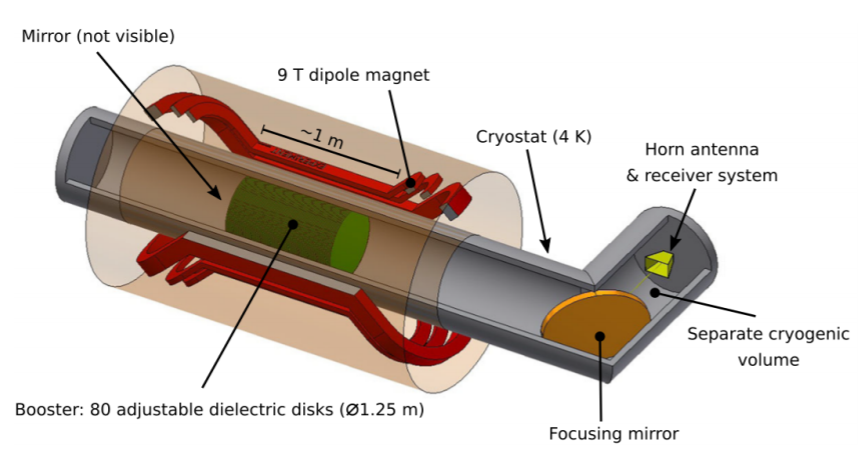 Figure 3: Design of the MADMAX approach consisting of the magnet (red racetracks), the booster with the dielectric disks (green) and a mirror (copper disk at the far left) as well as the receiver (yellow). A focusing mirror is shown as an orange disk at the right. The figure is not to scale.

In order to show that a booster with the predicted electromagnetic properties can actually be built and to verify the simulations, a prototype setup with several sapphire disks in front of a mirror has been installed. Precision motors can change the disk positions with an accuracy of a few µm. The electromagnetic behaviour of the system has been analysed using a Vector Network Analyzer (VNA) connected to an antenna. The phase and amplitude of the reflected signal have been measured as a function of the frequency. For this simple system there is a good agreement between the simulations and measurements.The receiver and DAQ systems were used for determination of the sensitivity with the available HEMT pre-amplifiers. A “fake-axion” signal with a power of ∼ 1.2 × 10−22 W and a bandwidth of about 10 kHz was generated and injected into the HEMT sitting at 4 K liquid helium environment. This fake axion signal could be detected and properly identified in a cross-correlation blind analysis within two days of measurement time with & 4.8 σ separation from background.

Prototype tests at CERN with the Morpurgo Magnet

MADMAX is presently starting the prototype phase, which will demonstrate the experimental technology in all its aspects, and provide a booster system that can be scaled to the final experiment. To test the prototype and to verify the overall concept inside the B-field, a proposal to use the Morpurgo magnet was submitted to the CERN SPS Committee [21]. The Morpurgo magnet, located in CERN EHN1, is a dipole with a peak field strength of 1.6 T and a large aperture particularly well suited for the tests to be performed during the winter shutdowns – as no particle beam is needed for the experiment and the EM activity is lower in the hall. The reorganization of the floor map around the Morpurgo magnet needed is shown in Figure 4, as well as a detailed view of the cryostat. 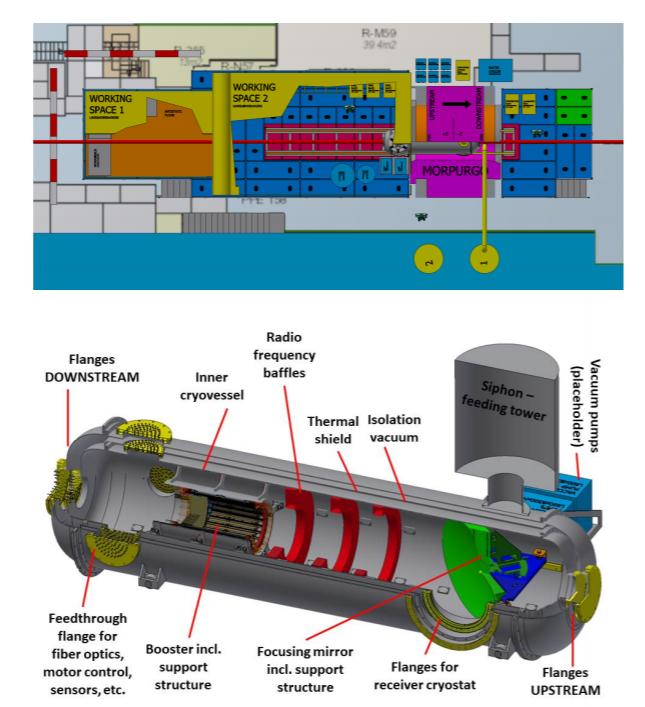 Figure 4. Top: Proposed floor plan around the Morpurgo magnet to allow for the installation of the MADMAX prototype (here the prototype is inside the magnet). Bottom: Detailed view of the prototype cryostat with a booster of 20 disks of 30 cm diameter.

Positive feedback has been received from the committee, the proposal has been accepted and recently endorsed by the research board. It is planned to use the Morpurgo magnet for first mechanical tests of subcomponents of the prototype during the winter shutdown 2021-2022. The prototype will be built and fully commissioned (without an external B-field) at Hamburg and should be available for measurements inside the Morpurgo magnet for the winter shutdown periods after 2022. Provided that the tests in the magnetic field of Morpurgo are successful and a reliable understanding of the booster’s optical behavior can be achieved, it is planned to use the prototype inside Morpurgo to produce first competitive limits for axion-like particles (ALPs) in the mass range around ≈ 100 µeV as shown in cyan in Fig. 2. A sensitivity to the ALPs photon coupling (5 σ signal above system noise) down to ≈ 10−12 GeV−1 over a mass range of ≈ 10 µeV can be achieved using the following assumptions: a system noise temperature of Tsys ≈ 8 K; a coupling efficiency of 50% between the axion field and the receiver as compared to the 1D calculations (loss effects, antenna coupling); a readjustment time of the booster disks between different optimized scanning ranges of 1 hour; and a scanning time of 90 days with a boost-factor bandwidth of 20 MHz. First competitive physics results in terms of ALP searches are expected in 2023.

MADMAX will be the first implementation of the concept of a dielectric haloscope, the only to-date to provide a sensitivity to the most favored dark matter axion model in the range around 100 µeV. The experiment is entering the prototype phase, which will demonstrate the experimental technology in all its aspects, and will provide a prototype booster system that can be scaled to the final experiment. The measurements of the MADMAX prototype during the winter period in the CERN Morpurgo magnet in North Area of CERN Prevessin will be a key milestone towards realization of the full-scale MADMAX and has been approved by CERN's research board.