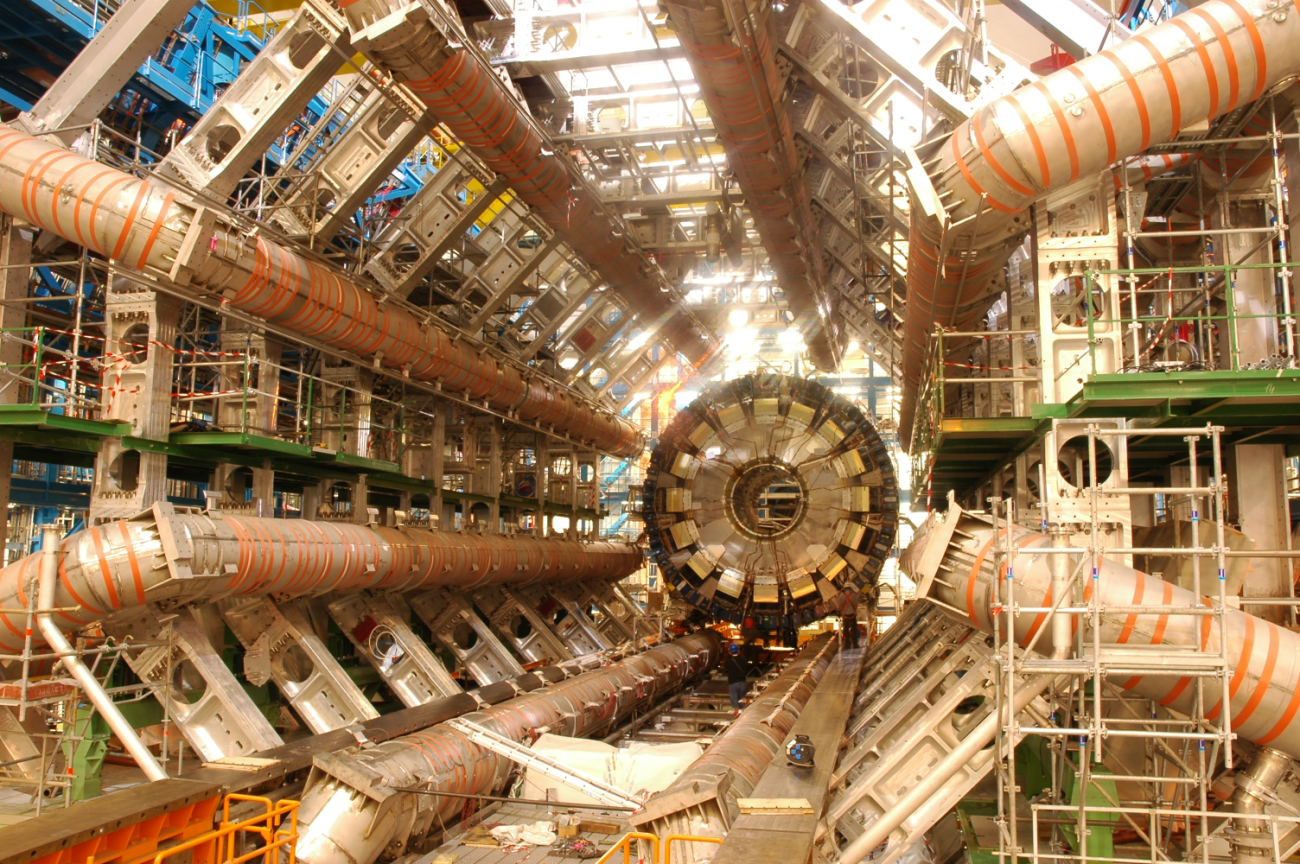 The ATLAS Magnet Team, part of the EP-ADO-SO section, has the principal responsibility for maintenance and operation of the ATLAS Superconducting Magnets. This effort is supported by a large number of colleagues, in particular from EP-DT, TE-CRG, EP-ADO, SY-EPC, EN-CV, EN-EL, and the institutes IHEP-Protvino (arranged by TE-MPE) and JINR.

As part of our mandate, we also provide commissioning and trouble-shooting support for other superconducting magnets at CERN’s experiments, such as the Morpurgo dipole, the VERTEX split-coil solenoids, and the COMPASS and AEGiS superconducting detector magnets.

Besides commissioning and trouble-shooting support for existing magnets, we support the scientific community in the design and development of the next generation of detector magnets, in particular through the newly formed EP Magnet Working Group.

The EP department has recently launched a 5-year R&D project on detector technologies including superconducting detector magnets. In close collaboration with EP-CMX-SCI, we are working to develop superconducting detector magnet technology for the present and future experiments at CERN and elsewhere considered by the global particle physics community. Thus far, three topics are pursued in the context of EP R&D.

Firstly, we are working to develop conceptual designs for a future superconducting dipole magnet, to be used as a general purpose user facility in the North Area. This magnet will generate 4 T over a free bore volume of about 1 m3. Different magnet concepts are being considered, which includes a split-coil geometry (Fig. 1) and a flared-end geometry. 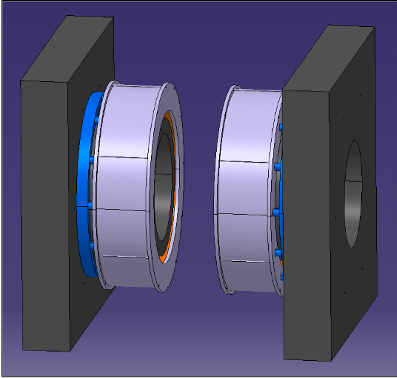 Fig. 1: Conceptual design for a future 4 T superconducting dipole magnet, to be used as a future general-purpose user magnet facility for the North-Area. Here shown: A split-coil variant, in the style of M1.

Secondly, we are developing a snubber for the purpose of suppressing arcing in detector magnet circuits during slow dumps. This development is motivated by the ATLAS Toroid circuit, where the operating temperature of the breakers is found to increase with successive circuit discharges, a phenomenon which is understood in terms of arcing on the breaker contacts. A snubber is a fully passive element that is installed parallel to the breaker. During breaker opening, it absorbs the parasitic stored magnetic energy that is present in the circuit due to the long busbar lengths, thus avoiding a large voltage spike and arcing. To demonstrate the snubber technology, we have constructed and tested a small demonstrator, which was tested at the Cryolab and showed successful suppression of arcing. Capacitor endurance studies were also successfully completed, and the full-size resulting snubbers are foreseen to be installed into the ATLAS Toroid circuit later this year.

Thirdly, we are currently setting up a small cryogenic test stand, to allow for the characterization of conductors and small coils. This facility will feature a 5 T solenoid which was developed with support from our colleagues in EP-DT.

The NA60+ experiment is a proposed experiment for the North Area, exploring high µB matter with rare probes. This project, initiated by INFN and EP-DT, features a normal-conducting toroid magnet with a magnetic field of 0.5 T over a magnetic volume of about 120 m3. To test the technology, a small-size demonstrator with a magnetic volume of about 1 m3 is presently being finalized (Fig. 2), which we will test together with our colleagues in the coming weeks. This demonstrator allows us to cross-check various aspects of the design. 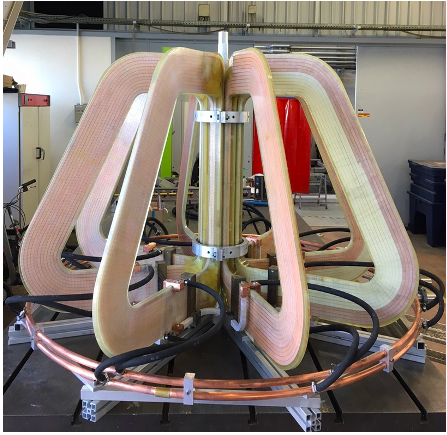 The technology development for NA60+ is also of interest for Alice, as a new Alice3 magnetic configuration is proposed for operation after LS4. The preliminary conceptual design features a normal-conducting solenoid and a dipole each generating 0.5 T in their bores (Fig. 3). This magnetic configuration is similar to the present one, albeit featuring a solenoid length of just 4 meters and a free bore radius of 2 m. The close proximity of the solenoid and dipole gives full pseudo-rapidity coverage but does result in substantial forces and torques (with torques up to 32 kNm and forces up to 5 kN). So far, the preliminary studies have focused on the magnetic field, the forces and torques, cooling considerations, and field integral studies. 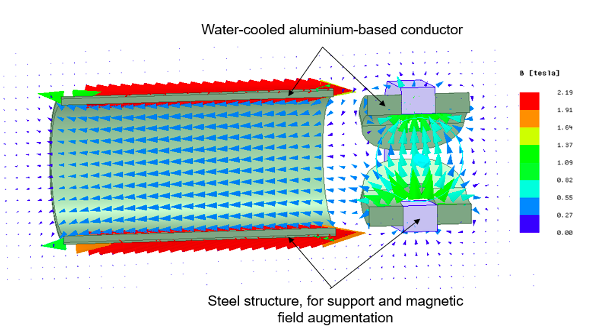 In close collaboration with Prof. Ten Kate of the University of Twente, we are currently preparing the design of a large superconducting dipole for the BabyIAXO experiment. This experiment, proposed by the IAXO collaboration, is to be to be hosted at DESY to further the search for axions. The magnet will generate a 2 T magnetic field over two bores, each with a length of 11 meter and a free bore diameter of 0.7 m (Fig. 4). The coils feature aluminium-stabilized Nb-Ti superconducting conductors and are arranged in a common-coil geometry. The cooling to 4 K is arranged with cryocoolers. We have constructed a cryogenic demonstrator and are testing it to cross-check the proposed cryogenic and HTS-based self-protected current lead technology for BabyIAXO. The next step is to proceed towards a final design and then towards construction. 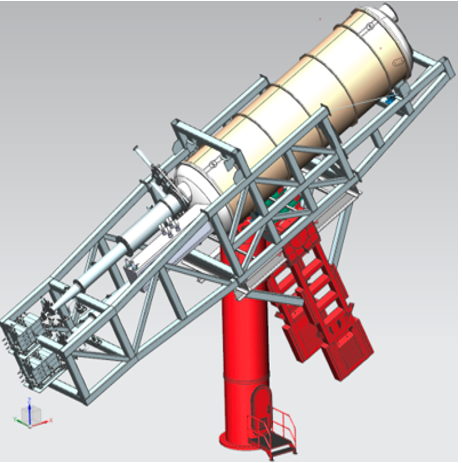 Superconducting ultra-transparent solenoid for the FCC-ee

The FCC-ee IDEA concept features a 2 T superconducting solenoid with a free bore diameter of 4 m and a length of 6 m. An ultra-light tracker is placed in the bore of the solenoid, and a double-readout calorimeter is present between the solenoid and the yoke. The instrumented return yoke returns the magnetic flux from the solenoid and allows for muon tagging. This magnetic configuration is very efficient, providing a significant magnetic field magnitude over the tracker inside the bore and in the return yoke where it is needed, but not in the calorimeter placed between the solenoid and the yoke, where it is not needed (Fig. 5).

As the particles emanating from the interaction point have to tunnel through the solenoid to reach the double-readout calorimeter, it is important that the solenoid and surrounding vacuum vessel are as transparent to particles as possible. For the superconducting coil itself this has implications for quench protection and mechanics, whereas for the vacuum vessel this mainly concerns mechanics. Optimal particle transparency may be achieved through a combination of smart material choices, smart mechanical structures, and high stress tolerance in the materials used. For example, aluminium is a favourable choice for the cold mass, as it combines excellent mechanical, thermal, and electrical properties for a given amount of mass and radiation transparency. For the vacuum vessel, a honey-comb structure is favourable as it accommodates the pressure differential with a minimal amount of material.

In recent months we have been focused on the quench protection aspect of the superconducting coil. A new FEM-based quench simulation model was developed and bench-marked against the measured quench behaviour of the ATLAS Central Solenoid. With this model we are exploring techniques to optimize the quench behaviour, for example using pure-aluminium quench propagation strips as is used in the ATLAS Central Solenoid. In addition, the implications of energy extraction, quench-back, and quench heaters for the FCC-ee solenoid are investigated.

For the vacuum vessel, we have previously proposed an aluminium-based honey-comb structure and currently our colleagues in EP R&D Work-package 4 are exploring a promising vacuum vessel technology where the aluminium is replaced by carbon, thus yielding further improvements in the transparency. 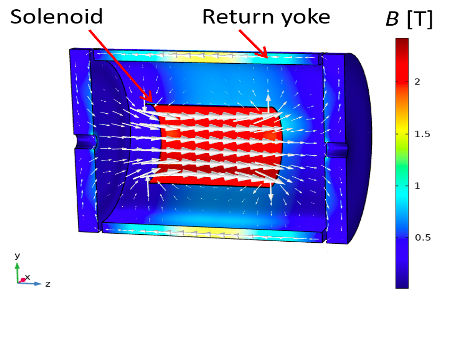 The baseline design for FCC-ee features a low-temperature-superconducting (LTS) material Nb-Ti. This material is well understood, with good mechanical properties and cost-effectiveness, but it does require a low operating temperature (4.5 K) and limits the bore field to a practical upper limit of about 4-5 T in large-scale superconducting detector magnets.

The AMS-100 experiment is a 40 t detector to be launched with SpaceX Starship or a comparable heavy lifting rocket into space and located at Lagrange point 2 (Fig. 6). The experiment allows for very high energy particle detection in space with a sensitivity improved compared to AMS-02 on the ISS by 3 orders of magnitude. This project was initiated by Prof. Schael of RWTH Aachen. We are developing the magnet design together with colleagues from RWTH Aachen, EPFL, and the University of Geneva. AMS-100 features an ultra-transparent 1 T superconducting solenoid over a free bore diameter of 4 m and a length of 6 m, with similar dimensions and requirements as the FCC-ee ultra-transparent solenoid. However, the AMS-100 magnet relies on thermal radiation to deep space for cooling, thus imposing an operating temperature of 50 to 60 K, well above the temperature at which an Nb-Ti is superconducting. Thus, the use of an HTS material such as ReBCO is unavoidable.

HTS-based conductors present a variety of challenges such as quench protection, especially in space where the available infrastructure is necessarily rather limited. To protect the magnet against quenches, non-insulated coil technology is proposed for AMS-100, allowing current to quickly redistribute to neighbouring conductors in case of a thermal runaway.

The AMS-100 magnet design is quite challenging, also due to the need for cancelling the magnetic momentum with a compensation coil. Nevertheless, this project is very interesting as the underlying magnet technology has wide-ranging applications for detector magnet technology in general. 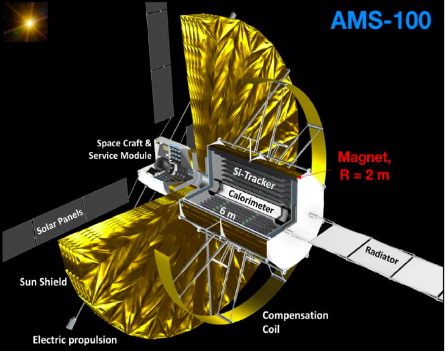 In recent months, our focus has been on quench protection simulations and the resulting mechanical response of the magnet. In the coming months, we will test a small-scale demonstrator coil which is presently being constructed at RWTH Aachen.

The design and development activities of the ATLAS Magnet Team are made possible thanks to the support from CERN colleagues, in particular from the CERN ATLAS Team, the EP Magnet Working Group (comprising EP-CMX-SCI, EP-DT, and EP-ADO), and the Cryolab. We thank our colleagues for their support!

The combination of maintenance, operation, and R&D allows us stay up to date with the state-of-the-art of superconducting detector magnet technology, for the purpose of meeting the short-term and long-term needs of CERN, the experiments, and external institutes. Our activities benefit strongly from collaboration and synergies, and allow us to pursue innovative solutions as well as train the next generation of experts in the field of detector magnets.