A new CEDAR for the NA62 experiment 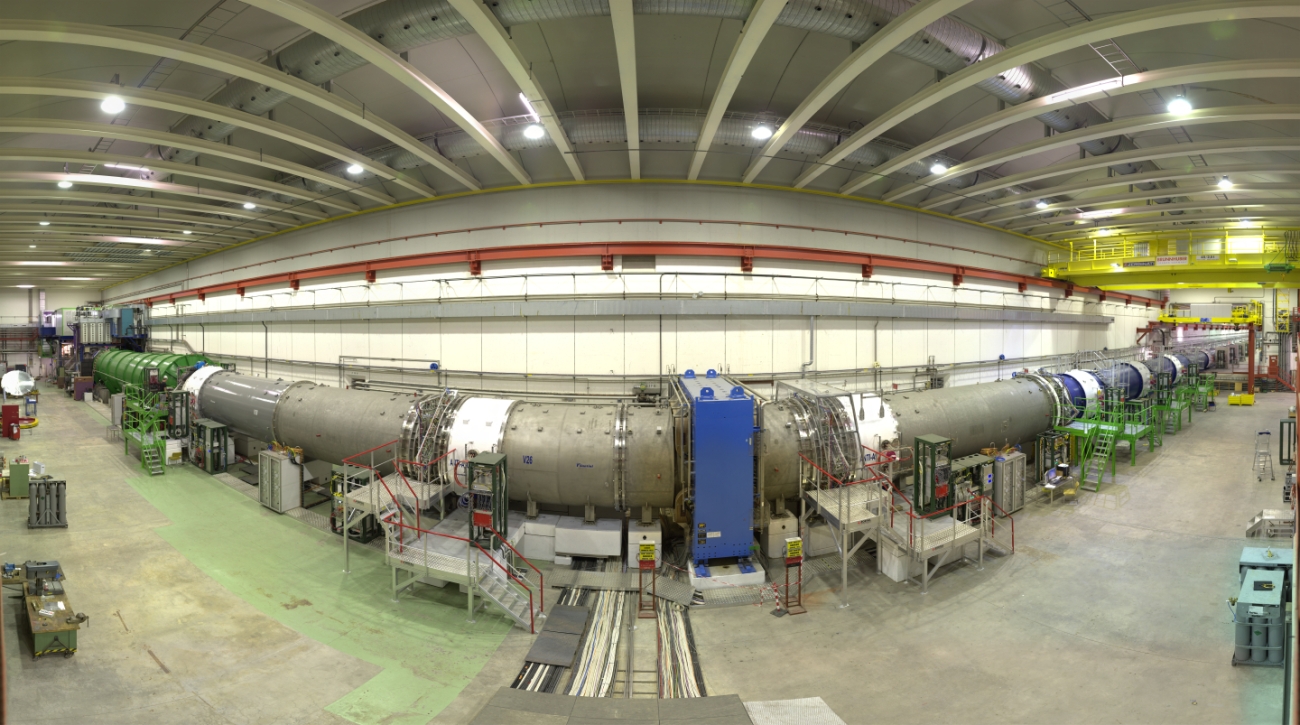 The NA62 experiment at CERN studies kaon decays using a decay-in-flight technique, with the primary aim of the precise measurement of the K+ → π+νν branching fraction. The kaons are delivered to the experiment in a beam of 75 GeV/c positively-charged hadrons, with the  beam composition dominated by pions and protons. For NA62 to operate it is critical to be able to distinguish the small kaon component at the nominal beam rate of 750 MHz.

The identification of beam particles is made using a differential Cherenkov detector (CEDAR), which is sketched in Figure 1. When the CEDAR is used with a beam of fixed momentum, Cherenkov light is produced at an angle that depends on the pressure of the gas radiator and the mass of the beam particle. A Mangin mirror focuses the light into a ring image, producing rings of different radii for each type of beam particle.

The CEDAR has a variable-aperture diaphragm situated at the position of the ring image. Beam particles can be distinguished by selecting a narrow aperture (less than 2mm), where the light from only one type of particle can pass through the aperture. The criteria for particle detection is to have coincident signals on at least 6 of 8 photo-multipliers (PM) located behind the diaphragm. This is called a 6-fold coincidence. Such criteria requires the CEDAR to be aligned to the beam with sub-mm precision.

Figure 1: A sketch of a CEDAR counter, indicating the beam direction, the path of the Cherenkov light generated by the particle, the main parts of the optical system, and the eight photo-multipliers.

The CEDAR introduces the largest contribution of beamline material at NA62, corresponding to about 4% of the hadronic interaction length. The multiple scattering introduced by the CEDAR broadens the beam profile, contributing extra rate in the detectors close to the beamline, and potentially to background in physics analyses.

The aim of the CEDAR-H project is to replace the existing CEDAR with a variant specialised for NA62. The main goal is to reduce the amount of material in the CEDAR by switching the radiator gas from Nitrogen (N2) to Hydrogen (H2), and we expect a factor of 5 reduction in the CEDAR material by making this change. As the CEDAR was not originally designed to work with Hydrogen, a new optical system optimised for NA62 was designed. The first beam-test of the new CEDAR took place in October/November 2022.

The CEDAR-H was designed in 2021 by researchers at the University of Birmingham, UK. From there, the CERN BE-EA group took responsibility for preparing the new detector. An order was placed to produce a new Mangin mirror and chromatic corrector, both made from high-quality quartz with sub-micron tolerance on their shape. Installing the new optics required aligning them with micro-radian angular precision, and a laser-based alignment protocol was developed with colleagues from SY-BI. A monumental effort was needed to reverse-engineer, document, and prepare as-built models of a number of undocumented mechanical components used in the existing CEDARs. Finally, new infrastructure in H6 was developed for the detector commissioning, both for data acquisition and the gas supply.

The CEDAR-H was first placed in the H6 beamline in the CERN North Area on October 12th, as seen in Figure 2. The CERN survey team aligned the CEDAR vessel to the nominal H6 beam axis with a few mm tolerance. Considerable emphasis was placed on identifying and mitigating the risks associated with the use of flammable gases (Hydrogen), especially to isolate potential Hydrogen leaks from any electrical equipment in the area.  The instrumentation of the CEDAR was handled by the SY-BI-XEI group, while EP-DT-FS took care of the gas system. This included setting up two-way communication between the beam line control system and the NA62 gas control system, and the storage of all variables needed for the data analysis in the NXCALS database.

Figure 2: The CEDAR-H installed on the H6 beam-line, viewed from the downstream side, while members of SY-BI are working on the diaphragm motor control. The pink plastic seen to the right of the image is used to isolate the electronics related to the alignment motors from potential Hydrogen leaks.

Once the installation and setup were complete, the north area beam experts set the H6 beam momentum to 75 GeV/c and ensured the beam was parallel with the beam axis at the position of the CEDAR. Hydrogen was filled in the vessel for the first time on October 28th.

The first objective of the beam-test was to determine whether it was possible to align the CEDAR-H to the beam with the necessary precision. The alignment is considered to be correct if the counting rate is equal (within a few %) in each of the 8 PMs with the diaphragm aperture smaller than 1mm, and the number of 6-fold coincidences are maximised, as this indicates the Cherenkov rings are centred in the diaphragm aperture. This objective was achieved without any issues, proving the optical system (and its alignment within the CEDAR) are in good shape.

The second objective of the beam-test was to measure the CEDAR efficiency. To test this, a pressure scan was made with a wide diaphragm aperture of 2.3mm. During a pressure scan, the pressure is reduced from 4.4 bar down to 3.6 bar: as the Cherenkov rings change size when the pressure is varied, the Cherenkov light from protons, kaons and pions enter the diaphragm at different pressures. By counting the number of 6-fold coincidences as a fraction of the number of particles passing through the CEDAR, the efficiency of the particle detection can be assessed. The test showed there are 6-fold coincidences for more than 99% of the particles, indicating excellent performance of the device. The pressure scan results can be seen in Figure 3.

Figure 3: The number of 6, 7 and 8-fold coincidences per trigger are shown as a function of the CEDAR pressure, with a diaphragm aperture setting of 2.3mm. From left to right the peaks correspond to the pion, kaon, and proton. Each point corresponds to one North Area extraction of the CERN SPS.

The final objective was to assess the ability of CEDAR-H to distinguish kaons and pions. To check this, pressure scans were made at diaphragm apertures at 2.0mm or less. The separation increases with smaller apertures but the CEDAR efficiency decreases, so the goal is to find an optimal setting that balances separation with efficiency. Figure 4 shows a pressure scan with 1.7 mm diaphragm aperture, which gives good separation with only 2.5% loss of efficiency. 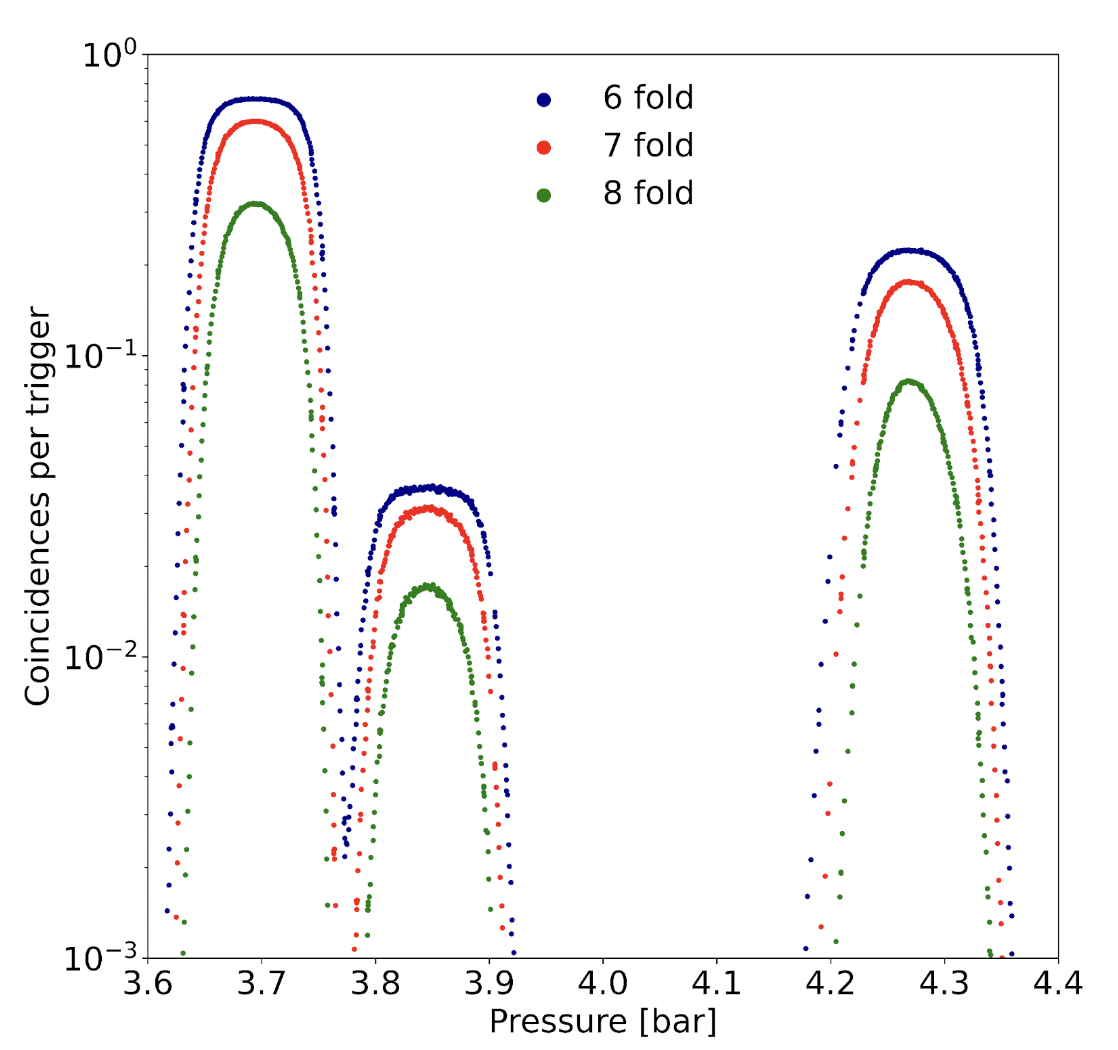 Figure 4: Pressure scan taken with a diaphragm aperture of 1.7mm, showing acceptable separation of the pion (left) and kaon (centre) peaks while losing only 2.5% efficiency.

In October/November 2022 a new CEDAR detector for the NA62 experiment, using Hydrogen as the Cherenkov radiator, was tested for the first time. Thanks to the excellent collaboration between NA62 and several CERN groups, the beam-test was a success. The CEDAR was aligned to the H6 beam, and several pressure scans at different aperture settings were collected. Detailed analysis of the data is ongoing.

The CEDAR-H project was successful as a result of excellent collaboration between NA62 and several CERN groups. We would like to acknowledge the contribution of: BE-EA, who took over the responsibility of substantiating the new detector and bringing it to an installation-readiness level; SY-BI-PM, who helped developing a laser-based alignment protocol; SY-BI-XEI, who were responsible for the control and acquisition of the system and handled the integration with the CERN controls system; EP-DT-FS, who took care of the gas control system; EP-DT-EF, who provided advice and support optical coatings; EN-MME, who provided support at the early conception stages as well as throughout the project with the procurement and assembly of mechanical components; HSE-OHS, who provided expert assistance in assessing how to reduce health and safety hazards linked to operation with hydrogen; HSE-FRS, who supported the preparation of emergency preparedness and response procedures; EN-EL-EWS and EN-AA, who helped in the development and implementation of the control interlock strategy; BE-CEM, for reverse engineering and setting up the original alignment control system; EP-DI-SO and BE-ASR-SU, who helped with all administrative safety procedures; and BE-ICS, for the implementation of the software controls of the gas system.