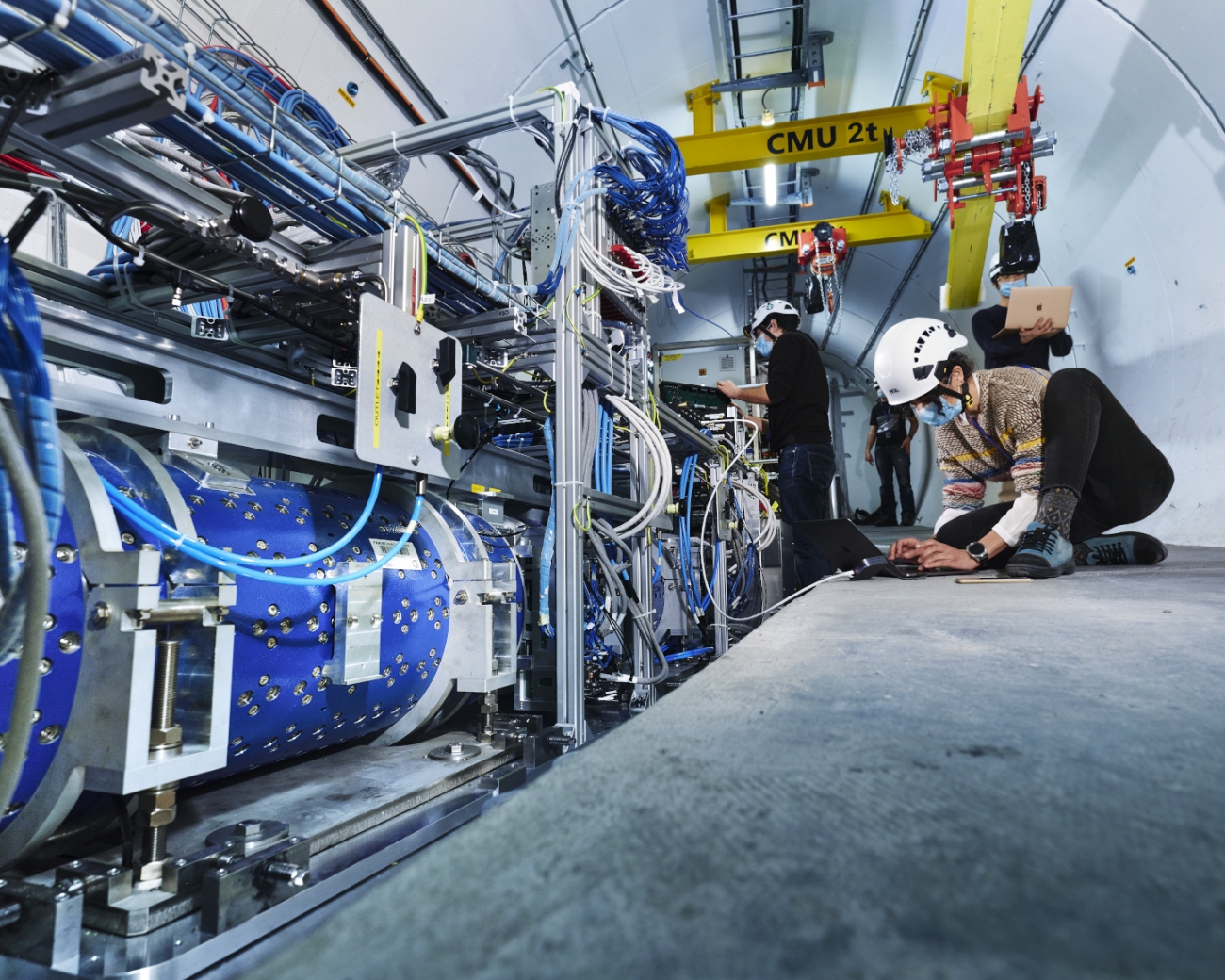 The ForwArd Search ExpeRiment (FASER) is searching for new light and weakly interacting particles decaying into charged final states at the LHC [1][2]. While the first physics data taking has just started an upgrade is already foreseen to enhance the sensitivity also to Long-Lived Particles (LLP) decaying into photons: the installation in FASER of a new high-granularity pre-shower detector was recently approved by the CERN Research Board, to further extend the search for new physics during the last year of Run 3 of the LHC program and beyond [3]. The new pre-shower will be able to identify 2 very closely spaced high energy photons (with a separation of >200 μm), which is the detector signature for light new particles decaying to photons inside FASER.

Figure 1 shows how the new detector will fit in FASER in the 280 mm space between the last tracker plane and the calorimeter. The new pre-shower is designed with the strict requirement of not exceeding the available resources on the experiment site in terms of power supply, cooling power and data bandwidth. This requirement and the use of a modular design will allow for a drop-in installation during the winter break of 2023. Once installed, the readout of the pre-shower will be integrated with the rest of FASER and the information from the tracking station, the new pre-shower and the calorimeter will be combined to fully reconstruct the final state of any LLP decay.

Figure 1: Layout of the FASER detector highlighting the current trigger and preshower station (with no XY granularity) and its future replacement with the upgraded version.

The detector will be made of six layers of tungsten absorber alternated with planes of monolithic silicon pixel sensors. Each plane will consist of 12 modules of 3×2 detector ASICs mounted on an aluminum cooling plate, covering an area of 13.4×17.5 cm2. The thickness of the tungsten plates adds 6 radiation lengths to guarantee high efficiency for the photons to convert and for the development of the electromagnetic shower. Figure 2 shows the exploded view of the new pre-shower. This layout will provide the transversal and longitudinal granularity needed for high-efficiency two-photon detection while maximizing the rejection of backgrounds. Figure 3 shows a simulation example of EM shower initiated by two 1 TeV photons with 500 μm separation, as seen by the monolithic detector ASICs. To sample the electromagnetic showers initiated by O(1TeV) energy photons and individually reconstruct their cores at distances as small as 200 μm, the pixel ASIC will operate as a high-granularity, large dynamic range imaging sensor. 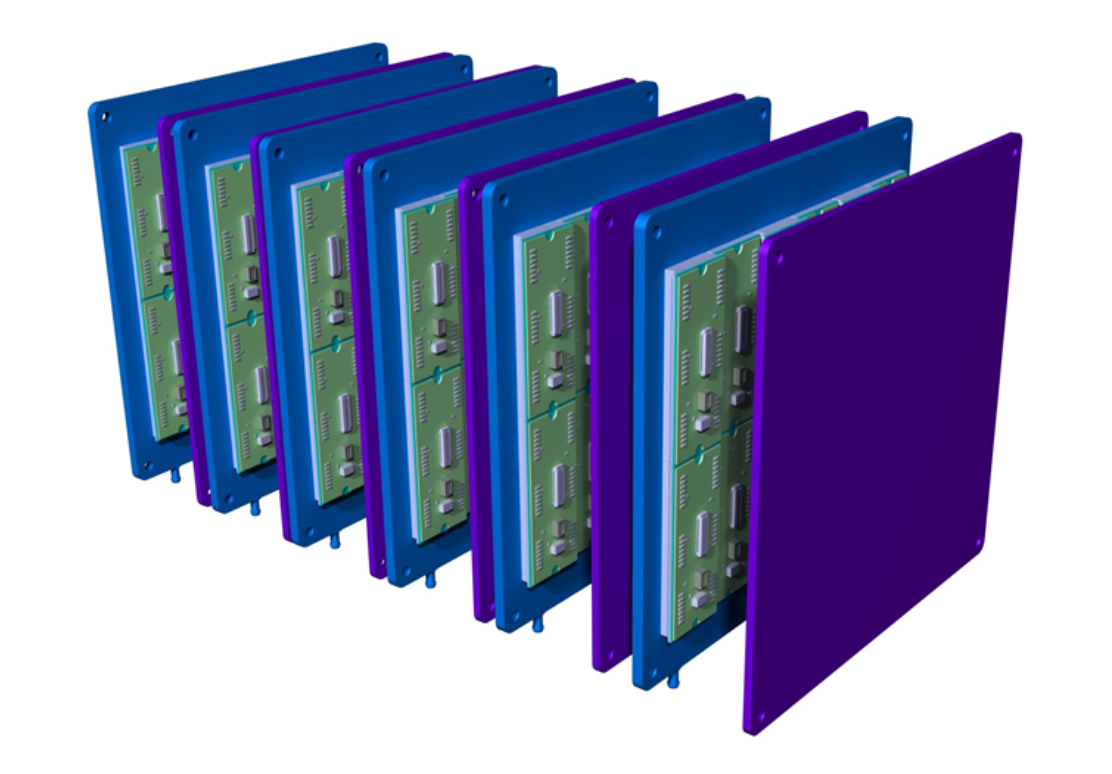 Figure 2: Exploded view of the new pre-shower. In purple: the tungsten plates used to convert the photons. In blue: The aluminum cooling plates, on top of which the modules with the monolithic pixel detector ASIC are installed. 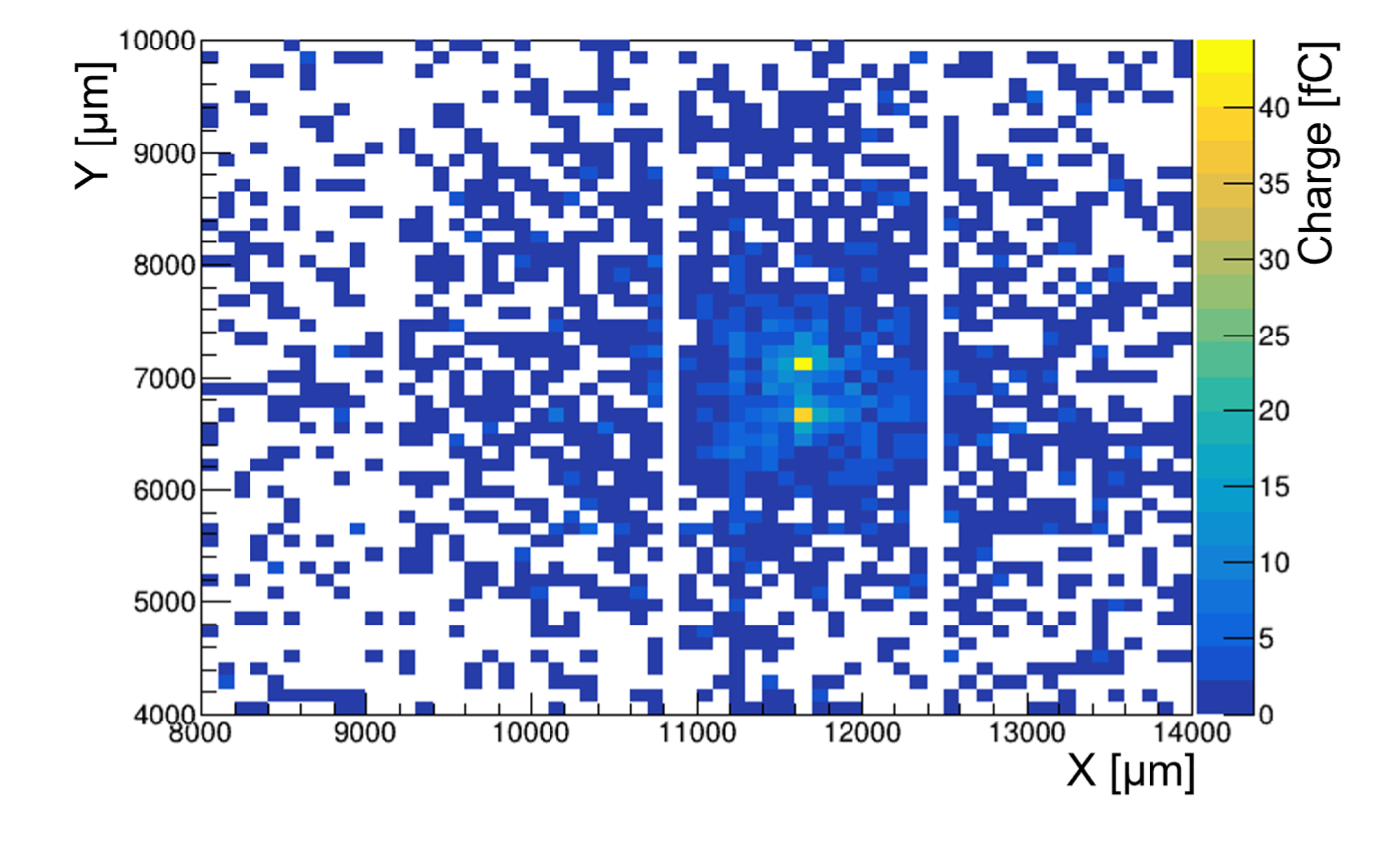 Figure 3: Simulation of the expected charge distribution in the detector ASIC from two electromagnetic showers initiated by 1 TeV photons with 500 μm separation. The large charge deposition in a single pixel from the shower core requires a large dynamic range for the charge readout of the monolithic detector ASIC. Geant4 + AllPix2 simulation.

The monolithic detector ASIC, designed in collaboration between the University of Geneva, CERN and Karlsruhe Institute for Technology, will be produced in 130 nm SiGe BiCMOS by IHP Microelectronics. Figure 4 shows the layout of the chip, which will have an area of 2.2×1.5 cm2, containing a matrix of 208×128 hexagonal pixels of 65 μm side divided in 13 super-columns, each with its own readout logic. The front-end electronics, integrated in pixel and based on SiGe Heterojunction Bipolar Transistors, will provide a time resolution better than 200 ps at low power consumption and a charge measurement ranging from 0.5 to 64 fC. The frame-based readout will use a clock speed of 200 MHz to guarantee an efficient detection of the electromagnetic showers with a muon background rate at the HL-LHC of 1.5 Hz/cm2. Prototypes from a pre-production run were submitted in 2021 and comprise three versions of the ASIC with variations of the front-end design and readout scheme. These prototypes are presently under test by the FASER collaboration, with the final chip submission foreseen for October 2022. 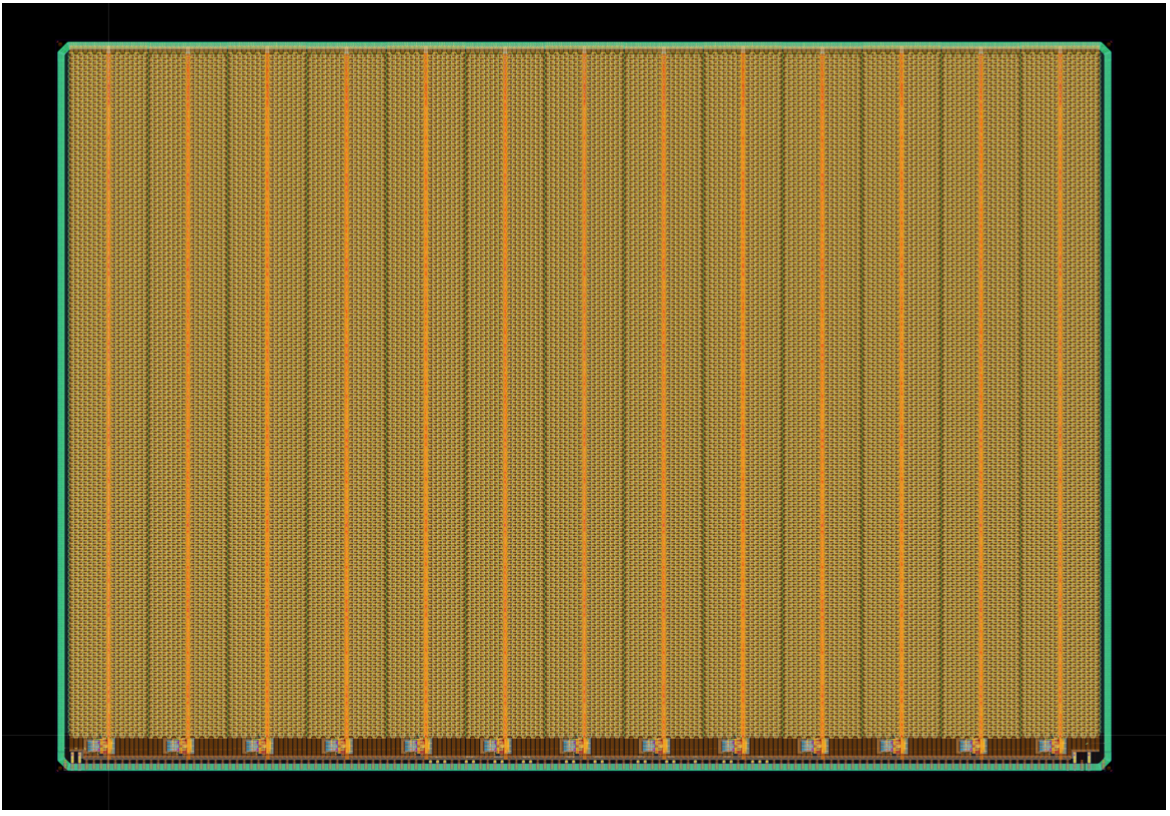 Figure 4: Layout of the monolithic detector ASIC. The design will be submitted for production in October, after completion of the test from the pre-production prototypes.

The efficiency of the new pre-shower in distinguishing two photons has been estimated to be above 95% for a photon separation as small as 200 μm using Geant4 Monte Carlo simulations. The development of more advanced reconstruction algorithms is still in progress, but with the present results it is possible to predict the potential for discovery in selected new physics channels. To characterise the performance of the preshower detector, a model of an Axion Like Particle (ALP) which couples to the field strength tensor of the SU(2)L gauge group via L ∼ gaWWaWW was used. After electroweak symmetry breaking, the ALP (a) acquires couplings to all the electroweak gauge bosons, for example W-bosons and photons. The coupling to W-bosons allows for an abundant production at the LHC, via loop induced decays such as b → sa. Due to the high mass of the other weak gauge bosons, it exclusively decays into photons, making it an ideal benchmark scenario for this study. The study, based on events generated with the FORESEE numerical package [4], focused on the (ma, gaWW ̃) parameter space (0.10 GeV < ma < 0.48 GeV and 8.2 × 10−6 GeV−1 < gaWW < 4.3 × 10−4 GeV−1) not yet excluded by experiments. Figure 5 shows the result of this study. The curves for FASER correspond to the observation of at least 3 signal events. The result indicates that the expected performance of the pre-shower are close to the ideal case for a detector with perfect resolution.

The main background expected for ALPs and all the new physics channels involving a neutral final state of the LLP comes from the large flux of neutrinos coming from the ATLAS interaction point. Despite the small volume of the new pre-shower, the mass of the tungsten absorber will be approximately 9.5 kg, for which around 100 neutrino interactions are expected during the last year of LHC Run 3 (assuming an integrated luminosity of 90 fb-1). The high-granularity of the new detector will be fundamental to discriminate the ultra-collimated, parallel showers originating from photon conversions from the jets emitted at large angle by neutrino DIS interactions. 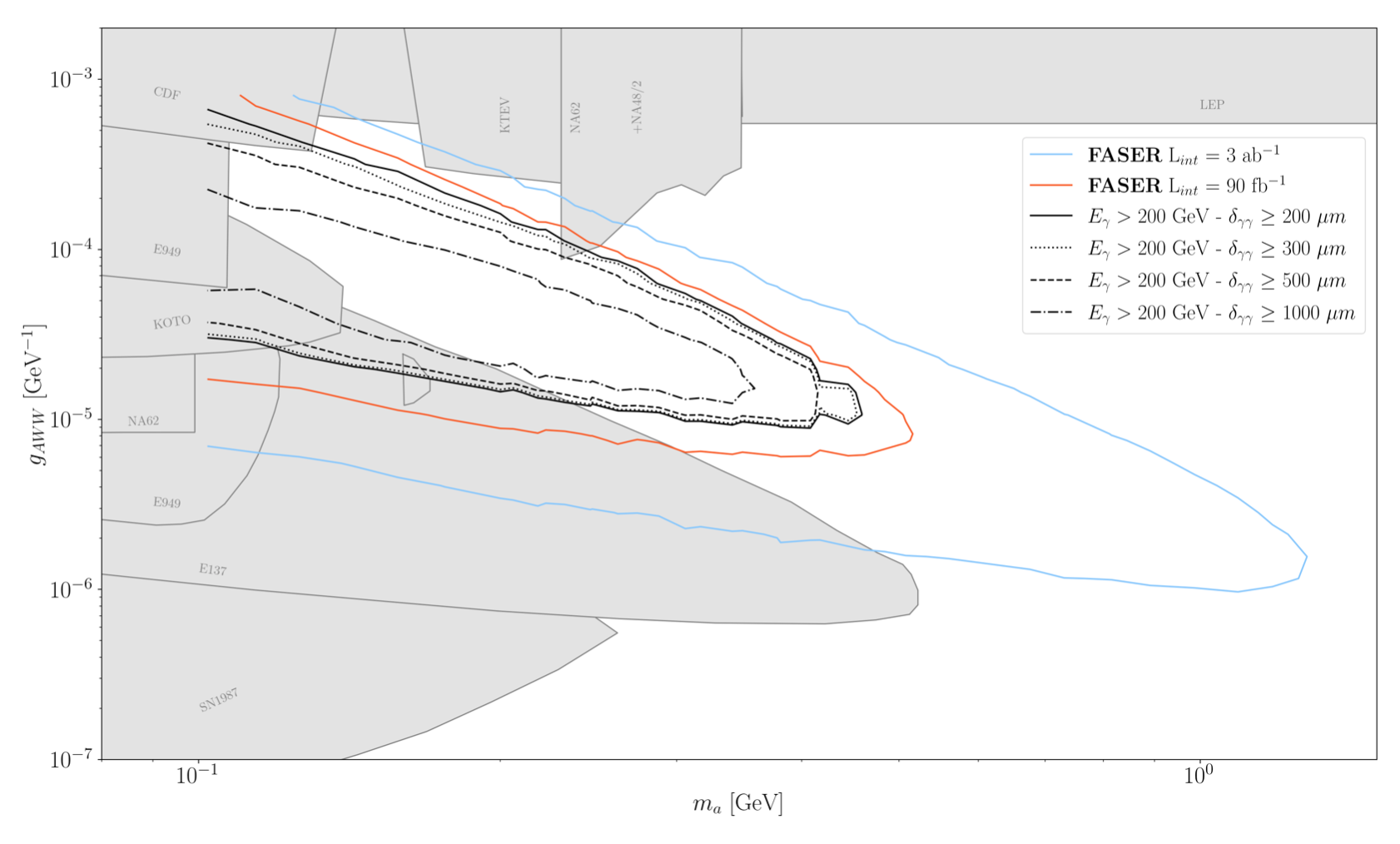 Figure 5: Sensitivity reach of the FASER W-Si preshower in the ALP parameter space. The blue and red lines show the reach for an ideal detector with 100% photon-pair reconstruction efficiency for the Run-3 (90 fb−1) and HL-LHC (3 ab−1) expected integrated luminosities for 14 TeV collision energy. The black lines show the sensitivity reach for 90 fb−1 of data including simulated efficiencies for photon-pairs with Eγ > 200 GeV and various values of δγγ. The grey-shaded regions represents the parameter space currently excluded by experiment [5][6].

Beyond the case for ALP, other possible searches enabled by the new pre-shower are all the models involving LLPs that can decay into final states containing neutral pions, which then decay into two photons, like in V → γπ0 → 3γ. A prominent example is a light dark scalar boson [7], which decays into two neutral pions. Another example is a sterile neutrino N decaying via N → νπ0 [8]. The upgraded FASER will be also able to study more in detail models in which an LLP decays into two charged pions and a neutral pion. Finally, it will increase its sensitivity in the case of charged final state, thanks to the redundant measurement of the charged particles at the end of the tracking stations.

The LHC and the HL-LHC programs offer a unique opportunity to search for dark matter at the high-intensity frontier. FASER was the first experiment purposely designed to investigate the production at the LHC of low-mass Long Lived Particles (LLP) decaying into two leptons, thus extending the LHC physics program. Thanks to the recent FASERν upgrade [9] and to the new pre-shower, the discovery potential of FASER will be extended further, making of it the first general purpose experiment at the intensity frontier at the LHC.

Acknowledgements: The development and construction of the W-Si pre-shower of the FASER experiment was funded by the Swiss National Science Foundation (SNSF) under the FLARE grant 20FL21- 201474 at the University of Geneva. Additional financial contributions from KEK, Kyushu University, Mainz University, Tsinghua University and the Heising-Simons Foundation are also acknowledged.