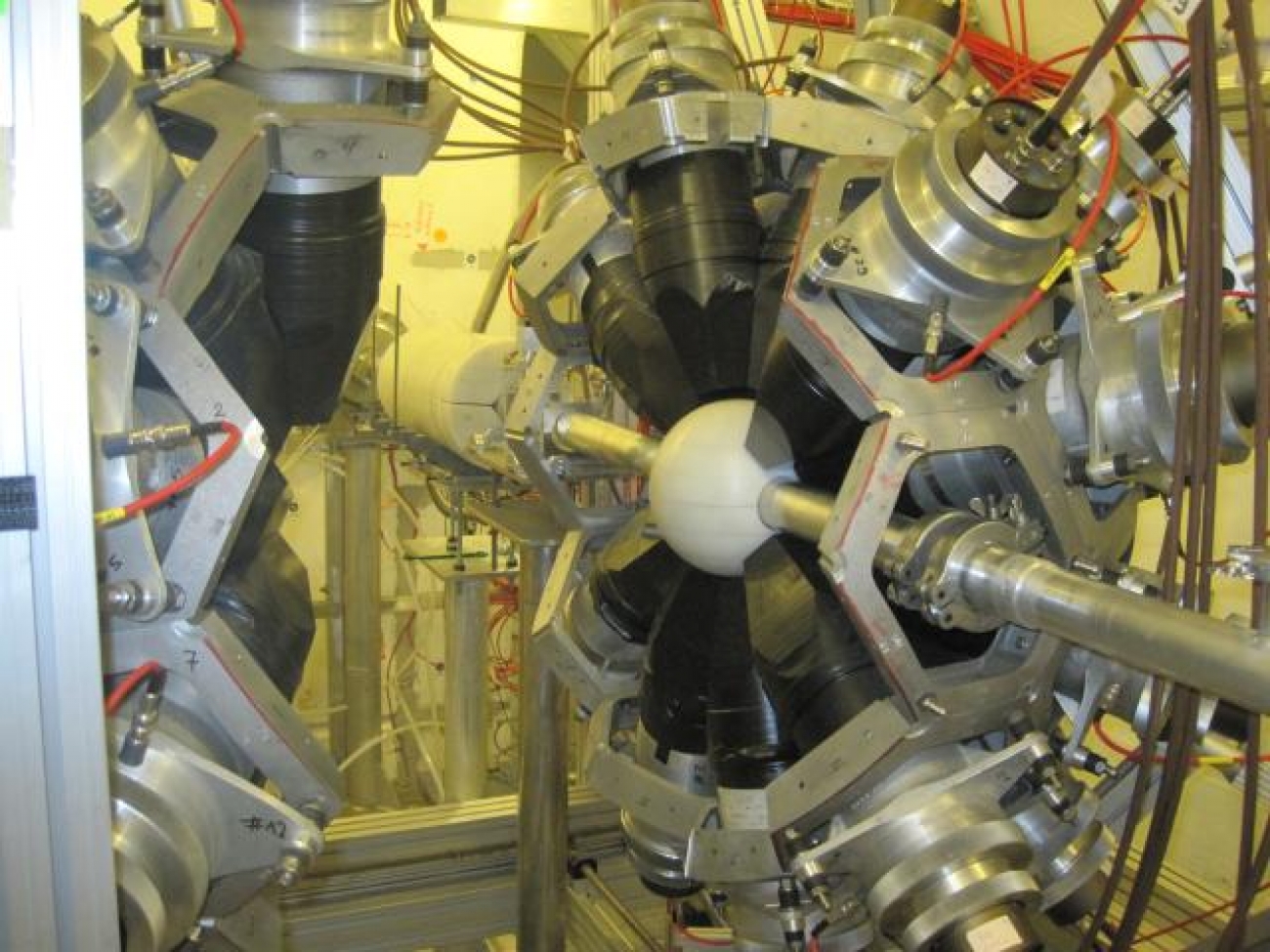 Following the installation of the new spallation target during LS2 and the successful commissioning during the 2021 run [1,2], the n_TOF Collaboration started in March, this year, an intense experimental programme for all three experimental areas of the facility.

The 2022 run at n_TOF started with two challenging measurements: (n,γ) reaction cross sections on Se-79 and Nb-94. These two isotopes are both radioactive, with half-lives of 3.25 x 105 and 2.03 x 104 years, respectively. One of the challenges in neutron induced reaction experiments is to separate the prompt γ-rays emitted in the reaction, from the radiation emitted by the radioactive decay of the sample under investigation. Nevertheless, at n_TOF it is possible to measure neutron induced reaction cross sections on radioactive samples, due to the extremely high instantaneous neutron flux generated by the intense 20 GeV/c proton beam driver from the PS. The high instantaneous neutron flux compresses the time in which the n_TOF detection system acquires signals to a fraction of a second (< 100 ms). Comparable neutron intensities can be reached in other facilities, only by adopting a high repetition frequency of the neutron generation process resulting in higher/increased background signals from the sample radioactivity in reaction cross section measurements.

Figure 1 Neutron capture and beta-decays in the Se-Br-Kr region of the nuclide chart. The relative abundance of the two s-only isotopes Kr-80 and Kr-82 is driven by the efficiency of the s-process branching point at Se-79.

The case of the neutron capture cross section on Se-79 is particularly interesting, as this isotope is a branching-point in the s-process nucleosynthesis [3]. The neutron capture and beta-decay reaction flow of the s-process in the Se-Br-Kr region of the nuclide chart is shown in Figure 1. The capture cross section of Se-79, never measured before, is the key quantity to determine the relative abundance of the s-only isotopes Kr-80 and Kr-82. The data at n_TOF have been taken in both experimental areas EAR1 and EAR2, with two different detection systems. In EAR1, a newly developed γ-ray detector, i-TED [4], based on LaCl3 crystals coupled to avalanche photodiodes (SiPMs) has been used (see Figure 2).

Figure 2 i-TED detector (left) and the IFIC-Valencia n_TOF Team (right) that developed it.

The sample used in the measurement contained only 3 mg of Se-79, the rest being a total of about 4 grams of Pb, Al and Se-78. It was obtained by irradiating PbSe (Lead selenide) at ILL Grenoble and cast into an aluminum case. The 78Se(n,γ)79Se reaction in the PbSe produced the tiny amount of Se-79 which, thanks to the great sensitivity of the beam and detection systems, could be studied for the first time at n_TOF. The outcome of the measurement could be immediately appreciated in the preliminary results, promptly analyzed, that showed the first few capture resonances of the 79Se(n,γ) reaction (Figure 4). From these data, the neutron capture probability, averaged over the energy distribution of neutrons in stars (the MACS, “Maxwellian averaged capture cross section”) will be extracted and used in stellar evolution modeling. 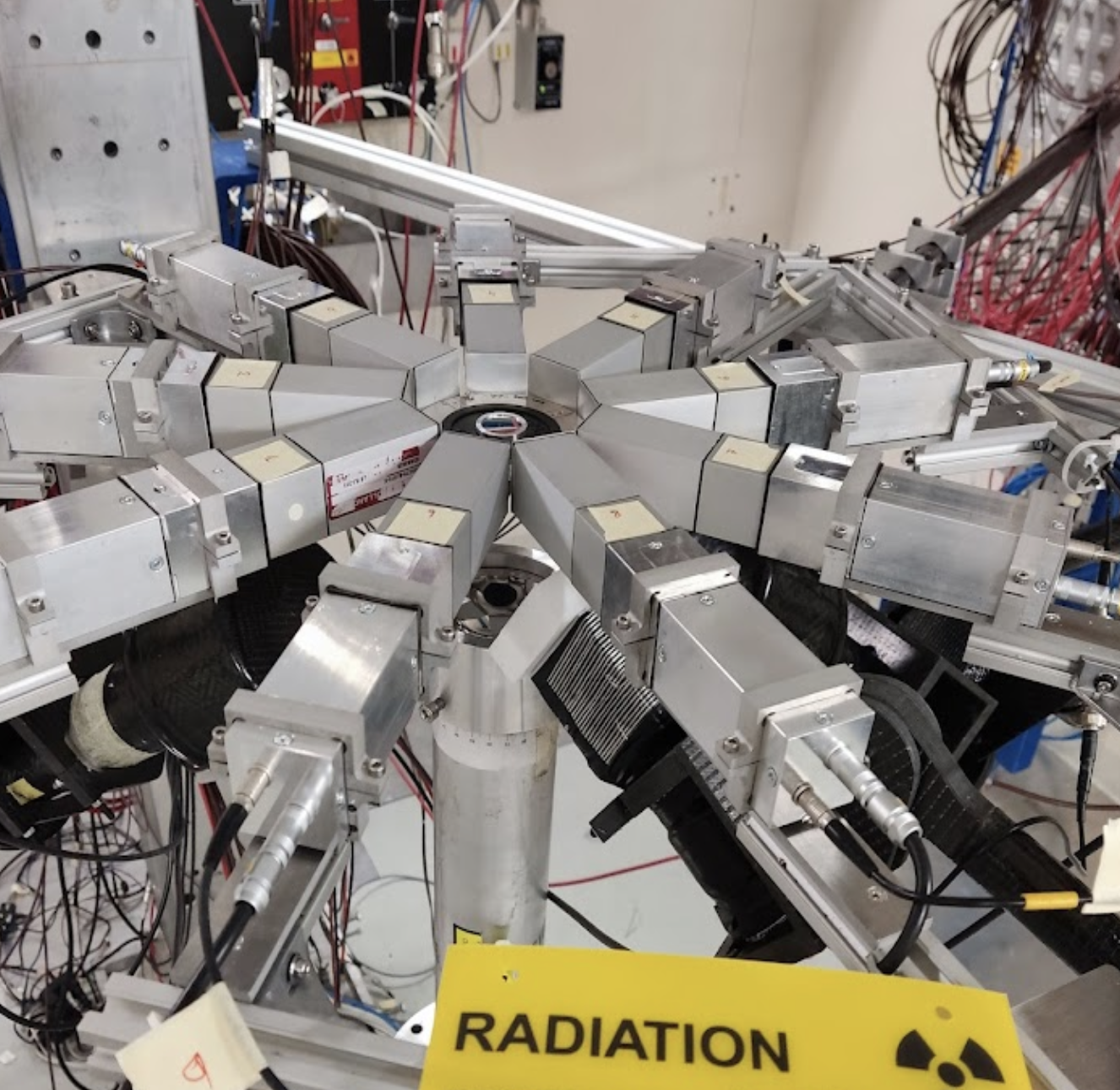 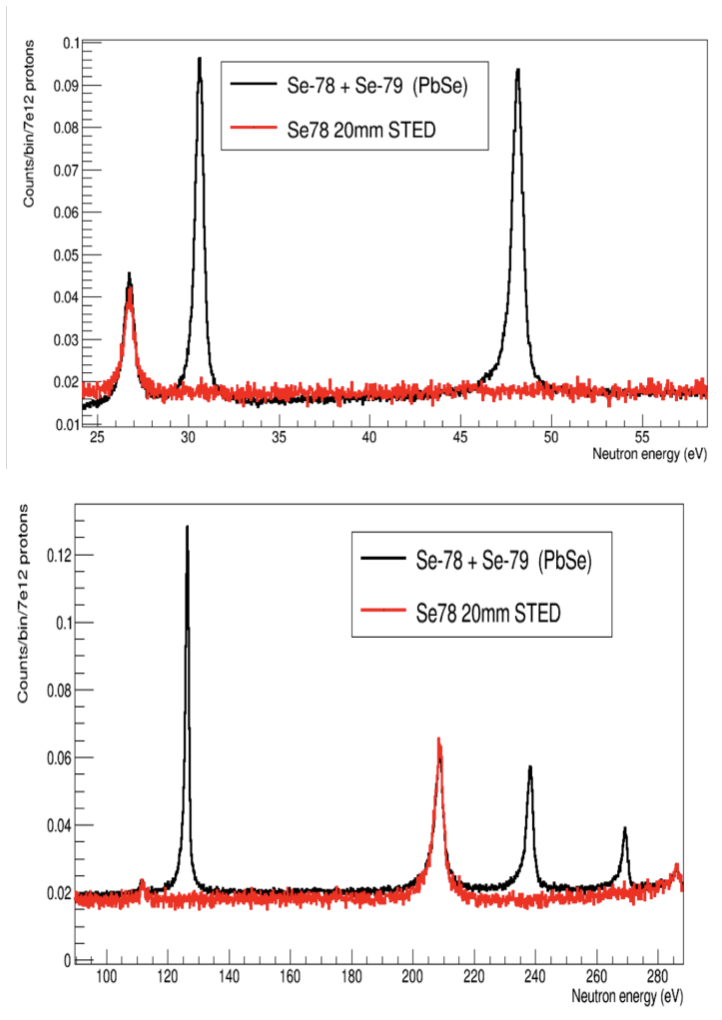 Figure 4 Neutron capture events of the 79Se(n,γ) reaction. In the spectra shown, events due to the 78Se(n,γ)79Se, already known and measured independently, are well separated.

Nb-94 is another s-process branching isotope which drives the relative abundance of the s-only Mo-94 and Mo-96 nuclei. Its neutron capture cross section is therefore again the key quantity for establishing the nucleosynthesis path through the Zr-Nb-Mo region [5]. Nuclei with mass number around A=90 are particularly interesting as they reflect the different nucleosynthesis processes taking place at the “border region” between massive stars (with mass in excess of 4-6 solar masses) and that producing s-process in lower-mass stars, which synthesize all the rest of the s-process elements (the “main component”).

Again, the measurement performed at n_TOF could only rely on about 2 x1019 atoms of Nb-94 (about 3 mg). In this case, the measurement could be performed only in the second experimental area EAR2, with the s-TED detectors (Figure 3). In the case of Nb-94, only the first resonance in the reaction process was previously measured through the neutron transmission method. With the n_TOF measurement, a large fraction of the excitation function could be measured, which will provide a solid experimental assessment of the Nb-94 MACS (Figure 5). 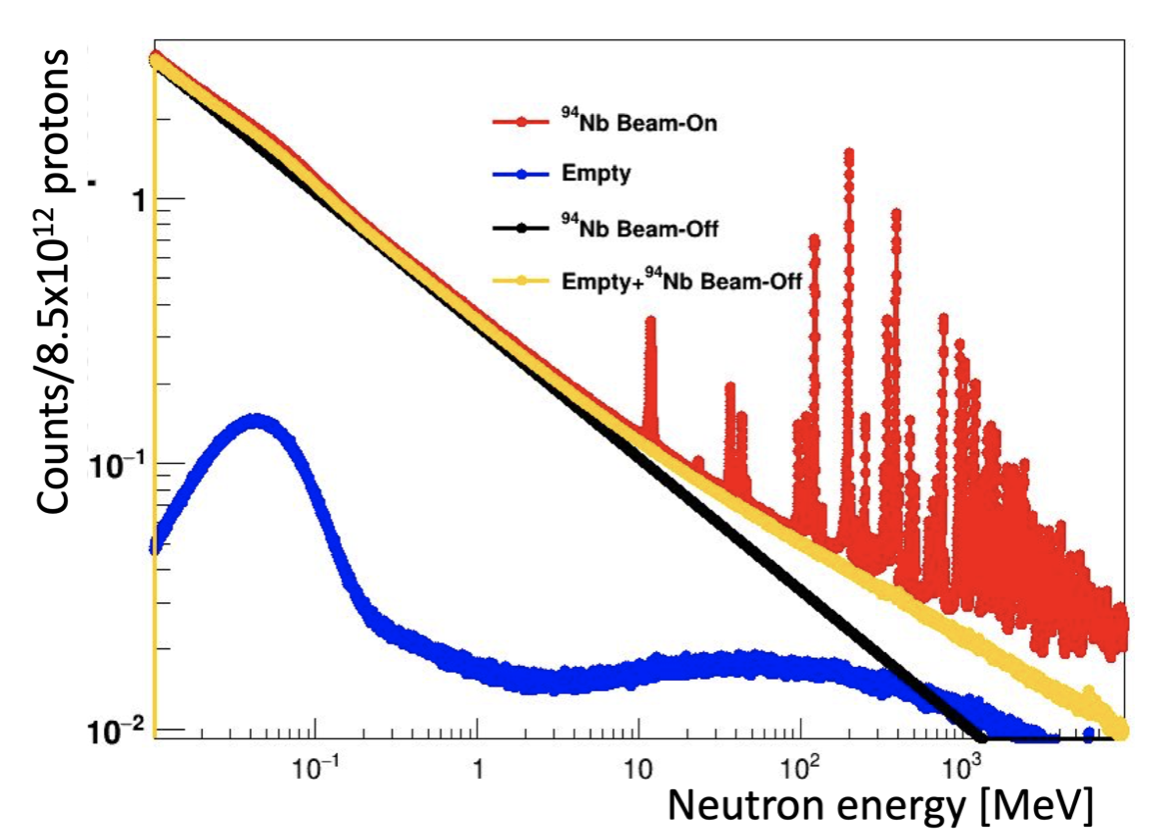 Figure 5 Capture events in the Nb-94 measurement. The different components are shown separately. Note the reduced effect of the radioactivity of the sample (shown in black).

A third experimental activity has been just initiated this year at n_TOF, at the NEAR Station [6] (Figure 6). This third area has been considered for experimental activities by the n_TOF Collaboration, only after LS2, when important consolidation works of the n_TOF target area have been performed. At the NEAR Station, activation measurements can be performed. With a proper adjustment of the neutron spectrum, using filters and a moderator, a MACS can be extracted without the necessity of performing neutron energy dependent excitation function measurements, as always done at EAR1 and EAR2. At the NEAR Station, by taking advantage of the enhanced neutron flux along with the sensitivity and selectivity of the neutron activation technique there is the potential to perform measurements for shorter lived nuclei, on even lower mass material, interesting for nucleosynthesis studies as well as for other applications such as material for fusion studies or medical radioisotopes production. 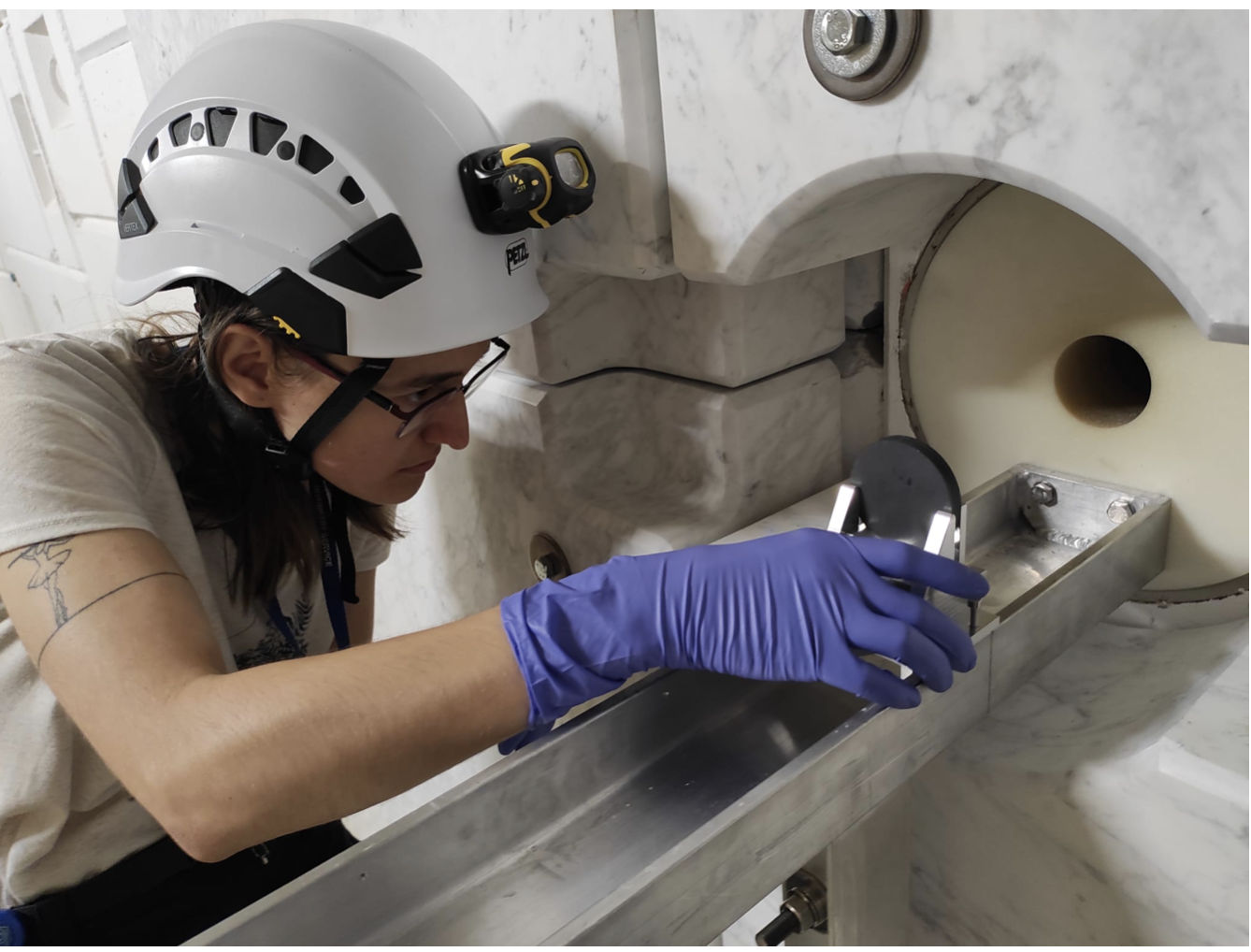 Figure 6 A sample of Ce-140 of a few mg, imbedded in a Boron Carbide filter case, is placed in position for irradiation at the exit of the neutron beam collimator of the n_TOF NEAR Station.

The n_TOF Collaboration, established in the year 2000, presently involves 131 researchers from 32 research institutions, mostly from Europe. It is responsible for all the experimental activities performed at the n_TOF facility, at CERN.