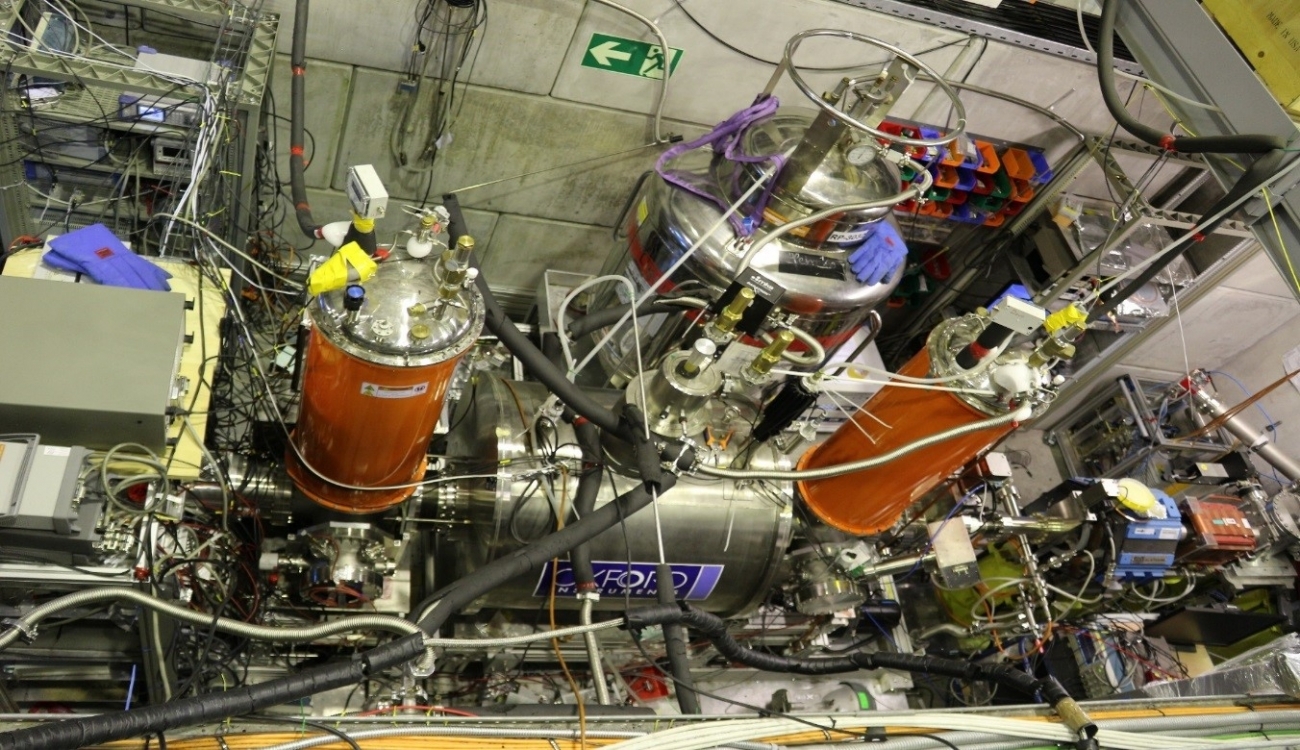 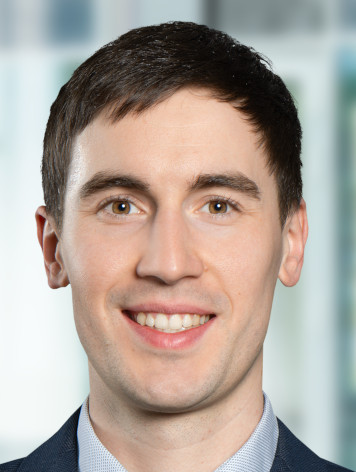 In October, the prestigious Dissertation Prize of the Section Atoms, Molecules, Quantum Optics and Plasmas (SAMOP) of the German Physical Society was awarded to Peter Micke for his seminal work demonstrating quantum logic spectroscopy on highly charged ions (HCI) [1]. He completed his PhD in Piet O. Schmidt's group at the Institute for Experimental Quantum Metrology (QUEST) at Physikalisch-Technische Bundesanstalt (PTB), the national metrology institute of Germany and in José Crespo's group in Thomas Pfeifer's division at Max Planck Institute for Nuclear Physics (MPIK) in Heidelberg.

We discussed with Micke, who has recently joined CERN’s EP Department as a senior research fellow working for the BASE experiment, about this achievement and his next research steps.

Atomic systems have been successfully used for decades in experiments that have reached unprecedented precision, and in particular for timekeeping. Atomic clocks are among the most accurate instruments ever built, achieving a record precision of 10-18. This outstanding precision allows to explore the constancy of fundamental constants, to test Einstein’s theory of relativity, or to search for dark matter in order to refine our standard models of particle physics and cosmology.

Compared to mechanical clocks, atomic clocks employ an electronic transition from one state to another one as their ‘pendulum’. They ‘tick’ at a rate determined by the frequency of light that is emitted or absorbed when an atom changes from one energy state to another. The energy required to make an electron, bound to an atom, change its orbit is unique in each atom and it is consistent throughout the universe. Clocks based on different atoms run at different rates, and the term ‘optical clock’ refers to one that runs at an optical frequency. The achieved relative frequency uncertainties at the level of 10-18 would in principle, allow the clocks to keep time so accurately that they would gain or lose no more than one second over the age of the Universe.

About 15 years ago, the use of highly charged ions (HCI) was proposed to pave the way for a new generation of atomic clocks that could enable more accurate tests of our present theories in physics. As Micke explains: “Crucial for applications of clocks in fundamental physics are, first, a high sensitivity to effects beyond the Standard Model and Einstein’s Theory of Relativity and, second, a low sensitivity to systematic effects that limit the attainable frequency uncertainty. Clocks based on highly charged ions offer both”. He continues: “These two advantages of highly charged ions over neutral or singly charged atoms are a consequence of their high positive charge which makes the remaining electrons bind more strongly to the nucleus. The extreme electromagnetic interaction enhances effects from special relativity and quantum electrodynamics. Nuclear properties are also easily accessible as a result of the overlap of the compact electronic wave function with the nucleus.  Narrow, highly forbidden optical transitions can be found for instance in the stretched fine- or hyperfine structure.” These considerations motivated the effort to combine optical atomic clocks with HCI whose optical transitions could previously ‘only’ be studied at a much lower precision of a level of a bit better than 10-6.

Over more than six years, Peter Micke and the teams from MPIK and PTB worked hard to put these ideas in motion and built this novel instrument that would render the first optical clock based on highly charged ions possible.  To succeed, a number of technological challenges had to be overcome. As Micke explains: “The experiment combines two home-built ion traps, an electron beam ion trap to produce the HCI and a cryogenic Paul Trap in which the spectroscopy is performed. Key for this was, that our team was made up of experts coming from both fields: optical atomic clocks and highly charged ions.” Then he emphasizes: “ However, the main challenge was to get everything working together and to implement so-called quantum logic spectroscopy. This advanced technique allows us to map elusive spectroscopic information after laser excitation of the HCI onto a second, singly charged ion. From there, we can read the information out in a binary way. Importantly, this second ion also allows for laser cooling of the two-ion crystal down to the quantum-mechanical ground state of motion as a preceding prerequisite. We thereby obtained the coldest HCI ever observed. These methods stem from the toolboxes which are used in quantum information processing and quantum computing.

Following this novel approach, the team was able to resolve the electric-dipole forbidden fine-structure transition of Ar13+ at 441 nm with a fractional frequency uncertainty of 3 × 10−15. Micke notes: “This was an improvement by eight orders of magnitude over the previous standard technique using a grating spectrometer, and it is not the limit for highly charged ions. Since our experimental approach is universal, the entire atomic class of highly charged ions is now basically unlocked for applications in cutting-edge frequency metrology.” 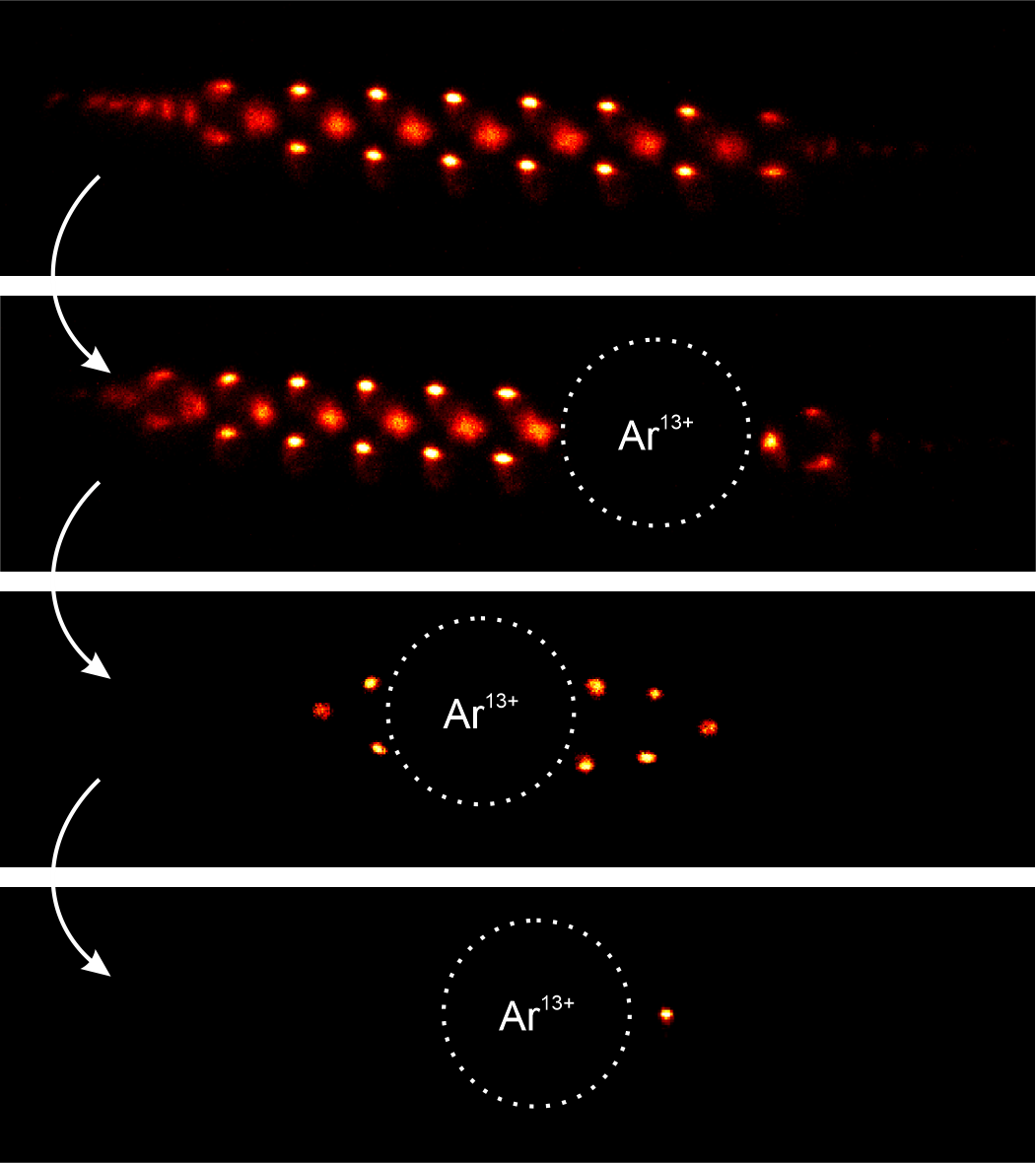 Photographs of the two-ion crystal preparation. A highly charged Ar13+ ion (dark void) is captured in a laser-cooled Be+ ion crystal. Each bright spot corresponds to a fluorescing Be+. Then, singly charged ions are heated out until the Ar13+ - Be+ two-ion crystal is obtained. Finally, the quantum logic spectroscopy sequence can start.

The demonstrated precision may still be lower than the one achieved by the best optical atomic clocks, but as Micke explains, the limitation comes from the intrinsic linewidth of the Ar13+ clock transition that was used in the experiment and not from the approach per se. Micke explains “The reason why Ar13+ was used is simple: It has one of the best studied and most accurately known optical transitions in any highly charged ion. Therefore, it was the ideal candidate to demonstrate the capability of our new approach.” He adds “Future runs, using different HCI species with narrower clock transitions should further boost the precision and could eventually allow to compete with the most accurate optical atomic clocks”. An improvement of precision by 8 orders of magnitude is remarkable and the choice of HCI with their high sensitivity for searches for BSM physics could unlock a new set of high-precision experiments.

Micke is now working at the BASE experiment at CERN to study the fundamental properties of the antiproton and the proton. When we asked him if his work marks a continuation he replies “There are other fascinating and inspiring systems as well for which quantum logic spectroscopy is a very promising approach to boost precision. The BASE collaboration indeed is progressing rapidly towards quantum logic spectroscopy inspired schemes for proton and antiproton magnetic moment measurements [2]. Much work has already been done in this direction and very recently BASE reported on the first sympathetic cooling of protons mediated by a superconducting LC resonator [3], which is an important milestone towards antimatter measurements at further improved precision”.