R&D on gas usage in the LHC particle detection systems. 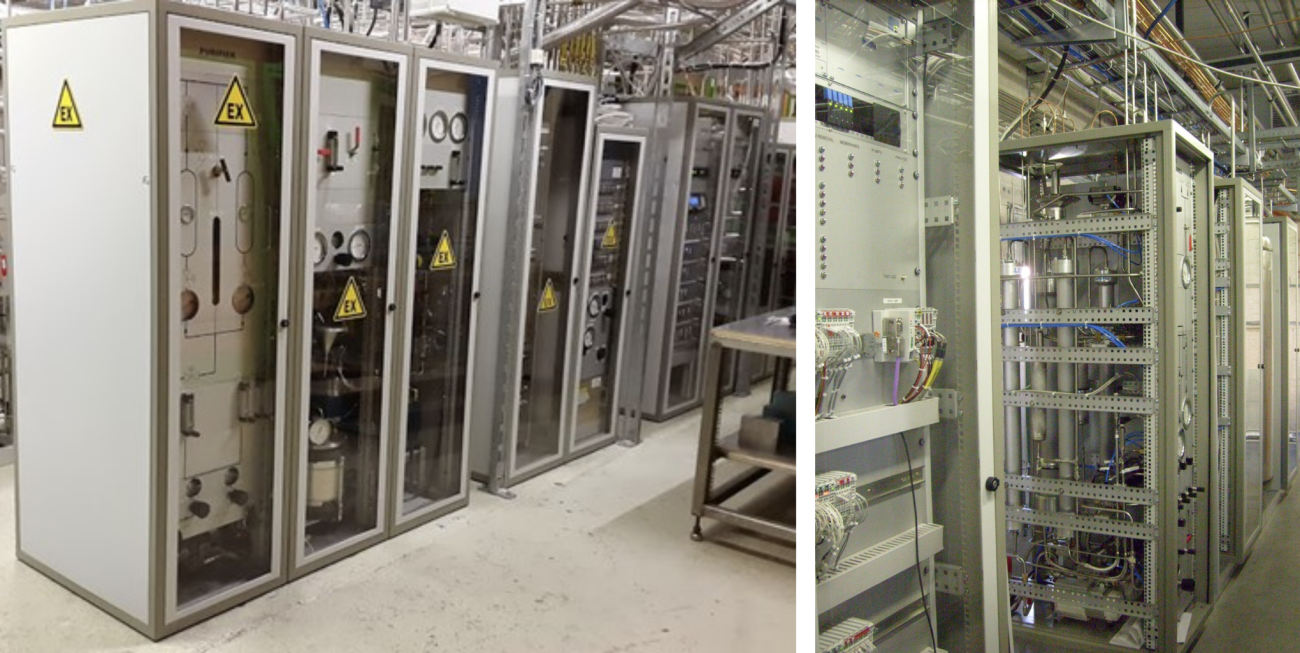 A wide range of gas mixtures is used for the operation of different gaseous detectors for particle physics research. Among them there are greenhouse gases like C2H2F4 (R134a), CF4 (R14), C4F10 (R610) and SF6, which are needed because they allow to achieve specific detector performance required for data taking at the LHC experiments (i.e., long term stability, time resolution, rate capability, etc.). With the aim of reducing the greenhouse gas usage and of preparing the very long-term operation, during the past years the CERN Environmental Protection Steering board (CEPS), the LHC experiments and the EP-DT Gas Team have elaborated a strategy based on several action lines. The LHC Long Shutdown 2 period allowed important upgrades in this direction to be finalized.

Since the beginning of the operation, all detectors using GHGs were equipped with gas recirculation plants, i.e., systems where the return mixture from the detectors is collected, cleaned, and then re-used. This already allows the gas usage to be reduced by more than 90%. In addition, the first identified research line focuses the attention on the optimization of current technologies, allowing the flow and pressure stability to be improved beyond the original requirements to cope with the needs of new detectors.

The ATLAS-RPC gas system distribution was upgraded from 5 to 9 modules allowing a better equalization of the pressure inside the detector. For the CMS-RPC gas system, 28 new regulation valves with custom-made seats were installed in the gas system distribution modules to minimize pressure fluctuations (< 0.1-0.2 mbar) and for an easier operation during gas transition phases. Concerning the non-LHC experiments, the NA61-TOF detector (using a R134a based mixture) gas system was re-built into a recirculation plant.

Concerning the CMS-CSC CF4 recuperation plant, R&D studies allowed to improve the recuperation efficiency of up to about 60% which is beyond the original design. From 2021 the CSC gas system was always operated using a fraction of recuperated CF4 together with new CF4. In addition to a reduction of the CF4 emissions, the recuperation system allowed to mitigate effects due to CF4 shortage.

A new recuperation plant was designed, built, installed and operated for the LHCb-RICH2 detector. The new system allowed a reduction of the CF4 emissions by about 65% during the detector re-filling after LS2 in view or Run3 operation, and it will further reduce the CF4 usage during the run.

R&D studies are also ongoing for the design of a R134a recuperation plant. Indeed, R134a represents the major contribution to the gas consumption for particle detection at CERN. Figure 1 shows a picture and a schematic view of the modified prototype. The recuperation process is more complicated than expected because R134a and iC4H10 form an azeotropic mixture, i.e., a mixture that cannot be separated by simple distillation. Several tests performed with an input RPC gas mixture flow from 100 to 600 l/h confirmed the good quality of the recuperated R134a. The overall recuperation efficiency was about 80%. The construction of a second prototype for continuous operation and re-use of recuperated R134a is now under construction. Installation and commissioning are expected by the end of the year-beginning 2023.

Figure 1: On the left, a schematic view of the first R134a recuperation prototype system. On the right, a view of the system installed in the CMS surface gas building. Cold separation modules, compressor and analysis modules are visible.

The third research line is based on the long-term replacement of currently used gases for the operation of gaseous detectors. An intense R&D activity is already ongoing since many years in the detector community, in order to find more environmentally-friendly replacements for R134a, SF6 and CF4. Thanks to the re-start of the SPS beam lines in the CERN North Area, in 2021 it was possible to test RPC performance in presence of muon beam and high gamma background rate at the CERN Gamma Irradiation Facility (GIF++) (Figure 2). 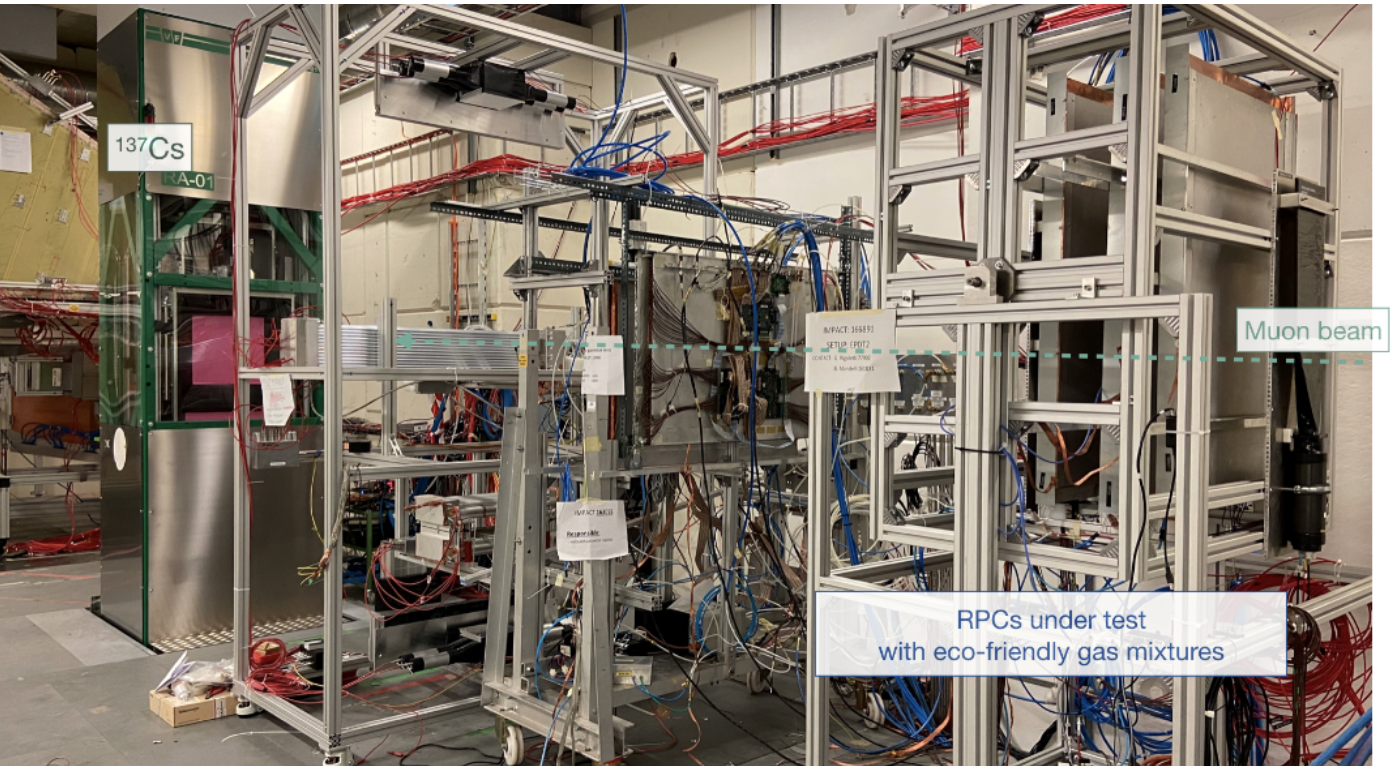 Figure 2: Picture of the RPC detectors (on the right) installed at the CERN GIF++ Facility for beam test and long-term aging operation.

Several eco-friendly gas mixtures, previously studied and validated in laboratory conditions with cosmic muons, were tested for RPCs up to up to gamma rate of 600 Hz/cm2, similar to the expected background rates of HL-LHC in ATLAS and CMS barrel regions. The main goal was to evaluate detector efficiency and currents with respect to the RPC standard gas mixture. Figure 3a) shows the efficiency and streamer probability curves for the most relevant gas mixtures tested in presence of muon beam only, while Figure 3b) shows the currents drawn by the RPC, evaluated at detector working point as a function of the gamma background rates at GIF++. The addition of up to 30-40% of CO2 or He to the standard gas mixture reveals detector performance comparable to the standard gas mixture, indicating a possible mid-term solution to reduce GHG emissions. Further studies are still needed to evaluate long-term performance. To further lower the GWP, a fraction of C2H2F4 has been replaced with HFO1234ze (GWP 1). In this case, the currents are higher with respect to the standard LHC RPC gas mixture and a greater efficiency drop is visible with the increase of the gamma rate. 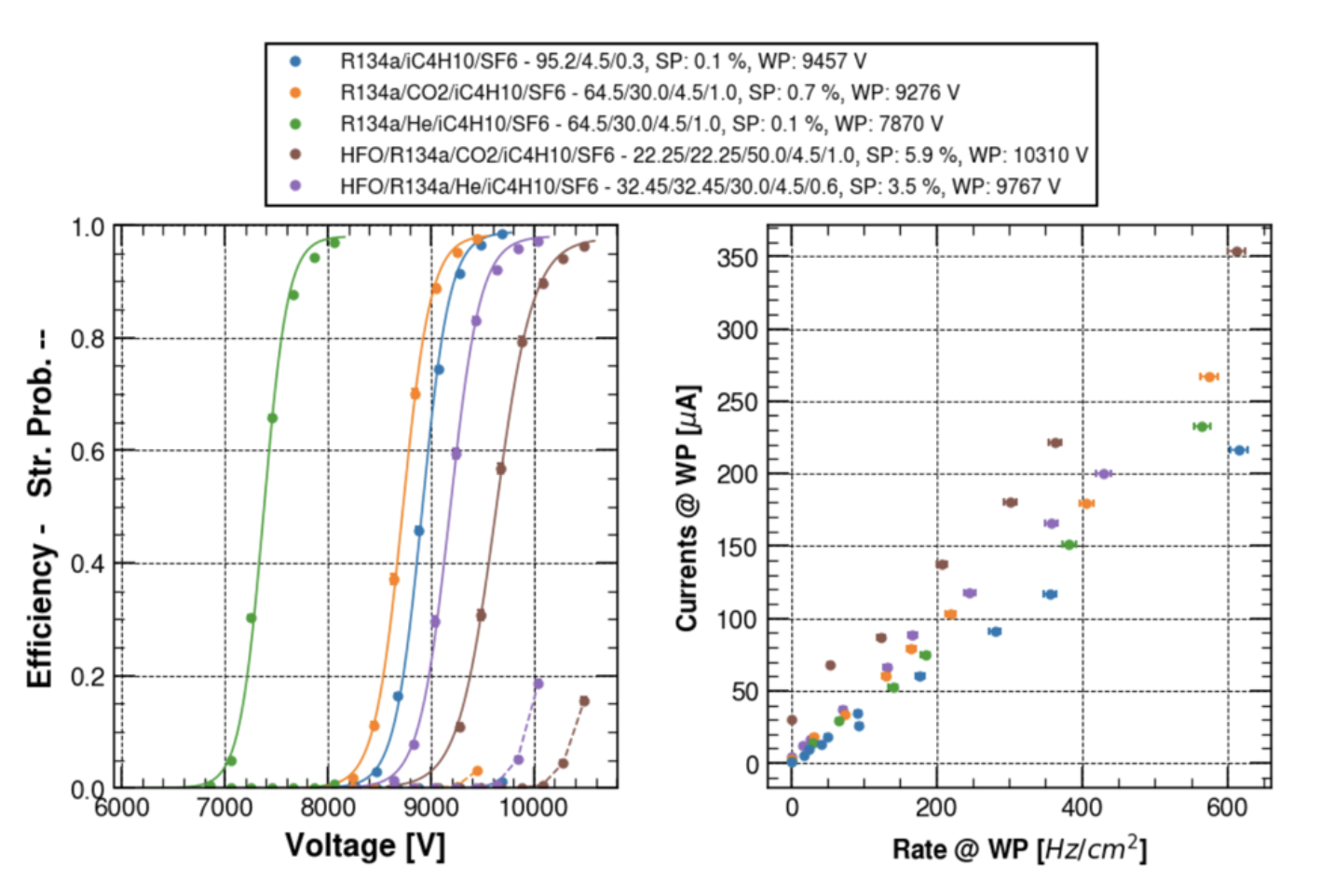 Figure 3: a) Efficiency (continuous line) and streamer probability (dashed line) in presence of muon beam and b) currents as a function of different gamma background rates for RPC operated with standard gas mixture and selected eco-friendly gas mixtures.

In the RPC detector gas mixture, SF6 contributes about ∼8% to the GHG emission due to its high GWP (22800), despite its typically low concentration of about 0.3%. Several SF6 replacements were tested to evaluate their effects on RPC performance. Figure 4 shows the best efficiency and streamer probability curves obtained. Very good streamer probabilities have been obtained with two Novec gases (Novec 5110 and Novec 4710). However, the sensitivity of these gases to UV radiation and to presence of water vapor must be evaluated. Outside the Novec family, C4F8O and CF3I have been tested: good results have been obtained but neither gas satisfies all necessary requirements. The AMOLEA HFO1224yd in the same concentration as the SF6 has a streamer probability of about a factor 2 higher, so it could also be considered a good candidate. However, a final satisfactory solution is still far from being achieved and further studies are needed.

For future RPC applications where high voltage systems and detectors can be designed without specific constraints, preliminary results obtained with only HFO based mixture are also promising. A large collaboration (ECOGAS@GIF++) has started between the detector communities of different experiments (both LHC experiments and non-LHC experiments) for the studies of eco-friendly gas mixtures for RPC detectors operated at different background conditions, and for their long-term operation.

Figure 4: Streamer probability and detector currents for different tested SF6 substitutes, compared to the R134a based standard mixture (Std in the plots).

The different strategies described above should be combined to achieve the highest possible reduction of GHGs emissions as well as operational costs and minimizing potential problems due to availability.

On October 12th and 13th a workshop on CERN and Environment (https://indico.cern.ch/event/1193771/ ) was held at CERN with the aim of giving a wide overview of the CERN’s environment strategy and endeavours to achieve the Laboratory’s key objectives: to reduce its impact on the environment; to reduce energy consumption and increase energy reuse; and to develop technologies that will enable society to preserve the environment.