Scrutinising cosmic antimatter production with an innovative use of LHCb 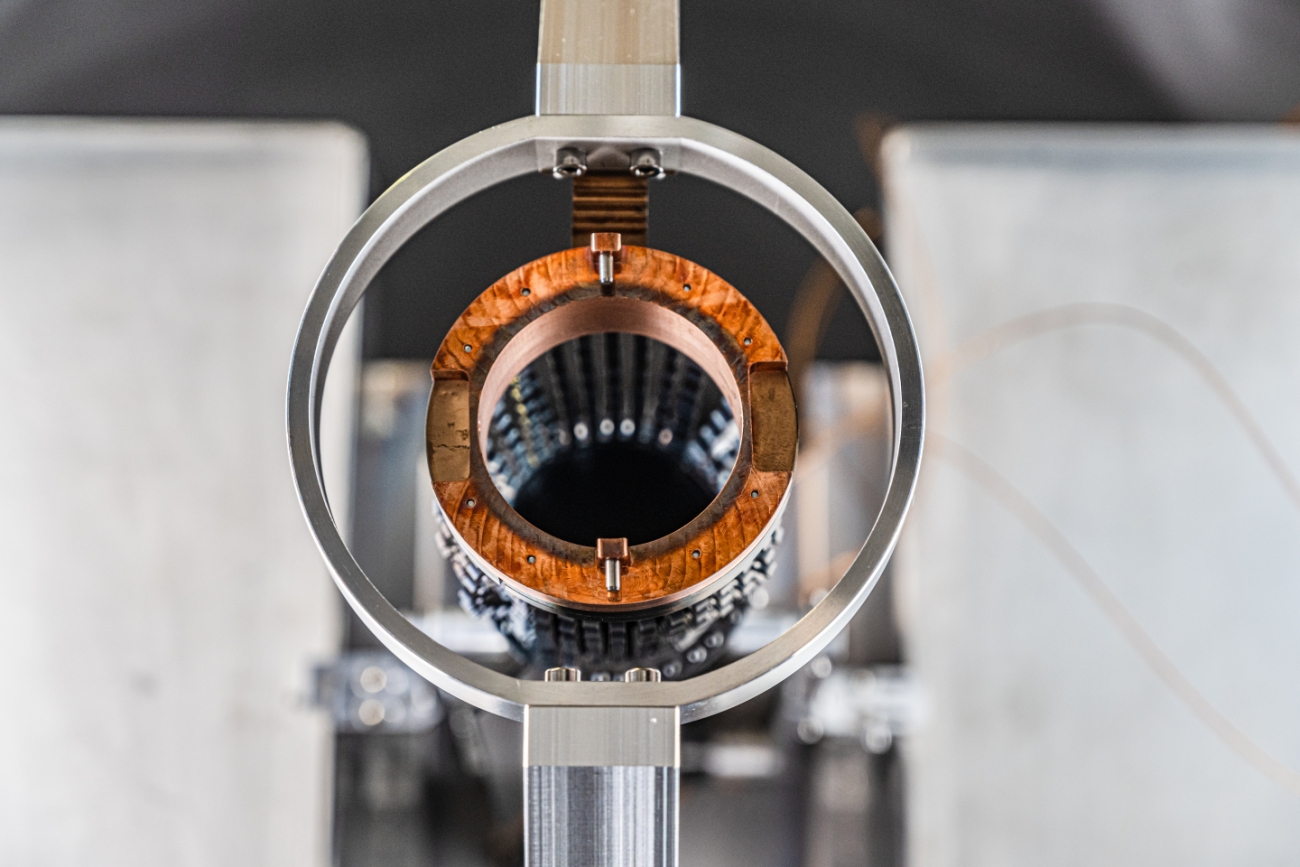 “The real prize is finding something new out there” is one of the most famous citations by Vera Rubin, the scientist who around 1975 firstly observed the anomalous rotation curves of spiral galaxies, providing evidence for the possible existence of dark matter (DM). Since then, many physicists around the world have attempted to win this prize, but the nature of DM and its interactions remain today among the great mysteries of modern physics.

Nowadays, one of the most promising indirect search strategies for DM is being pursued by particle physics experiments in space, such as PAMELA and AMS-02, looking for antimatter produced by a DM decay or annihilation process. The searched signature is an excess of the antimatter flux over the small expected production in known processes, namely collisions between primary cosmic rays and the interstellar medium. In 2008, the unexpected observation by the PAMELA experiment of a strong rise with energy of the positron-to-electron ratio in cosmic rays aroused great interest, though the same effect was not observed in the antiproton-to-proton ratio as would be expected from a DM annihilation signal. If astrophysical sources like pulsars are a plausible explanation for the positron excess, they are not expected to provide a significant contribution to the production of antinuclei. In 2015, more precise antiproton data were released by the AMS-02 experiment on the International Space Station.

The antiproton-to-proton flux ratio, about 10-4, was measured with a few percent accuracy up to a kinetic energy of 300 GeV. The results above 10 GeV indicated that the ratio was not decreasing with energy as predicted for secondary-only antiproton production (see Figure 1) and prompted another wave of excitement. Unfortunately, the limited precision of the secondary antiproton flux prediction prevented any firm conclusion from being drawn. The largest source of uncertainty was attributed to the knowledge of the antiproton production cross-section in cosmic collisions, mostly involving hydrogen and helium nuclei. Models for these cross-sections relied on a limited set of measurements, mostly in proton-proton (pp) fixed-target collisions with a maximum projectile energy of 450 GeV, corresponding to a nucleon-nucleon centre-of-mass energy √ sNN= 29 GeV. Collisions of higher energy still contribute to the fluxes measured by AMS-02, and the energy evolution of the cross-sections cannot be accurately predicted, as Feynman scaling is  known to be significantly broken at this scale. Moreover, no data  from collisions involving helium nuclei were available. New data to better constrain the secondary cosmic antiproton production were eagerly needed. 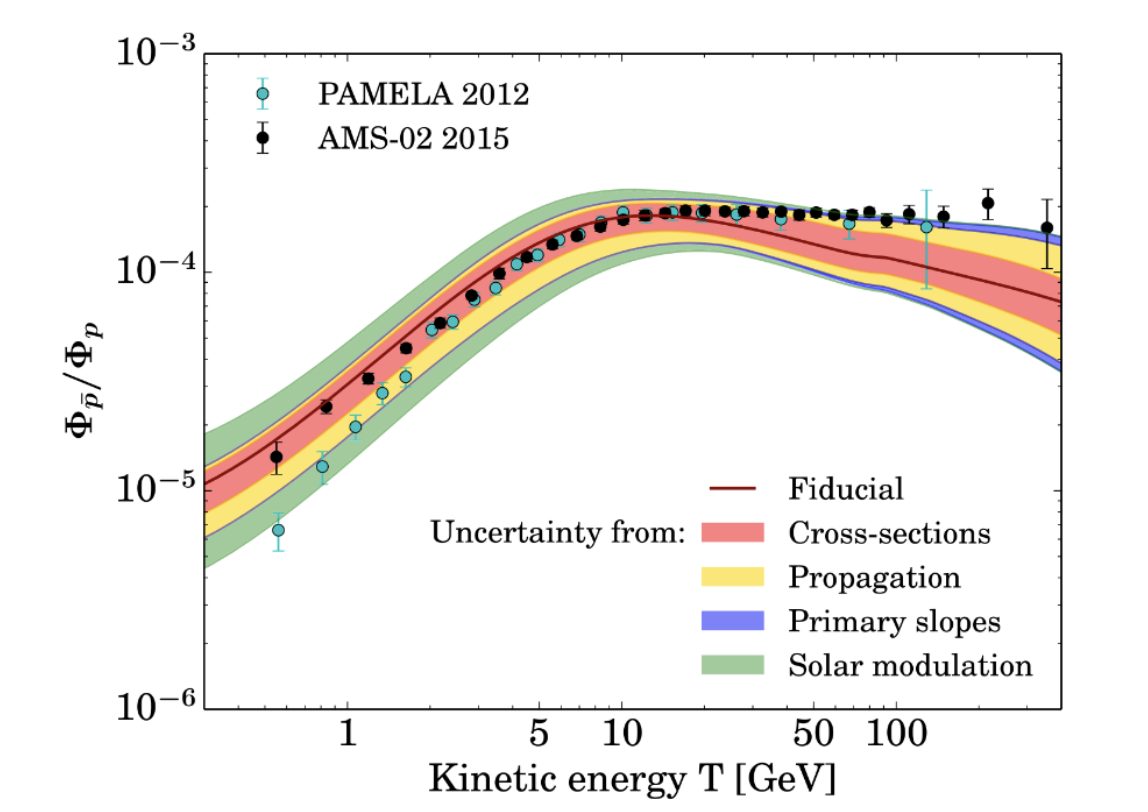 Figure 1: Measurement of the antiproton-to-proton flux ratio in cosmic rays as a function of the kinetic energy by the PAMELA and AMS-02 experiments. The data are compared to a 2015 prediction for a secondary antiproton production only and a hint for an excess above 10 GeV was observed. The uncertainty affecting the model, with its components separately highlighted, prevented a definitive conclusion from being drawn. Plot from Giesen et al.

Meanwhile, the LHCb experiment developed an unforeseen and creative use of its detector. Originally conceived for heavy flavour physics in proton-proton collisions at the LHC, the LHCb detector is implemented as a forward spectrometer covering the pseudorapidity region 2 < η < 5. Thanks to this fixed-target-like geometry, collisions between the LHC beams and the residual gas of the machine could be precisely reconstructed, resulting in a precise imaging of the beam transverse profiles. To increase the rate of these beam-gas collisions, a System for Measuring Overlap with Gas (SMOG) has been operated since 2011 to inject tiny quantities of noble gases in the LHC beam-pipe. Thanks to this beam imaging technique, the luminosity of the pp collisions in LHCb during the LHC Run 1 was measured with 1.2% accuracy, the smallest among  LHC experiments. And it was soon realised that SMOG offered much more: thanks to its excellent tracking and particle identification performance in the forward direction, LHCb could be operated as the highest-energy fixed-target experiment ever.

Prompted by the astroparticle community and the fresh AMS-02 results, the LHCb physicists started in 2015 to inject helium through SMOG, recording pHe collisions with proton beams of 6500 GeV energy (√ s=110 GeV), thus reproducing cosmic collisions at unprecedented energy and in a previously unprobed collision system. In 2018, a first measurement of antiproton production was published. Unexpectedly, LHC and LHCb had joined the effort to search for dark matter in cosmic rays!

This first measurement addressed the “prompt” antiprotons produced directly in the collision or in strong decays of excited hadron states. Results provided a key input to predict the energy evolution of the cross section and the updated models for secondary antiproton production showed a better agreement with the AMS-02 data. Still, model uncertainties continue to be larger than the AMS-02 experimental precision and to be limited by cross-section knowledge. One of the largest residual uncertainties is related to the significant contribution of “detached” antiprotons produced in weak decays of antihyperons. In LHCb, these can occur metres away from the collision point, but a relevant fraction can be observed within the LHCb vertex detector, where the antiproton trajectory can be measured with the best precision. The analysis of this detached antiproton component in the same pHe collision sample used for the prompt measurement has been recently finalised and submitted for publication. Sources of detached antiprotons are the Λ →pπ+ and the Σ→ p π0 decays,the Λ  and Σ baryons being produced promptly or in decays of heavier anti-hyperon states such as Ξ+,Ξ0 and Ω+. Two complementary approaches, illustrated in Figure 2, are followed.

Figure 2: Approaches to the measurement of the ratio of antiproton production from antihyperon decays to prompt processes.

A first approach focuses on the process producing about 75% of detached antiprotons, Λ →pπ+ decays with the Λ particles produced promptly. As the decay is fully reconstructed, signal candidates are selected by only exploiting the decay kinematics, without the need to use information from the two Ring Imaging CHerenkov (RICH)  detectors, which provide antiproton identification in LHCb. In the second approach, an inclusive measurement of all detached antiprotons is performed, relying on their impact parameter with respect to the reconstructed collision vertex and without aiming at reconstructing the secondary decay vertex. In this case, a tight requirement on the particle identification provided by the RICHs is applied to select antiprotons. The distribution of the χ2IP variable, taking into account the impact parameter and the precision of its measurement, is presented in Figure 3 for the whole pHe data sample. Three peaks, mainly corresponding to prompt, detached and antiprotons produced in secondary collisions with the detector material, can be clearly distinguished. 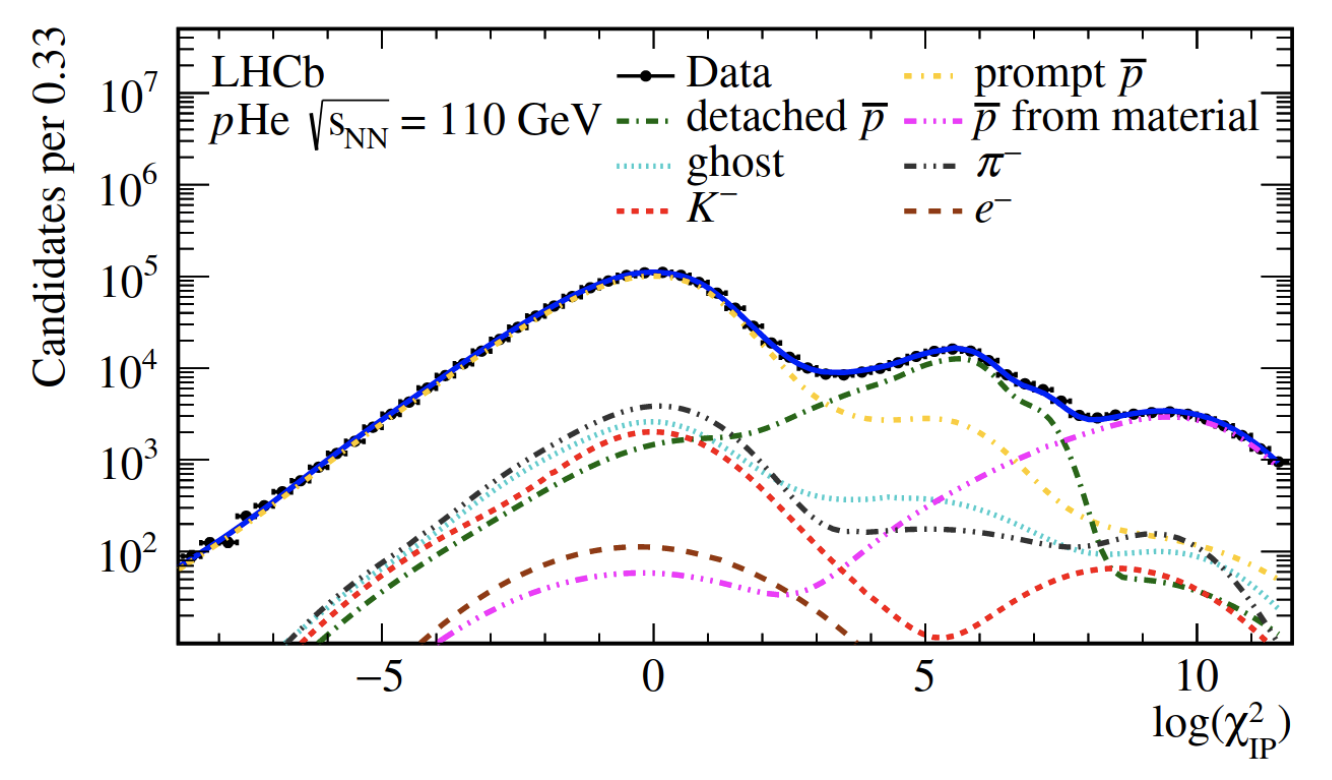 Figure 3: Distribution of the χ2IP variable for the reconstructed and selected antiproton candidates in the pHe data sample. A fit with the composition of templates obtained from simulation for all antiproton and background components is performed to count the number of prompt and detached antiprotons.

The two measurements are performed in two-dimensional momentum-transverse momentum bins within the kinematic region accessible to LHCb: 12 < p < 110 GeV/c, 0.4 < pT < 4 GeV/c, η < 5. The results are illustrated in Figure 4, projected onto the momentum or transverse momentum axes and compared to the predictions from the most commonly used models in cosmic ray physics. In both cases, a large underestimation by all models is found. 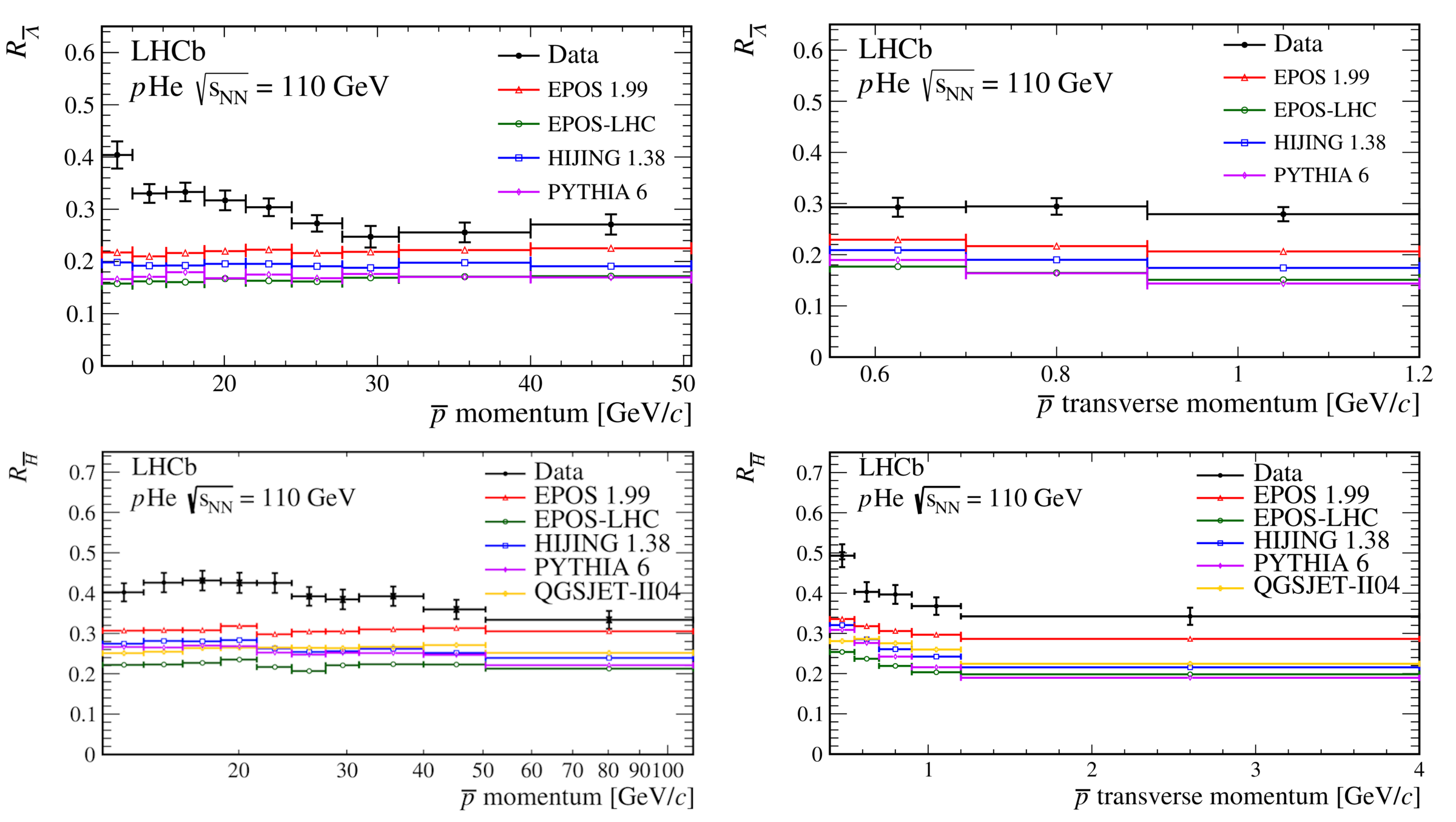 Figure 4: Results for the measurement of the RΛ (top) and RH (bottom) ratios as a function of the momentum (left) and transverse momentum (right) in the kinematic region accessible to LHCb. In both cases, the results are found to be underestimated by widely used hadron production models.

The two measured ratios are also mutually cross-checked by verifying that their ratio is in good agreement with the model prediction, as illustrated in Figure 5. As the relative production of different hyperon states can be predicted with 10-20% accuracy from first principles in statistical hadronization models, this double ratio is expected to be predicted more reliably than the absolute hyperon production yields.

Figure 5: Fraction of the antiproton production in Λ over all anti-hyperon decays, obtained as the ratio of the results of the two approaches to the measurement. The results are found in agreement with the prediction by the EPOS-LHC theoretical model.

Models of secondary cosmic antiproton production are expected to profit from the accuracy of these measurements, covering for the first time the √ sNN  ~ 100 GeV energy scale where the antihyperon production is observed to be significantly enhanced with respect to previous fixed-target experiments.

And this is not the end of the story. Within the major upgrade implemented by the LHCb experiment for the ongoing LHC Run 3, a new fixed-target system is also being developed: the SMOG2 project. The gas target will be confined into a storage cell with 1 cm diameter and 20 cm length,  located upstream of the LHCb nominal interaction point. This will result in an increased gas target areal density, up to two orders of magnitude for the same gas flow used in Run2, and possibly a wider choice of injectable gases. The possibility to inject hydrogen and deuterium is particularly interesting for the antiproton production studies. By comparing pp and pn collisions,  isospin-breaking effects in antiproton production can be precisely measured, also constraining the difference between antineutron and antiproton production. The data which could be collected with SMOG2 with the three collision systems  (pH, pD, pHe) and at different collision energy (possibly from the beam injection energy of 450 GeV up to 6800 GeV) are expected to eventually dismiss the relevance of cross-section uncertainty in the cosmic secondary antiproton flux prediction. And with DM cosmic search turning more and more into a high-precision science, Vera Rubin’s prize could not be too far to be reached.