The idea of the Curious Cryogenic Fish dates back to 2017. While observing the complex detectors and instrumentation being assembled for the ProtoDUNE experiments at the CERN Neutrino Platform, I started thinking that it would have been great to have a small robot able to move inside those large cryostats for visual inspections and maybe even repairs.

I shared those thoughts with a few colleagues who met them with a well-balanced mixture of raised eyebrows, forced smiles and unconditional enthusiasm. It was obvious that transforming this idea into reality would be a daunting enterprise, requiring a vast expertise beyond my own skills. I organized some informal discussions with cryogenic experts from the TE CryoLab, mechanics, electronics and control experts from EP-DT and of course colleagues from the Neutrino Platform, with the aim of laying out the list of main issues that needed to be solved in order to at least assess the feasibility of the idea.

A few months later the European Commission launched the EU-funded H2020 ATTRACT initiative to fund R&D on innovative ideas in the domain of detection and imaging. This offered the perfect opportunity to dedicate some work on advancing the required feasibility studies: we applied for and obtained a grant…. And this is how the Curious Cryogenic Fish (CCF) project, a collaboration between CERN and Danieli Telerobot Labs (DTLABS), was born.

The CCF project aims at developing a diagnostic robotic device to carry out inspections (and at a later stage effect repairs) in large cryostats. It integrates the functionalities and performance of a diagnostic station with the flexibility of an autonomous, remotely controlled vehicle.

While the idea originates from the particle physics domain, it has many potential applications, particularly in the field of liquid gases transport, as well as cryogenic plant supervision. Such a device would allow operating inside the cryostats without emptying them, thus avoiding the high cost of putting them out of service over certain time periods. Similarly, an advantage of using a robot is that it could spot micro-fissures (through bubble formation), thus indicating the need for repairs before any major contamination of the liquid or, in the worst case, macroscopic mechanical failures.

The scope of the CCF project, in the framework of ATTRACT, was to study the feasibility of such a device, as a pre-requisite for a long-term development and industrialization process.

There are many technical challenges for the realization of the CCF:

While several of the points listed above can be addressed with existing technologies, combining these features into a single robotic device has not been previously achieved. The collaboration between CERN (Experimental Physics and TEchnology departments) and DTLABS was instrumental in identifying the state-of-the-art technologies that may be developed or deployed.

In the following paragraphs we will present some of the studies carried out in the scope of the CCF project, highlighting how R&D often creates spin-offs beyond the initial scope. Liquid Argon (LAr, at  ~87K) was used as the candidate medium for all our studies.

After a literature review, as well as discussion with electronics experts, we decided that the only practical way to use cameras in LAr in the short term was to keep them inside a heated shell. This approach allowed to successfully demonstrate that WiFi data transmission inside a LAr cryostat works reliably and can thus be used for image transfer and for sending commands to the camera and eventually for controlling the position and the motion of the CCF.

The relevance of this result goes beyond the CCF project, as it opens up the possibility of using WiFi data transmission also for physics data produced by the detectors. This avenue is indeed being explored now in the context of the DUNE experiment. In parallel, we searched for industrial and academic partners who might be able to explore the development of electronics working directly at cryogenic temperatures: this is an interesting avenue to be pursued further, but it required an investment that was outside the scope of ATTRACT Phase 1.

The CCF needs to be able to move in all directions as well as to hover. We were intrigued by the idea of using jet propulsion, which is the propulsion of an object in one direction produced by ejecting a jet of fluid in the opposite direction. While many of the existing technologies considered for the CCF are challenged by the cryogenic environment in which they have to operate, this method of propulsion exploits the cryogenic environment to its advantage: based on the observation that the pressure of a volume of cryogenic liquid near its boiling point increases rapidly with the application of a little heat, this excess pressure can be used to propel the Fish at minimal expense of power. Jet propulsion offers an alternative to thrusters (motors) with the advantage of reducing moving parts which require maintenance.

A substantial amount of effort went into this direction after a very basic successful proof of concept, but we were not able to achieve efficient production of thrust. While we are not yet abandoning this path, we have started experimenting with motors and propellers, as a backup solution. 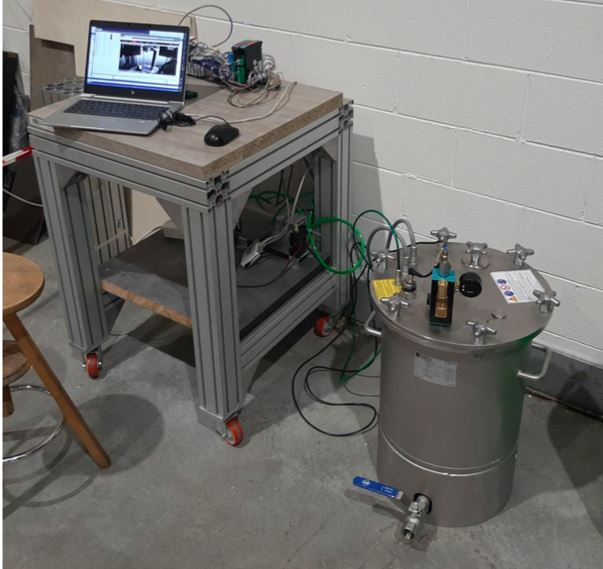 Figure 1 Propulsion setup at DTLABS. Inside the tank a mock-up for the jet propulsion is tested. The generated thrust is measured via a load cell. Picture by F. Becchi. 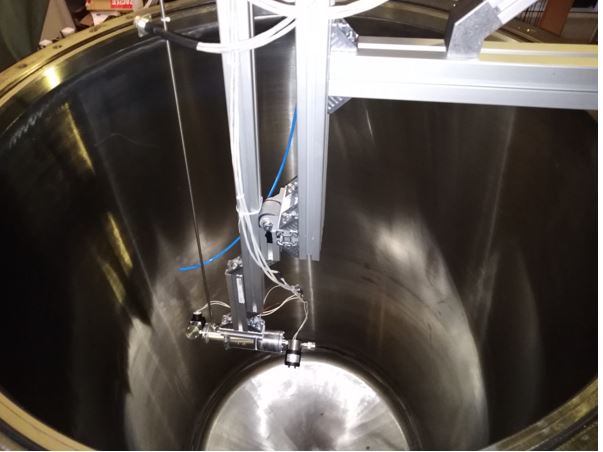 There are two different aspects involved in the energy management of the CCF: the “energy harvesting” subsystem collects the energy needed to make the robot operational while the “energy storage” subsystem decouples the “feeding” of the robot from its inspection task.

Several avenues were explored for the energy harvesting, ranging from a conventional docking station with inductive coupling to a Radioisotope Thermoelectric Generator (RTG), as a quasi-permanent onboard power source. The study of the latter lead actually to an interesting spin-off idea: for large LAr based neutrino detectors the CCF may be equipped with a radioactive source for some of its missions and sweep the internal volume, thus participating in the calibration process of the detector.

If feeding energy to the CCF is already not simple, storing energy in order to allow the robot to move freely (and eventually return to its parking position) is even more challenging. There is no directly applicable technology compatible with the in-cryostat operation. Several research groups are working to develop new electrolytes working in the range of 170-200 K but the reliability and the operational life of this new solution is still to be assessed, and anyway those temperatures are far too high for our application.

We therefore focused on studying whether conventional batteries survive when stored at very low temperatures (<100K). If that worked, the CCF could stay docked in a “hibernated” state and then be revived using an external power link (e.g. inductive as above discussed) to first heat the battery and then to charge it for the planned mission. We have managed to demonstrate the feasibility of this approach experimentally and this has been a major step forward to the validation of the CCF concept. We have also shown that by hosting batteries in a thermally insulated container almost no additional heating is needed to keep the batteries within an operational temperature range. More studies should be carried out to test whether there are changes in the lifetime of the battery when it goes through many such thermal cycles, but the results obtained so far have been very promising. Combining the visualization and energy management results we have concluded that the CCF will have a warm core (>250K) holding instrumentation and batteries enclosed within a double wall vacuum insulated shell. The next step would entail starting the mechanical design of the CCF hull and its inner core. 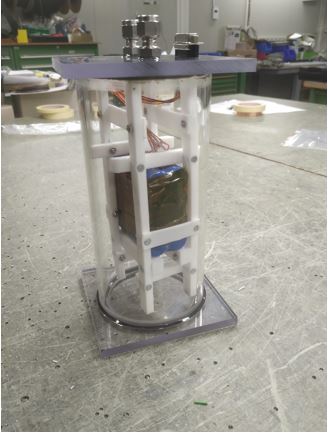 Figure 3 A battery surrounded by heaters (in the transparent container) before being inserted into an outer stainless steel vessel. Vacuum is created between the vessels for thermal insulation. Picture by X. Pons. 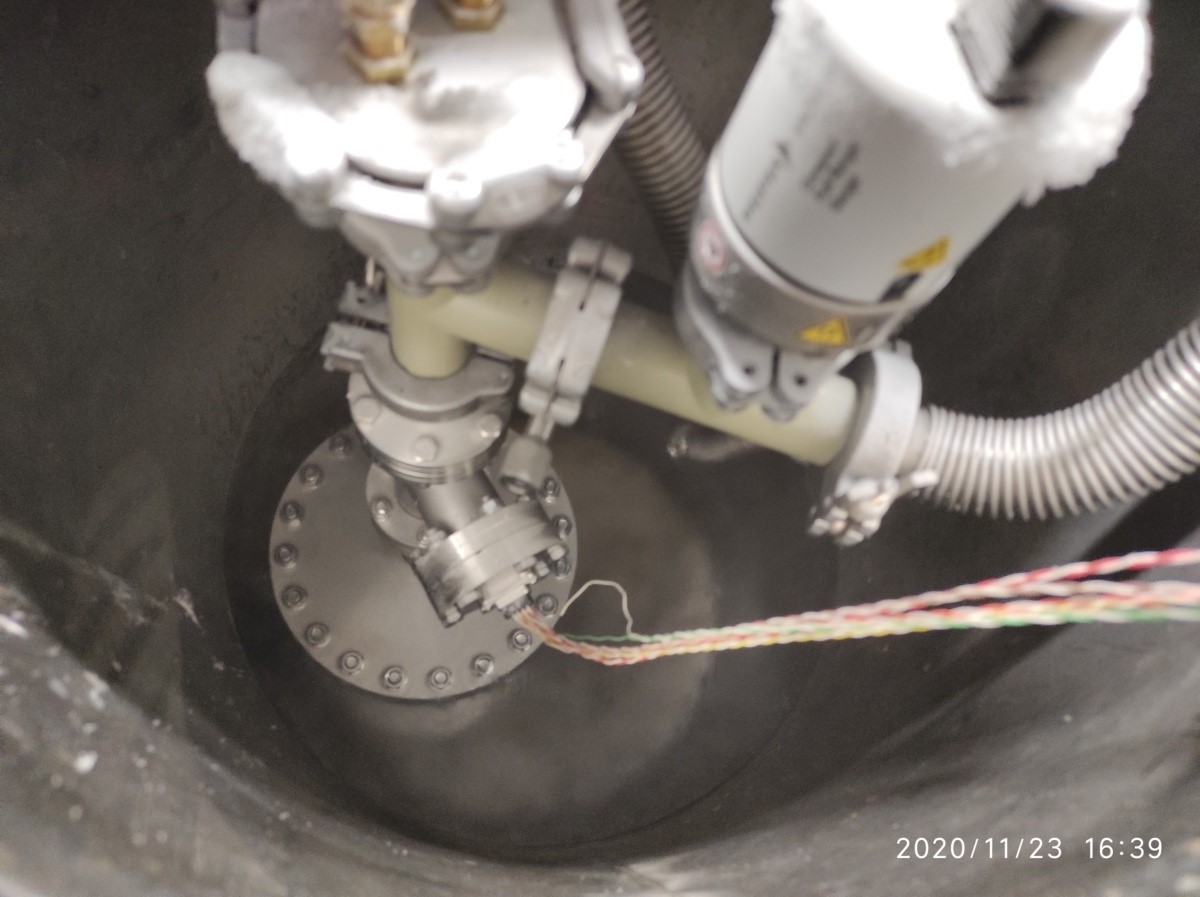 Figure 4 The battery is immersed into LAr. Several charging and discharging cycles were performed, measuring the response of the battery. Picture by X. Pons.

The ATTRACT phase 1 initiative is now complete and we are finalizing the documentation of our work. Looking back, we have come a long way since the formulation of our initial, vague ideas. We haven’t identified any show stoppers to the CCF concept yet and there is the strong desire to bringing the project to the next levels of maturity in the future, maybe by applying to ATTRACT Phase 2. While the CCF has occupied only a very small fraction of my working time, personally this has been a very enriching experience, which has taught me, once-again, how rewarding it is to work within a multidisciplinary team and to let fantasy and wild ideas blossom, with the aim of solving unprecedented challenges.