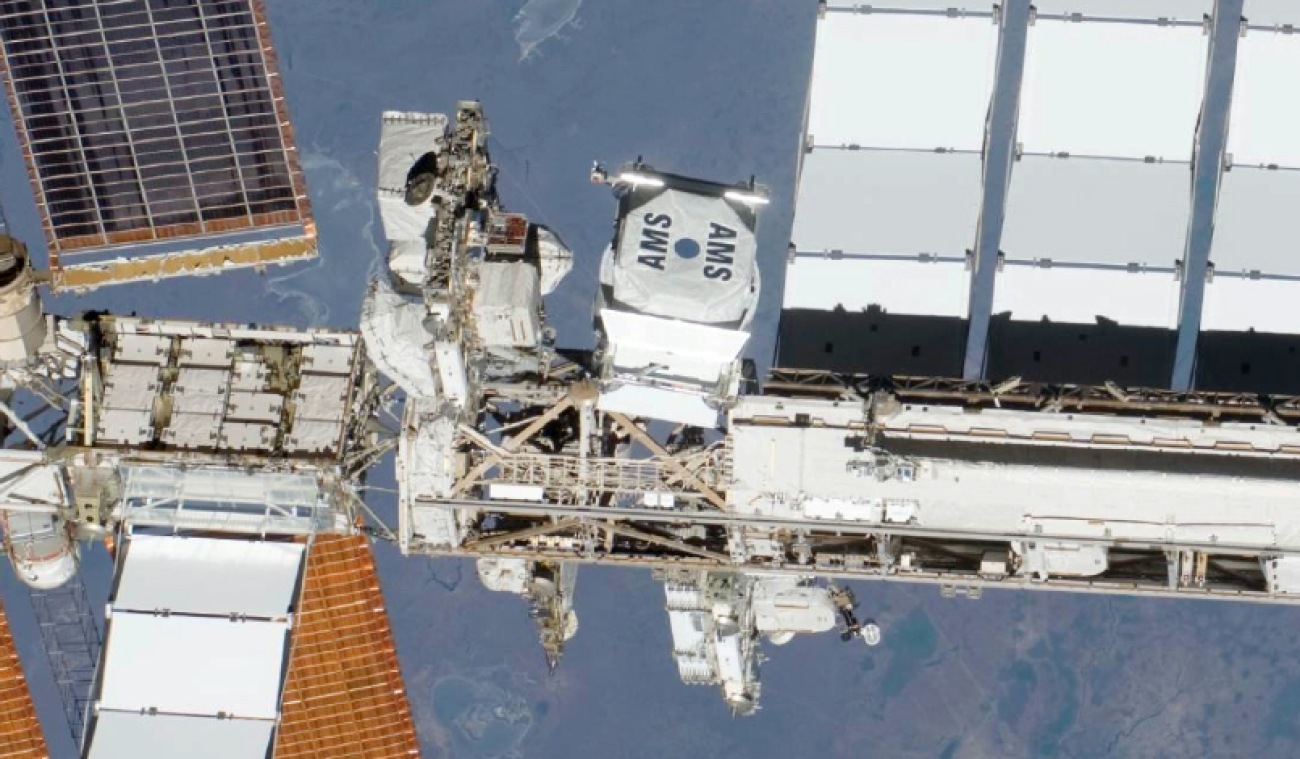 AMS, passed the milestone of its first 10 years of continuous operation on the International Space Station. AMS is a particle physics detector designed to measure antiparticles, particles, and nuclei of rigidity (momentum/charge) ranging from the GV to few TV (Figure 1). By performing accurate simultaneous measurements of cosmic-ray spectra AMS addresses long-standing open questions in both cosmic-ray physics, such as their origin, acceleration, and propagation mechanism, and in fundamental physics, such as the matter-antimatter asymmetry, the nature of dark matter, and the existence of exotic forms of matter.

AMS is the largest magnetic spectrometer ever deployed in space and includes Time Of Flight (TOF) and Anti-Coincidence Counters, a Transition Radiation Detector (TRD), nine layers of Silicon Tracker, of which 7 are inserted in the bore of a permanent Magnet, a Ring Imaging Cerenkov (RICH) and an Electromagnetic Calorimeter (ECAL). Since its installation on the International Space Station in May 2011, AMS has collected more than 200 billion cosmic ray events, and provided measurements of individual spectra of electrons, positrons, antiprotons, protons, and nuclei from helium (Z=2) to silicon (Z=14) [1], and iron (Z=26) [2], as well as the spectra of the helium isotopes. These precision measurements, more than an order of magnitude beyond previous measurements, are challenging our current understanding of cosmic rays.

Figure 1. The Alpha Magnetic Spectrometer detector combines five detectors to accurately measure the fluxes of cosmic-ray electrons, protons and nuclei and their antimatter counterparts of rigidities from GV to multi-TV. Cosmic rays are detected when entering from top to bottom in the nine Tracker layers (1 to 9), and in TRD, TOF, RICH and ECAL.Typical signals for particles, nuclei and their antimatter counterparts are sketched in the right. AMS provides the spectra of cosmic-ray nuclei for the elements of the periodic table from Hydrogen (Z=1) up to at least Nickel (Z=28).

The AMS detector was described in our previous newsletter together with results on electrons, positrons , antiprotons and primary and secondary nuclei. Primary cosmic rays, such as He, C, O, Ne Mg and Si, are mostly produced by sources, while secondary cosmic rays, such as Li, Be, B and F, are created by fragmentation of primaries in collisions with interstellar matter while they propagate through the galaxy. The AMS results have shown that light (He-C-O) and heavy (Ne-Mg-Si) primary nuclei group in two classes of rigidity dependence. Similarly, two distinct classes are observed in secondaries: the light (Li-Be-B) and the heavy (F) [3]. These results were recently completed by the publication of the spectra of two heavy nuclei, sodium (Z=11) and aluminum (Z=13) which are combination of primary and secondary cosmic rays. Sodium and Aluminum spectra, like the previously published Nitrogen (Z=7) spectrum, lie in between the spectra of primaries and secondaries forming a third group of cosmic rays (Figure 2 left). Their spectra are well described by a linear combination of a primary and a secondary component defined as the oxygen and boron spectra for the light nitrogen (Z=7) and silicon and fluorine spectra for the heavy Al and Na (Figure 2 right) [4].

Figure 2 : Left: Cosmic-ray spectra of nuclei from helium to silicon nuclei as measured with 10 years of AMS data. Two classes of primary –the light He-C-O and the heavy Ne-Mg-Si -- and two classes of secondary – the light Li-Be-B and the heavy F - are observed. The mixed primary and secondary – N, Na and Al – form a third group which lies in between the primary and the secondary classes. Right: The aluminum and sodium spectra are well described by a linear combination of a primary a secondary component represented by silicon and fluorine spectra respectively.

The impressive amount of data collected by AMS has allowed the detailed study of the time-dependencies of low-energy cosmic ray fluxes. These time variations arise from the action of the Sun’s magnetic field on cosmic rays arriving near Earth inside the heliosphere. The heliosphere is indeed a magnetic bubble resulting from the emanation of the Sun’s magnetic field in the local interstellar region. It acts as a magnetic shield to cosmic rays of rigidity below 100 GV. The strength of this shielding effect varies following the variability of the Sun’s magnetic field. The intensity of the solar magnetic field has periodic maxima and minima repeating every 11 years. The fluxes of low-energy cosmic rays are modulated by the Sun’s magnetic field: in periods of maximum solar magnetic field fewer low-energy cosmic rays arrive near Earth and their fluxes are suppressed, while during solar minima they can more easily reach the inner heliosphere and higher fluxes are observed. In addition, every 22 years the north-south polarity of the solar magnetic field reverses. This affects differently negatively and positively charged particles: during positive polarity positively charged particles travel more easily through the heliosphere than their negative counterparts while the opposite holds for negative polarity periods. AMS has observed these phenomena already in the past years measuring the monthly spectra of positrons, electrons, protons, and helium nuclei. Recently, AMS has published the daily proton and helium fluxes from 1 GV to 100 GV spanning over almost one entire solar cycle from 20 May 2011 to 29 October 2019 (Figure 3 left) [5]. Recurring variations on multiple timescales and dependent on rigidity have been observed in both fluxes, most likely linked to the Sun’s activity and to its rotation. Below 7GV, the proton and helium fluxes show different solar modulation: the helium flux exhibits larger time variations than the proton flux, in addition below 2.4 GV, the proton to helium flux ratio show different modulation before and after the solar maximum of 2014 (Figure 3 right). These unexpected observations provide input to the understanding of cosmic-ray propagation in the heliosphere and its dependence on rigidity, on velocity, on solar wind turbulence and on the parameters describing the interplanetary space environment. 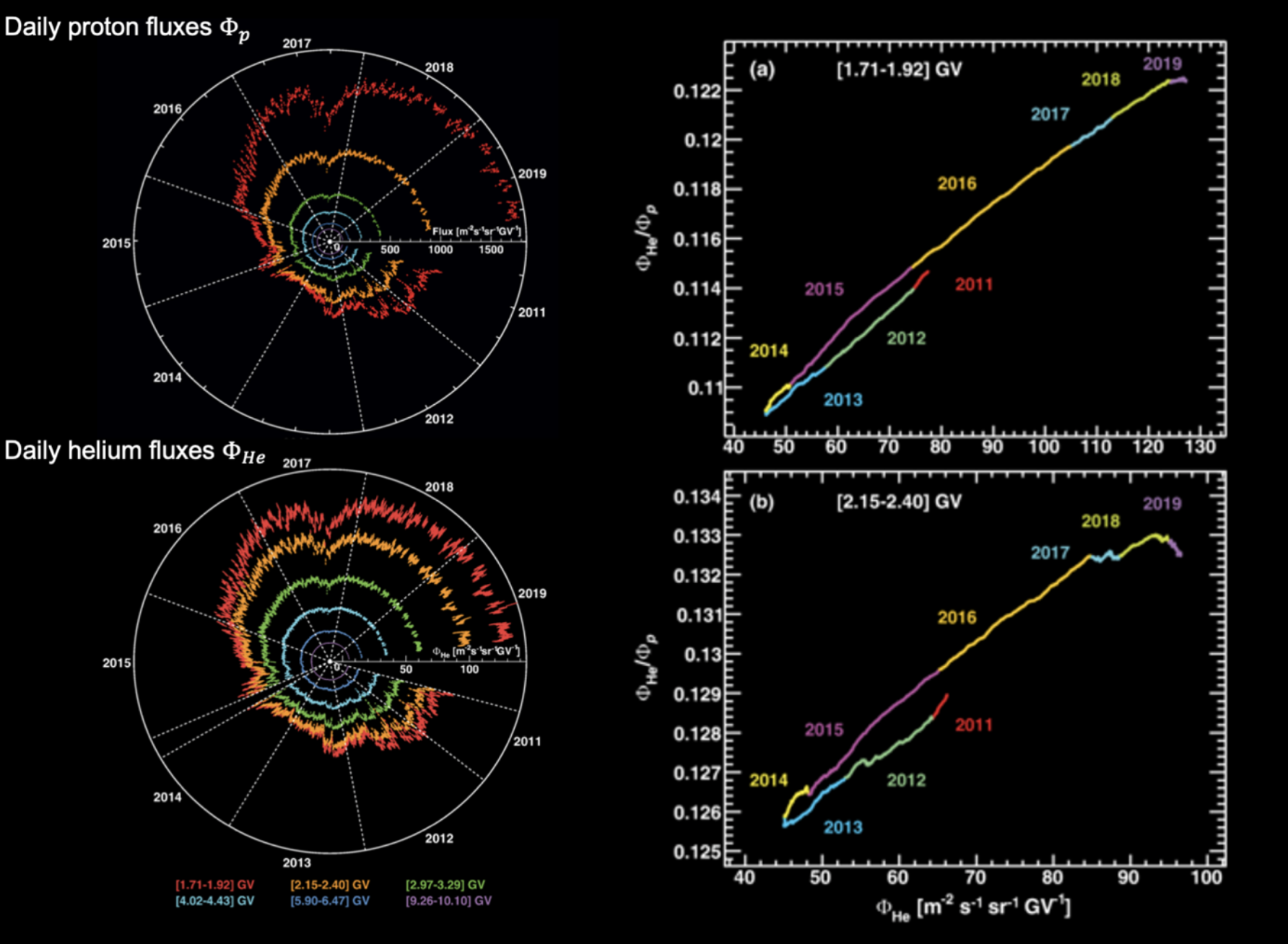 Figure 3. Left: AMS daily proton (top) and helium (Bottom) fluxes for six rigidities 1.71 GV to 10.10 GV from May 20, 2011 to October 29, 2019 covering the ascending phase, the maximum, and descending phase to the minimum of solar cycle 24 (from December 2008 to December 2019). Right: the helium to proton flux ratio as function of the helium flux both calculated with a moving average of about 14 months with one day step for two rigidities ranges below 2.4 GV. Different colors highlight data for different years. A hysteresis between the He-to-proton ratio and the helium flux is observed before and after the solar maximum in 2014.

This year, in-person conferences were finally resumed, and this provided an opportunity to celebrate the first 10 years of uninterrupted operation of AMS on the ISS. At recent summer conferences ( ICHEP2022 ,COSPAR 2022, ECRS2022, TeVPA2022) AMS updated results obtained with 10 years of data have been presented together with new preliminary results on the spectra of heavy nuclei and of the isotopes of hydrogen lithium and beryllium nuclei. A special session at the COSPAR 2022 Scientific Assembly was dedicated to ten years of AMS on the ISS. Latest measurements of already published spectra of proton, nuclei, electron, positron, and antiproton updated with the 10-year dataset were presented (Figure 2 and Figure 4)

The electron spectrum is now measured up to energies of 2 TeV with an unprecedented statistic of 50 million electron events. The positron spectrum, now based on 3.4 million positron events, has been extended up to 1.4 TeV (Figure 4 left). Whether Dark Matter particles annihilation or decay, or Pulsars are at the origin of the high-energy positrons has not been established yet. Pulsars cannot produce antiprotons. Still, the antiproton spectrum, now based on 0.8 million events, exhibit a puzzling similarity with the positron spectrum above 60 GeV (Figure 4). A detection of anisotropy in the arrival direction of positrons would point to a Pulsar origin. So far, the flux is compatible with isotropy within the experimental uncertainties. These uncertainties could be reduced by accumulating more statistics.

The operation of the International Space Station has now been extended through 2030. Lately, the AMS Collaboration has started working on the upgrade of the AMS detector to profit of the extended ISS lifetime. Progress on the AMS upgrade activities from both the NASA AMS Project Office and the AMS team were presented at the COSPAR2022 scientific assembly. The upgrade aims at increasing the acceptance of the current AMS detector by a factor 300% to match that of its original design by adding a full-size silicon tracker layer on top of the actual detector (Figure 5 left). The upgrade will allow to extend the positron flux measurement from the current 1.4 TeV to 2 TeV, to extend the electron flux measurement from the current 2 TeV to 3 TeV, and to reduce the uncertainties on both measurements by a factor 2 over the entire energy range. This will bring new insights on the origin of the high-energy positron and electron sources. The statistics that will be collected with the upgrade will allow to increase the accuracy of the positron anisotropy measurement permitting a separation between Dark Matter and Pulsars at the 99.93% level. The accuracy of the positron to antiproton ratio in the energy range 60 GeV to 525 GeV will increase adding further constraints to the Pulsar origin of high-energy positrons. The new tracker layer will provide additional measurement points and constraints in the study of antimatter such as anti-deuterons, anti-helium and beyond. Finally, the upgrade will greatly increase the statistics of nuclei beyond silicon (Z>14) allowing to provide measurements of the spectra of fourteen heavy nuclei from phosphorus (Z=15) to zinc (Z=30) with accuracies similar to the already published spectra of lighter nuclei.  The construction of the new tracker layer has already started for a targeted launch and installation on the AMS detector in 2025. 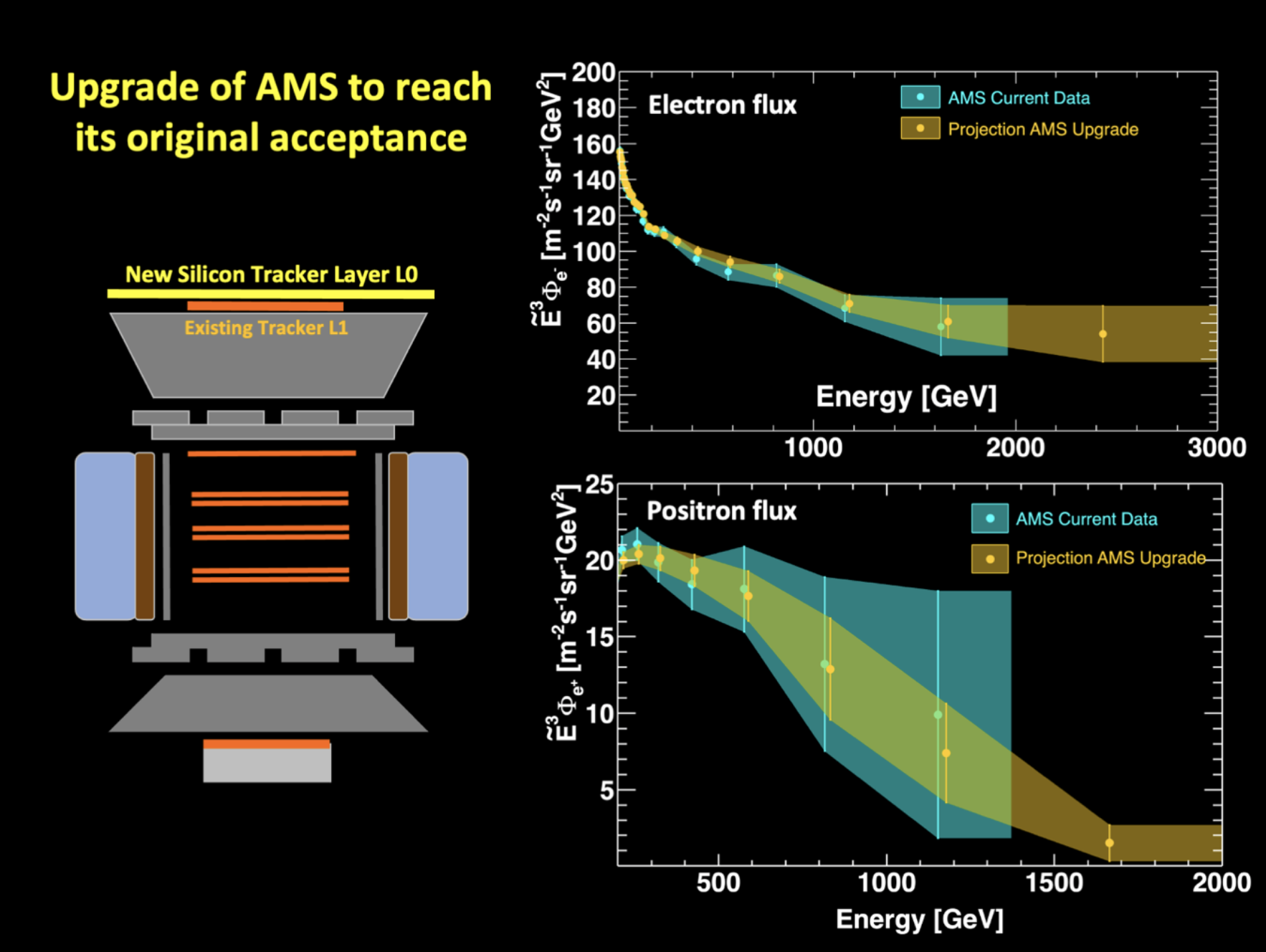