Following an intense period of upgrades, a totally revamped ALICE experiment statred  a very challenging period of commissioning with beam and data-taking during the first year of the LHC Run 3.

The ALICE detector has undergone a major upgrade during the LHC long shutdown 2. New Inner Tracking System (ITS2, see previous EP news article), instrumented with monolithic active pixel detectors with a spatial resolution of about 5 microns, and features 12.5 M megapixels. The ITS2 was installed in the central-rapidity barrel and forward muon-spectrometer acceptances. The new GEM-based continuous readout endcaps of the Time Projection Chamber will allow the experiment to cope with the high interaction rates of Run 3 and also Run 4. Moreover, the new Fast Interaction Trigger (FIT) detectors has been realized and put in place on both sides of the Interaction Point, along with the readout upgrade of several other detector components. The large data flow arising at the higher luminosities of the next runs of the LHC will be handled and an integrated online-offline processing system will enable recording Pb-Pb collisions at an interaction rate of up to 50 kHz.

The ALICE upgraded apparatus was commissioned with cosmic-ray muons and, in October 2021 and during the first part of the LHC ramp up in 2022, with a proton-proton pilot run at the centre-of-mass energy of 900 GeV. A number of benchmark analyses of the new data were carried out in order to fully validate the new hardware, online and offline processing software, as well as a redesigned analysis framework that meets the larger data-throughput requirements of Run 3. 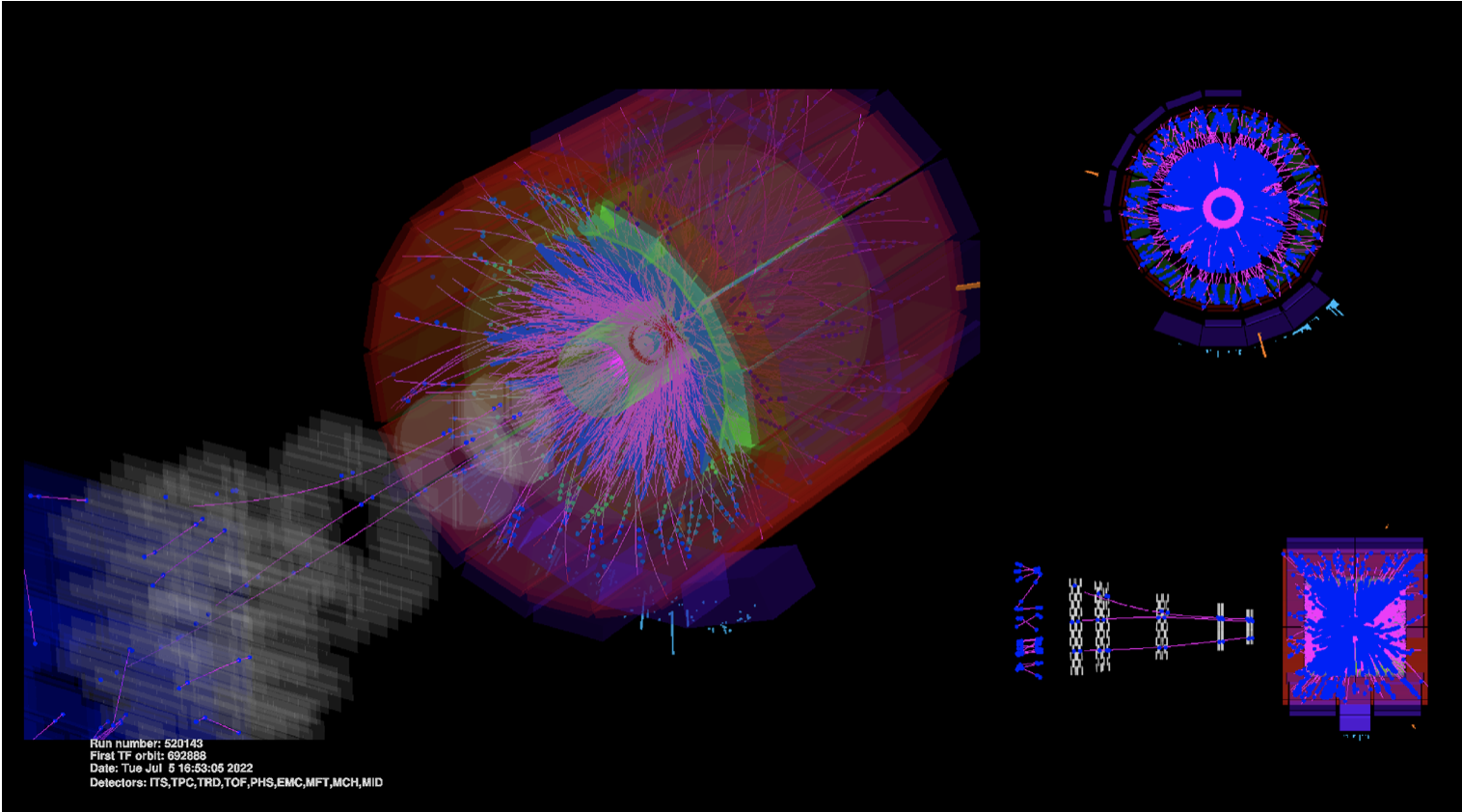 Earlier in 2022, the ALICE experiment recorded its first stable beams with protons-protons at 13.6 TeV, allowing to complete and validate all new components under the full swing of the LHC operation (Figure 1). These tests have been extremely important to understand the responses of the upgraded detectors with collisions and the performance of the new O2 system as well as to advance the asynchronous reconstruction, global calibrations, and analysis framework. Results of integrated luminosity confirmed ALICE readiness to collect data during Run 3 (Figure 2).

Figure 2: Despite the beam time used for commissioning ALICE  has integrated 17.5 pb-1 of pp luminosity during 2022.

Following the successful start of Run 3, on Friday heavy-ion circulated again in the Large Hadron Collider (LHC) for a short test run after a gap of four years. Lead nuclei were accelerated and collided at the record energy of 5.36 TeV per nucleon-nucleon collision. The test was also a crucial milestone for ALICE, in light of the future heavy-ion physics runs planned for 2023 and the following years of Run 3 and Run 4, when the LHC will provide a ten-fold increase in the number of these collisions with respect to the previous runs.

ALICE recorded 1.1 M of minimum bias events druing the test lead-lead collisions with all of the fifteen detectors included in the data taking. The ZDC detector, which provides luminosity information during the Pb-Pb running was readily commissioned and used. Data of individual readout units were processed in real time by First Level Processors and then assembled for the full event reconstruction in the Event Processing Nodes (EPN). A few EPNs, each equipped with 8 Graphical Processing Units (GPUs), were sufficient for this test, while all of the available 250 nodes will be needed for the regular lead-lead physics runs. The reconstructed collisions were displayed in real time in the ALICE Run Control centre (see figure 3), along with several data properties that are used for Quality Control.

Figure 3: A Pb-Pb central collision displayed live in the ARC.

Even if very short, the 2022 lead-lead collisions can be considered a success for the ALICE experiment as its sub detectors saw and recorded lead-lead collisions at a new record energy for the first time. We are now looking forward to the next heavy-ion physics campaign in 2023, while in parallel the ALICE collaboration is working to further upgrade its apparatus in view of the forthcoming Run4, scheduled in 2029. A new Event Display render is being deployd for an improved representation of the Geometry of the new ALICE detector (Figure 4 ) 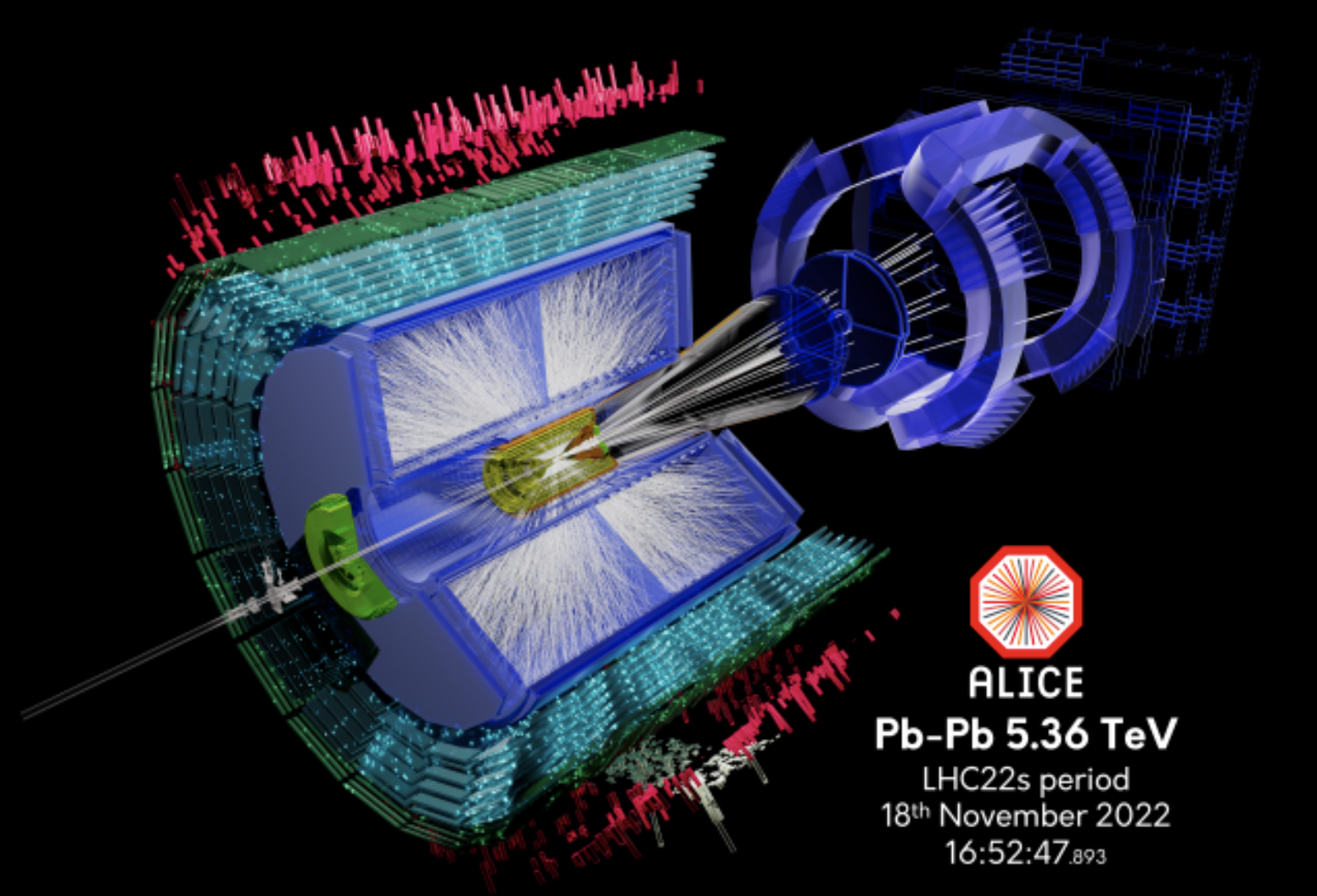