As reported in an ATLAS Physics Briefing, physicists studied over 20 billion collision events recorded by the ATLAS detector, looking for events with three isolated leptons (electrons or muons), a momentum imbalance in the plane perpendicular (transverse) to the proton beam, and two or three jets of hadrons originating from the fragmentation of quarks (with one jet originating from a b-quark).They were able to identify about 600 candidate events with such a signature and after applying strict selection criteria  still about 120 of those were expected to come from the tZq production process.

Therefore, ATLAS physicists employed machine learning techniques to best separate their signal from background processes. They trained an artificial neural network to identify tZq events using precisely simulated data. As explained in the Physics Briefing: "The neural network provided each event with a score (ONN) that represented how much it looked like the signal process. To check that the simulation fed to the neural network gave a good description of the real data, physicists looked at events with similar signatures (control regions) that are dominated by background processes. Various kinematic distributions of the 600 selected signal-region events were also checked."

The neural network score was evaluated in both signal (Figure 1) and control regions to allow better constraining of the background levels with real data. The tZq signal was extracted and the cross-section for such event was computed with an uncertainty of 14%. This is over a factor of two more precise than the previous ATLAS result, which was based on almost four times less data (from 2015 and 2016). The cross-section was found to be in agreement with the prediction from Standard Model, confirming that even the heaviest particles in the Standard Model still behave as point-like elementary particles.

Figure 1: The neural network output (ONN) distribution for one of the signal regions. Data is shown in black. The simulated signal is shown in magenta. Backgrounds are shown in other colours. The high part of the ONN spectrum is dominated by signal events. (Image: ATLAS Collaboration/CERN).

Further, by selecting for events identified by the neural network as very likely to be tZq events (ONN > 0.4), ATLAS examine whether the kinematic distributions are well described by the Standard Model calculations as shown in Figure 2. 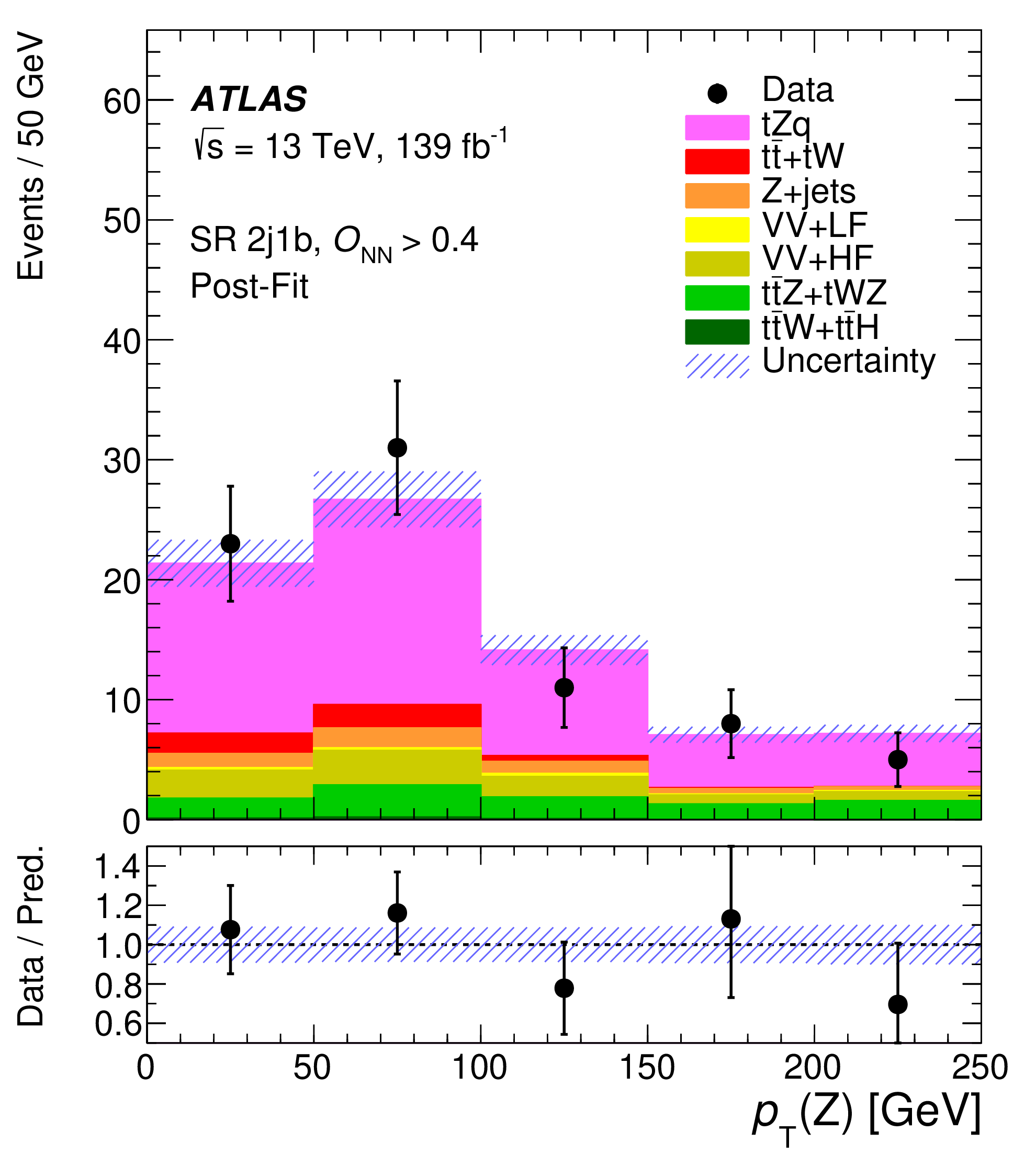 Figure 2: Distribution of the reconstructed Z boson transverse momentum for events with a neural network output (ONN) > 0.4. The simulated signal is shown in magenta. Backgrounds are shown in other colours. (Image: ATLAS Collaboration/CERN).

With the observation of the tZq production process now confirmed, ATLAS researchers can anticipate its study in even greater detail. Measurements of the cross-section as a function of kinematic variables will allow physicists to carefully probe the top quark’s interactions with other particles. Will more data unveil some unexpected features? Look forward to seeing what Nature is hiding in the top world.

Another interesting option explored by the LHC experiments is the search for new particles that exist for more than a fleeting moment in time before decaying to ordinary particles (see previous EP article "Exploring the LifeTime frontier"). The so-called “long-lived” particles can travel measurable distances (fractions of millimetres or more) from the proton-proton collision point in each LHC experiment before decaying. Often, theoretical predictions assume that the long-lived particle is undetectable. In that case, only the particles from the decay of the undiscovered particle will leave traces in the detector systems, leading to the rather atypical experimental signature of particles apparently appearing from out of nowhere and displaced from the collision point.

Standard algorithms used to interpret the data from proton-proton collisions are not designed to seek out such odd-looking events. Therefore, the CMS Collaboration has developed an artificial neural network to identify these unusual signatures as explained in a recent CMS update. The neural network has been trained (with supervision) to distinguish sprays of particles known as “jets” produced by the decays of long-lived particles from jets produced by far more common physical processes. A schematic of the network architecture is shown in Fig. 3 and its performance is illustrated in Fig. 4. The network learns from events that are obtained from a simulation of proton-proton collisions in the CMS detector. Figure 3: An illustration of the performance of the network. The coloured curves represent the performance of different theoretical supersymmetric models. The horizontal axis gives the efficiency for correctly identifying a long-lived particle decay (i.e. the true-positive rate). The vertical axis shows the corresponding false-positive rate, which is the fraction of standard jets mistakenly identified as originating from the decay of a long-lived particle.

The study used both real collisions data and simulated events to train the network (see Fig.4). As explained: "This approach is used because the simulation - although very sophisticated - does not exhaustively reproduce all the details of the real collision data. In particular, the jets arising from long-lived particle decays are challenging to simulate accurately. The effect of applying this technique is that the information provided by the neural network agrees to a high level of accuracy for both real and simulated collision data. This behaviour is a crucial trait for algorithms that will be used by searches for rare new-physics processes, as the algorithms must demonstrate robustness and reliability when applied to data."

In the next monhts, the CMS Collaboration will deploy this new tool as part of its ongoing search for exotic, long-lived particles. This study is part of a larger, coordinated effort across all the LHC experiments to use modern machine techniques to improve how the large data samples are recorded by the detectors and the subsequent data analysis. The experience gained from these studies will increase the physics potential during Run 3, from 2021, and beyond with the High Luminosity LHC.

Figure 3: Histograms of the output values from the neural network for real (black circular markers) and simulated (coloured filled histograms) proton-proton collision data without (left panel) and with (right panel) the application of domain adaptation. The lower panels display the ratios between the numbers of real data and simulated events obtained from each histogram bin. The ratios are significantly closer to unity for the right panel, which indicates an improved understanding of the neural network performance for real collision data, which is crucial to reduce false positive (and false negative!) scientific results when searching for exotic new particles.

Note: The story is based on information from the ATLAS and CMS public websites as mentioned in relevant references within the article.