Exploring the Lifetime Frontier at the LHC and Beyond 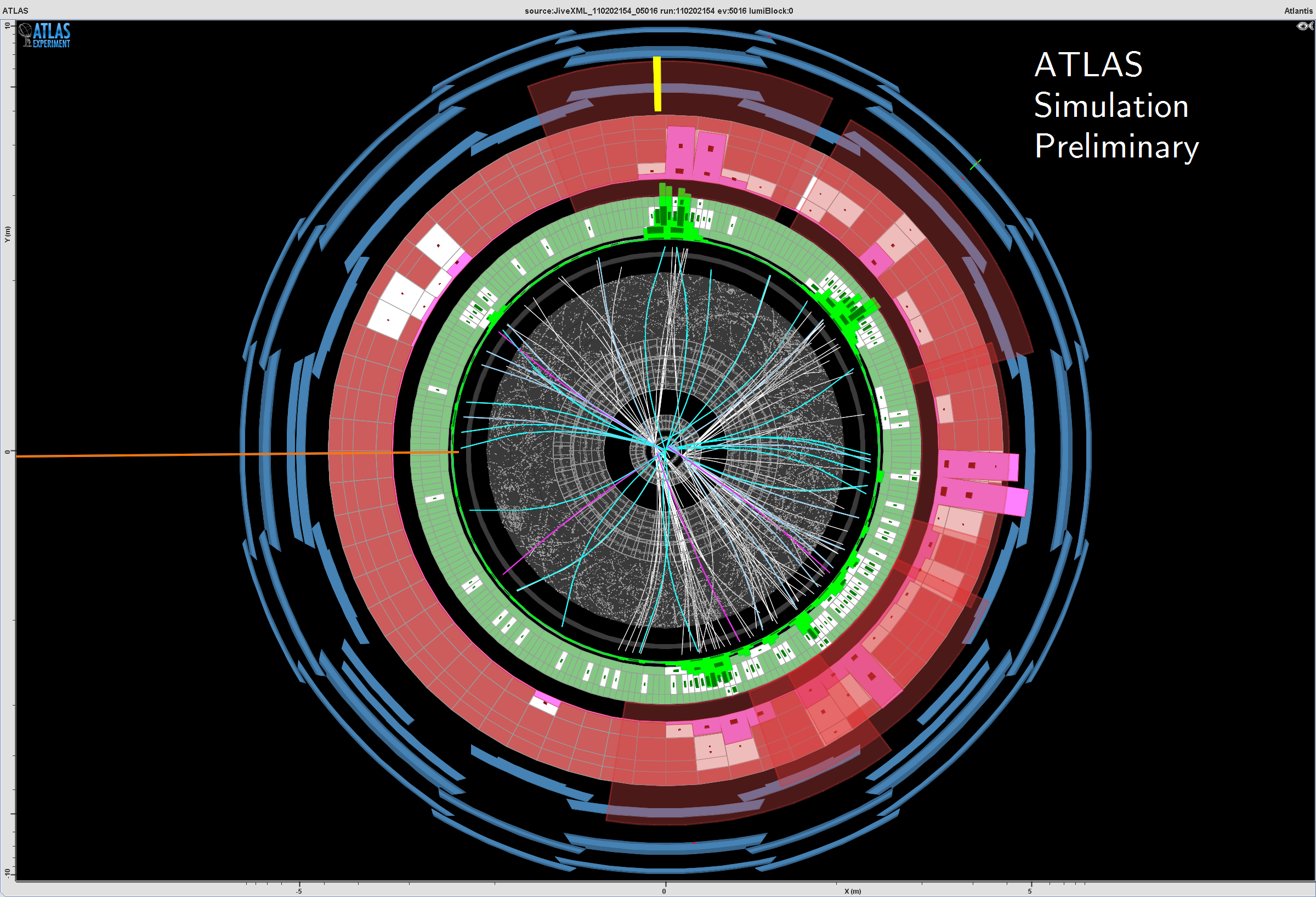 By any reasonable measure, the first ten years of the LHC have been an unmitigated success.  But are we exploring everywhere in our data?  The overwhelming majority of the searches for particles beyond the Standard Model (BSM) conducted at ATLAS and CMS, for example, assume that the new particle — such as a new force-carrier like a Z’, a squark or gluino from supersymmetric models, a quantum black hole, an exotic cousin of the Higgs boson — after being produced in the proton-proton collision, lives for such a short amount of time that it decays to detectable Standard Model (SM) particles essentially immediately, or “promptly”.

But is this a good universal assumption?  What if the new BSM particle lives long enough to drift millimeters, centimeters, or even meters into our detectors before decaying?

At first glance, this might seem baroque, but the SM contains particles that span an enormous range of lifetimes, from the Z boson (which lives for about 10^-25 seconds) to B-hadrons (~picoseconds) the muon (2.2 µs) to the electron (stable). Treating the lifetime of the BSM particle as a free parameter, instead, results in detector signatures very different from those resulting from promptly decaying particles. Unless dedicated triggering strategies are used and special searches are conducted (and indeed new dedicated detectors are built), these long-lived particles (LLPs) could escape our grasp and remain undiscovered.

Searches for LLPs have been conducted from the beginning of the LHC’s research program (and previously at Tevatron and LEP), but until about 2016 they had always been considered fringe or exotic-exotic rather than a core component of our research. It was under this set of circumstances that, in early 2016, a few of us independent researchers from ATLAS, CMS, LHCb, and the theory and phenomenology communities formed the LHC LLP Community initiative, dedicated to answering one question: How do we best ensure that we don’t miss LLP discoveries for the remainder of the LHC research program and beyond?

After the success of our first mini-workshop in 2016 — and continuing the tradition defined by prior workshops such as “LHC Searches for Long-Lived BSM Particles: Theory Meets Experiment", at the University of Massachusetts, Amherst, in November of 2015, and “Experimental Challenges for the LHC Run II", at the Kavli Institute for Theoretical Physics in May of 2016 — our efforts have grown into an ongoing platform for new ideas, discussion, and brainstorming.  The main activities of this initative so far have been a major community white paper, made public in March of 2019, and two workshops a year, the most recent of which was held from 25-27 November 2019, at Ghent University in Belgium, titled, “Searching for long-lived particles at the LHC: Sixth Workshop of the LHC LLP Community”.

This flurry of cross-experiment and theory-meets-experiment collaborative activity has nicely tracked an explosion in experimental activity.  Not only have the ATLAS, CMS, and LHCb collaborations continued to publish a growing number of BSM LLP searches, multiple separate and dedicated detectors outside of — but still using the collision points inside of — the central experiments have been built or proposed. The first of these was the MoEDAL experiment, which has been running near the LHCb detector since 2015 and searches for LLPs like monopoles.

The FASER experiment — recently fully funded, approved, and to be installed in 2020 — will be a detector apparatus several meters long and about 20 cm by 20 cm wide, positioned 480 m away from the ATLAS experiment near the LHC tunnel to catch any LLPs (like dark photons) that are produced in the middle of the ATLAS detector and travel very close to the beamline but outside of the detector volume.  Likewise, the CODEX-b experiment is proposed to be installed near LHCb and the MilliQan experiment (with a working prototype already installed) near CMS.  And the MATHUSLA experiment proposal takes this concept to the extreme, designed to be an open-air chamber, 200 m by 200 m by 20 m, instrumented with layers of resistive plate chambers, positioned on the earth’s surface above CMS, resulting in an experiment optimally sensitive to ultra-long-lived particles not possible to be detected by any of the other schemes. Similarly, a recent proposal to instrument the service caverns above ATLAS or CMS, called ANUBIS, would be nicely complementary to the existing suite of proposals, and a far-future proposal — for Run 5 in the High-Luminosity era of the LHC — called AL3X would modify the existing experimental setup of the ALICE detector, installing a large amount of shielding near the collision point to reduce backgrounds to negligible, creating an excellent LLP detector. By nature, such searches are exploratory and experimental. They’re inspired not by any particular theoretical motivation but by our desire to ensure that we don’t miss new discoveries based upon quite universal ideas from particle physics and quantum field theory themselves that may give rise to uncovered or undercovered detector signatures. A new particle may be neutral or charged, may have higher or lower mass, may decay in some set of ways to SM particles, and, yes, may have a lifetime that is long compared to the vast majority of prompt searches.  These assumptions are generic.  The benefits of employing this mindset — mapping out detector signature space rather than theory model — are many, not least of which is that it makes it straightforward for theorists to compare our results to those from other experiments in the context of very simple classes of theoretical models that could help us understand the biggest open questions of physics.

Dark photons could appear in ATLAS, CMS, or LHCb as LLPs, and these dark photons could be similar to those searched for in non-LHC experiments like NA62, Belle 2, APEX, HPS, etc. — and could explain why dark matter is so elusive and point toward a means of discovering it.  Heavy neutral leptons could also appear as LLPs, and if they were found at the LHC such a finding could potentially be corroborated by planned experiments like SHiP, DUNE, NA62, and others — and could help explain why SM neutrinos have such small masses and potentially explain the matter-antimatter asymmetry of our universe.

Similar connections exist between multiple other LLP signatures and burning open questions of physics.  The exploration of these connections is the task of initiatives like the Physics Beyond Colliders project and the upcoming workshop on feebly-interacting particles, FIPs 2020, in May of next year, that will bring together members of collider, accelerator, neutrino, axion / ALP, dark matter direct and indirect detection communities as well as theorists and phenomenologists to compare and contrast discovery capabilities for very feebly-coupled particles — including LLPs — among multiple experiments. Such collaborative, community-based projects to understand deeply how theoretical considerations relate to experimental capabilities for LLPs and FIPs are a natural continuation of already existing fundamental work. The MATHUSLA physics case document contains a comprehensive collection of the vast array of theoretical frameworks within which LLPs naturally arise. And the Physics Beyond Colliders BSM document contains a similarly comprehensive exploration of the various experiments around the world, existing and proposed, of projections as to their potential to make discoveries in the context of several different classes of theoretical models, or portals. This connection to the theory and phenomenology communities is vital, but the single most important aspect of contemporary particle physics is that theory no longer solely guides us. As experimental particle physicists our duty is to map our detector signature space, not theoretical model space.  The future is experimental. This was the organizing principle of the LHC LLP Community white paper.  It’s a comprehensive document — a combination review paper; set of recommendations for simplified models, triggers, and searches to be conducted; accounting of open discovery possibilities; record of accumulated knowledge; and speculation for the future — that serves as the definitive guide to LLP searches at the LHC.  It also contains a unique chapter on dark showers, a relatively unexplored theoretical idea that postulates that the dark sector — undiscovered BSM particles related to dark matter that don’t interact with regular matter very much, if at all — could be structured more like our SM quantum chromodynamics (QCD), but with couplings and parameters potentially very different from ours. This dark QCD could give rise to completely wild and unexplored detector signatures, and will present a wonderful set of challenges and opportunities in the future.  This framing — that theory models should more generically inform experimental searches in the context of uncovered detector signatures — is a good example of the organizing principle of the white paper.

This is also the organizing principle of the LHC LLP Community workshops, like the one in Ghent in November 2019.  Several dozen researchers traveled from around the world to discuss LLP signatures, new results from experiments, possible triggers for LHC Run 3 and the HL-LHC, ways to look for LLPs in astrophysics and cosmology, and, yes, new theoretical ideas for LLPs that, crucially, would give rise to searches or detector signatures that we are currently not covering or that are challenging or impossible to perform with existing experimental methods. This emphasis on stretching our detectors and analysis techniques to their limits in the search for LLPs has also driven one of the most recent initiatives with the LHC LLP Community, exploring machine learning (ML) techniques.

This was a core component of the Ghent workshop, as well, where, in addition to several new independent studies of ML methods applied to LLP searches, there was much progress in utilizing CMS Open Data — 300 TB of CMS data released to the world at large several years ago — to create a community training set for LLP searches, to enable multiple researchers within and outside of the CMS experiment to make progress on this front.  This work will be a focus of next year’s workshops, currently planned to be held at CERN and in Japan.

The particle physics community is embracing its duty to fully explore the lifetime frontier.  This extends to future high-energy collider projects, as well. Several studies have already been performed to investigate the potential to discover LLPs — and to ensure that LLPs as discovery modes are not overlooked — at proposed machines such as the Future Circular Collider (FCC) at CERN, the Circular Electron-Positron Collider (CEPC) in China, and linear colliders like CLIC (CERN) and the ILC (Japan), but many more studies are needed. Mapping the lifetime frontier is a work in progress.