AWAKE is an accelerator R&D experiment. In the coming years the AWAKE experiment should pave the way to understanding the physics and potential of proton-driven plasma wakefield acceleration for future accelerators.

Over the last fifty years, accelerators of ever increasing energy have been used to probe the fundamental structure of the physical world. This has culminated so far in the Large Hadron Collider (LHC) and the discovery of the Higgs boson that was the missing piece of the Standard Model; a model that describes observed matter and the three forces that govern fundamental interactions. However, although the Standard Model has been incredibly successful there are still several unexplained phenomena that pose some of the big questions in science including the existence of dark matter, the matter-antimatter asymmetry as well as the neutrino masses to name but a few.

That the Standard Model cannot answer all these questions, points towards the need for exploring new frontiers and test new theories that predict new particles or phenomena at higher energy scales along with higher-precision measurements of the Higgs particle to gain a deeper understanding of the present theory. Searching for possible new phenomena call for pushing the current particle energy and intensity frontiers and thus for the design and construction of larger more powerful accelerators. The HL-LHC is already foreseen to upgrade the delivered luminosity of the LHC by an order of magnitude.

Though results from the next runs of the LHC and from other experiments will point to the next research directions it seems likely that in the future lepton collisions at the scale of TeV might be needed. Such a future electron–positron collider would therefore have the potential to search for new physics as well as being able to measure to high precision new phenomena discovered already at the LHC. Presently different design studies are ongoing both for circular and linear electron-positron colliders that may be the next step in our exploration of the Universe. A higher acceleration-grade is desirable – much higher than the approximately 100 MV/m that can be achieved today, and thus one should also consider alternative accelerating concepts/techniques.

This has been one of the main motivations for the AWAKE collaboration. It was formed to explore the potential of building proton driven plasma wakefield accelerators for the first time. Ionized gases, or plasmas, with densities over a thousand times lower than that of the atmosphere, can sustain accelerating gradients (several 10 GeV/m) orders of magnitude larger than RF structures. These large fields are due to the collective plasma wakefield acceleration response of the plasma electrons to the electric field of a drive beam. The plasma, without initial structure, supports waves travelling at velocities near the speed of light, ideal to accelerate particles to relativistic energies. These wakefields have a longitudinal component able to extract energy from the driver and transfer it to a trailing witness bunch (of e.g. electrons). The wakes also have transverse wakefield components with focusing strength orders of magnitude larger than that of conventional magnets, allowing for the two beams to remain transversely small over long distances. This combination of large plasma fields and long confined propagation distances can lead to the large energy gain necessary for high-energy physics applications, but over much shorter distances than with today’s RF and magnet technology.

Conceptual Design of the AWAKE experiment at CERN. The major elements of the experiment are shown and the expected effects are described.

The potential of plasma as the medium for high gradient acceleration has been demonstrated at laboratories around the world with laser and electron beams as drive beams. Short and intense laser pulse drivers have yielded  electron bunches of up to 2 GeV energy gain in cm-long channels that corresponds to about 100 GV/m average accelerating fields. High gradients have also been demonstrated with a short, high charge electron bunch driver with an energy gain of 42 GeV in 85 cm, corresponding to 52 GV/m.

However, in both of these pioneering experiments the energy gain was limited by the energy carried by the driver (∼ 100 J) and the propagation length of the driver in the plasma (< 1 m). The laser pulse and electron bunch driver schemes therefore require staging, i.e. the stacking of many 10 − 25 GeV acceleration, or plasma, stages to reach the ∼ 1 TeV energy per particle or equivalently ∼ 2 kJ of energy in ∼ 2 × 1010 electrons and positrons. These propagation length and energy limitations could be avoided by using a proton bunch to drive the wakefields.

Because of their high energy and mass, proton bunches can drive wakefields over much longer plasma lengths than other drivers. They can take a witness bunch to the energy frontier in a single plasma stage, as was demonstrated in simulations. This proton-driven scheme could therefore greatly simplify and shorten the accelerator. In addition, because there is no gap between the accelerator stages, this scheme avoids gradient dilution.

AWAKE, Advanced Proton Driven Plasma Wakefield Acceleration, is the first proton driven plasma wakefield acceleration experiment worldwide, with the aim to provide a design for a plasma based linear collider. The AWAKE experiment at CERN was proposed by an international collaboration that as of today consists of 16 institutes.  The collaboration first outlined the proposed experiment in a letter of intent that was presented to the SPS committee in 2011 followed in 2013 by a design report that was submitted to the CERN management and to the SPSC. The AWAKE experiment was finally approved by CERN’s Research Board in August 2013.

The measurement programme of the AWAKE experiment at CERN includes benchmark experiments using proton bunches to drive wakefields and to understand the physics of the proton self-modulation process in the plasma. It will also probe the accelerating wakefields with externally injected electrons, study the injection dynamics and production of multi-giga-electron-volt electron bunches, and develop long, scalable and uniform plasma cells and schemes for the production and acceleration of short proton bunches.

AWAKE will use an LHC-type proton bunch of 400 GeV/c (but with higher intensity of 3 1011 protons/bunch) that will be extracted from the CERN SPS and sent towards a plasma cell. The proton beam is injected into a 10m plasma cell where the long proton bunches will be modulated into significantly shorter micro-bunches. These micro-bunches will then initiate a strong wakefield in the plasma with peak fields above 1 GV/m that will be harnessed to accelerate an externally injected bunch of electrons from about 20MeV to the GeV scale within a few meters. 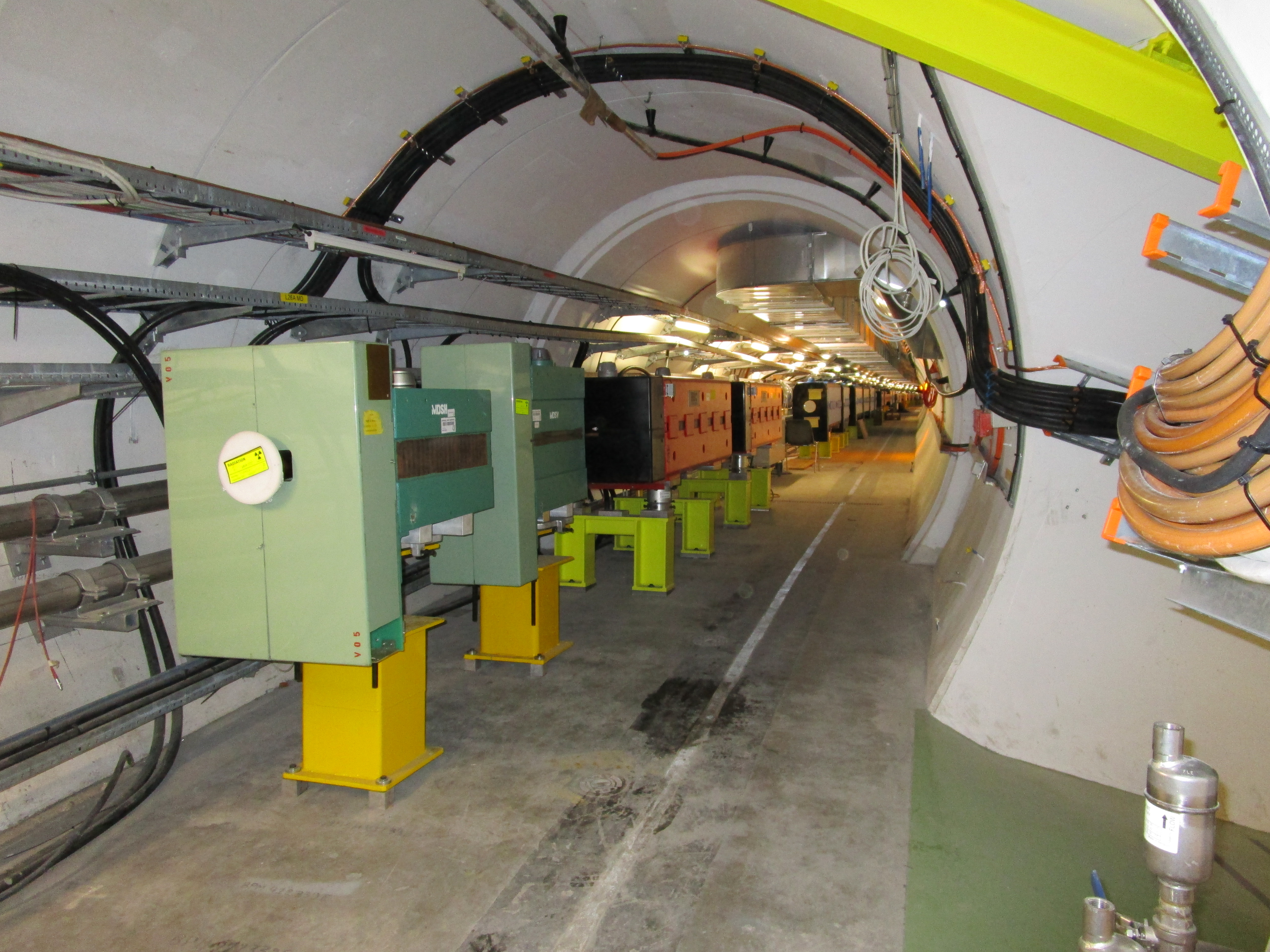 The AWAKE proton line with all the magnets installed. (Image: AWAKE collaboration.)

AWAKE will complete its first phase of installation this year, with the installation of plasma cell, the laser, which is needed to ionize the gas in the plasma cell, the vacuum equipment and the diagnostic system for both laser and proton beams. It plans to start the first phase of the experimentation at the end of this year, where the physics of the proton self-modulation in the plasma cell will be tested. Next year, the electron source and the electron beam line will be installed to then test the injection of electron beam and its effective acceleration through the plasma.