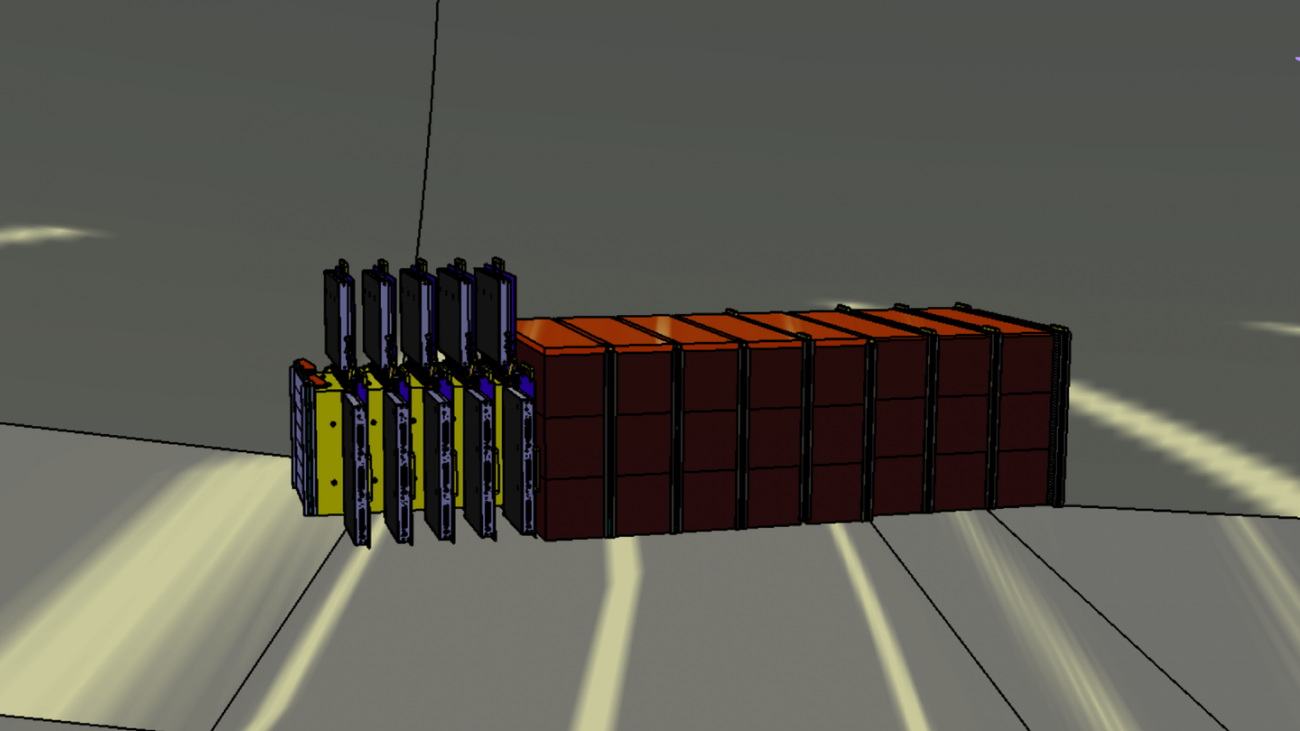 SND@LHC is a newly proposed, compact and stand-alone experiment to perform measurements with neutrinos produced at the LHC in a hitherto unexplored pseudo-rapidity range of 7.2 < 𝜂 < 8.6, complementary to all the other experiments at the LHC, including FASER.

Today, two effects make it possible and particularly interesting to construct and operate a compact neutrino detector at the LHC. The high luminosity of proton-proton collisions achieved by the machine lead to a large neutrino flux in the forward direction, and the high neutrino energies imply relatively large neutrino cross-sections. As a result, even a detector with a relatively modest size to fit into one of the existing underground areas has a significant physics potential. Machine-induced backgrounds decrease rapidly with increasing distance from the interaction point and away from the beam line. A detailed study of a possible underground location for a neutrino detector was conducted in 2018 [1], during the LHC Run 2. Four locations were considered to host a possible neutrino detector and the potential sites were studied on the basis of expected neutrino rates, flavour composition and energy spectrum, predicted backgrounds, and in-situ measurements performed with a nuclear emulsion detector and radiation monitors. TI18 emerged as the most favourable location. The FASER collaboration [2] in 2019 proposed to extend its physics case to also measure neutrinos with a dedicated detector, FASER𝜈 [3], located in the TI12 tunnel, on the opposite side of the ATLAS interaction point (IP1). The FASER𝜈 location is on the collision axis at 𝜂 > 9. The role of an off-axis setup, like the one of SND@LHC, was emphasised in a recent paper [4].

The SND@LHC Collaboration submitted to the LHCC a Letter of Intent in August 2020. Following the LHCC recommendation, the Collaboration prepared a Technical Proposal [5] that was submitted in January 2021, now under review by the LHCC. The first phase aims at operating the detector throughout Run 3 to collect a total of 150 fb-1. With data from Run 3, SND@LHC will be able to study more than one thousand high-energy neutrino interactions.

In the pseudo-rapdity range explored by the experiment, electron neutrinos and anti-neutrinos are predominantly produced by charmed-hadron decays. As a result, SND@LHC is capable of measuring charmed-hadron production indirectly through the observation of electron neutrinos and anti-neutrinos. The performance studies show that the charmed-hadron production in the SND@LHC pseudo-rapidity range can be determined with an accuracy of 35%. This result will be used to constrain the gluon parton density function in an unexplored region of very-small x. This is of particular interest also for experiments operating at future larger accelerators where this regime is relevant.

Figure 1. Drawing showing the proposed location of the SND@LHC experiment.

SND@LHC will have unique sensitivity in the search for Feebly Interacting Particles (FIPs) via signatures of scattering in the detector neutrino target. In particular, when compared to current limits, the experiment will improve the sensitivity to dark matter through scattering off nucleons by one order of magnitude in the dark matter mass range between 100 MeV/c2 and 2 GeV/c2.

The experiment is to be located 480m downstream of IP1 in the unused TI18 tunnel (see Fig.1). The upstream part of the detector consists of a neutrino target volume composed of 800 kg of tungsten plates interleaved with emulsion films and electronics tracker planes based on scintillating fibres. The emulsion acts as vertex detector with micrometric resolution while the electronic tracker provides the time stamp to the interactions. Together they also act as a sampling electromagnetic calorimeter. The target volume is followed immediately downstream by planes of scintillating bars interleaved with iron blocks acting as a hadron calorimeter and a muon identification system (as shown in the top figure of this article). The complete configuration allows efficiently distinguishing between all three neutrino flavours, opening a unique opportunity to probe physics of heavy flavour production at the LHC in the region that is inaccessible to ATLAS, CMS and LHCb.

The SND@LHC schedule assumes project approval in March 2021 and start of data taking in 2022. On the longer term, the Collaboration intends to continue detector R&D in order to develop a system that could also operate at the HL-LHC. In addition to collecting significantly more statistics, the aim is to investigate the possibility of performing measurements in the range of pseudo-rapidity ~4 - 9 to overlap with LHCb, in order to constrain the heavy-flavour production, and so expand the physics programme with more complete measurements of neutrino interactions of all flavours.