Exotic radioactive molecules could reveal physics beyond the Standard Model 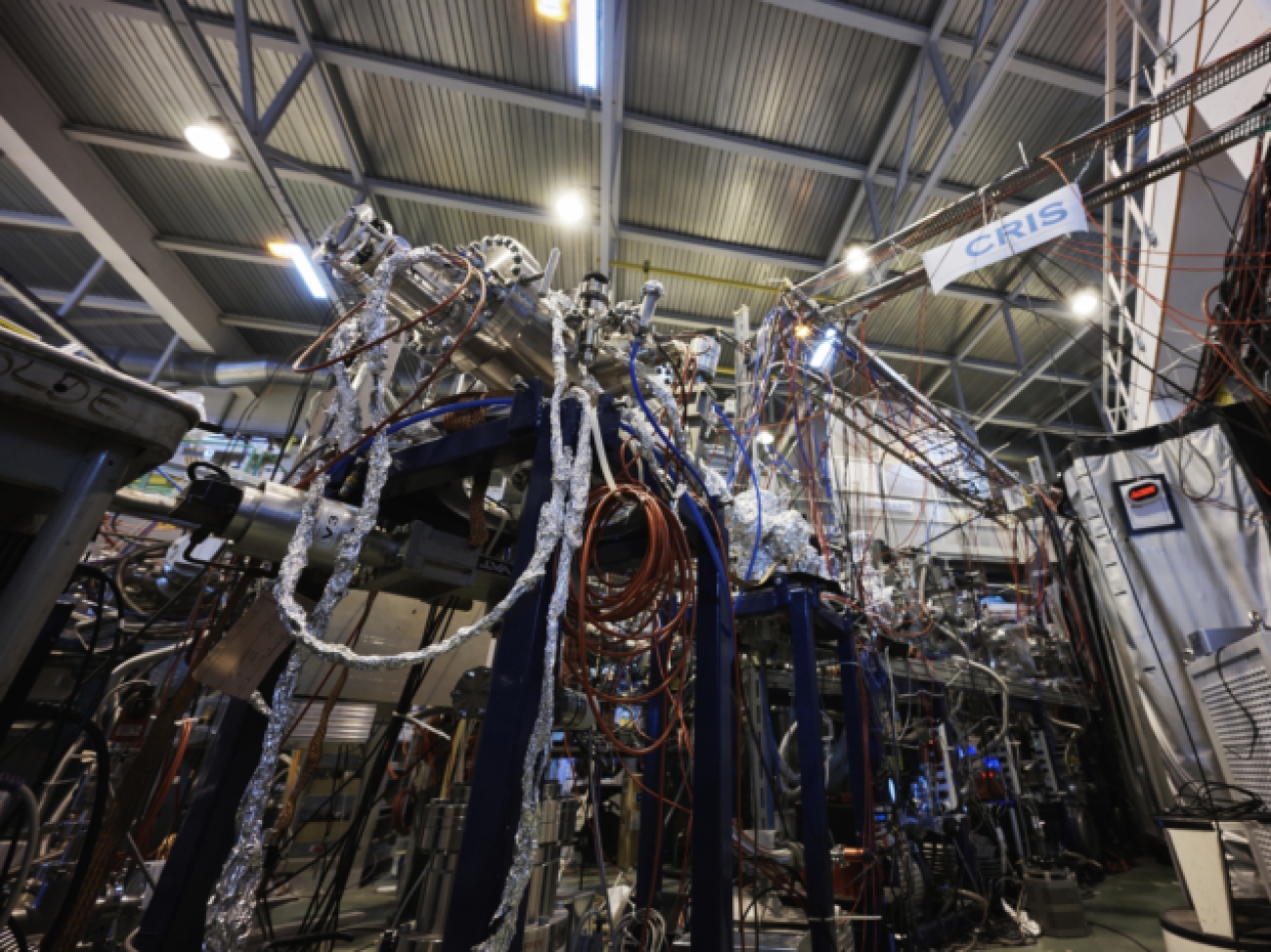 The first spectroscopic study of radium monofluoride (RaF) suggests that these radioactive molecules can be used to perform high precision tests of the Standard Model of particle physics. The study was done at ISOLDE, CERN’s radioactive beam facility, by an international team of physicists and chemists, under the leadership of former Research Fellow Ronald Garcia Ruiz, now assistant professor at MIT.  The experiment was performed just before CERN’s Long Shutdown in December 2018, using long-lived radioactivity extracted from an earlier irradiated MEDICIS target, and first results were published in Nature [Garcia]. 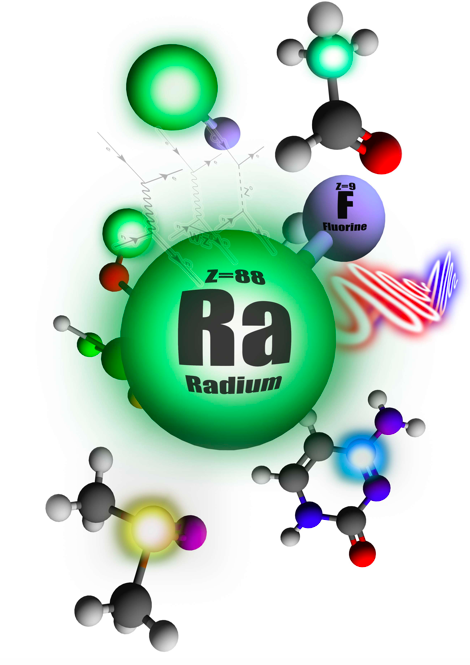 Due to the unique pear-shape of some specific radium isotopes discovered also at ISOLDE [Gaffney], all of which are radioactive, these atoms are particularly sensitive to the violation of symmetries in the Standard Model of particle physics [Safronova]. When such radium atoms are then embedded in a molecule such as RaF, the sensitivity is even more enhanced by several orders of magnitude, as demonstrated theoretically by co-spokesperson of the project, Robert Berger from Philipps-University Marburg, Germany [Isaev].  Thus, these radium monofluoride molecules are highly sensitive probes to look for New Physics beyond the Standard Model and learn more e.g. about why there is more matter than antimatter in the universe.

Although it was known theoretically that these molecules possess properties that would allow to put a new upper limit on the electric dipole moment of the electron for example, no-one was able to produce the (all radioactive) molecules of RaF, until Berger met Garcia Ruiz at CERN in Autumn 2017.  Together with the CRIS (laser spectroscopy) team of which Garcia Ruiz was the local coordinator, they prepared a proposal to produce these molecules for the first time with the help of the ISOLDE target ion-source team, and to identify them using the MR-TOF mass spectrometer with help of members of the ISOLTRAP team. They were even more ambitious, and proposed to also study the molecular spectroscopy for the first time, using the newest experiment at ISOLDE: the CRIS Collinear Resonance Ionization Spectroscopy set-up. To enhance the probability to find a resonance signal they used some extra lasers from the RILIS laser ion source team, in order to allow for laser scans in 6 different frequency ranges simultaneously.  This high-risk high-gain experiment was approved in the January 2018 INTC meeting, but beam time was not allocated during the ISOLDE running period with protons, as priority was given to experiments requiring very short-lived (down to few milliseconds) isotopes.  Instead, a MEDICIS target (copy of an ISOLDE target) was irradiated in parasitic mode during one of ISOLDE’s experiments in October 2018. The RaF experiment was then performed after protons stopped, in December 2018, just before the start of LS2.

The combination of expertise from many different ISOLDE teams and the on-line support of the quantum chemistry theory colleagues, has led to the success of this very challenging experiment, which will open up a completely new field of research in the coming years at ISOLDE (and at other radioactive beam facilities around the world), aiming to reach the precision needed to observe New Physics through the study of radioactive molecules. Radioactive molecules are not only more sensitive to symmetry violation effects, they can also be tuned to be sensitive to specific effects by choosing a specific isotope in the molecule.

Garcia Ruiz and colleagues used the following method to obtain their results. After producing radioactive radium isotopes by firing protons from CERN’s Proton Synchrotron Booster on a room temperature uranium carbide target, the target was stored for several weeks.  After the ISOLDE running period with protons had stopped, the target was mounted on one of ISOLDE’s target stations and heated to 1300 degrees, in order to release the radioactive isotopes (with several days/months half life) that were produced previously. The radium monoﬂuoride ions were formed by surrounding the target with carbon tetrafluoride gas. The team then accelerated the ion beam to 40 keV and isolated radium fluoride ions containing a specific isotope of Ra by exploiting the same principles that separate ions in mass spectrometry. In order to verify that the correct isotopologue of RaF+ was produced and selected, e.g. containing the 225Ra isotope, the ion beam was send to the ISOLTRAP beam line where the molecular mass was measured using an MR-TOF with a relative precision of the 10-6, uniquely identifying the molecule.

Once identified, the ion beam was sent through the ISOLDE ion cooler buncher (a gas filled linear Paul trap called ISCOOL) to produce packages of molecular ions cooled to room temperature. These were sent into the CRIS (Collinear Resonance Ionization Spectroscopy) beam line, where they first passed  through a chamber filled with sodium gas.  The positively charged molecules are neutralized there by capturing an electron from the Na vapor.  This neutral molecular beam is then overlapped with laser pulses to add energy, raising the radium fluoride’s electronic energy stepwise and in a resonant way, and ultimately ionising it again. The newly positively charged molecular ion can then be deflected into a detector, away from any remaining neutral background particles. Tracking how many ions reach the detector at different laser wavelengths gives the scientists radium fluoride’s excitation spectrum.

Figure 1: Radioactive radium isotopes were created by impinging 1.4-GeV protons from the CERN Proton Synchrotron Booster (PSB) on a uranium carbide (UCx) target. Radium monofluoride cations (RaF+) were produced by passing tetrafluoromethane (CF4) gas through the activated UCx target at 1300 oC. Molecular ions were extracted from the source, mass-selected, and injected into a helium-filled radio-frequency trap, where they were accumulated for 10 ms. Bunches of molecular ions were extracted and neutralised in-flight by charge exchange with neutral Na atoms. Neutral RaF molecules were overlapped with different laser beams in a collinear geometry. Resonantly reionised molecules were deflected onto a particle detector. The resonance ionisation scheme is shown on the top right. Molecular orbitals are shown schematically.© Springer Nature.

Producing and studying radium fluoride like this is an important intermediate result, because the observed excitation spectrum of RaF confirms the theoretical prediction, that laser cooling can be efficiently applied.  Furthermore, the exact laser frequency to realize this laser cooling has now been determined experimentally.  Laser cooling, a process where molecules absorb and re-emit photons and slow down to extremely low velocity (and thus temperature) close to the absolute zero value, enable scientists to perform ultra-high precision spectroscopy, a must to search for New Physics, in a very complementary way to searches for New Physics using the LHC experiments at CERN. 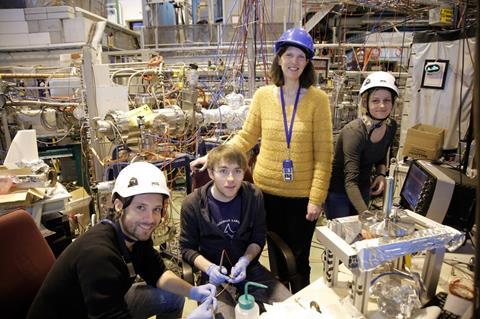 The method presented in this study is the first step in that direction.  It is a versatile method that can be applied to different isotopes and molecules, having lifetimes as short as a few milliseconds, allowing for the productions of molecules containing isotopes that are tailored to enhance the sensitivity to specific types of symmetry-breaking interactions.

Figure 3: Measured vibronic absorption spectra for the A2Π1/2 ← X2Σ+ transition are shown for the isotopologues 223RaF, 224RaF, 225RaF, 226RaF and 228RaF. Wavenumber values are relative to the transition (0, 0) of 226RaF. Credits: ISOLDE collaboration. © Springer Nature.

In addition to their potential in exploring fundamental symmetries, molecules made of short-lived isotopes can be highly abundant in space, for example in supernovae remnants or in the gas ejected from mergers of neutron stars.  It will now be possible to provide the astrophysicists with experimental spectroscopic data to identify the presence of such molecules in space, rather than them counting on theoretical calculations only.

“Our measurements demonstrate that radium monofluoride molecules can be chilled down to temperatures that would allow researchers to investigate them in extraordinary detail,” says principal investigator Ronald Garcia Ruiz. “Our results pave the way to high-precision studies of short-lived radioactive molecules, which offer a new and unique laboratory for research in fundamental physics and other fields.”