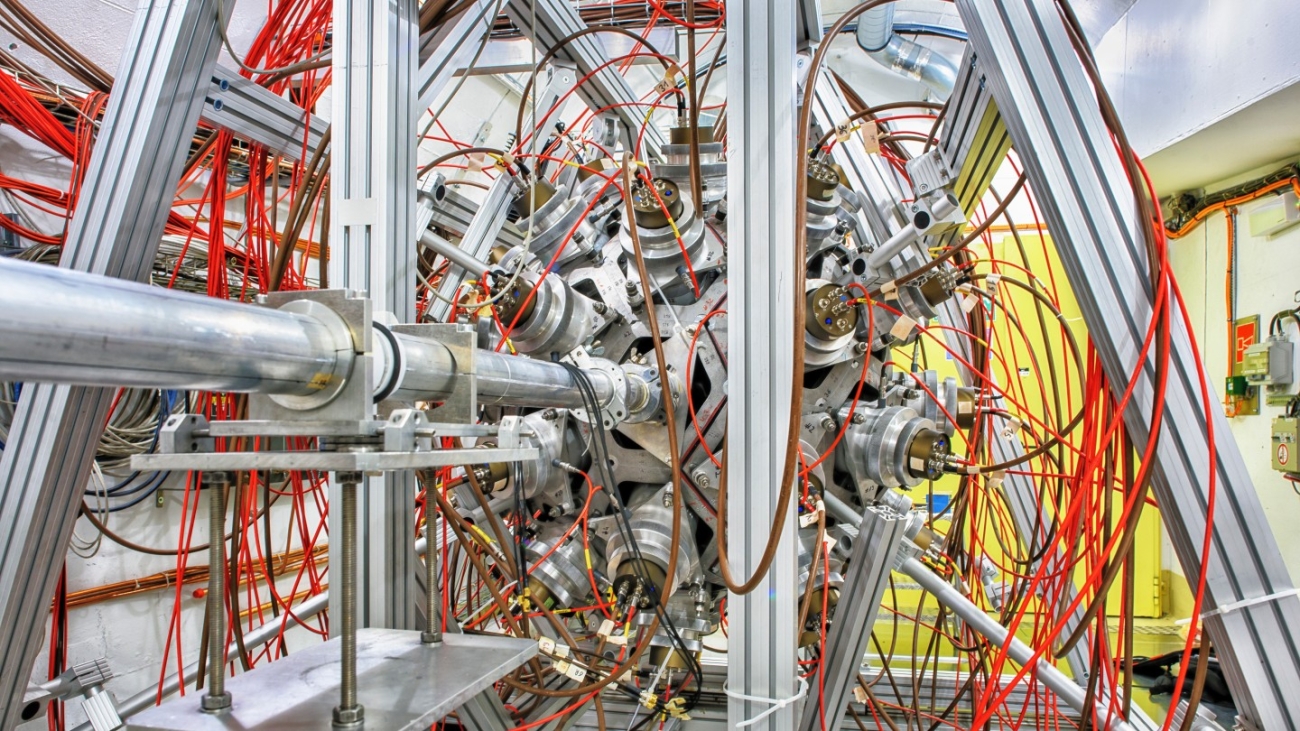 The outcome of the first year of data-taking after LS2 [1] was fruitful for n_TOF. The long beam-on period, along with the establishment of a third experimental area, the NEAR Station, resulted in a wealth of new experimental data taken at the facility. Thanks to the excellent beam conditions provided by the PS teams, the performance of the new spallation target [2] and the efforts of n_TOF research groups, we managed to have a very successful year of operation.

During the 2022 n_TOF campaign, nine neutron capture reactions of special interest for nuclear astrophysics, nuclear energy and medical applications were studied in the two TOF experimental areas (EAR1 & EAR2). In these studies, two new detection setups were successfully employed for the first time. Reliable and accurate experimental data were produced for all these physics cases. For two of the measurements, 79Se(n,γ) & 94Νb(n,γ), n_TOF provided the very first set of experimental data ever measured for these reaction channels [3,4].

The longest and one of the most interesting and challenging campaigns of the n_TOF 2022 data taking period has been the measurement of the neutron capture cross section of the 239Pu and the determination of the capture to fission ratio [5].

239Pu plays a central role in the design and safe operation of thermal as well as of fast reactors, for presently used technologies as well as for advanced concepts of nuclear power systems (Generation-IV reactors, Accelerator Driven Systems, and others). To get a flavor of the importance of this study, a comparison of the fission cross section of Pu-239 and that of the commonly used U-235 nuclear fuel is shown in Figure 1. Accordingly, there is a pressing need for more accurate 239Pu capture and fission cross section data. This is a challenging measurement due to the specific activity of the sample material (~2MBq/mg) as well as the strong competition between the neutron capture and neutron-induced fission reaction channels, operating at the same time in the neutron-induced reaction processes. Despite the known difficulties for a project of this type, the n_TOF Collaboration decided to simultaneously measure the neutron-induced capture and fission rates for 239Pu for an extended energy range (thermal – 10 keV). As for all the experiments performed at the n_TOF facility, the project was endorsed by the INTC committee and approved by the Research Board.

Figure 1: Comparison of the fission cross section of Pu-239 and U-235. In a wide neutron energy range, the Pu-239 fission process is prevalent with respect to the one of the commonly used U-235.

The measurement has been performed with  the Total Absorption Calorimeter (TAC) at the n_TOF first experimental area  EAR1. The γ-rays from the fission and capture events were recorded using the TAC (Figure 2) and identified according to the Q value of the capture reaction (neutron separation energy). Through the fission tagging technique, the fission related γ-rays can be identified and distinguished against those generated by neutron capture events. Fission events were recorded by means of a new, specifically-designed low volume fission chamber coupled with fast signal processing electronics. The chamber was designed and fabricated at the University of Lodz, Poland. This chamber can accommodate 10 samples – of 1 mg of material each – coupled with an equal number of detection plates. In this way, the fission events are detected with ~92% efficiency. Adjusting the data analysis in singles, coincidence and anti-coincidence events between the TAC and the fission chamber, the (n,γ) to (n,f) cross section ratio can be determined. The combination of fission chamber and TAC can provide high accuracy data and excellent signal to background ratio up to the energy of ~ 1keV.

To extend the range of the measurements with respect to the neutron capture measurement up to 10 keV, a second configuration was adopted that provided better signal to background ratio for capture events in this energy region. In this additional setup, a thick encapsulated Pu-239 sample of ~100 mg (330 MBq) was used, without the fission chamber.

In addition to the aforementioned challenges, within a short period of time many new developments– all part of the experimental setup - had to be designed, fabricated, and tested to establish fully operational conditions during the actual measurement. Furthermore, special care had to be taken on the data flow and data processing, considering a rate of the order of 1TB/h had to be handled. Beside these difficulties, as can be seen in Figure 3, from the preliminary data analysis, it is clear that capture events can be easily identified against the fission events thanks to the fission tagging technique. 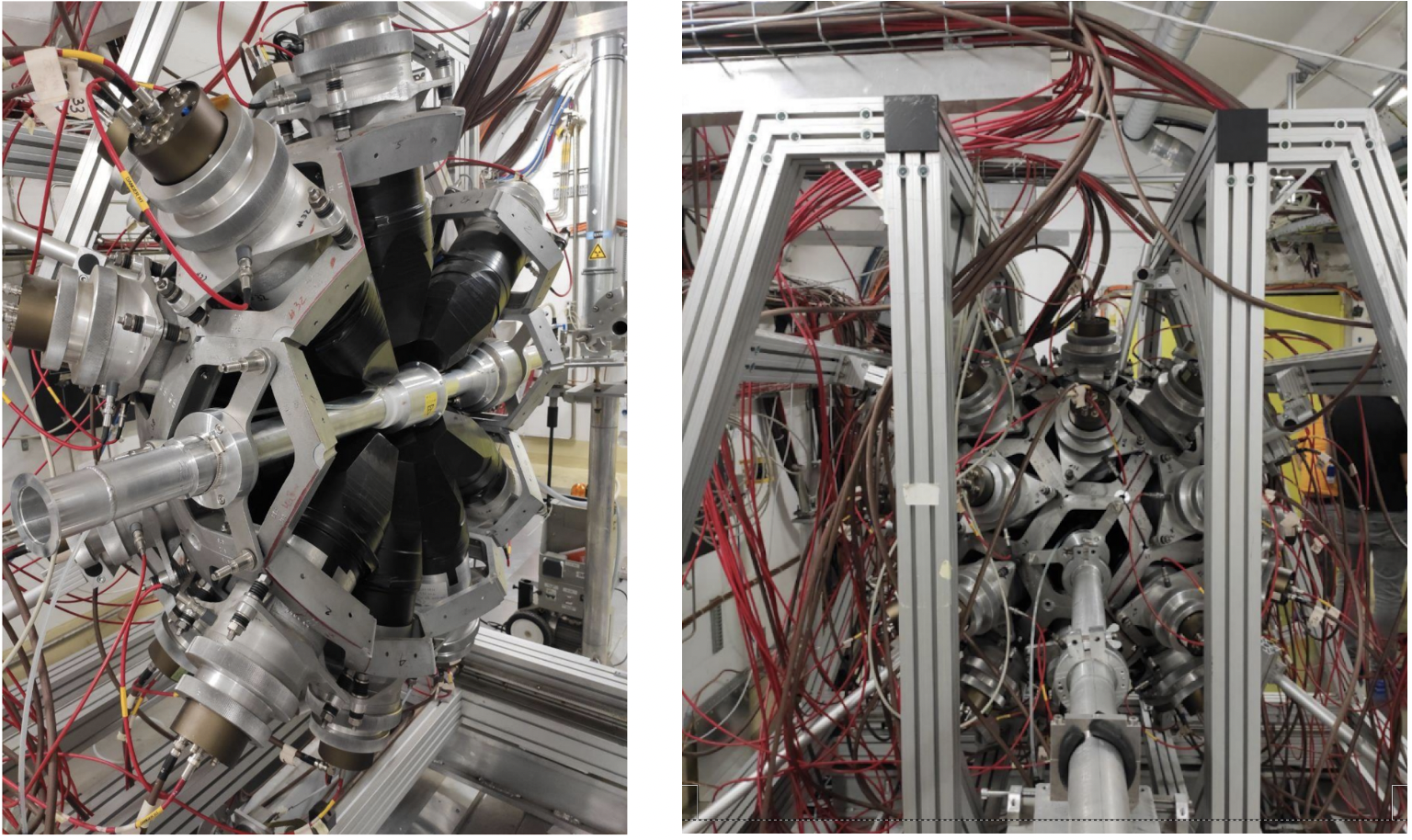 Figure 2: The n_TOF Total Absorption Calorimeter (TAC). On the left panel, the TAC is open and the newly developed fission chamber can be seen. The right side is a picture of the closed TAC.

As an example of the importance of this measurement the pronounced discrepancy between two major databases with respect to the strength of the 95.5 eV resonance intensity is depicted in Figure 3. As can be seen, this discrepancy can be resolved by considering the 2022 n_TOF experimental data information. 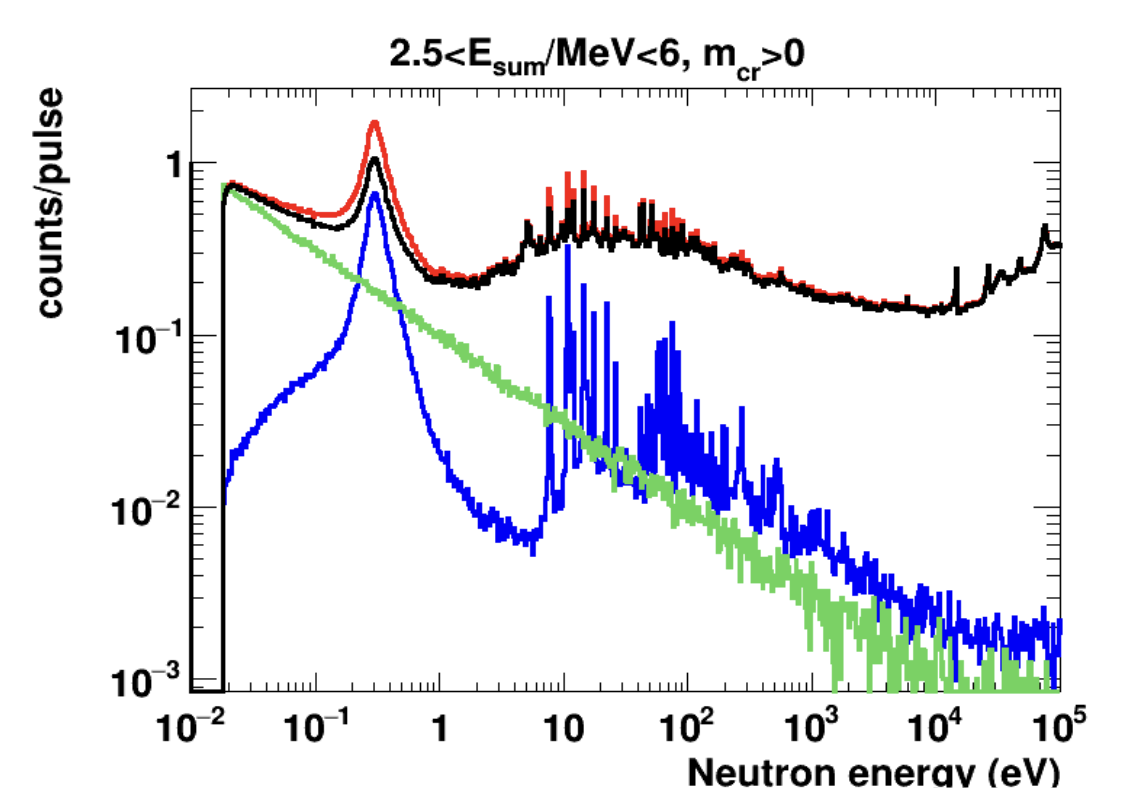 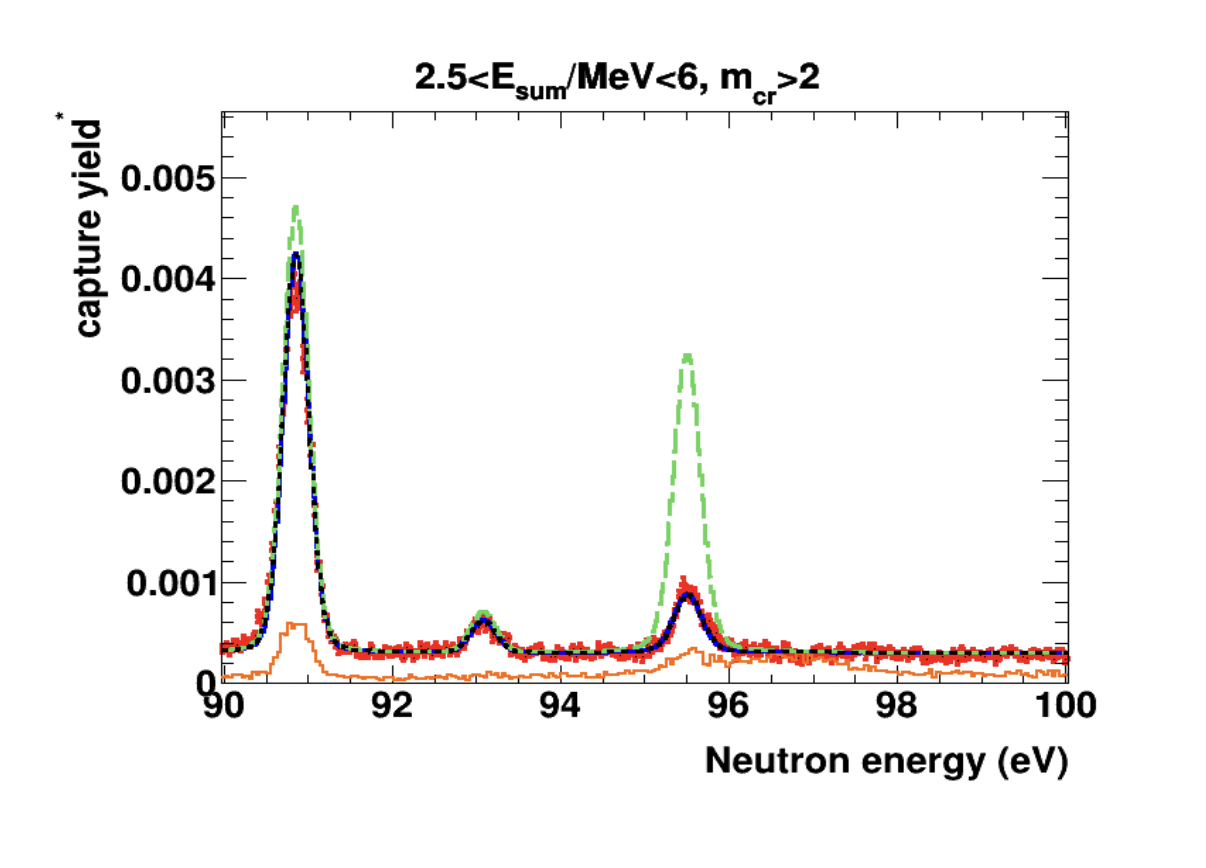 Figure 3: Preliminary counting rate yield at TAC with the condition the total recorded energy to be higher than 2.5 MeV and lower than 6 MeV. The red color corresponds to the total yield, the blue corresponds to the recorded counts in coincidence with one fission event and the black color is the difference between the total and fission yield (red-blue). The green color corresponds to the beam off background (top). The neutron capture yield is calculated considering the JEFF-3.3 (green) and ENDF/B-VIII.0 (blue). In the same plot preliminary n_TOF data are given for the capture rate (red) and the fission rate (orange) (bottom).

The 239Pu campaign was finalized successfully on the 14th of November and the data analysis process is already taken over by the CIEMAT/Spain n_TOF group. In addition to the Pu-239  measurement, in the new n_TOF  experimental area – the NEAR station –, five neutron capture reaction studies were successfully conducted by using different B4C filter thicknesses that shape the neutron energy spectrum according to different temperature Maxwellian distributions. 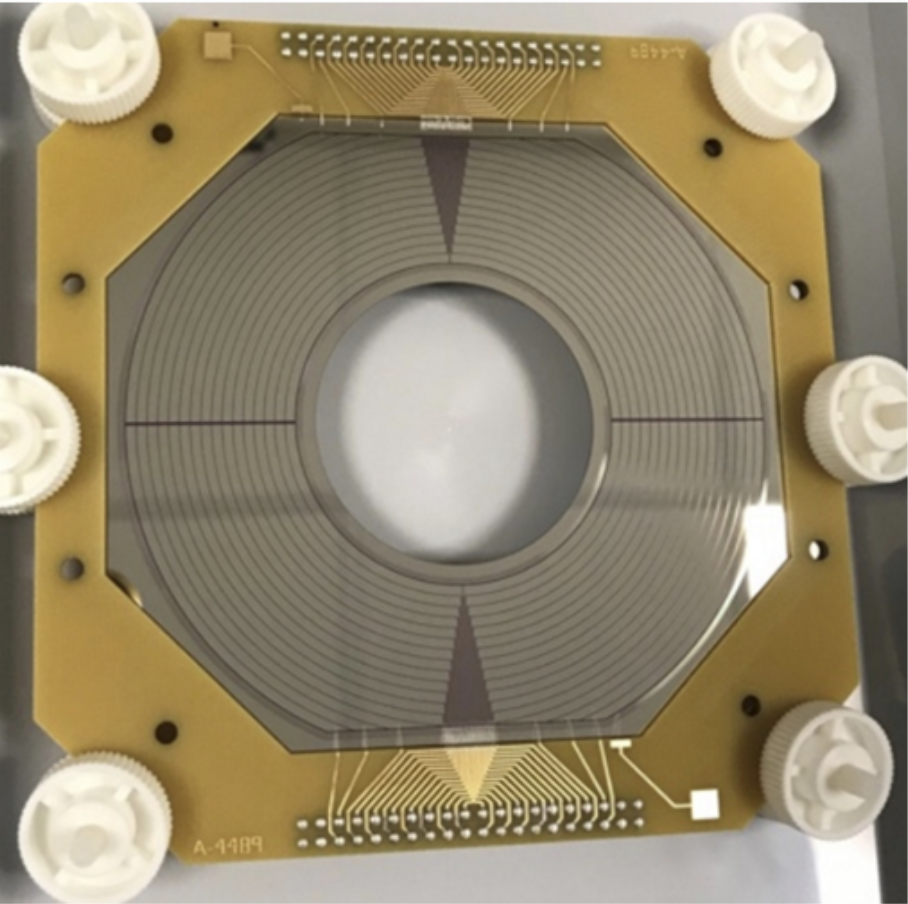 Figure 4 The first annular Neutron-Transmutation Doped (nTD) silicon strip detector that is going to be used for the study of (n,cp) reactions. The homogeneous electric field allows for particle identification through the pulse shaping technique. This is a double-sided Si strip detector with 16 stripes in four sectors in the front side and 16 sector segmentation in the back side.

In parallel with these physics measurements, during the n_TOF 2022 experimental campaign, five detector development projects were successfully accomplished and the n_TOF Collaboration is confident that new types of measurements will soon become accessible within n_TOF by exploiting the unique characteristics of our facility. A few examples of these detector development projects are the first tests of the Neutron-Transmutation Doped (nTD) silicon strip detectors (Fig. 4) and Double-Differential Charged-Particle Emission Cross Sections Setup (DDX) (Fig. 5). From the preliminary analysis of the first in-beam data, it was shown that at n_TOF we are now able to launch a systematic investigation of neutron-induced reactions, where one of the reaction products is a charged particle. The goal of (n,cp) reaction studies is the experimental determination of special reactions of interest for medical physics [6] as well as for energy applications and in particular for the fusion technologies [7]. 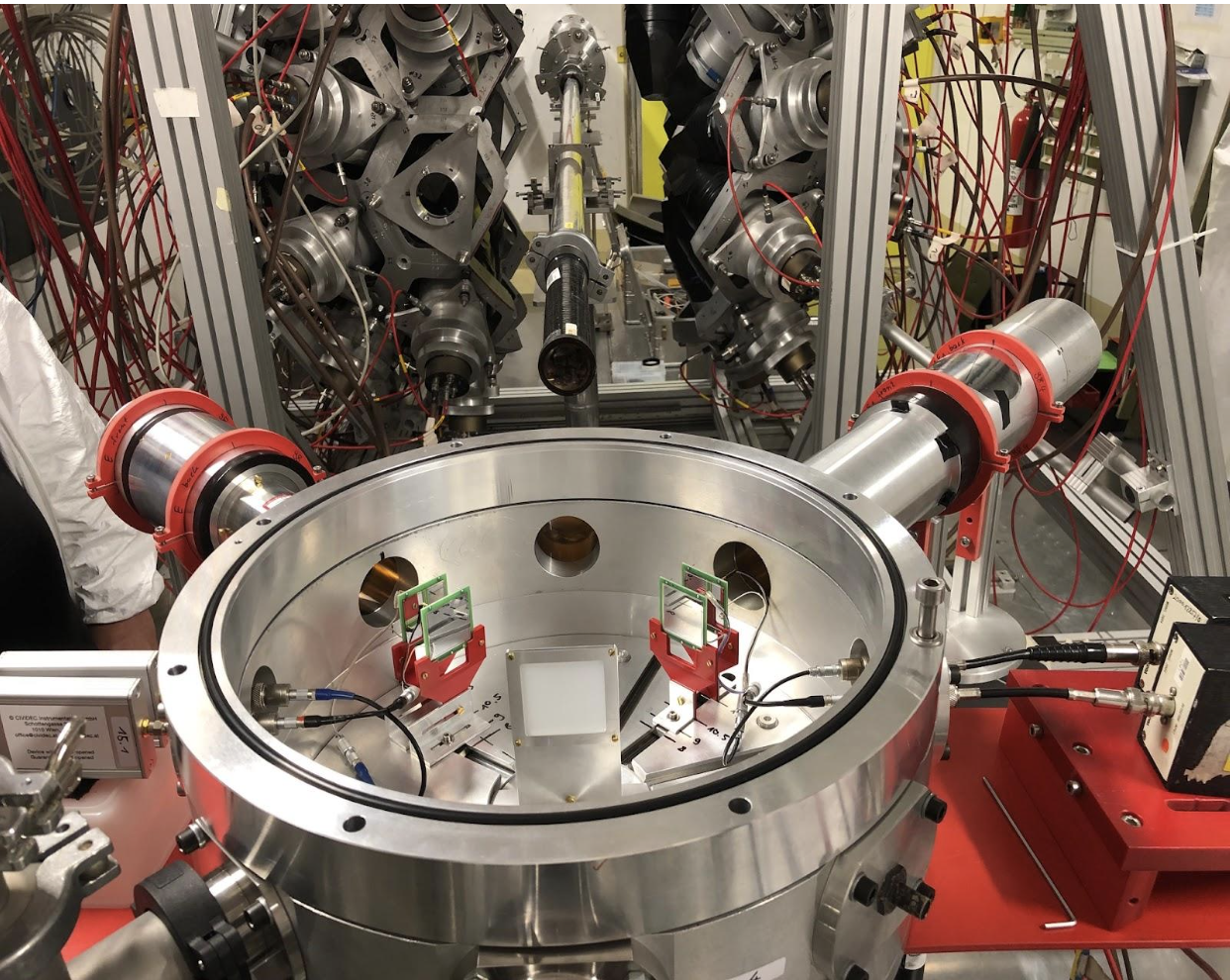 Figure 5: A picture of the Double-Differential Charged-Particle Emission setup during the first on-beam tests performed in EAR1. The scattering chamber is open and the different stages of the ΔE-E telescope can be seen.

2022 was definitely a successful year of operation for n_TOF. During the next months, within YETS, we are planning to finalize new detector developments, to improve the running conditions and existing instrumentation in our experimental areas as well as to accomplish the needed preparations for hosting the upcoming measurements of the 2023 n_TOF experimental campaign.