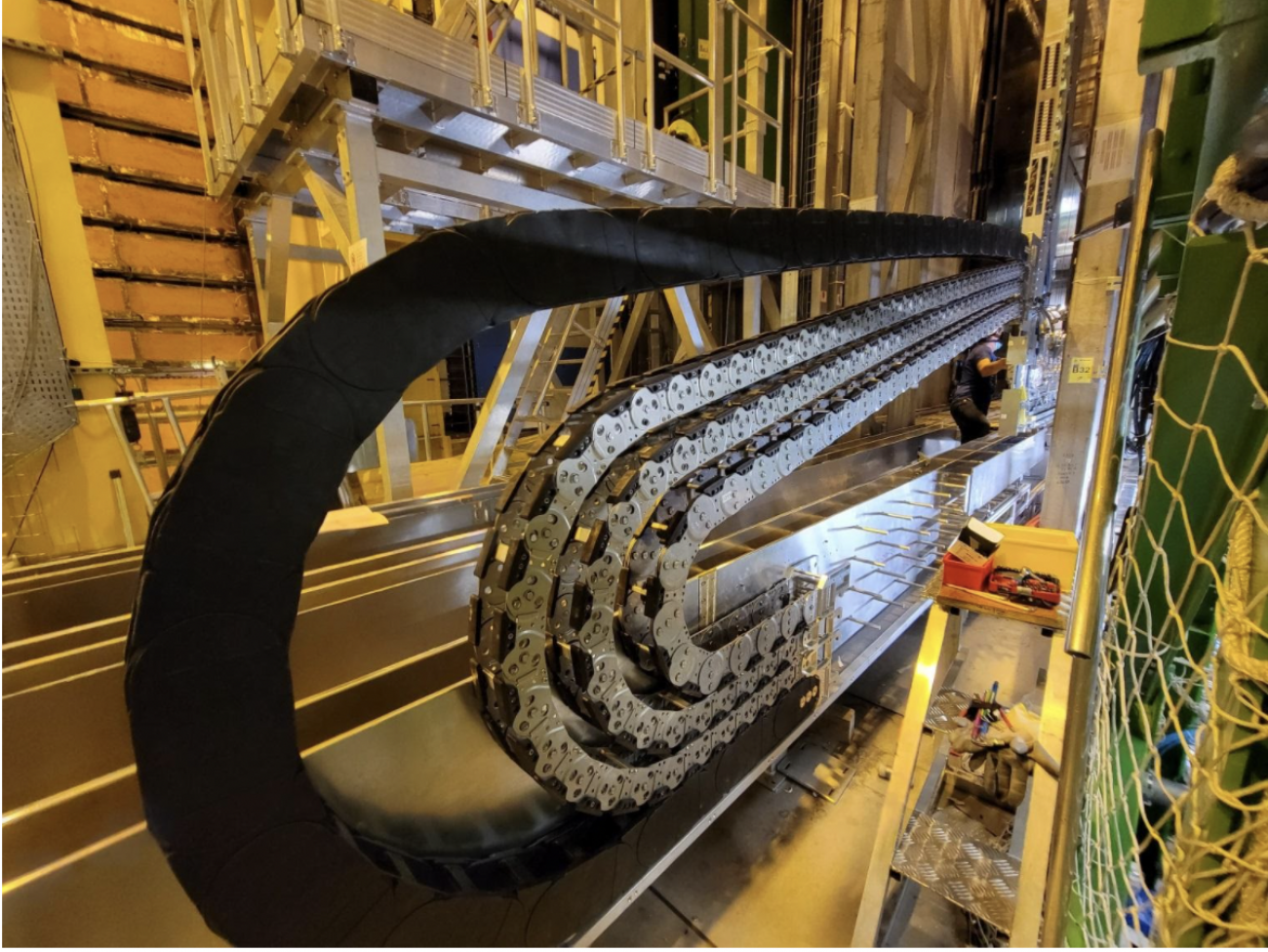 The LHCb SciFi tracker is the replacement of the Outer Tracker (based on gas straw tubes) and the Inner Tracker (Silicon microstrips) by a single detector technology (see also a previous EP newsletter article and a CERN Courier article). The detector consists of 3 tracking stations with 4 independent planes each (X-U-V-X, stereo angle ±5°) and extends over 6 m in width and 5 m in height and has a total active surface of 340 m2. The mechanical structures supporting the detector form  a C-shape from each side of the beam pipe as shown in Figure 1 and are  therefore named C-frames. 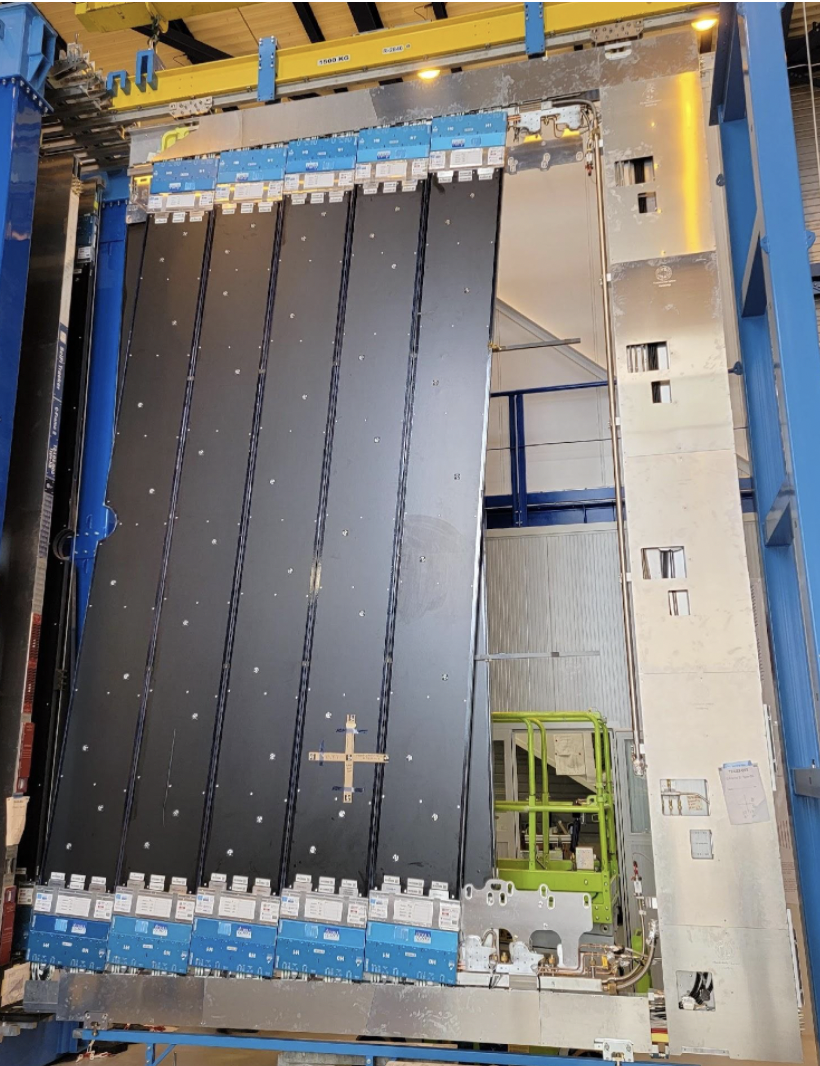 Figure 1. Fully assembled C-frame during the final survey in the SciFi assembly hall.

The 2.5 m long blue emitting scintillating plastic fibers of 250 µm diameter are arranged in a staggered close-packed geometry to 6-layer fiber mats. One end of the fiber is fitted  with a mirror and the scintillation light exiting at the other end is detected by linear arrays of SiPM detectors (128 channels of 0.25 x 1.6 mm2 size).

The assembly of the SciFi detector started in 2018 at CERN after several years of R&D and construction of parts around the world. The assembly had just become routine with the first 4 of 12 C-frames assembled when COVID forced a dramatic change of pace and planes. Most of the LHCb SciFi community could no longer come to CERN and the assembly was at an almost standstill until the spring of 2021. This delay jeopardized one of the main milestones for LHCb SciFi: Installation of half the detector (6 C-frames) before the last date for installation of the LHC beam pipe in  the LHCb experiment. To understand how critical this deadline is, it is necessary to understand how the LHCb SciFi detector is installed: The LHCb cavern is not large enough to lift the ~6 m tall C-frames over the beam pipe. The only way to install is therefore to slide the C-frames from the open side of the LHCb detector over the beam pipe position up to the final position of the C-frames. In this way,  when the beam pipe is installed, it will no longer be possible to install SciFi C-frames on the far side.

The LHC beam pipe inside LHCb is naturally critical to get LHC ready for beam and the latest date for the beam pipe installation was determined to be in early August. There were several critical paths to have SciFi ready in time. First of all, the 6 C-frames needed to be assembled and tested. The SciFi team pulled together and every person who was able to be at CERN worked intensively both on their own parts and to help/assist with the (commissioning of the)parts on behalf of our colleagues  who could not travel to  CERN. This involved mechanical work, installation of a scintillating fiber modules, cabling, installation of hundreds of fibers, testing, commissioning,  debugging etc. Eventually all the C-frames  were assembled and tested in early July. The final step was to make photogrammetry, where photos are combined and used to determine the flatness of the active area of the detector. This is done with reflective marks installed on the active area of the detector. The marks are visible in Figure 2.

Besides the C-frames many other tasks were also needed to be ready to install the far of the detector. All the cables going to the detector needed to be made and installed. Some complex cables like for the flowmeters were partly made (connector in the detector end only with the rack end being made after the cable installation) at CERN stating a year earlier, while others like low voltage was simple and made in the weeks before installation. Bellows for water, dry gas and NOVEC/vacuum were made at companies around Europe stating about half a year before. For SciFi the cable installation is a particularly difficult challenge since C-frames are moveable to allow maintenance, which means that a cables needs to arrive to the detector through a moveable cable chains. Due to the large complexity and many services needed for the SciFi detector 4 moveable cable chains are needed per C-frame.

Figure 2. Four cable chains without cables connected to a prototype C-frame for a movement test. The photo is from the near side installation (on the far side there is too little space to get good overview photos).

On the far side of the LHCb detector there is unfortunately not enough space to stretch out the cable chains while they were being filled with cables. Therefore the chains were positioned in an L-shape as shown in Figure 3.

The top end of the cable chains is the end that will be connected to the C-frames. The 6 x 4 cable chains were installed in L-shape by the end of April.

The SciFi detector needs many services to operate and those also needed to be ready for the far side installation. The SiPMs had to be cooled down to -40 °C to reduce noise introduced by radiation. The new SciFi detector is using a one phase cooling with a new environmental friendly liquid called NOVEC 649. Due to space limitations the distribution lines for the NOVEC are made with vacuum isolation. A fully redundant vacuum pumping system based on 2 primary scroll pumps and 4 molecular turbo pumps was therefore installed and commissioned before the installation of the far side detectors. Also dry gas, with corresponding monitoring of ~600 flowmeters, temperature monitoring /based on  ~800 sensors and powering and monitoring of ~250 heating wires are all necessary ingredients for the safe operation of the SciFi detector.  The corresponding infrastructure was developed and installed  hand in hand with the installation of the far side detectors. 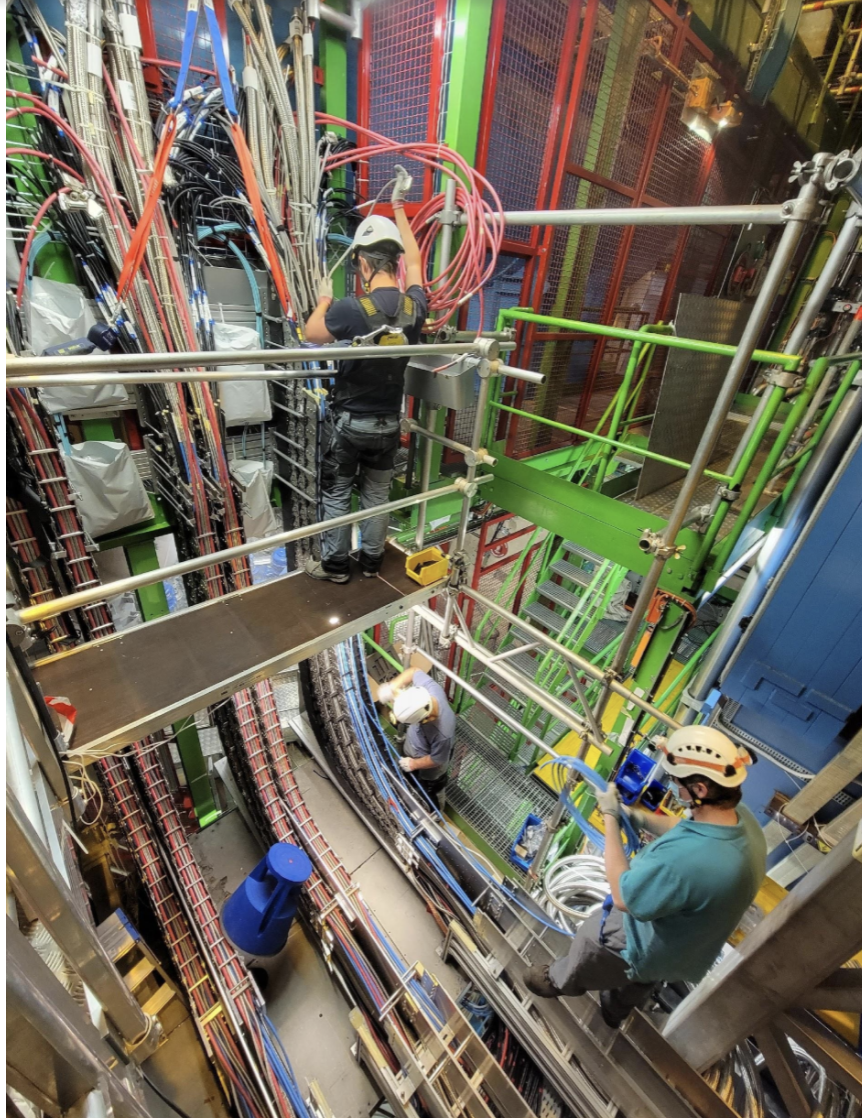 Figure 3. Cable chains in L-shape being filled with cables.

The C-frames were lowered into the cavern as shown in Figure 3 and installed in two rounds as the C-frame assembly progressed. In early May the first 4 C-frames arrived in the LHCb cavern. 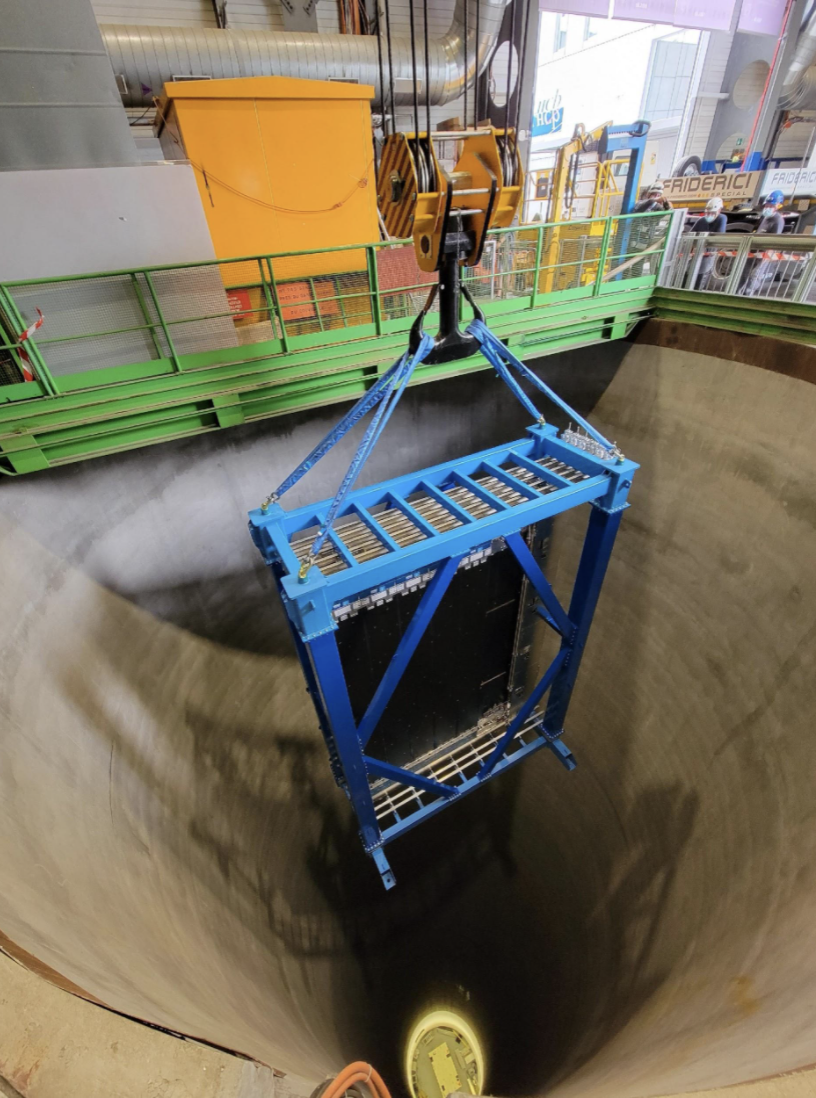 Figure 4. Tee 2 final C-frames for the far side being lowered into the LHCb cavern inside a transport cage.

The final 2 C-frames for the far side installation arrived at the LHCb cavern in the middle of July. Because the detector is practically preassembled, the installation itself was simply to insert the C-frames to the rails and push them to the far side.  Figure 5 shows the insertion of the first C-frame.

Figure 5. Insertion of the first C-frame.

Next followed an alignment to position all the frames correctly compared to the cavern and the beam pipe.

The final big step before the beam pipe installation was to get the cable chains connected to the C-frames. This was done using a hoist to support the chain and with several people involved to ensure that the chain is aligned correctly to the C-frame while it is being secured as shown in Figure 6. All the cables arriving into the C-frame then had to be/arranged to not violate the width of the frame and then be connected. 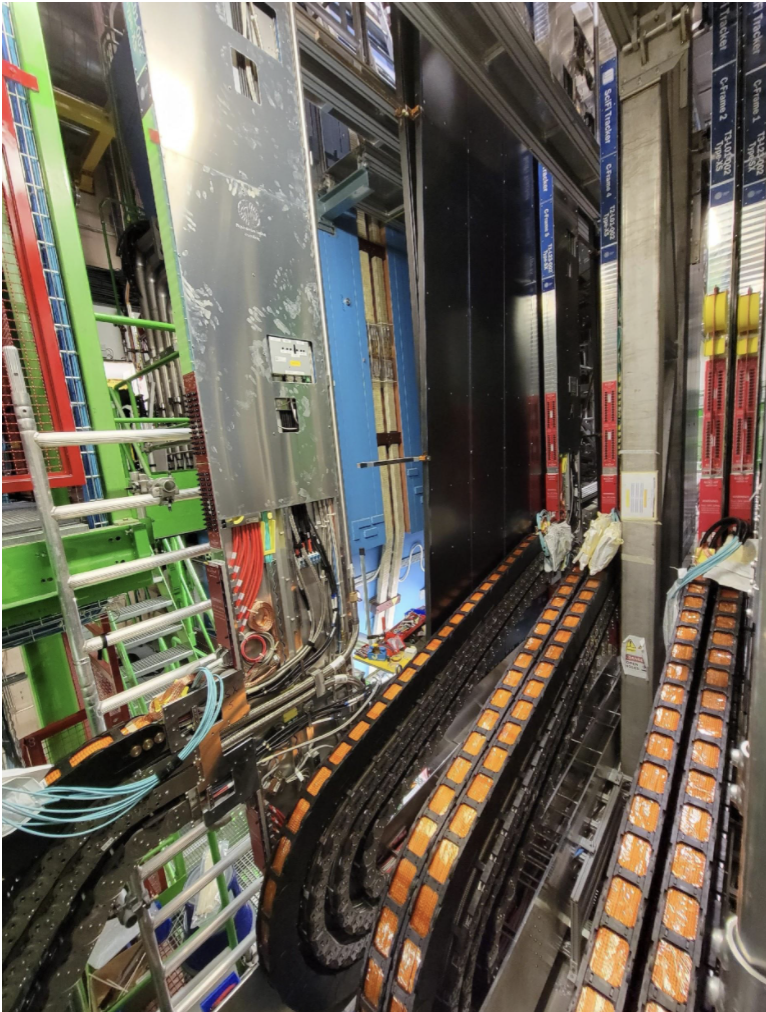 Figure 6. All C-frames for the far side with cable chains attached. One frame is pulled out to allow connection work.

The successful connection of the cable chain was the last step required before the beam pipe could be installed. The beam pipe installation started on schedule in late July. 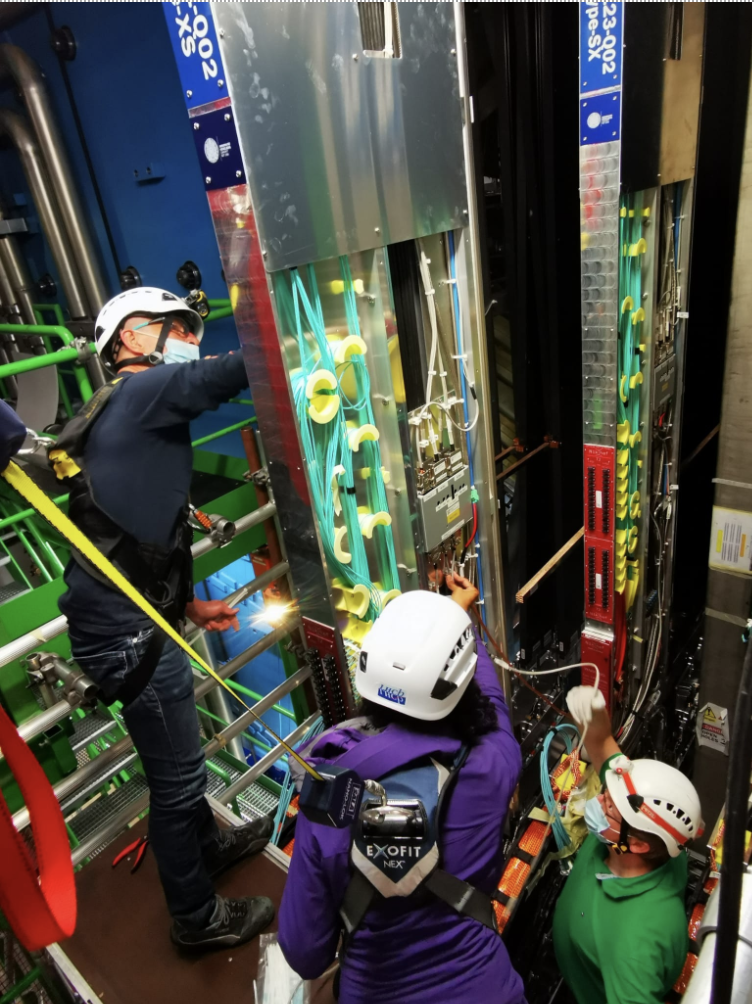 Figure 7. Cables from the cable chain being connected to a C-frame.

Today almost all cables and services have been connected to the far side C-frames. The water and NOVEC cooling systems have been filled and  circulating to cool down the electronics and the SiPMs of the detector. Dry gas is flushing around the SiPM and heating wires are getting connected to power to ensure that no condensation effects are present. Within the next few weeks, a few more cables have to be connected before powering up the detector for the first time and starting commissioning  the far side of the SciFi detector.

Meanwhile the 6 C-frames for the near-side are being assembled and tested and the corresponding cable chains and services are being prepared to get the full SciFi detector installed and operational on time for the start of LHC Run 3.