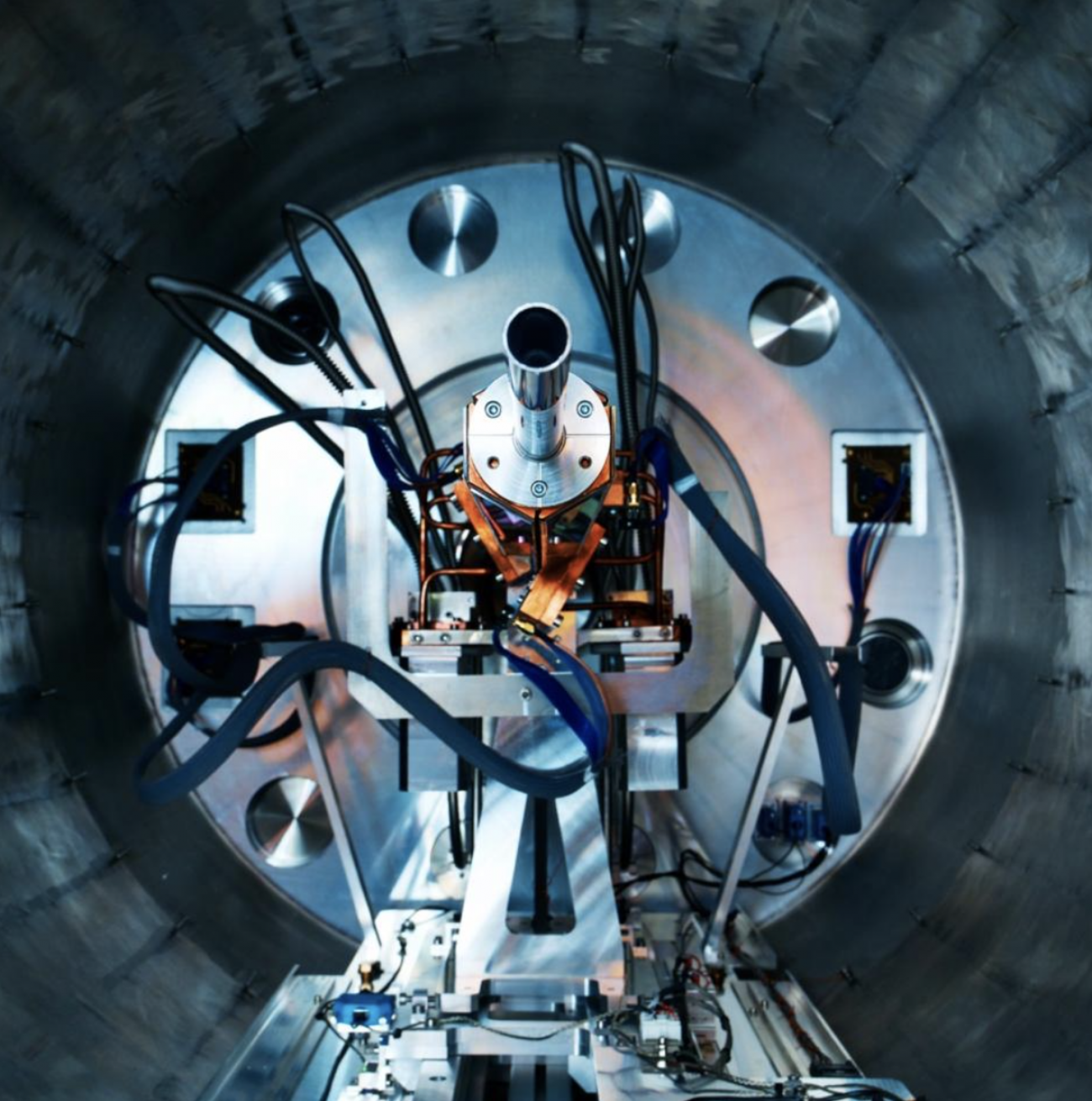 The majority of atomic nuclei exist away from the valley of beta-stability, so it is perhaps unsurprising that in studying them nuclear physicists have discovered emerging phenomena not seen in stable nuclei. Changing shell structure, evolving nuclear shapes, and weak-binding phenomena such as halo nuclei and neutron skins all test the current frontiers of nuclear theory and have highlighted the importance of different aspects of the nucleon-nucleon interaction, from the requirement to include the tensor interaction and 3-body interactions to development of the shell model. As we progress to study nuclei further from stability, new developments in technology are required; the most exotic nuclei are often produced in low yields at radioactive beam facilities such as ISOLDE at CERN. The efficiency of detector systems must be maximised to study nuclei produced at the lowest beam rates and improved particle-energy resolution is required to investigate nuclear systems with higher densities of states.

The ISOLDE Solenoidal Spectrometer (ISS) was fully commissioned in 2021 to study direct nuclear reactions that probe particular properties of exotic nuclei to test our understanding of fundamental nuclear interactions, nuclear structure and decays.

An important probe of the atomic nuclei are so-called direct reactions; these are processes that excite only a single degree of freedom within the nucleus. For example, single-particle properties can be probed via single-nucleon transfer, where a neutron or proton is transferred to or from a nucleus. Moreover, pairing properties can be probed/studied via two-nucleon transfer and collective properties investigated via inelastic scattering. In the past, these reactions were induced using light-ion beams on heavy targets, where the stable target nucleus was the subject of the study. To study radioactive nuclei, which are only available as secondary beams, these reactions are turned around in what is termed “inverse kinematics” where, as you may guess, the heavier radioactive nucleus we want to study becomes the beam while the light ion is the target.

These radioactive ion beams are produced at the ISOLDE facility using protons from the PS-Booster, impinged on thick isotope production targets. Beams of the exotic nuclei of interest are selected by their chemistry and mass, then extracted as ions and then accelerated by the HIE-ISOLDE super-conducting linear accelerator. These radioactive-ion beams are then used to bombard a light-mass target, such as one containing deuterium, where reactions take place. Measurement of the Q-value, inferred from the energy of particles emitted in the reaction, and their angular distribution of yield provides details on the excitation energy of the state populated in the residual nucleus and its angular momentum quantum number.

In the case of “inverse kinematics”, a key challenge is that the determination of the Q-value spectrum is deduced from the energy of the outgoing light particle (e.g. energies of states in 29Mg are determined by measurements of the outgoing protons from the 28Mg(d,p)29Mg reaction). As a result, the measurement suffers from kinematic effects in the laboratory frame of reference that limit the ability to resolve the individual states populated in the residual nucleus. The situation becomes particularly problematic as the centre-of-mass (CM) moves at a high velocity in the laboratory frame when a heavy projectile is incident on a light target. The resolution of a particle detector at a fixed angle becomes limited by two effects – kinematic shift and kinematic compression – which become very significant in inverse kinematics. A common mitigation is to determine the energy of the excited state by measuring the gamma rays that are emitted as it decays. However, some states do not decay electromagnetically such as the ground state or those that are unbound to particle emission. Moreover, the efficiency of gamma-ray detector arrays is restrictive when studying the most exotic isotopes. 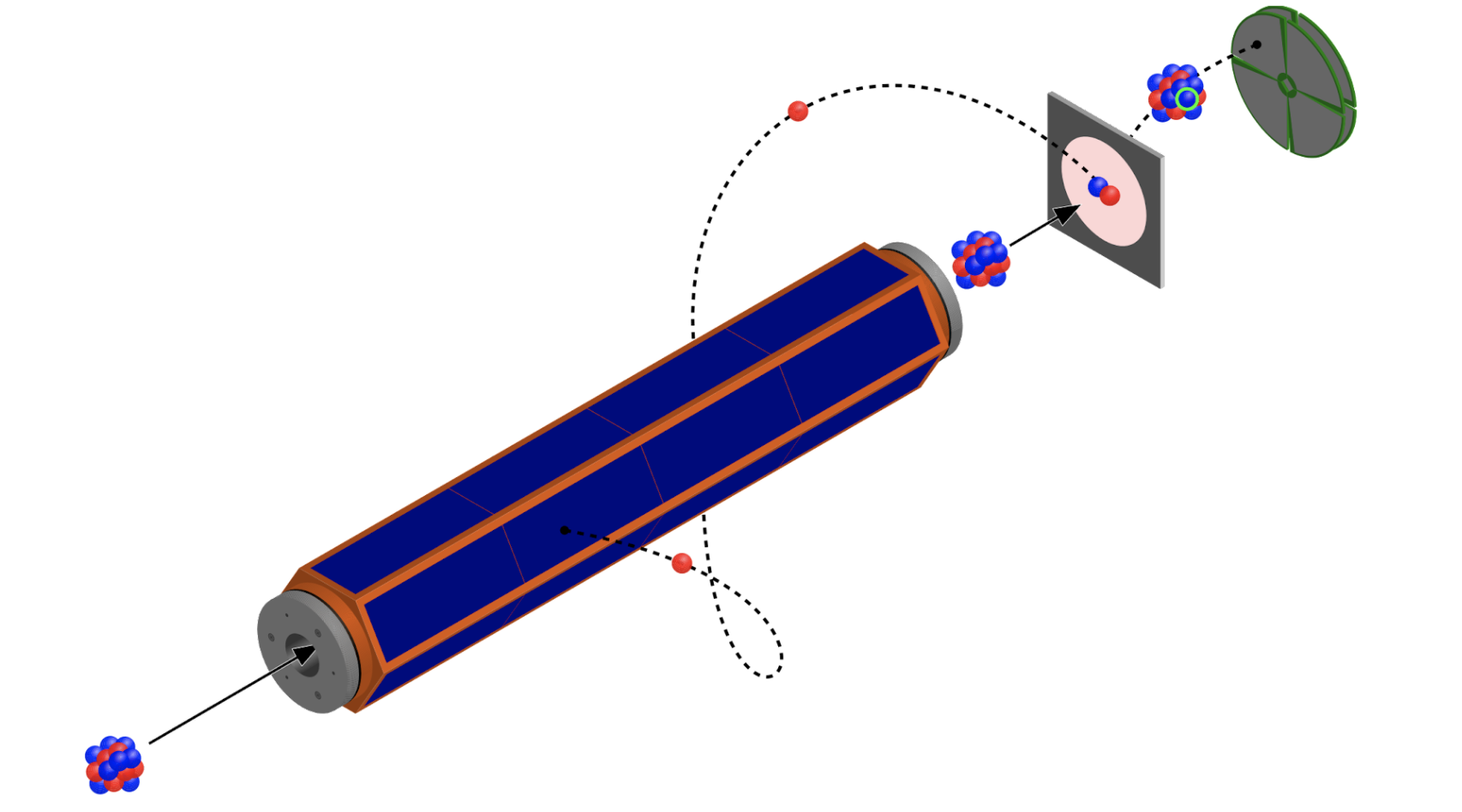 Figure 1. Schematic of the single-nucleon transfer (d,p) reaction within ISS. Radioactive-ion beams are incident through the position-sensitive silicon array. They interact with a deuterated polyethylene target and in the case of this reaction protons are emitted in the backwards laboratory angles. These protons follow helical orbits, returning to the axis after a single cyclotron period, where they are detected by the ISS array and their energy and position of interaction determined. Credit Patrick MacGregor, University of Manchester.

Motivated by the need to address these challenges, a consortium of UK Universities and ISOLDE proposed the construction of the ISS. The solenoidal magnet of the ISS provides a uniform field for analysing the momenta of the outgoing light particles from the reaction. The particles return to the beam axis after a single cyclotron period where their energy and position are measured, see Figure 1. The kinematics of these reactions in a solenoid field has a significant feature; there is a simple linear relationship between lab energy and centre-of-mass energy as a function of z, the distance from the target, which guarantees that there is no kinematic compression. Additionally, the cyclotron period can provide a way of identifying the light-ion emitted since it is characteristic of its mass-to-charge (A/q) ratio.

Additional challenges in studying direct reactions with radioactive ion beams, stem from the presence of potential beam contaminants. A solution lies in detecting the heavy ion recoiling from the reaction, but different detectors are required depending on the mass of the beam. The flexibility of ISS to implement different solutions, depending on the goals of the experiment, add to the strengths of the device. 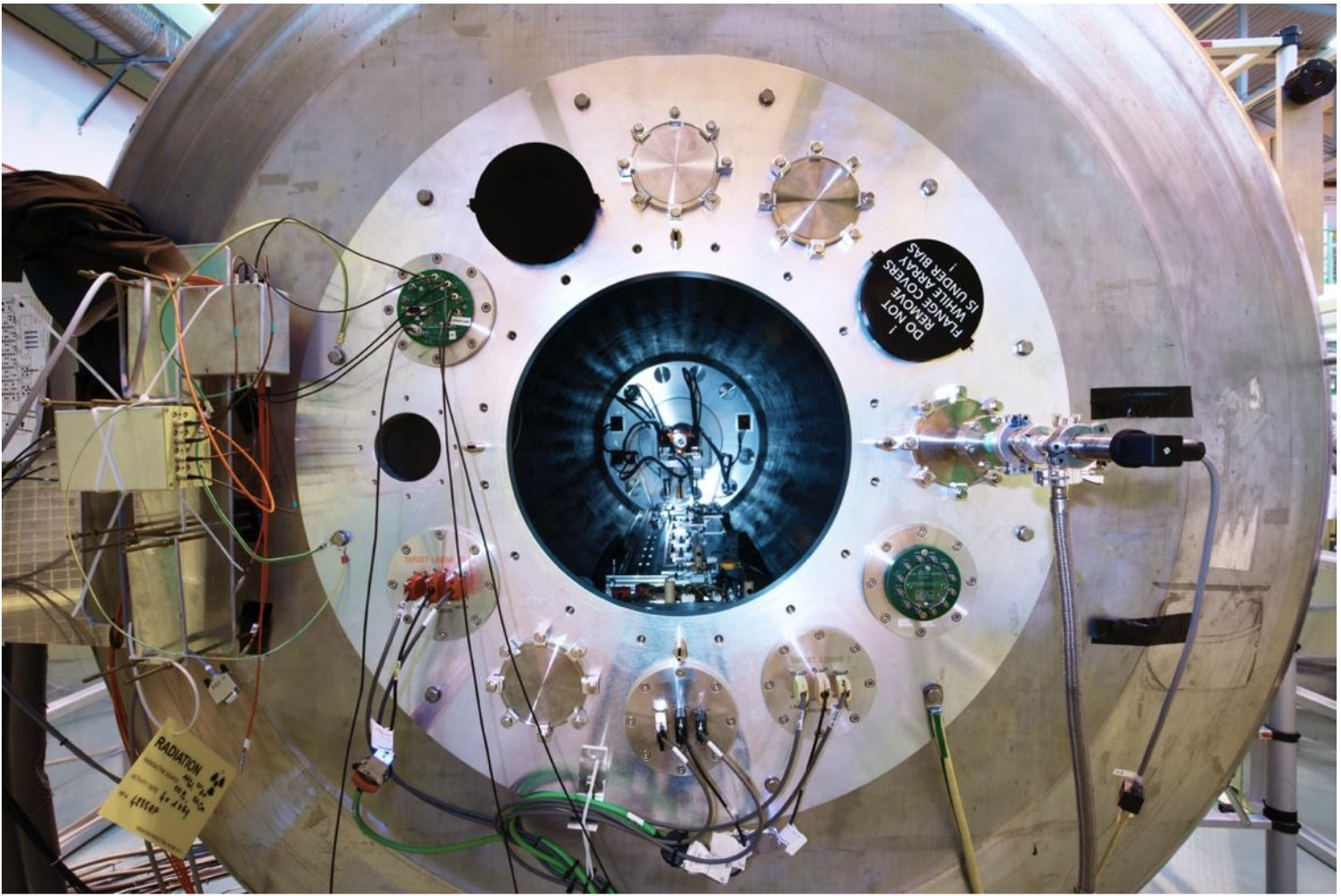 Figure 2. The ISS solenoid magnet has been turned into a vacuum vessel in which the various detectors used in experiments are mounted. Credit Julien Ordan, CERN.

The ISS has been constructed through a collaboration between the Universities of Liverpool and Manchester and STFC Daresbury Laboratory in the UK, KU Leuven in Belgium and ISOLDE. It consists of a 4T superconducting solenoid magnet, formerly used as an MRI scanner in an Australian hospital, shown in Figure 2. This second-hand magnet has ideal field properties for a solenoidal spectrometer but has significant cost savings compared to buying a new bespoke magnet. Inside the bore of the magnet is mounted the ISS silicon array, shown in Figure 3. The magnet support structures were provided by Leuven and allow the magnetic field axis to be aligned to the beam axis. The spectrometer mechanics were designed and constructed at Daresbury; the ISS on-axis silicon detector is mounted on a bed that allows the array-to-target distance to be varied in 50µm steps. Both the array and target carriage can move along the length of magnet to accommodate different reactions. A target ladder, containing multiple targets and tuning accessories (slits, collimators) can be moved in and out of the beam with the same precision.

The ISS on-axis silicon array was designed and constructed at Liverpool, and is shown in Figure 3. It is around half a metre long and consists of double-sided silicon strip detectors that can determine the position of interaction both along the length of the detector and radially, along with the energy of the light particle when it returns to axis. Knowing these quantities allows the excitation energy of the residual nuclear system and the scattering angle for the reaction to be determined. The array is six-sided with four silicon detectors along each side, each with 128 0.95-mm pitch strips along the length of the detector and eleven 2-mm pitch strips along their width. This amounts to a total of 3336 channels which are read out using ASICs. The ISS array has excellent geometric efficiency, with 70% coverage in azimuthal angle and 95% coverage over the centre-of-mass angular range of interest for direct reactions. 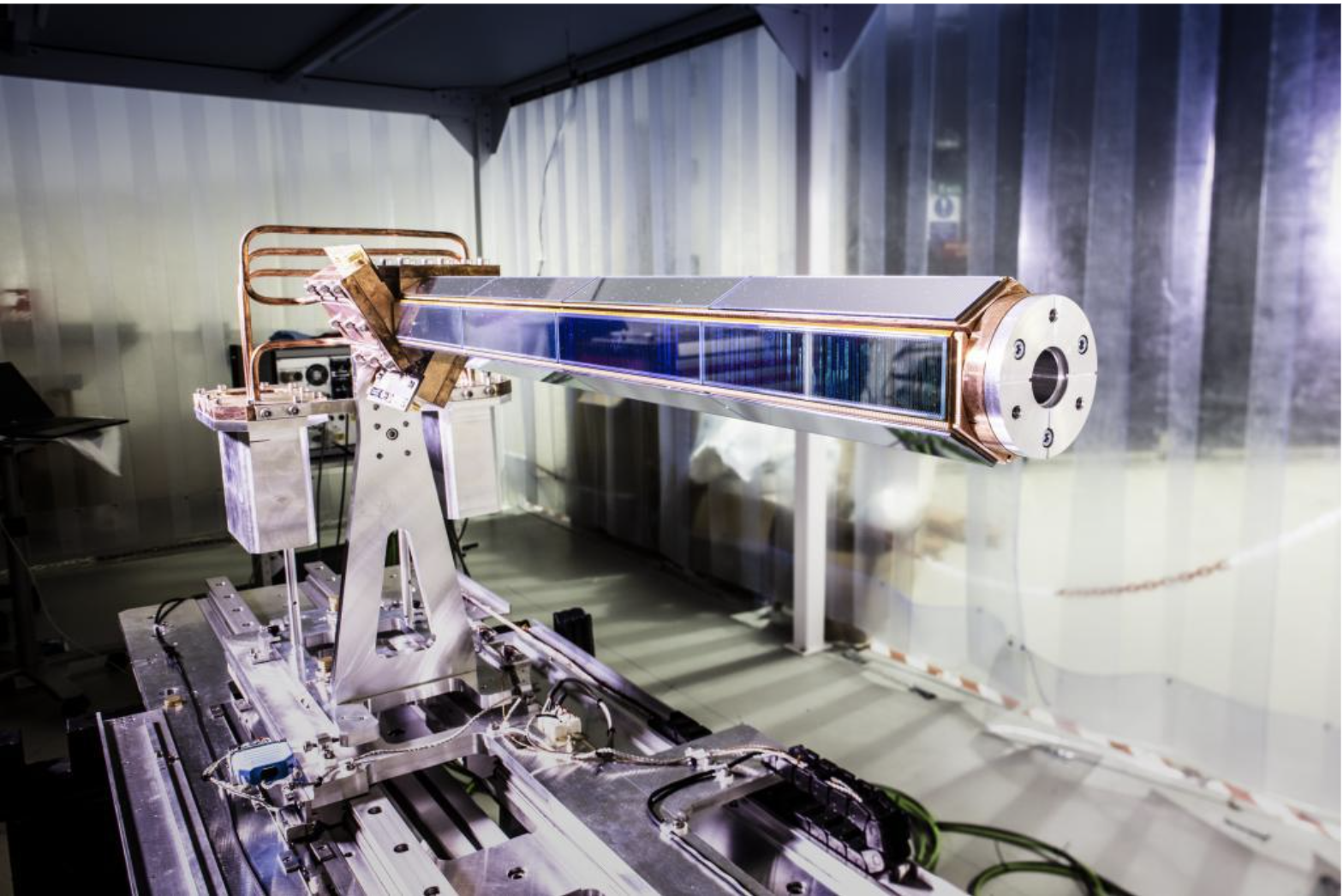 Manchester has provided the various recoil detection solutions for ISS. For light-mass beams (A<30) silicon recoil detectors are used to separate recoiling ions based on their energy loss characteristics in two layers of silicon. For medium-mass beams (30<A<140) a segmented gas-filled ionization chamber will be used, shown in Figure 4, again identifying the ion species by the energy-loss in different segments of the detector. This detector also combines a multi-wire proportional counter (MWPC) that gives the position of interaction and a fast-timing reference. For heavy beams (A>140) there is no current solution available at ISS to remove contaminants so measurements in that mass region are limited to beams which ISOLDE can produce with clean separation from isobaric contaminants, or where laser ionization can be used to identify the correct species in the final spectra. 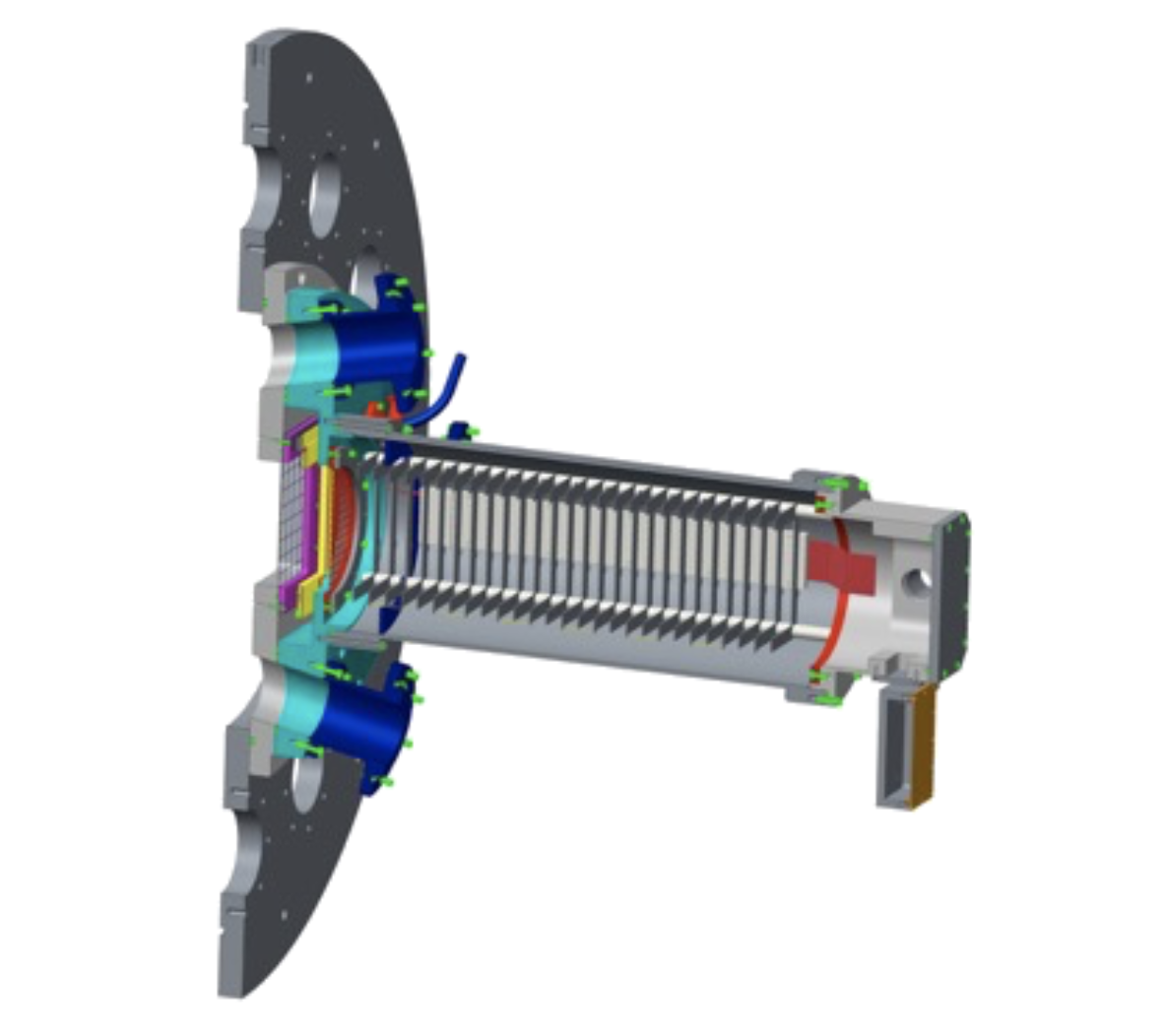 The ISS magnet was sourced by Liverpool from a University hospital in Queensland, Australia and is one of only ten such magnets ever manufactured. The magnet arrived in CERN April 2016 and had the sensing coils (required for NMR imaging) removed and the inner chamber (where a patient would lie during a scan) turned into a vacuum vessel. The superconducting magnet was then cooled and energized, with support from CERN’s cryogenics team, to confirm it was functional early in 2017. The magnet was moved into the ISOLDE Hall March 2017 and was connected to the XT02 beam line after HIE-ISOLDE. This beamline was provided by ISOLDE specifically for ISS and designed to ensure that the beam could be accurately positioned along the magnetic field axis with multiple diagnostic points along the beamline after the last dipole as well multiple sets of steerers and quadrupoles. Beam alignment is vital to obtain the best particle energy resolution in ISS.

Before CERN’s LS2 a short early-exploitation campaign was carried out with ISS. The silicon array from a similar device, the HELIOS spectrometer [1,2] at Argonne National Laboratory, USA, was installed to facilitate two successful physics measurements [3,4]. During LS2 the construction of the new array for ISS was completed and it was installed (see top image). The gas-filled ionization chamber was also delivered to CERN. 2021 marked the commissioning and first physics measurements with the complete ISS system. Several measurements have now been made using a variety of beams from mass 22 to mass 212 addressing a range of different science questions from evolving nuclear shapes through changes in nuclear shell structure to measurements important for producing chemical elements in astrophysical sites in the Universe.

The first physics measurements with ISS have focused on (d,p) reactions, where the ejectile is predominantly emitted backwards in the lab. Future campaigns will also incorporate measurements where the ejectiles are forward going and so require that the silicon-detector array is repositioned downstream. These are more difficult measurements as there are many more reaction channels to separate and so good recoil detection is vital. Additionally, there are plans to study the fission process using transfer reactions to induce fission in short-lived actinide isotopes, both to address questions about fission in astrophysical processes and to obtain important industrially relevant data. This will involve mounting an array of multi-wire proportional counters and Bragg detectors on the rear of the magnet to detect the fission fragments, in coincidence with a proton event coincident on the array.