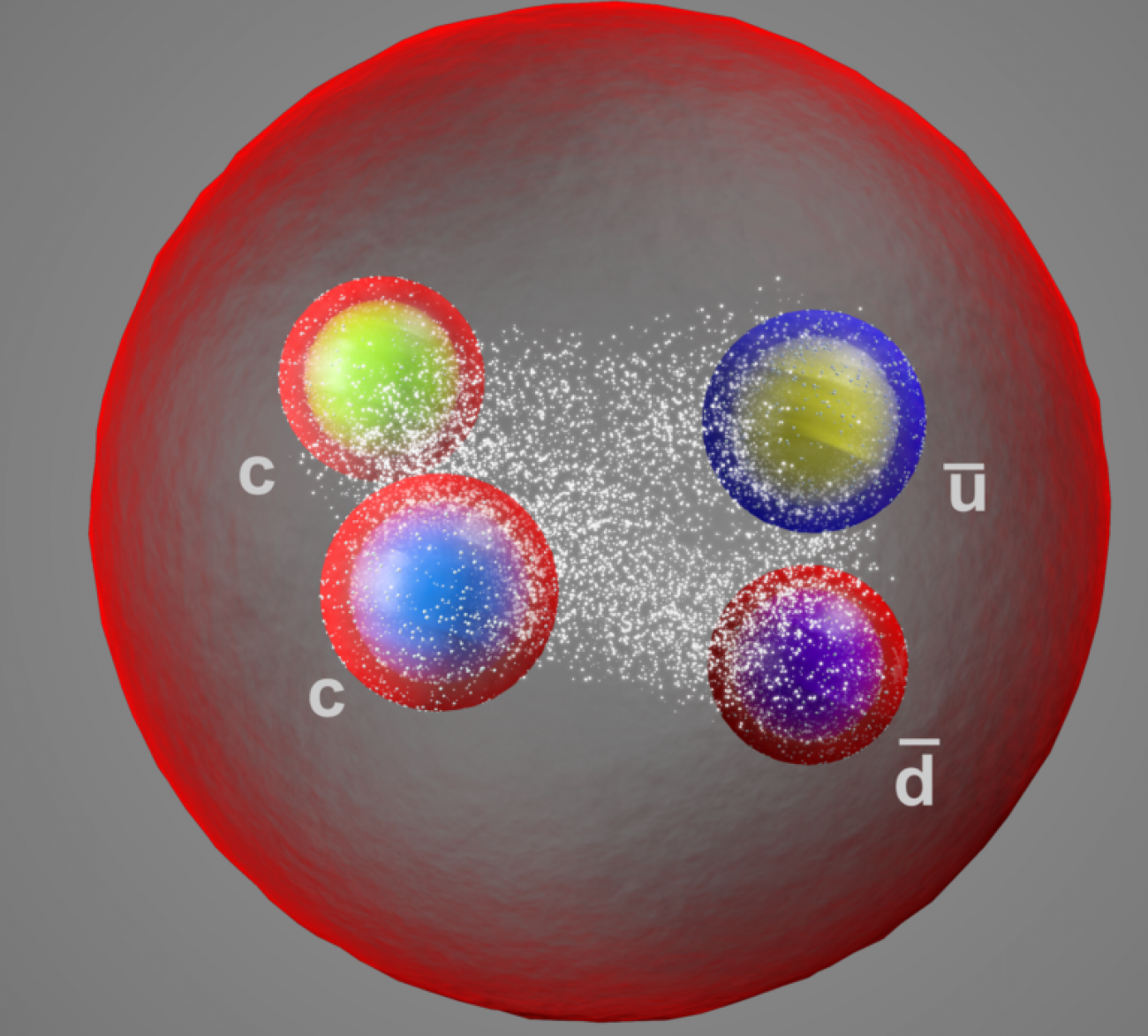 Conventional mesons and baryons consist of a quark-antiquark and three quarks respectively. However, particles with an alternative quark content, known as exotic states, have been actively discussed since the birth of the constituent quark model in 1964. This discussion has been recently revived by observations of numerous tetraquark and pentaquark candidates, including heavy quarks, by the Belle, BaBar, BESIII, CDF, CMS, and LHCb collaborations during 2003-2021.

It should be noted that all the exotic hadrons observed so far decay via quark re-arrangement and their decay widths vary from a few to a few hundred MeV. Given the difficulties associated with experimental measurements and theoretical interpretations, the nature of these states remains unclear while their resonance nature is often debated. Under these circumstances, the discovery of a long-lived exotic state, stable with respect to the strong interaction, would be invaluable. A prime candidate to form such a state is a hadron with two heavy quarks and two light antiquarks. It was shown, that if the ratio of the masses of heavy and light quarks is large enough such a state would be tightly bound. However, until today there is no consensus on whether the charm quark is heavy enough to play this role while the predictions for a mass an exotic hadron with cc quark content varied within ±250MeV around the sum of D*+ and D0 meson masses. Certain theoretical models relate the mass of an object like that with the measured mass of the 𝜩cc++ baryon, previously discovered by the LHCb collaboration. If this relation is valid, the mass of the charm - charm - antiup - antidown (ccūđ object, referred hereafter as Tcc+, should be very close to the sum of D*+ and D0 meson masses.

The LHCb collaboration, using the full data set collected between 2011 and 2018, searched for this exotic particle using the final state D0D0𝜋+. The LHCb detector is very well suited to study this final state due to its powerful flexible software trigger, the excellent momentum/mass resolution, the efficient tracking of charged particle up to very low momenta and superb hadron identification system, unique to LHC experiments,  that allows separation of charged pions and kaons in wide range of momenta, that is crucial for such type of analysis. The power of LHCb detector in reconstruction and selection of events with multiple promptly produced charm particles was demonstrated in 2012, when associative production of two charm hadrons of the same flavour has been observed, and subsequently in 2019, with the observation of a new spin-3 resonance 𝜓3 in the mass spectrum of promptly produced D0D0 and D+D- pairs. The mass spectrum for selected  D0D0𝜋+ combinations, where D0 mesons are reconstructed using their D0⟶K-𝜋+ decay, is shown in the plot below. 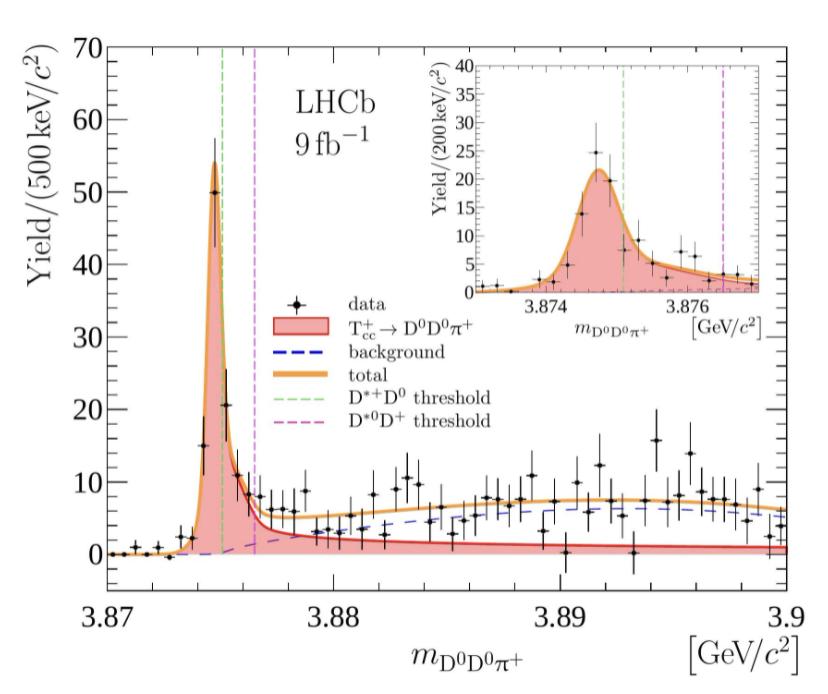 A striking narrow peak is visible on the above plot, located closely to the sum of the D*+ and D0 meson masses, shown as vertical green dashed lines. The peak corresponds to an observation of a new particle with overwhelming statistical significance, well exceeding 20 standard deviations.  The newly observed particle has a minimal quark content of ccūđ and containing two heavy quarks of the same flavor is therefore manifestly exotic, i.e. beyond the conventional pattern of hadron formation found in mesons and baryons. A dedicated decay amplitude model, based on the isospin symmetry, unitarity, and analyticity is used to describe the shape of the resonance. It is also assumed that the quantum numbers of Tcc+ are JP=1+, according to the theoretical expectations for the ground state and its decays via DD* with off-shell D*. The result of the fit with this model is overlaid in the plot - showing a nice agreement between data and the model.

A number of model-independent characteristics of hadronic resonances can be deduced from the reaction matrix element considering the energy of the system as a complex value. In this approach, all the structures seen in the experiment for the physical, real values of the mass find their origin in the non-analytic points of the complex plane: branch points and pole singularities. The branch points correspond to the openings of the decay channels, while the pole-type singularity is an unambiguous sign of the resonance, with the position defining the mass and the width of the state. 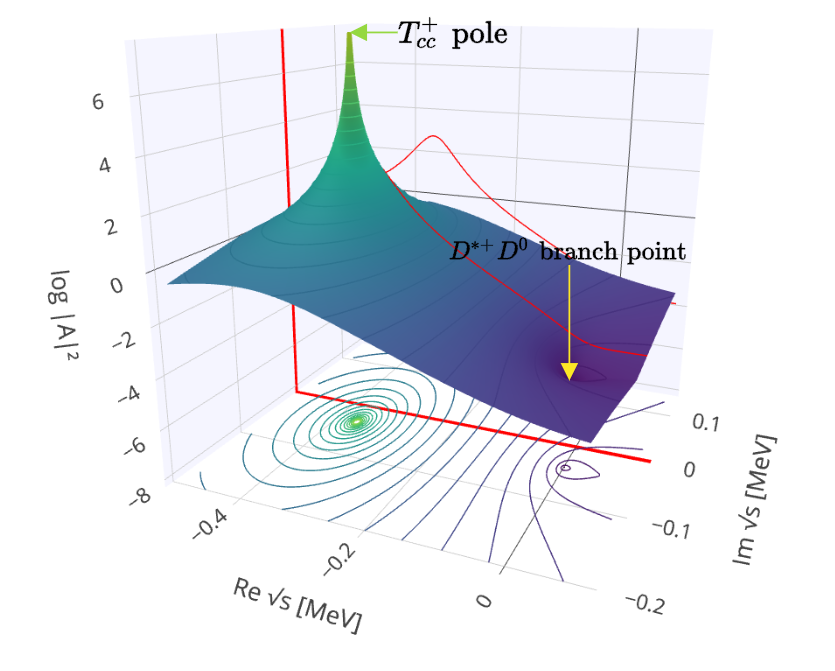 A schematic view of the reaction amplitude squared in the complex energy plane (Click to view 3D plot).

The pole parameters, mass mpole  and width 𝛤pole, are marked with the red circle on the plot below, and the allowed 1-σ and 2-σ regions are shown as colored regions. The pole mass mpole, is the most precisely measured mass of the resonances with respect to the corresponding threshold (a sum of D*+ and D0 meson masses in this case), and the pole width 𝛤pole, corresponds to the exotic particle with the longest lifetime, a factor of 10-1000 larger than those for other exotic particles and even around twice larger than those of the famous J/𝜓 particle.  One can even say that the observed particle is ”a whisker away from stability”.

The study of the D0𝜋+ mass distribution unambiguously shows that the decay of the Tcc+ particle proceeds via intermediate off-shell D*+ meson: Tcc+⟶(D*+⟶ D0𝜋+)D0.  It also provides very strong support for the assignment of quantum numbers. 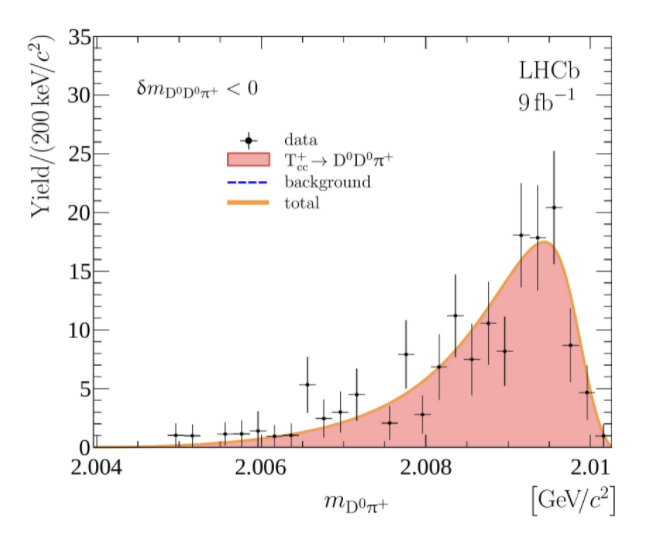 Since the observed Tcc+ state is very close to the D0D*+ threshold its decays to D0D0𝜋+ and D0D+𝜋0 or D0D+𝛾states proceed with small energy release. Therefore, even if a pion or a photon is not reconstructed these decays should produce narrow structures in D0D0 and D0D+ mass distributions near the thresholds. Corresponding peaking structures have also been observed in these final states, in perfect agreement with the decay model which further confirms the assignment of quantum numbers.

Though the theory expectations and observed signals in D0D0 and D0D+ final states speak towards the isoscalar nature of the observed Tcc+ state, we have investigated the possibility of its isotriplet interpretation. In that case the doubly-charged partner should exist with a mass above D+D*+ threshold and therefore its decay to D+D*+ will produce near-threshold structures in D+D+ and D+D0𝜋+ distributions. These channles have also been explored and no signal contributions have been found thus further supporting the isoscalar nature of the observed Tcc+ state.

Being that close to the D0D*+ threshold, the  Tcc+  particle shows resemblance with the 𝜒c1(3872) exotic state. Therefore one can expect similarities in their production properties. The 𝜒c1(3872) production is suppressed in events with high track multiplicities, as recently found by the LHCb experiment.

As an additional step, we compared the Tcc+  production yield distribution over track multiplicity with that of low-mass D0D0 pairs and low-mass D0D0 pairs. No suppression of Tcc+ production at high multiplicities has been observed with respect to D0D0 pairs, which are dominantly produced in pp⟶ccX process. In contrast, the corresponding distribution resembles that of the D0D0 pairs. Such similarity between Tcc+ production, which is inherently a single parton scattering process, and the distribution for a process presumably dominated by a double parton scattering is remarkably surprising. The production dependence on transverse momentum was also studied, however, limited statistics do not allow draing clear conclusions. 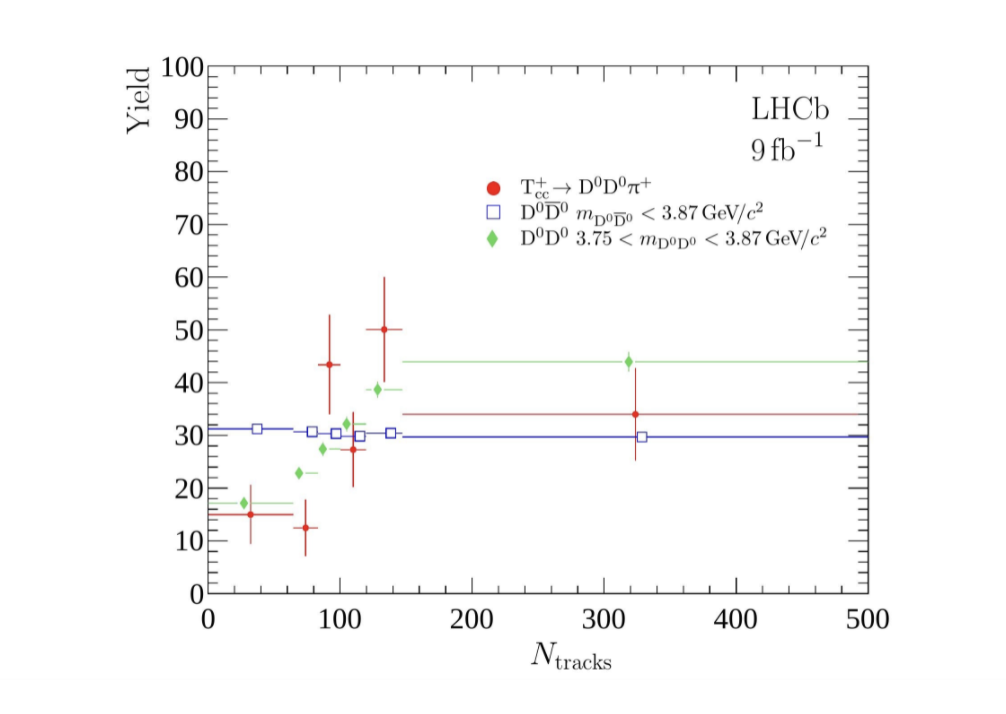 All in all, the observation of the doubly charmed tetraquark by the LHCb experiment opens a novel class of hadron states. The unprecedented precision of its mass measurement will constrain theory models describing hadron states and will possibly allow getting deeper insight into their internal structure and strong interaction. The existence of the Tcc+ state itself supports theory expectations for the tightly bound and long-lived doubly beauty tetraquark. Moreover, the position of the mass peak fraction of MeV below D0D*+ threshold advocates towards long-lived Tbc tetraquark according to some theoretical models.Thus, making the dream to observe long-lived exotic states even closer. In the future, with larger statistics of Run 3&4 of LHC, it will be possible to finally observe these states. In addition to that, larger statistics will allow us to perform a full Dalitz analysis of the Tcc+⟶D0D0𝜋+ decay and thus finally confirm isoscalar nature and 1+ quantum numbers assignment. On the other hand, studies of its production cross-section and further investigation of its intriguing dependence on multiplicity and transverse momentum will reveal even more information on its nature and hence provide one more piece to a puzzle of strong interactions.