The many faces of ISOLDE

You will stand across the street from the ISOLDE facility, when visiting CERN’s medical center, fire fighters, raw materials store, transport teams, or goods reception service. Located centrally at the Meyrin site (https://videos.cern.ch/record/2243399), ISOLDE has been the longest running CERN research facility, approved in 1964, connected to the synchrocyclotron (SC) in 1967 and to Proton Synchrotron Booster (PSB) in 1992, after it had moved into the present building, see Fig. 1.

ISOLDE is CERN’s facility for the production and studies with unstable nuclei [Bor18]. Thanks to the long-time experience and continuous technical developments, until now it has provided to users beams of over 1300 different isotopes belonging to around 80 chemical elements. This corresponds to one third of all isotopes discovered until now and two thirds of known chemical elements. The beams are provided at a low energy of 30-60 keV or post-accelerated to 1-10 MeV/nucleon using the HIE-ISOLDE accelerator [Kad17] (https://videos.cern.ch/record/2069149). This richness explains the large number of CERN users that come to perform experiments at ISOLDE, which reaches 1000 in recent online periods.

ISOLDE’s research topics are as versatile as the beams that the facility can provide. They cover of course nuclear structure and reaction studies, but also fundamental interactions, astrophysics, condensed matter physics and material science, and even biology and medicine. The latter topic is also covered by a recent ISOLDE spin-off, MEDICIS (https://home.cern/science/experiments/medicis). Different observables are at hand to answer open questions in these fields: nuclear ground state properties in the form of masses, radii, spins, and electromagnetic moments) or excited-state properties, namely emitted radiation, lifetimes, spins, parities, excitation and decay probabilities, and reaction cross sections.

To address the above topics, researchers use a wide range of experimental setups and techniques, many of which have pioneered for radioactive ion beams at ISOLDE. To these belong: laser spectroscopy, mass measurements in traps, Coulomb excitation, or radiation-detected nuclear magnetic resonance, perturbed angular correlations, emission channelling, and many more. This wealth of observables, topics, and techniques is summarised in Fig. 2. 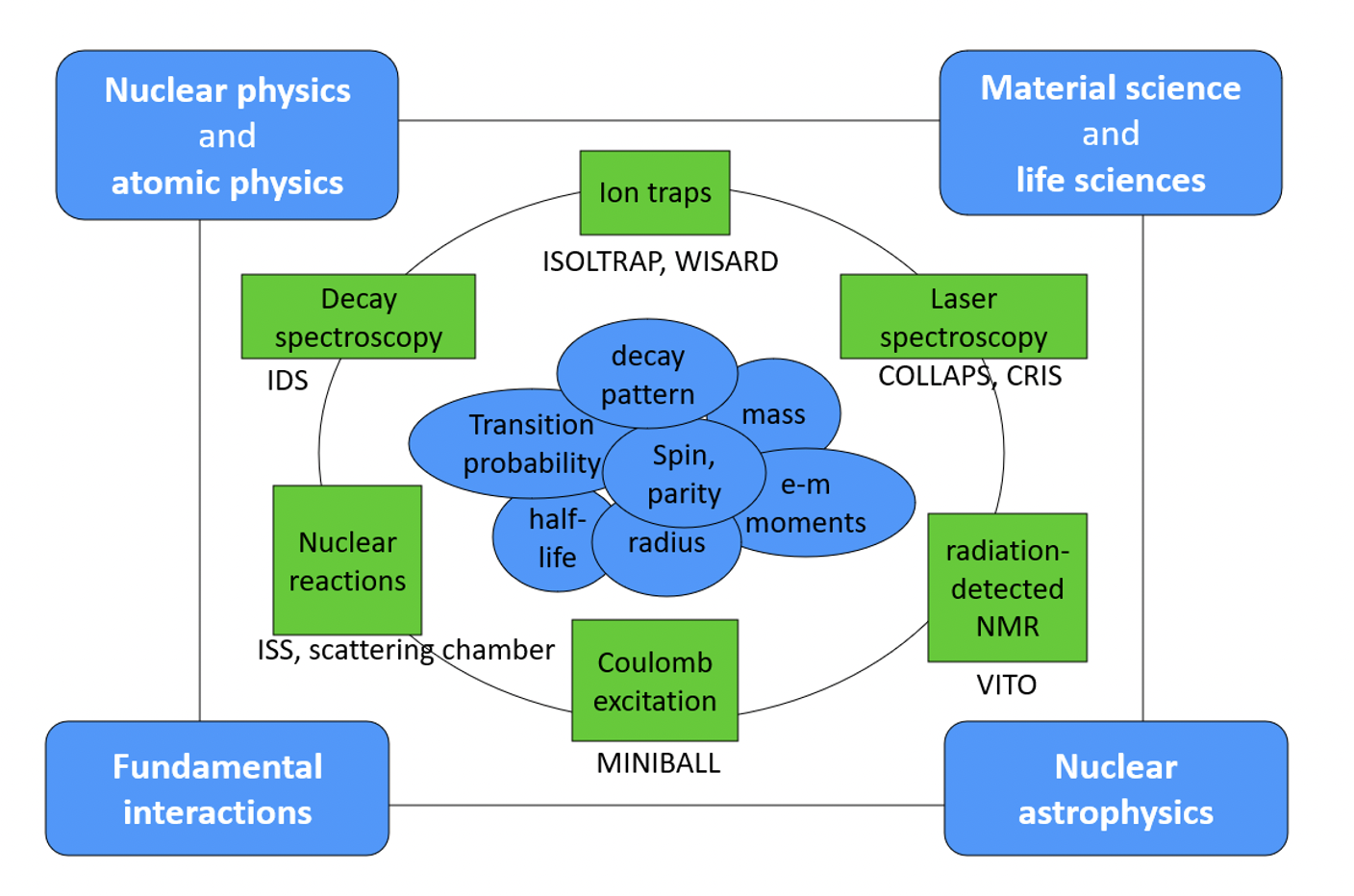 ISOLDE has stayed at the forefront of research with radioactive ion beams due to ongoing developments in beam production and in experimental techniques (many of which have been exported to other facilities worldwide), and a close collaboration with theoretical groups. This combination has allowed to investigate ever more challenging nuclei and to answer more challenging questions. The physical closeness of different experimental setups/techniques (Fig. 3) furthermore allows to create synergies that strengthen ISOLDE’s uniqueness. One of most recent examples of technique development and synergies between setups is the multireflection time of flight spectrometer (MR-TOF), which is a fully electrostatic trap that within 40 ms can distinguish nuclear states differing by only 200 keV in mass. Since the device was added to the ISOLTRAP setup around 10 years ago (https://home.cern/news/news/experiments/new-ion-trap-extends-reach-nuclide-mass-experiment), it has already allowed measuring masses of very short-lived and weakly produced nuclei, and quantifying the isobaric composition of ISOLDE beams in experiments taking place at other ISOLDE setups. Soon, another MR-TOF spectrometer will be used for the 1st time to perform laser spectroscopy on unstable nuclei (MIRACLS project), where the same ion will interact multiple times with the laser light, thus highly increasing the signal to noise ratio.

Fig. 3. ISOLDE experimental stations, with many synergies brought by their physical closeness.

Another new type of setup is the Isolde Solenoidal Spectrometer (ISS), devoted to nuclear reactions with beams post-accelerated by the HIE-ISOLDE linac. The experiment uses a re-purposed human MRI magnet that was shipped to CERN from an Australian hospital. At ISS, light charged particles emitted during the nuclear reactions are transported with high efficiency by the solenoidal magnetic field to an array of position-sensitive silicon detectors mounted on its axis. Measuring the particle energies and interaction positions in the silicon array allows the reaction energy to be determined without the problem of kinematic compression encountered in more conventional approaches, thus allowing reaction studies relevant for example for nuclear astrophysics.

My own experimental setup (VITO) is one of the newest additions to ISOLDE. It is devoted to spin polarisation using lasers and to versatile studies using the asymmetric emission of beta radiation from polarised unstable nuclei. Since April this year it includes a re-purposed animal MRI magnet that was not needed anymore in Zurich. One of the applications of the setup concerns the unitarity of the CKM quark mixing matrix [Vel13], while another – very sensitive NMR studies aiming to understand the interaction of metal ions with DNA [Kar20]. We furthermore use asymmetric gamma decay to develop a new medical diagnostic modality that uses polarised long-lived Xe states (gamma-MRI project).

Finally, soon a trap enclosed in a superconducting magnet and filled with antiprotons captured at the AD facility will be travelling to ISOLDE in order to measure the annihilation rates on unstable nuclei (PUMA project). The motivation here is to determine the difference in proton and neutron distribution in different short-lived nuclei with the aim to probe their fine details of the nuclear force.

A lesser-known facet of ISOLDE physics concerns the tests of fundamental forces, especially the weak interaction [Sev17]. Here, permanent setups (WISARD, ISOLTRAP, VITO) and travelling experiments work on providing accurate values of nuclear masses, lifetimes, decay probabilities, mixing ratios of different decays for super-allowed and mirror decays, as summarised in Fig. 4. These can get combined with theoretical corrections and result in the value of the Vud element of the CKM quark mixing matrix or provide limits on terms in the weak-interaction Lagrangian which go beyond the standard model, like scalar currents [Gon19, Ara20].

A new branch of fundamental studies is also gaining momentum at ISOLDE, namely precision studies on unstable molecules, which are interesting for example to search for electric-dipole moments (EDM) or anapole moments in nuclei [Gar20]. Here, radium fluoride molecules have been shown by several ISOLDE experiments to be suitable candidates for such studies, based on their high Z, octupole deformation present in several isotopes (using MINIBALL setup [Gaf13, But19]), and transitions which allow laser cooling (CRIS setup) [Gar20].

Fig 4. Types of precision and new physics studies at ISOLDE (middle, blue), with the observables (green) and experimental techniques (yellow) that allow to address them (https://indico.cern.ch/event/1032392 ).

Another growing area of ISOLDE studies concerns applications in life sciences. This is because unstable nuclei offer the advantage of their efficient detection through decay radiation, which can also be used to cause localised damage to malicious cells. Among these, beams of cadmium, lead, or mercury isotopes are used to study the heavy metal toxicity [Vib12,Jan17]. ISOLDE and MEDICIS-ISOLDE (https://cerncourier.com/a/medicis-shows-its-strength/)  produce also new isotopes to be used in nuclear medicine for combined diagnosis and treatment (theranostics). The best example is provided by several terbium isotopes, among which several can be used as a PET-tracers for cancer localisation, while another can be used for alpha-particle therapy. My own setup [Kow18,Har20] is aimed at investigating the interaction of metal ions with different biomolecules, starting with alkali-metal and DNA complexes [Kar20]. Finally, a European project, in which my team is a partner, aims at developing a new medical diagnosis modality, based on Magnetic Resonance Imaging on polarised gamma-emitting excited states in several xenon isotopes (https://cordis.europa.eu/project/id/964644).

In the nearest future, during Run 3 (2021-2024), the ISOLDE researchers will aim at using the full potential of the low energy experiments and of the HIE-ISOLDE accelerator, which reached its nominal energy in 2018. During LS2 many permanent setups have undergone major upgrades, while new experiments will soon appear in the experimental hall (e. g. MIRACLS and PUMA traps). The collections area, used mostly for material science, biology, and medical isotope production) has been also optimised.

Following these upgrades, the 2021 running period has already seen a number of scientific highlights, including studies of the energy of the isomeric transition in thorium-229 [Kra20], which is a candidate for a nuclear clock. ISOLTRAP improved its mass separation performance, allowing the first mass measurement of indium-99 isomer. In addition, other Indium ground and isomeric states were remeasured at higher sensitivity, confirming previous results in press [Mou21]. The new particle detector for ISS was used to understand nuclear-structure aspects of magnesium isotopes that drive changes in nuclear shape, with first HIE-ISOLDE beam after LS2. Many other results are following.

In the medium term, until 2025, the ISOLDE technical teams are studying possible consolidations and improvements to maintain the facility as the worldwide reference, including potential options to profit from the injector upgrades in energy and intensity that have happened within the LIU project, with Linac4 at its centre. If these upgrades will be realised, the production cross-section could increase for many unstable nuclei, translating into higher intensity (up to factor 40) for existing beams and new beams of nuclei further away from stability. The consolidation mainly means the refurbishment of ISOLDE beam dumps (with the design phase already funded) and changes in the ISOLDE target design (in the design phase) as the use of Nanomaterial for target production in a dedicated new laboratory. In addition, paralell operation, with beams produced at both target stations is being explored.

Long-term, after 2025, the ISOLDE-EPIC proposal takes shape. It is motivated by the needs of the growing ISOLDE community, and it aims at Exploiting the Potential of ISOLDE at CERN (thus the name, EPIC). It encompasses the proposal for a new ISOLDE building and target stations, dedicated space and facilities for new and existing low-energy experiments, as well as an improved beam purity -thanks to higher mass resolution- and quality (i.e. better time structure). Parallel operation with existing (HIE-ISOLDE) facility is foreseen within the proposal and so is space for new re-accelerated beam experiments is foreseen, including a new compact storage ring. Different aspects of the proposal have been discussed at two workshops [EPI19, EPI20], and the motivation behind the project and its different elements are being outlined in a long article that is presently under preparation. The upgrades can be staged and can take place over the coming yearly and long shutdowns.

With these upgrades and plans, ISOLDE hopes for a bright future ahead.

For a recent collection of ISOLDE research topics, see: